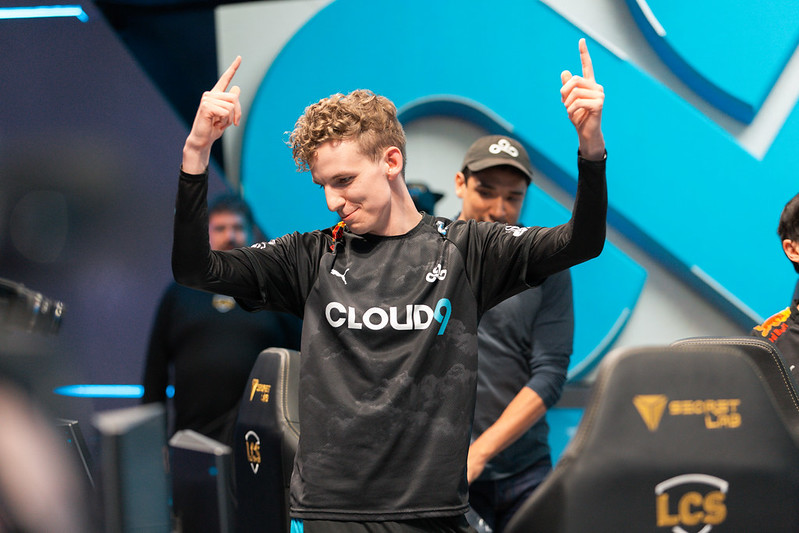 Cloud9 had no trouble with dispatching 100T in a 3-0 win. (Photo courtesy Oshin Tudayan - Riot Games)

As a result of their regular season dominance, Cloud9 were afforded the opportunity to choose their Round 1 opponent in the 2020 LCS Spring Split playoffs. They chose the third seeded 100 Thieves over the fourth seeded FlyQuest.

That turned out to be a fine decision for C9, as they decisively swept 100T 3-0 to advance to Round 2 of the playoffs. 100T will now have to fight their way through the Loser’s bracket to continue their season.

The Cloud9 dominance started early in game one. C9 swept the First team All-Pro vote, but Kim “Ssumday” Chan-ho came the closest to his C9 peer, losing by only 21 points to Eric “Licorice” Ritchie. Licorice showed why he won out by picking up First Blood to open the series. In a disadvantageous early matchup, Licorice’s Ornn solo killed Ssumday’s Gangplank at four minutes.

Things didn’t get any better for 100 Thieves. Robert “Blaber” Huang’s Nocturne used his first ultimate bot to donate two kills to Jesper “Zven” Svenningsen’s Aphelios. C9 then regrouped to slay the first Ocean Drake and pick up three kills on the unfortunate 100T members who contested.

After a pick on Tommy “Ryoma” Le led to another kill on William “Meteos” Hartman in 100T’s top jungle, C9 took an uncontested Baron at 21 minutes to snowball to a 5k gold lead. Licorice’s Ornn items meant that the effective gold lead was even larger for C9.

C9 opted for a 2-2-1 split push at 27 minutes to pressure 100T. 100T responded by sending all five members top to try to catch out Yasin “Nisqy” Dinçer’s Zoe and Blaber, but they stalled as long as they could while the rest of the team continued to push. C9 pushed down mid inhibitor, dove Ryoma under the double Nexus turrets, and ended the game without issue. C9 were up 21 kills to 3 as the Nexus fell at 28 minutes. Nisqy finished a perfect 8/0/5 on Zoe with 22 Mejai’s Soulstealer stacks.

It’s impossible to ban out a team as talented as C9, but 100T may question their decision to leave Zoe up for Nisqy again. After a great performance on her in game one, Nisqy showed up with an even better showing in game two.

It started when Ssumday’s Aatrox overextended early to try to catch Blaber’s Kindred on his Krugs. Blaber was healthy enough to escape with his jump, allowing Nisqy to use his lane advantage to roam up. Nisqy hit his Paddle Star on Ssumday for First Blood to start his snowball.

Hey @lolesports, can we bring FFs back? @Nisqylol is going ham in Game 2 as he gets a Triple Kill on Zoe! #C9WIN

A top lane skirmish at 11 minutes netted Nisqy another four kills, including a double kill on Ryoma’s Syndra and William “Stunt” Chen’s Braum with a single Paddle Star. At the end of the fight, Nisqy was already 5/0/0 and C9 were up 5.7k gold before 12 minutes. Against one of the best teams in LCS history, the game was essentially already over. C9 picked up their first two inhibitors in under 19 minutes.

An uncontested Baron at 21 minutes facilitated the final push for C9. A one-for-one fight at the inhibitor forced 100T back to heal while C9 and their waves of super minions cracked the Nexus turrets. C9 turned their focus off the Nexus to clean up the remaining members of 100T to pad their stats, as usual. C9 won 14 kills to 3 in 22 minutes to set up match point. Nisqy finished with another perfect game, this time going 7/0/4.

After stomping the first two games, C9 shook things up in the draft. Licorice finally got off Ornn duty and was given the final counter pick of the game. He pulled out Hecarim, one of the old counter picks to Aatrox that isn’t often seen anymore. What better time to break out a pick he hasn’t played all season?

Even though C9 had been beating 100T straight up with ease, that didn’t stop them from breaking out the cheese to begin game three. All four members but Licorice sat in the C9 bot lane brush to pounce on 100T. Stunt was the unlucky member to step too far, resulting in a CC chain of Pantheon’s stun into Zoe’s bubble. Zven was the lucky recipient of the easy First Blood at 45 seconds.

100T actually took the next three kills of the game, catching out Licorice and Blaber twice to pick up a small early lead at ten minutes. But it wouldn’t last for long.

C9 found a pick on Stunt to take Cloud Drake, Licorice basically solo killed Ssumday top lane (with a late kill steal from Blaber), and a four-man dive bot netted C9 another two kills. In a flash, C9 were back in control of the game with a 1.5k gold lead at 15 minutes.

100T were pushed too far away from their mid turret at 27 minutes, allowing Blaber to ult in behind them. He and Zven instantly picked off Cody Sun’s Aatrox and Stunt’s Tahm Kench. With those picks, C9 picked up a free Baron. The surviving members of 100T rushed Ocean Drake to deny C9 the Soul, but Licorice teleported behind them to force a fight. Cody Sun and Stunt died just as they returned, giving C9 a chance to push 100T’s base.

One more catch from Blaber’s ult on Meteos was enough for C9 to close the series. C9 won game three 18 kills to 6 in 31 minutes to advance to Round 2. Nisqy finished with his third consecutive deathless game on Zoe (4/0/12) to earn series MVP.

Congratulations to @Nisqylol on winning Player of the Series for the round one 2020 #LCS Spring Playoffs series between @Cloud9 and @100Thieves! #LCS #C9WIN pic.twitter.com/Xhtjcq4PVv

Cloud9 advances to Round 2 of the playoffs, where they will take on day one winner Evil Geniuses. 100 Thieves drop to the Loser’s bracket and will take on TSM in an elimination match.

Day three of the playoffs features a matchup between FlyQuest and Golden Guardians. The elimination match will take place on Tuesday, April 7th at 1 p.m. PST.