LCK Week Two: The Return of Smeb to KT Rolster 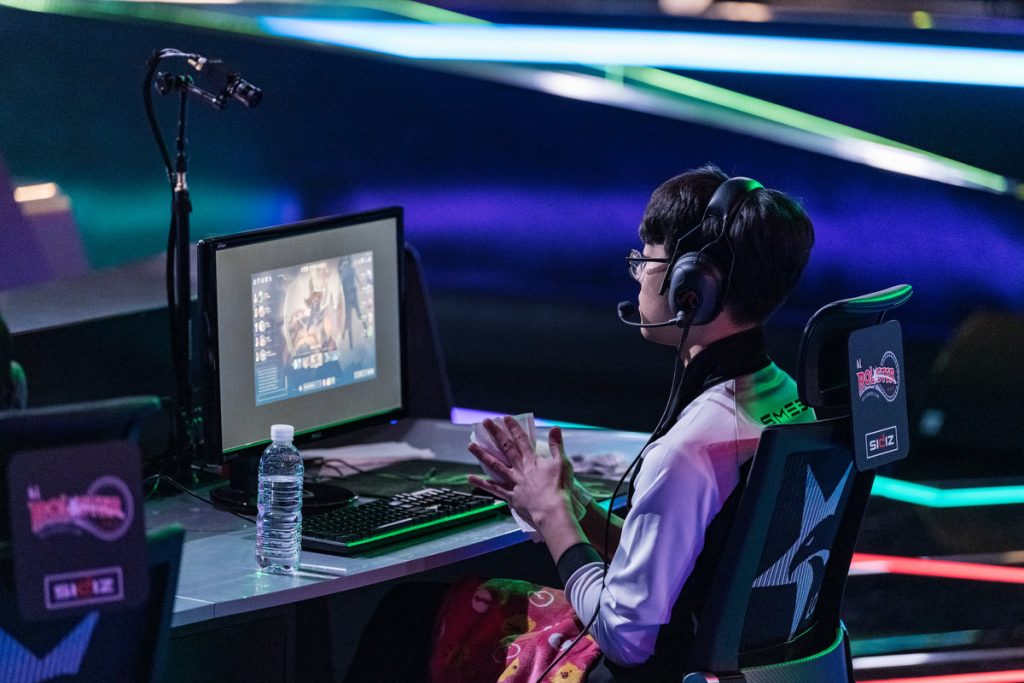 The League of Legends Champions Korea (LCK) completed their second week of the 2020 Summer Split. Song “Smeb” Kyung-ho returned to KT Rolster’s starting lineup as they picked up their first win of the season. Meanwhile, Korea’s big three all had a 2-0 week. We take a look at where things stand in the LCK by looking at the top story lines so far in Korea.

SoHwan got the first start of the new season in the loss to Team Dynamics, but Smeb has gotten the start in the last three matches for KT Rolster. In week two, Smeb turned back the clock against Hanwha Life Esports to help KT pick up their first victory of the season.

With the aid of jungler Kim “bonO” Gi-beom, KT Rolster picked up First Blood in the opening game on Lee “DuDu” Dong-ju’s Aatrox. With the early head start, Smeb got his Lethality Jayce build online early. Though he picked up only one kill, his 30.2k damage to champions led KT Rolster. Smeb’s poke helped KT Rolster take game one despite the kills being tied at eight apiece.

But game two was where Smeb really popped off. Playing Mordekaiser, a champion that so many others have struggled to use effectively, Smeb had no issues. He joined in team fights, using his ultimate to isolate priority targets while Kim “Aiming” Ha-ram’s Ezreal poked with Mystic Shots. Smeb finished 8/1/7 to earn game MVP.

In an otherwise disappointing start to the season for KT Rolster, it’s been nice to see Smeb get another shot after his disastrous 2019. He can clearly help the Spring playoff team, though they will need a better performance from bonO if they want to make it back. The good news for KT is that they started similarly slowly to begin Spring before going on a long win streak to get back in playoff position.

KT has matches against SeolHaeOne Prince and Afreeca Freecs in week three.

There were a clear big three in the Spring Split: T1, Gen.G, and DragonX. While DAMWON Gaming and Team Dynamics have shown signs of challenging that hierarchy, the big three are still looking like the best in the LCK. All three teams went 2-0 in week two to stay at the top of the standings.

DragonX remains the only undefeated team in the league after beating SANDBOX Gaming and Afreeca Freecs. DRX actually dropped a game to SBX to give them their first game win of the season, but the other two were comfortable wins. DRX then took care of AF in a 2-0 sweep. Game one was an easy 17 kill to 3 win in 34 minutes, but AF led by as much as 4.5k gold in game two before DRX came back late. With wins over T1 and Gen.G in week one, DRX are still the top dogs in the LCK.

T1 also played Afreeca Freecs and SANDBOX Gaming in week two, though T1 dropped a game to AF instead. AF led game one from start to finish, but T1 came back with a dominant 21 kill to 1 game two win. T1 were also never threatened in a fast-paced 28 kill to 13 win in the finale. SB were no match for T1, falling 0-2. At 3-1 T1 are tied with Gen.G on game record behind DragonX, DAMWON Gaming, and Team Dynamics.

Gen.G picked up their week two wins over DAMWON Gaming and SeolHaePrince One. Gen.G split the first two games against DWG, setting up for a pivotal game three. DWG controlled the action for the first 20 minutes, but a five-for-zero team fight for Gen.G turned the game around. They’d go on to win 11 kills to 6 in 28 minutes. Gen.G then led SP from start to finish in both games to pick up a quick 2-0 in 28 and 26 minutes of game time.

There should be more clarity at the top of the standings after week three. T1 takes on DAMWON Gaming and Gen.G, while DRX has a tough match against Team Dynamics.

Hanwha Life Esports struggled to a 6-12 Spring Split, but there were still reasons for positives heading into the Summer Split. HLE beat Gen.G in one of their final matches of Spring, giving them some momentum heading into the break. They also signed former Griffin ADC Park “Viper” Do-hyeon, reuniting him with Son “Lehends” Si-woo. Considering that HLE were running a converted support player at ADC for the majority of Spring, that was easily the biggest individual upgrade of the break.

However, HLE also made a few other unanticipated changes to begin the Summer. Lee “CuVee” Seong-jin was benched for top lane trainee DuDu, Kang “Haru” Min-seung was benched for jungler trainee Cho “CaD” Seong-yong, and mid lane substitute Jeong “Mireu” Jo-bin has already started three games over Kim “Lava” Tae-hoon. After signing so many veterans in the off-season and then bringing on Viper after Spring, it was surprising to see HLE give so much stage time to the trainees.

That decision has not paid off in the win column. Hanwha Life are now 0-4 on the season, only clinging to ninth place based on an extra game win. And now, after starting so poorly, Hanwha Life reinserted CuVee and Haru back into the starting lineup against Team Dynamics in week two.

HLE still lost, but the decision is even more curious. Generally, you see teams sprinkle in their young players throughout the season after giving the veterans the respect of opening in the starting lineup. It also makes sense to turn to the young players as you fall out of contention in the standings. In this case, HLE opened with their young players, lost a bunch of games, and are now turning to their veterans before the season spirals out of control. It’s a long season, but 0-4 is already a big hole to dig out of, especially when you consider that the LCK only sends five teams to the playoffs.

HLE needs to pick up wins fast. They have tough matchups against Afreeca Freecs and DAMWON Gaming in week three. 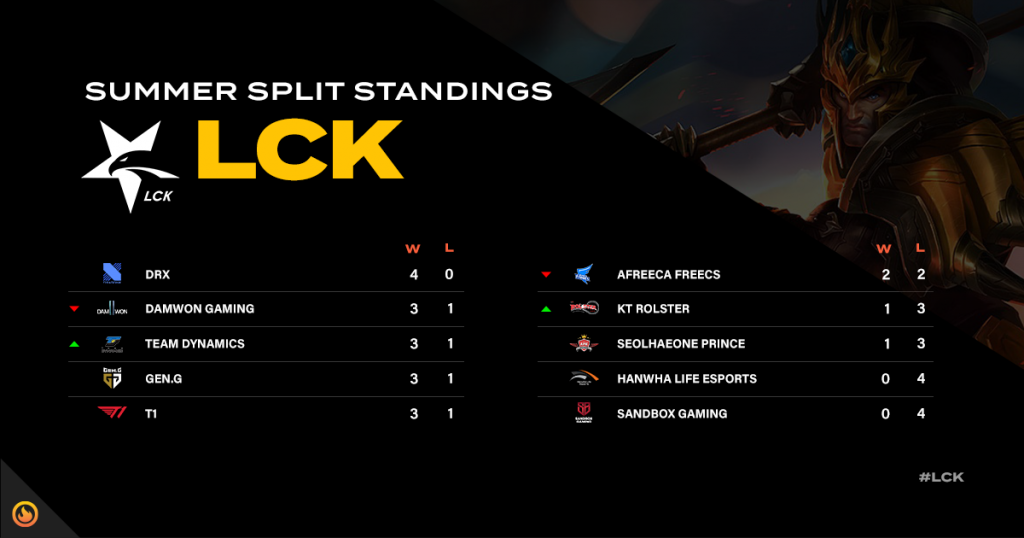 Both SANDBOX Gaming and Hanwha Life Esports are 0-4 and still searching for their first win. Afreeca Freecs dropped both games in week two to drop to 2-2 after starting 2-0.

Team Dynamics has taken care of their matches against the bottom of the league, but now we’ll get a chance to see the newest LCK team take on one of the best. DragonX won’t be overlooking TD after their 3-1 start to the season. TD likes to get top laner Lee “Rich” Jae-won a good matchup, so it wouldn’t be surprising to see Hong “Pyosik” Chang-hyeon pathing top early. Kim “Deft” Hyuk-kyu and Ryu “Keria” Min-seok won’t be struggling with any bot lanes in the LCK.

A rematch of the Spring Finals that T1 dominated in a 3-0 sweep. Gen.G could never solve T1’s scaling poke compositions in the series, so we’ll see if T1 go for a similar draft in game one. Gen.G actually had the better performance at the Mid-Season Cup, but both are off to similar starts in the LCK. Gwak “Bdd” Bo-seong will need a redemption series against Lee “Faker” Sang-hyeok for Gen.G to pull off the win this time. T1 remain the favorites until Gen.G can prove they can take a series off the reigning champs.