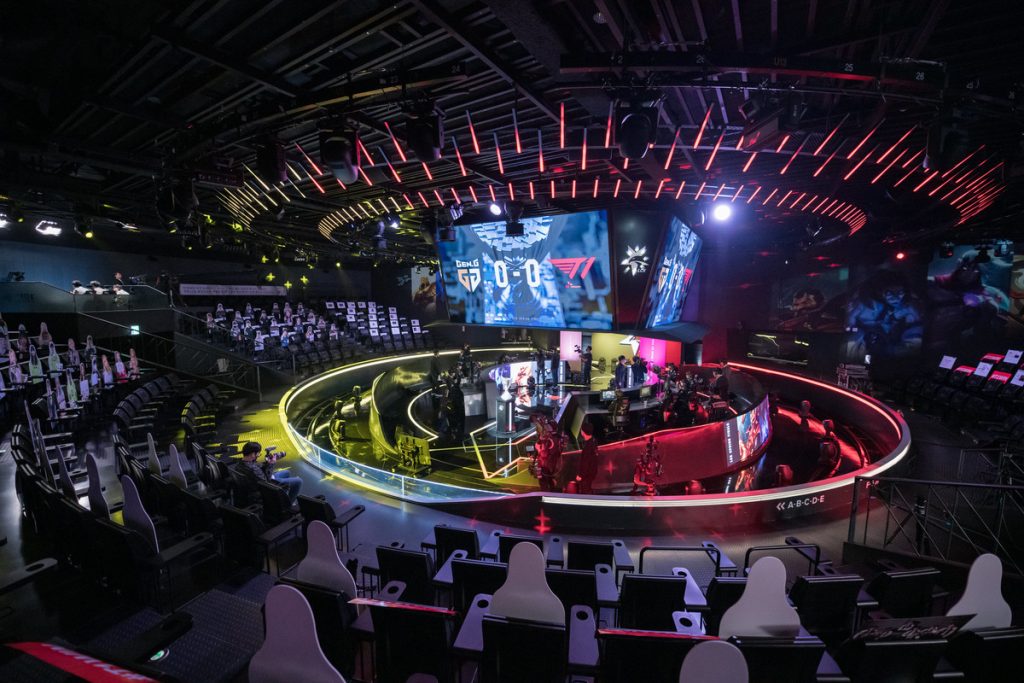 The League of Legends Champions Korea (LCK) completed their third week of the 2020 Summer Split. T1 continued their dominance over Gen.G with a 2-0 sweep, while DAMWON Gaming are proving that they’re back after a weak Spring Split showing. We take a look at where things stand in the LCK by looking at the top story lines so far in Korea.

Gen.G entered 2020 as the newest super team destined to take over the LCK. After T1 lost Kim “Khan” Dong-ha in the off-season, Kim “Clid” Tae-min also left to join T1’s direct rival. Gen.G filled out their lineup around Park “Ruler” Jae-hyuk with Kim “Rascal” Kwang-hee and Gwak “Bdd” Bo-seong. Gen.G delivered on the hype, going 14-4 in the Spring Split to earn the first overall seed an automatic berth to the finals. Bdd had his best split of his career, earning LCK Spring MVP. They checked almost every box you would want to see.

All but one. Gen.G could not beat T1. T1 won both regular season meetings 2-1, and while they were close, Gen.G could not get the job done. Gen.G then had a golden opportunity to rewrite history in the finals, getting another shot at T1 after the latter had to play a tough four-game series against DragonX in the semifinals. Gen.G had everything in their favor, including T1 losing two bans in game one after a miscommunication, but it didn’t matter. T1 swept Gen.G in a totally one-sided series, once again asserting their dominance over Gen.G.

This is what we’ve all been waiting for.
Thank you fans for always supporting us.#T1WIN #T1Fighting pic.twitter.com/SKe8BRZOwy

It should come as little surprise, then, that T1’s reign over Gen.G has continued into the Summer Split. Unlike the three game matches in the Spring regular season, T1 swept Gen.G in two games in their first meeting this Summer. Game one was a slow-paced game that Gen.G led throughout, but a critical Baron fight late gave T1 the win. Park “Teddy” Jin-seong went 5/0/2 on Aphelios for 100% kill participation in T1’s 38 minute win.

Game two was much less competitive. Moon “Cuzz” Woo-chan’s Sett immediately picked up First Blood on Clid’s Lee Sin, setting the former T1 jungler behind early. T1 then terrorized Clid, holding him down to an 0/5/1 score while they snowballed their lead. Lee “Faker” Sang-hyeok’s Twisted Fate controlled the map, earning kill participation in 15 of T1’s 18 kills. It was another unfortunate reminder of how Clid has struggled against T1 since he’s left.

Gen.G are still 4-2 and in a good spot in the LCK, so there’s still no reason to panic after their latest loss to T1. Interestingly enough, the two teams will meet again in two weeks, meaning they will not play each other in the final five weeks of the season. While Gen.G could still drop that series and go on to beat T1 in the playoffs, it seems more and more likely that Gen.G will be at a mental disadvantage if they can’t prove to themselves they can beat T1.

T1 and Gen.G have a softer schedule in week four to rebound from tough matches this week. T1 will play SeolHaeOne Prince and Team Dynamics, while Gen.G will take on Team Dynamics and Hanwha Life Esports.

DAMWON GAMING ARE BACK

DAMWON Gaming were a mess in the Spring Split. You wouldn’t normally say that about a team that went 9-9 and won a series in the playoffs, but we expected more from DWG. This was coming off a quarterfinal run in the World Championship in which they looked like one of the best teams. DWG were also able to keep all of their starting lineup intact, giving them an advantage over the rest of the top teams in the LCK.

However, DWG did get noticeably better when they added Jang “Ghost” Yong-jun to the starting lineup over Sin “Nuclear” Jeong-hyeon. When you count only Ghost’s games, DWG improve to a 10-6 match record, including playoffs. So, maybe it isn’t surprising to see DWG looking like one of the best teams in the LCK again this Summer. After an early loss to Gen.G, DWG have ripped off four wins in a row, including a big win over T1 in week three.

Ghost showed why he was an important addition in game one of the series. His Ezreal carried DWG, going 5/2/4 to earn MVP of a closely contested 35 minute game. Heo “ShowMaker” Su earned MVP in game two, going 1/0/4 on Syndra. Not only did he manage to avoid death to Faker’s Leblanc, he and DWG dealt Faker one of his rare losses on the champion in his career. Faker is now 31-8 lifetime on Leblanc.

The following series against winless Hanwha Life Esports was one-sided, as expected. DWG took game one in under 25 minutes, leading 19 kills to 8. Kim “Canyon” Geon-bu’s Trundle finished with a 0/0/14 score. DWG completed the sweep with a 22 kill to 12 win in 30 minutes. Ghost had another pop-off game, going 10/2/4 on Aphelios.

With their bot lane solidified and their solo laners continuing to dominate, DWG are looking like one of the best teams in Korea. We’ll get to see how they play against the current top team, DragonX, in week four.

SANDBOX Gaming’s Summer Split must now be split into two parts: before Jakob “YamatoCannon” Mebdi (BY) and after YamatoCannon (AY). Before YamatoCannon arrived on-site, SBX looked like the same team that was almost demoted after the Spring Split. They were 0-5, had won only one game in 11 tries, and looked every bit the worst team in the league.

Fortunately, we’re now in an AY world after YamatoCannon cleared his quarantine and is now taking the stage with his team at LoL Park. Facing Team Dynamics, the same team that dismantled SBX in the promotion tournament, SBX rewrote the script with an impressive 2-1 victory. SBX went back to the same lineup from that tournament, putting Yoo “FATE” Su-hyeok back in the starting lineup over Kim “Dove” Jae-yeon. The move paid off as FATE went 2/0/7 and 3/0/7 in the two games SBX won in the series. Jungler Kim “OnFleek” Jang-gyeom also look back on form, going 5/1/4 on Volibear and 3/0/4 on Olaf in the wins.

"Today at the venue, he said that the individual players are fingers, and together, we can be a fist. That fingers cannot beat a fist, so we must become one and become a fist."@SBGaming_KOR #LCK pic.twitter.com/zlwebG1zB8

While YamatoCannon can obviously help the team with their drafting and tactics, his strongest attribute has always been as a leader. While you can talk to your players from a distance, it is no doubt more powerful to hear such messages in person. OnFleek talked about how YamatoCannon empowered the team with some quotes before their match win over TD.

Now with YamatoCannon there day-to-day, SBX can only hope to grow stronger in the coming weeks. They’ll have a great opportunity to pick up their second win in week four when they face the winless Hanwha Life Esports to open the week. 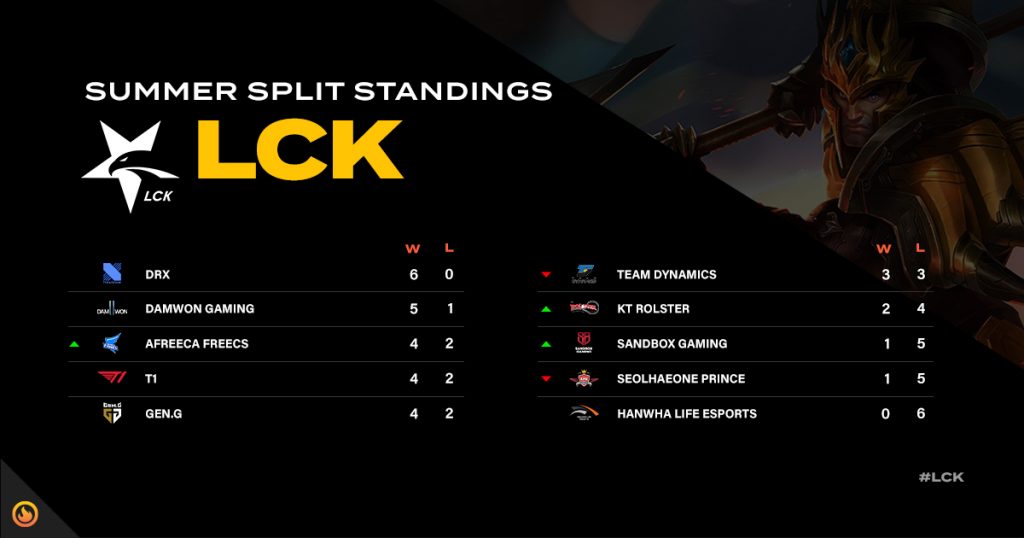 DragonX retained the top spot after another 2-0 week, beating the two newest additions to the LCK. DAMWON Gaming are now in sole possession of second place after both T1 and Gen.G suffered losses to drop to 4-2.

SANDBOX Gaming picked up their first win of the season, leaving Hanwha Life Esports as the last winless team in the league. Team Dynamics dropped a pair of games to fall out of playoff position after starting their inaugural split 3-1.

This matchup between the top two teams in the LCK will be a fun look at opposite strengths. DWG want to play through their top side with Jang “Nuguri” Ha-gwon, ShowMaker, and Canyon, while DragonX have the best bot lane in the LCK. A lot of the match will depend on the matchups DRX can get for Choi “Doran” Hyeon-joon into Nuguri and how much help Hong “Pyosik” Chang-hyeon can offer. Jeong “Chovy” Ji-hoon versus ShowMaker is one of the top mid lane matchups of the year.

T1 have cleaned up the top teams in 2020, but they have also dropped some series to some of their less exciting opponents. Team Dynamics are certainly talented enough to make T1 sweat, especially if T1 use the series to give time to some of their trainees. Former HotS pro Lee “Rich” Jae-won has been a lot of fun to watch in top lane, and he’ll get a good matchup against Kim “Canna” Chang-dong.