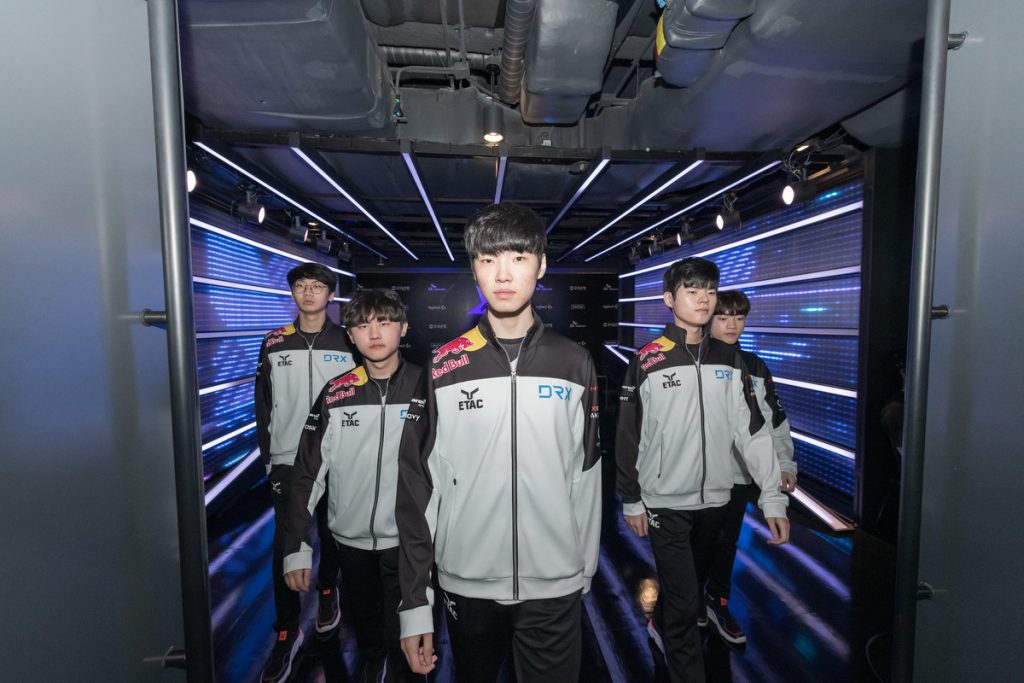 DragonX are on top of the LCK after wins over T1 and Gen.G to start Summer. (Photo courtesy LCK)

The League of Legends Champions Korea (LCK) completed their opening week of the 2020 Summer Split. DragonX had the most impressive week by far, beating both Spring finalists T1 and Gen.G. Meanwhile, the newly promoted Team Dynamics picked up their first win as a member of the LCK. We take a look at where things stand in the LCK by looking at the top story lines so far in Korea.

DragonX entered the Summer Split as a little bit of a forgotten team at the top of the LCK. T1 were the obvious favorites. Winner of three consecutive LCK titles, even a surprising 1-2 performance at the Mid-Season Cup did nothing to dampen expectations entering Summer. T1 beat DragonX 3-1 in the Spring semifinals and Gen.G 3-0 in the finals.

Gen.G were likewise the clear next team up. They finished first in the Spring regular season, earning an automatic berth in the finals. Mid laner Gwak “Bdd” Bo-seong had his best season of his career, winning the LCK MVP award. Gen.G then went to the MSC and advanced out of the group stage by beating DRX in the tiebreaker.

Some of the hype of DRX fell off. Choi “Doran” Hyeon-joon got outclassed by Kim “Canna” Chang-dong in the playoffs, leading some to question DRX’s ceiling. Jeong “Chovy” Ji-hoon had a Spring as good as Bdd, but he’s still yet to shed his “choke-y” label, especially after three consecutive losses knocked them out of the MSC.

But there’s a reason they play the games, and DRX made an early statement. Playing the most difficult opening week possible, DRX beat both Spring finalists to start the new season 2-0.

SWEET VICTORY! It was close but we have won the match 🔥 DRX will prepare well for next match against @GenG_KR on Friday 8PM.

DRX’s first match on opening night was against T1. They opened with a clean game one win, leading in gold from start to finish. T1 bounced back with a game two win on the back of Park “Teddy” Jin-seong’s 7/0/8 Kalista, setting up a winner-take-all game three. Chovy showed up in this one, going 5/0/2 with 27.6k damage on Ziggs to poke away at T1’s late game comp. Chovy outplayed Lee “Faker” Sang-hyeok throughout the series, once again proving he’s one of the best mid laners in the league.

DRX’s series against Gen.G followed a similar pattern. DRX opened with a dominant game one win, leading 16 kills to 2 when they finished the game at 29 minutes. Bdd’s Azir carried game two for Gen.G, going 7/0/4 with a game-high 17.5k damage. But Chovy showed up in game three again, going 4/2/11 on Leblanc to earn game MVP. Ryu “Keria” Min-seok chipped in with a 5/0/9 Yuumi performance.

One of the more promising developments in both series for DRX was seeing Doran and Hong “Pyosik” Chang-hyeon hold up against better competition. Kim “Deft” Hyuk-kyu should be considered the best bot in the LCK, and Chovy is at minimum a top three mid laner. With such strength on the bot half of the map, DRX just needs their top half to hold the fort. If Doran and Pyosik can keep doing that, like they did in week one, DRX could end up being the best team in Korea.

DRX will try to continue their hot start against SANDBOX Gaming and Afreeca Freecs in week two.

After qualifying through the Summer Promotion tournament, Team Dynamics replaced Griffin in the LCK. After a 9-5 regular season in the CK, TD went on an impressive playoff run and swept both of their promotion series against SANDBOX Gaming and Seorabeol Gaming. TD proved they could beat the bottom tier LCK teams. But could they compete with the top half of the league?

TD answered with a resounding yes in a 2-0 sweep of KT Rolster to open their season. Mid laner Lee “Kuzan” Seong-hyeok did the heavy lifting in game one, going 9/2/12 on Corki while dealing a team-high 39.4k damage. TD fought back from an early gold deficit to take the game in 42 minutes. TD followed that up with one of the quickest games in week one, winning game two 11 kills to 2 in under 24 minutes. Both top laner Lee “Rich” Jae-won (3/0/6) and ADC Seo “deokdam” Dae-gil (6/0/1) were 2k+ gold up on their opponent as the Nexus fell.

This was against an opponent in KT Rolster that is coming off a fourth place finish in the Spring Split and made two additions during the break. Song “Smeb” Kyung-ho may not have appeared in the series, but Son “Ucal” Woo-hyeon earned both starts for KT. KT might not be in the elite tier of the LCK, but they were the next closest thing.

Team Dynamics followed their first LCK win by dropping a series against Afreeca Freecs, but it wasn’t all bad news. TD won game one with their macro play, needing only six kills to beat AF in a 38 minute game. TD then gave Jin “Mystic” Seong-jun Aphelios in games two and three, allowing him to go a combined 16/0/17 on the broken champion. If they remember to pick or ban him, as they did in game one, they should be in a better position in their following matches.

SANDBOX Gaming made waves during the break when they announced they had hired the first Western head coach in LCK history in Jakob “YamatoCannon” Mebdi. SBX needed new direction after their 5-13 record in Spring Split earned them a ninth-place finish in the LCK. This was coming off 13-5 and 12-6 records in 2019. SBX re-qualified for the LCK with wins over Griffin and Seorabeol Gaming, but only after they were swept by Team Dynamics.

We are delighted to announce that a former Team Vitality head coach and LEC analyst Jakob "YamatoCannon" Mebdi has been appointed as the new head coach of SANDBOX Gaming. pic.twitter.com/5MpFVRvQoF

It’s only been a month since YamatoCannon took over the reigns, but SBX didn’t muster anything positive in their first week of Summer. SBX dropped all four of their games in losses to Afreeca Freecs and DAMWON Gaming.

None of the four games were particularly close. They lost in an average of 28 minutes of game time and have been out-killed 67 to 22 to open the season. The most turrets they’ve killed in a game so far is three.

Their week one starting lineup was a surprise, too. After finally sticking with a starting lineup through the promotion series, SBX opted to start mid laner Kim “Dove” Jae-yeon over Yoo “FATE” Su-hyeok for their first four games. SBX tried more lineup combinations than any team in the LCK in Spring, so it will be interesting to see if YamatoCannon continues to stick with his week one starting five or shakes things up.

SBX have a brutal week two against DragonX and T1. 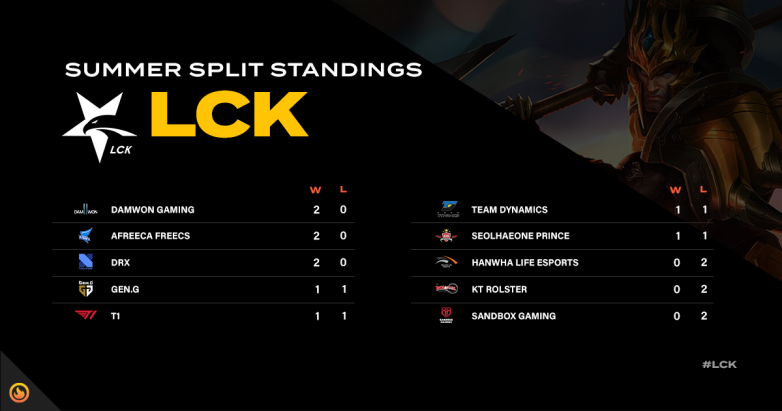 DragonX had the most impressive 2-0 start to the season, but both DAMWON Gaming and Afreeca Freecs joined them atop the standings. Both Spring finalists Gen.G and T1 lost to DragonX but defeated their second opponent on the week.

SANDBOX Gaming are the only team yet to win a game in Summer, but KT Rolster and Hanwha Life Esports joined them at 0-2. The two newest additions to the LCK in Team Dynamics and SeolHaeOne Prince join Gen.G and T1 in the middle of the pack.

DAMWON Gaming against Gen.G should be one of the best battles of mechanical play in the league. DWG’s top side of Jang “Nuguri” Ha-gwon, Kim “Canyon” Geon-bu, and Heo “ShowMaker” Su can fight anyone, and we already know that Gen.G was assembled to be a superteam. Gen.G’s advantage will be with Park “Ruler” Jae-hyuk in bot lane. Expect DWG to give power picks to Nuguri early and try to give ShowMaker counter picks into Bdd.

Both teams have surprisingly started the season 2-0. Afreeca Freecs have played the much weaker schedule, but they could be putting things together after an underwhelming Spring. Mystic and Kim “Kiin” Gi-in are a scary one-two punch, especially with Nam “Ben” Dong-hyun having better synergy with Mystic. Chovy will have a mismatch with whichever of Song “Fly” Yong-jun or Kim “ALL IN” Tae-yang gets the start for AF, so Kiin will need to punish Doran for AF to have a chance.