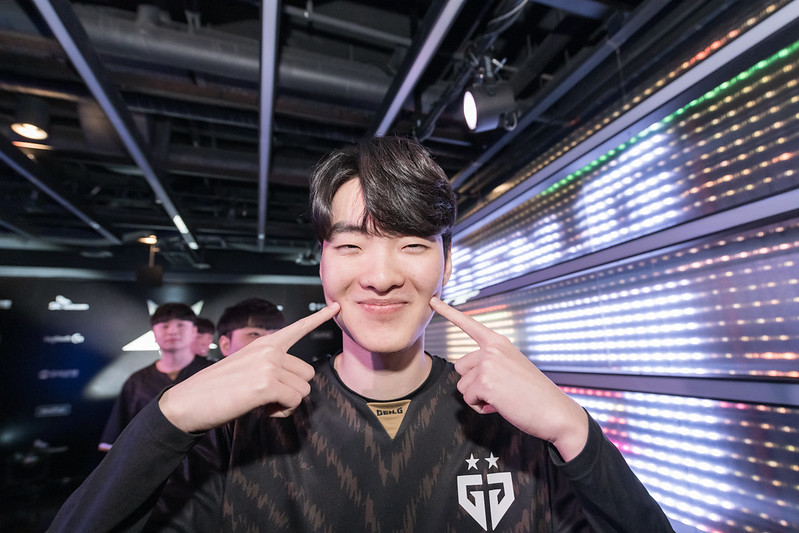 Gen.G are all smiles after clinching their spot in the LCK Spring Finals. (Photo Courtesy Riot Games - LCK)

The League of Legends Champions Korea (LCK) completed their ninth and final week of the 2020 Spring Split. Gen.G secured their first appearance in an LCK finals, while SANDBOX Gaming will join Griffin in the promotion tournament.. We take a look at where things stand in the LCK by looking at the top story lines so far in Korea.

As unbelievable as it may sound, Gen.G had never reached an LCK finals in the organization’s history. Their predecessors Samsung Galaxy won the 2017 World Championship and finished second in 2016, but both times were after qualifying via the Korea Regional Finals. You had to go back to the days of OGN to find one of their teams in a domestic finals.

With our 2-1 win today we are looking strong as the season comes to an end! Thank you #TigerNation for all your support during the season and we can't wait to catch you all again during the playoffs!💛#GenGWIN #WeAreGenG #TigerNation https://t.co/1YhDyRsBan

That has all changed with Gen.G’s 2-1 victory over KT Rolster in week nine. Gen.G’s win bumped their match record to 14-4, tying them with T1 and DragonX on the season. However, Gen.G’s 31-13 game record gave them the tiebreaker over both T1 (30-14) and DRX (31-15). With that, Gen.G get to watch the LCK playoffs from home until the finals on Saturday, April 25th.

Though KT Rolster had nothing but pride and practice to play for, they didn’t roll over for Gen.G. KT looked like they might spoil Gen.G’s party after a strong game one win. Kim “SoHwan” Jun-yeon’s Jayce bullied Kim “Rascal” Kwang-hee’s Sett, going 11/1/6 and dealing a game-high 36.2k damage. Lee “Kuro” Seo-haeng also showed off the counter pick to the oft-blind picked Azir, going 5/1/12 on Vel’Koz.

If you wanted to argue that KT gave Gen.G a break, it would be in game two. Both Jeon “Ray” Ji-won and Kim “Malrang” Geun-seong subbed in for KT. Though both are definitely capable LCK players, neither has seen game action since February. Gen.G took advantage, quickly disposing of KT 13 kills to 2 in 26 minutes.

KT then brought their regulars back in for a hotly contested game three. Gen.G steadily built a lead through the early to mid game, only to see it come crashing to a halt at 27 minutes. Kim “Clid” Tae-min got picked off while both teams were posturing for Baron, allowing KT to pick up the objective and their first gold lead. It again looked like KT could spoil Gen.G’s regular season title.

But despite a gold deficit and facing a team with Ocean Soul, Gen.G found the miracle fight at 34 minutes. Kim “Life” Jeong-min’s Rakan got the initial engage, Gwak “Bdd” Bo-seong pulled off the Shurima Shuffle, and Gen.G took a four for zero fight. They then marched it down mid and destroyed the Nexus to secure their spot in the finals.

Unlike in the LCS and LEC, Gen.G won’t get to pick their opponent in the playoffs, but we can guess who they won’t want to see. Gen.G was a combined 14-2 against eight of the teams in the league, including 2-0 against DAMWON Gaming and KT Rolster, and 1-1 against DragonX. The one team they had a losing record against in the regular season? The second seed T1.

T1 needed things to go perfectly in week nine to secure the second seed. By being one game win behind DRX, T1 needed DRX to lose one more game than T1 in the final week. So even with a T1 2-0 win, they would need APK Prince to take at least one game off DRX.

Game two was more difficult. With a strong jungle Graves pick from Lee “Spirit” Da-yoon, AF controlled the early game and built a gold lead of 3.3k by 21 minutes. A team fight win at 26 minutes turned it around for T1, as they blocked Infernal Soul from AF and took Baron for themselves. With Faker’s Azir online, they regained control of the game and ended up winning 16 kills to 13 in 34 minutes to secure the 2-0.

None of that mattered, though, without an APK Prince win over DragonX in the final match of the regular season. DRX didn’t look nervous in game one, taking it pretty easily. DRX never trailed in gold and won 17 kills to 7 in only 25 minutes.

But with what essentially amounted to a playoff series win hanging in the balance, DRX got run over by APK Prince in game two. Sung “Flawless” Yeon-jun’s Elise picked up First Blood on Choi “Doran” Hyeon-joon’s Aatrox, APK knocked down the first ring of outer turrets with their early game composition, and DRX never stabilized. Lee “HyBriD” Woo-jin punctuated APK’s win with a pentakill as APK pushed down DRX’s base while flashing T1 emotes.

While both teams would obviously prefer to have the extra round off, it may affect DRX less than it would have for T1. DRX went 2-0 against both DAMWON Gaming and KT Rolster during the regular season, while T1 was just 1-1 against both. However, T1 won both regular season meetings with DRX.

SANDBOX Gaming has tried all kinds of different starting lineup configurations to find success in 2020. They have used two different players in each role this season to mix and match new lineups, even going as far as to bench Park “Summit” Woo-tae for 12 straight games. No lineup ever allowed them to string together wins in the regular season, prompting them to continue tinkering until the bitter end.

After a strong of 21 consecutive starts for Moon “Route” Geom-su and 19 for Kim “Dove” Jae-yeon, SBX turned to Yoo “FATE” Su-hyeok and Han “Leo” Gyeo-re in a series they needed to win to avoid the promotion series. In addition to their long absences, both FATE and Leo had played in less games overall in the season.

It looked like the moves paid off in game one against DAMWON Gaming. FATE picked Leblanc and showed out on it, going 6/1/8 into Heo “ShowMaker” Su’s Corki. Leo and Kang “GorillA” Beom-hyun controlled bot lane, allowing Leo to go 7/0/5 on Miss Fortune.

But they could not keep the momentum going. Jang “Nuguri” Ha-gwon’s Jayce smashed Summit’s Ornn in game two, giving DWG a shot in the mid game despite SBX’s scaling. DWG converted it with a 16 kill to 11 win in 31 minutes.

With nothing on the line for DWG and everything on the line for SBX, DWG controlled game three from start to finish. Nuguri’s Jayce picked up First Blood on Summit’s Lucian, DWG picked up a five for zero ace before 20 minutes, and DWG methodically choked SBX out of the game. Though it took 32 minutes, DWG had built a 13k lead by the time they ended the game.

The loss forces SANDBOX into the promotion tournament with Griffin. Like Griffin, it seems unlikely that any of the CK teams can beat them in a series to join the LCK, but it also seemed unlikely that SBX would nosedive into 9th place this season. Their first order of business will be deciding upon the starting five they will entrust with their Summer Season hopes and dreams.

DAMWON Gaming defeated KT Rolster in the Wild Card round of the LCK playoffs to move on to Round 2. They will face DragonX on Monday, April 20th at 1 a.m. PST. In the typical LCK gauntlet format, the winner will then continue on to face T1 in the semifinals, followed by that winner facing Gen.G in the finals.