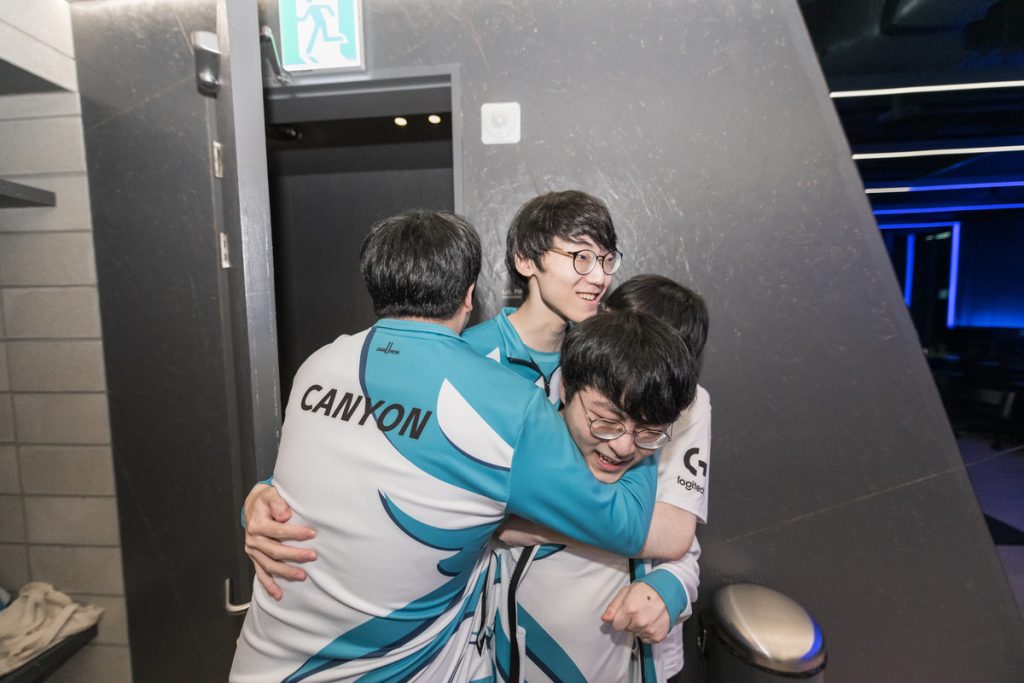 DAMWON Gaming have had a lot to celebrate on their eight match win streak. (Photo courtesy LCK - Riot Games)

The League of Legends Champions Korea (LCK) completed their ninth week of the 2020 Summer Split. With another in week nine, DAMWON Gaming still control their destiny to take the top spot in the LCK. Meanwhile, Afreeca Freecs have all but locked up the fifth and final playoff spot. We take a look at where things stand in the LCK by looking at the top story lines so far in Korea.

DRX might be atop the LCK standings heading into the final week, but it’s DAMWON Gaming who control their destiny in the race for the top seed. DRX are ahead on overall record at 15-2, but DAMWON Gaming and DRX would both end up at 16-2 if they win out. With DWG’s incredible 30-5 game record, it wouldn’t matter if they went 2-1 in both of their final games and DRX went 2-0. DWG will win on game record tiebreaker against any team that ties in them in overall series wins.

1945.08.15 Because of this historic day, we're able to enjoy the joy of victory today. Damwon Gaming has won again today and maintains first place in LCK.
Thank you for all your support.

While it’s nice for DWG that they control their destiny, they have a tough schedule ahead of them. They open the week against T1, who have won six straight matches with 2-0 sweeps. That includes the last five with matches with Lee “Clozer” Ju-hyeon. However, T1’s run with Clozer may have them run out Clozer to open the series. Though Clozer has played well, as has the team around him, T1 could certainly benefit from Lee “Faker” Sang-hyeok’s experience, if not also his play.

DAMWON Gaming then close the season against KT Rolster. KT Rolster aren’t technically eliminated yet, though they could be when they play Afreeca Freecs earlier in the week. If KT Rolster are out of the playoffs, this should be an easy series for DWG, considering KT will be more interested in preparing for 2021 than winning this series. However, a KT Rolster team with playoff hopes would be very dangerous. KT have playoff experience from Spring and have had moments of brilliance, no matter how inconsistently.

DRX only play one match in their final week, but it’s a tough one as well. They will also face T1, but the circumstances of their match may be different. With a T1 loss, coupled with a Gen.G win over Afreeca Freecs, T1 would be locked into the fourth seed when they meet DRX. T1 would then be uninterested in showing anything useful to a potential playoff opponent, so they would surely hold some things back from DRX. It also wouldn’t be surprising if they gave playing time to their younger players, especially Choi “Ellim” El-lim.

By the same token, T1 could climb up to the third seed if Gen.G falters. This would be an important threshold for T1 to hit, not only for playoff positioning, but for their World Championship ambitions. If T1 can make their way up to third, they would guarantee their spot at Worlds, regardless of their playoff outcome.

The LCK playoff format is also very rewarding to the top seeds. Like Gen.G in the Spring, the first seed is automatically placed in the Finals. Likewise, the second seed is automatically placed in the semifinals, all the way down to the four and five seeds in the wild card round. Four teams will make it to the Regional Finals, which is also king of the hill single elimination, so seeding and placement are paramount.

The LCK couldn’t have set their final week schedule up any better for drama at the top of the standings. We’ll get to see exactly how the top teams stack up as they head into the playoffs.

SANDBOX Gaming had a funky Summer Split. Coming off a terrible Spring Split that saw them barely scrape by in the Promotion Tournament to remain in the LCK, SB predictably started slow. SB lost their first five matches of the season, picking up only one game win in 11 tries. With no roster changes, it didn’t look like the Summer would be any different.

But the one change SB did make, hiring Jakob “YamatoCannon” Mebdi as their head coach, paid dividends. After YamatoCannon cleared the quarantine period and joined his team in person in the middle of week three, SB were revitalized. They immediately picked up their first win of the season over Team Dynamics, but they didn’t stop there. SB went on a roll, beating Hanwha Life Esports, KT Rolster, and SeolHaeOne Prince to climb back up to 4-5.

We lost 1:2 to Afreeca Freecs. We will strive to gain victory against HLE to round off our last game of LCK Summer. Thank you to all our supporters.#LoL pic.twitter.com/kT7hLBWUgj

That put SB right back into the middle of the playoff race, raising YamatoCannon to legendary status. Unfortunately, SB couldn’t keep up the magic against better teams. While they beat up on the weaker teams during that run, SB lost to every playoff team remaining on their schedule: DAMWON Gaming, T1, DRX, Gen.G, and Afreeca Freecs. That 2-1 loss to AF to end week nine officially eliminated SB from playoff contention, as they sit 6-11 and 3.5 games behind AF in the standings.

While SB’s 6-6 record with YamatoCannon is an undeniable improvement, the team just wasn’t strong enough to get over the hump against better teams. Assuming Afreeca Freecs makes the playoffs, SB have gone 0-10 against the five playoff teams in the LCK. Like the HLE of old, SB turned into the gatekeepers between the playoff and non-playoff teams this season.

SB have players under contract in every position through at least 2021, including starters Park “Summit” Woo-tae, Kim “OnFleek” Jang-gyeom, and mid laner Yoo “FATE” Su-hyeok. However, their starting bot lane Moon “Route” Geom-su and Kang “GorillA” Beom-hyun are set to be free agents at the end of the year. SB have Han “Leo” Gyro-re and Jeong “Kabbie” Sang-hyeon still under contract, but Route and GorillA were starting for a reason.

However, SB are in bigger need of addressing the top half of the map. The combined efforts of Summit, OnFleek, and FATE were not good enough to compete with the top teams in the LCK. Summit probably has the most mechanical talent of the three, but his inconsistency led to his benching in the Spring. SB will have to make some hard decisions on how they want to retool their lineup, but the goal should be clear — address the top half of the map.

AFREECA FREECS ONE WIN FROM CLINCH

As mentioned before, Afreeca Freecs are in a very good spot to make the playoffs. Not only is their 9-7 record two matches better than KT Rolster, their 19-17 game record is three games better. For KT Rolster to pass AF, they would have to pick essentially win out in sweeps and have AF lose out without picking up any game wins.

We win today's match against SB. We'll show a good performance for winning streak. Thank you for supporting us today.#AFWIN #GOFREECS

However, KT Rolster do get the chance to play Afreeca Freecs to open the week. They will need to win that series 2-0 to believe they have any chance at sneaking into the playoffs. Afreeca Freecs would then still have the opportunity to upset Gen.G later. While AF wouldn’t be favored, it’s possible that Gen.G could already be locked into the third seed before the match begins. In that case, they probably wouldn’t want to give away any information in their draft to a potential playoff opponent.

Assuming KT Rolster beats Afreeca Freecs and then AF loses to Gen.G, KT Rolster would still have the daunting task of beating DAMWON Gaming. There is no scenario in which DWG wouldn’t still be fighting for the number one seed by the time they play KT Rolster, so there’s no chance that KT get off easy in that series. If they want to make the playoffs, they’ll have to beat the best at their best.

Suffice to say, a lot would have to happen for KT Rolster to slip past Afreeca Freecs for the final playoff spot. Afreeca Freecs could just put an end to the drama themselves with a win to open the week.

DRX and DAMWON Gaming are locked into a battle for the top seed, while T1 and Gen.G are left fighting for third. Afreeca Freecs have a stranglehold on the final playoff spot, but KT Rolster are still mathematically alive.

The rest of the LCK is not. SANDBOX Gaming are the latest to fall out of the race, bringing their record with YamatoCannon to 6-6. SeolHaeOne Prince and Hanwha Life Esports will have one more week to try to double their win total.

The two hottest teams in the LCK will fight for playoff positioning. DAMWON Gaming are on an eight match win streak and look like the best team in the league, but they still may have to win out to earn the top spot. T1 are on a six match win streak, including the last five with Clozer, but they still sit only fourth in the standings. Will T1 continue to use Clozer in a match that could help them clinch a World Championship berth? If T1 loses a game, will they immediately turn to Faker to try to turn the match around? DAMWON Gaming are good enough to beat either iteration of T1, so T1’s decision making will be telling.

If Afreeca Freecs win this series, they’re into the playoffs. If AF take even one game off KT Rolster, they’re still likely into the playoffs. It only really gets interesting if KT Rolster can pull off a sweep. KT featured both Kim “bonO” Gi-beom and Kim “Malrang” Geun-seong in their win over SeolHaeOne Prince, so it will be interesting to see who gets the nod to start against AF. Song “Smeb” Kyung-ho and Son “Ucal” Woo-hyeon, KT Rolster’s two mid-season acquisitions, are now solidified as the solo lane starters.

Depending on the outcomes earlier in the week, this match could mean everything or nothing. If DAMWON Gaming win both their matches or lose both their matches, DRX’s playoff spot will already be determined. Likewise, if T1 lose to DWG and Gen.G beat Afreeca Freecs, T1 would already be locked into their spot. But assuming the scenarios don’t work out cleanly like that, this will be a massively important series. Kim “Canna” Chang-dong had his way with Choi “Doran” Hyeon-joon in Spring, so top lane could again be a key to this series. The matchup between top ADCs Kim “Deft” Hyuk-kyu and Park “Teddy” Jin-seong will be fun to watch.