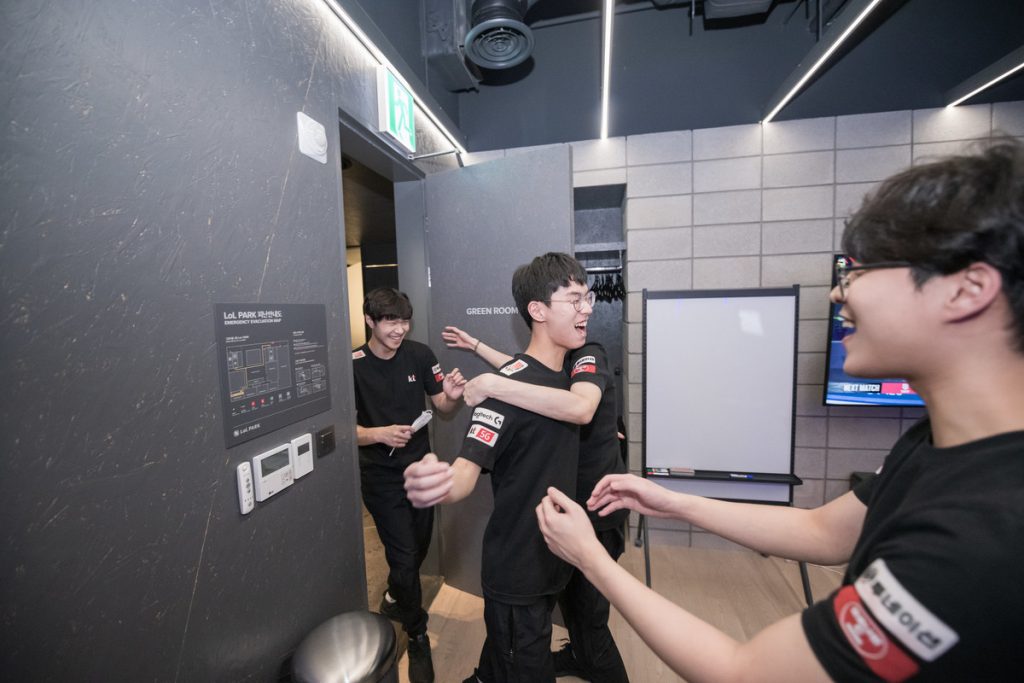 KT Rolster were all smiles after knocking off the previously unbeaten DragonX. (Photo courtesy LCK)

The League of Legends Champions Korea (LCK) completed their fourth week of the 2020 Summer Split. KT Rolster knocked off the previously undefeated DragonX in a big upset, but DRX rebounded and kept the top spot by beating DAMWON Gaming in their second match. We take a look at where things stand in the LCK by looking at the top story lines so far in Korea.

DragonX were the dominant force in Korea entering week four. Not only were they the last remaining undefeated team at 6-0, they already defeated both of their top challengers, T1 and Gen.G. They were coming off a 2-0 week three in which they swept both Team Dynamics and SeolHaeOne Prince in noncompetitive matches. DragonX checked every box as the best team in the LCK.

KT Rolster were on the other end of the spectrum. After a strong end to their Spring Split, KT started slowly again in Summer. They began 2-4 through three weeks, beating only bottom tier teams Hanwha Life Esports and SeolHae One Prince. The additions of Song “Smeb” Kyung-ho and Son “Ucal” Woo-hyeon during the break didn’t seem to be moving the needle.

So when KT Rolster announced Smeb would start at support for the ailing Park “TusiN” Jong-ik against DragonX, that seemed like it for the series. There was no way a bottom tier team with an emergency role-swap substitute could beat the best team in Korea, right?

After falling in game two, KT Rolster rebounded for game three. Any of KT’s members could have earned MVP, but Ucal got it for his 5/0/8 Twisted Fate. SoHwan once again played well, going 7/1/8 on Wukong to out play Choi “Doran” Hyeon-joon’s 1/7/0 Volibear. Smeb played Maokai again, going 0/3/11 and playing the front line role with Kim “bonO” Gi-beom’s 2/0/13 Trundle. KT dominated DRX 19 kills to 4 in 36 minutes to pull off the upset.

The win did nothing to change the narrative of KT Rolster being a rollercoaster ride throughout the season. That only grew stronger as KT followed this upset win of DRX with a loss to SANDBOX Gaming in their second match of the week. Still, you have to be impressed by their ability to step up and play well against the top teams of the league during the year. T1 will have to be on high alert when they face KT Rolster to open week five.

After their shocking loss to KT Rolster, DragonX were suddenly under threat of losing the top spot in the LCK. DAMWON Gaming entered their week four matchup with the same 6-1 record, losing only in a close 2-1 series to Gen.G in week two. Their three-man top side of Jang “Nuguri” Ha-gwon, Kim “Canyon” Geon-bu, and Heo “ShowMaker” Su are as good as any in the world. DragonX had to recover quickly to keep their hold on the LCK.

They did just that in a tough three-game series. DragonX opened the series with a closely contested game one win. DRX led the early game, but a four-for-one mid game swung the gold lead to DWG. DWG took the first Baron and led by as much as 8.1k, but a four-for-zero team fight at the second Baron turned the game back around for DRX. Jeong “Chovy” Ji-hoon’s Twisted Fate picked up a triple kill in the pivotal fight, elevating him to game MVP with a 5/0/3 score in the 10 kill to 9 win.

DWG took the lead in the mid game again in game two, but this time they only continued to boost their gold lead. ShowMaker’s Zoe was unstoppable, landing a barrage of poke on DRX’s melee-heavy composition. ShowMaker dealt a game-high 37.6k damage and went 10/1/10 to even the series at a game apiece.

DragonX picked a better scaling team in game three, and while DWG took a third consecutive mid game lead, felt confident in their late game. They controlled the deficit this time, never allowing DWG to get ahead by more than 3k gold. DRX then found the late game team fight win again to secure Baron and take the series. Chovy earned the third MVP for mid laners in three games, going 5/3/7 on Azir and controlling the crucial late game team fight. Nuguri went 8/3/4 and dealt a game-high 20.6k damage on Camille in a losing effort.

While DRX may have gotten the win, DWG looked very good in the loss. The LCK has turned into a top heavy league in the past couple of years, and 2020 has been no exception. T1, Gen.G, and DragonX started the year as the three teams to beat, but DAMWON Gaming are making a case to be one of Korea’s three teams to make it to the 2020 World Championship.

Both DragonX and DAMWON Gaming will take on Team Dynamics in week five. DragonX will also face Hanwha Life Esports, while DAMWON Gaming play Afreeca Freecs in their second match.

Former Heroes of the Storm player Lee “Rich” Jae-won began his transition to League of Legends in the middle of 2019. Rich was known as the Faker of HotS after being considered the best player on back-to-back Global Championship winning teams. After playing in five 2019 Summer LCK games for Gen.G as a mid laner, Rich moved on to Team Dynamics as a top laner to begin 2020.

Rich then helped Team Dynamics qualify for the LCK after a great performance in the Summer Promotion Tournament. Rich never got a chance to play against Lee “Faker” Sang-hyeok with Gen.G in 2019, and though he’s now moved to top lane, week four afforded us our first Faker versus HotS Faker matchup. Round one went to HotS Faker as Team Dynamics pulled off an upset over T1.

Faker looked like he might carry T1 to a series win after a dominant game one. His Corki went 8/2/6 and dealt a game-high 29.4k damage to get T1 off to a 1-0 lead. But Rich made sure to leave his own impact on the match. His Lucian into Kim “Canna” Chang-dong’s Jayce went 5/0/3 in game two. Rich also finished with 15.3k damage dealt, good for highest in the game. TD bounced back with a decisive 10 kill to 1 win in only 28 minutes.

Rich has a long, long way to go to come close to Faker’s legacy in League of Legends, but it was a nice start in their first meeting. He and Team Dynamics will continue with a difficult schedule in week five, as they will take on the top two teams in the LCK in DAMWON Gaming and DragonX.

DragonX lost their first match of the season, but they still maintain first after beating DAMWON Gaming to end the week. T1’s loss to Team Dynamics dropped them behind DWG and Gen.G in the standings, while Afreeca Freecs round out the last playoff spot.

Hanwha Life Esports continue to be winless after an 0-8 start. SANDBOX Gaming are now on a three-game win streak since Head Coach Jakob “YamatoCannon” Mebdi has been able to coach them in person. Team Dynamics are firmly on the playoff bubble at 4-4.

T1 and Gen.G will play for the final time in the 2020 regular season in week five. T1 beat Gen.G 2-0 in week three, continuing their dominance over Gen.G. It could be crucial for Gen.G’s confidence that they prove they can beat T1 before the playoffs begin. They’ll need Kim “Clid” Tae-min to perform better than he has against his former team. Clid has disappeared in this matchup, wilting under the pressure Faker and T1 put on him. He and Gen.G need to change the narrative.

Both teams are young and full of promise. DragonX are closer to reaching that promise, as their first place standing indicates, but don’t discount Team Dynamics after their upset win over T1. TD have a distinct advantage in top lane with Rich into Choi “Doran” Hyeon-joon, but few teams in the LCK can match the strength of DRX’s bot half combination of Chovy, Kim “Deft” Hyuk-kyu, and Ryu “Keria” Min-seok. TD can make a strong playoff push with good showings against DRX and DAMWON Gaming.