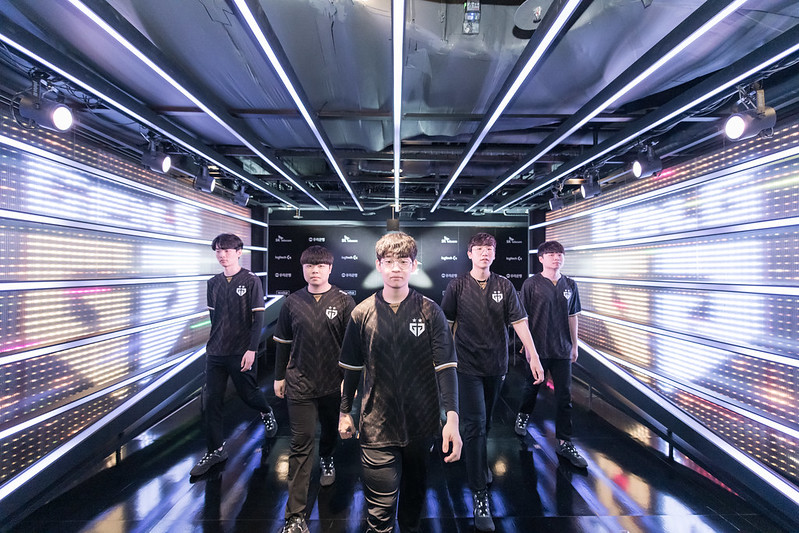 Gen.G end Round 1 in first place after a 2-0 win over SANDBOX Gaming. (Photo courtesy LCK - Riot)

The League of Legends Champions Korea (LCK) completed the final five games of Round 1 before going on an indefinite hiatus. Gen.G took over sole possession of first place after T1’s loss to Afreeca Freecs. Meanwhile, KT Rolster ended the first half of the season with a perfect game over Griffin. We take a look at where things stand heading into the break by looking at the top story lines so far in Korea.

Gen.G took care of business in their match and were rewarded with some help from the Afreeca Freecs later in the night. Gen.G’s 2-0 win over SANDBOX Gaming combined with AF’s 2-1 win over T1 give Gen.G sole possession of first place after Round 1.

Though they have been the best team in the LCK during the first half of the season, Gen.G didn’t look like it in game one against SB. The teams traded objectives pretty evenly in the early game, as SB prioritized Rift Heralds while Gen.G opted for drake stacking. SB picked up an early three kills for one trade at 10 minutes, but Gen.G took the first meaningful gold lead of the game with a four kills to zero fight win just before 20 minutes.

With early drakes and a gold lead, Gen.G were able to convert their early power into a Cloud Soul. Even though it’s the weakest of the Souls, they probably should have been able to use that and their scaling advantage to close out the game. After all, they were playing against a team with Lee Sin, Volibear support, and AP Nautilus mid. None of those are known for their scaling.

Instead, SB found a pick a late pick and turned it into Elder Drake, Baron and swung the game from a 4k Gen.G gold lead to a 3.5k lead for SB. Fortunately for Gen.G, that gold difference is mostly irrelevant at 45 minutes into the game and SB weren’t able to end the game with both buffs. Gen.G got another chance at a fight and capitalized, first picking off Cho “Joker” Jae-eup before picking up Baron and Elder Drake. With both buffs and a Yuumi on his back, Park “Ruler” Jae-hyuk’s Ezreal mercifully ended the game with a pentakill in SB’s base.

Game two, however, was a reminder of how good Gen.G can be. Gwak “Bdd” Bo-seong’s Sett kicked off the game with a dive on substitute top laner Han “Lonely” Gyu-joon to pick up First Blood. Instead of trading objectives, Gen.G took whatever they wanted in this one, including both Rift Heralds and all four elemental drakes. SB only mustered a single kill and turret take the entire game. It didn’t hurt that Gen.G had one of the most lopsided drafts of the year — they were somehow allowed to get both Ornn and Sett on blue side.

Gen.G will be sad that a break comes now to interrupt their momentum. Their only series loss was a close 1-2 against T1 in week two, and their 17-5 overall game record is also tops in the league. Whenever the LCK resumes, Gen.G will close out week five against the second place DragonX.

T1’s match will be one to remember for Lee “Faker” Sang-hyeok, but it probably won’t be for the rest of his team. The greatest League of Legends player of all-time picked up his 2000th kill in the LCK in game two of the series, but T1 fell to Afreeca Freecs 1-2 to drop to a tie for second place.

Game one of the series was a relatively easy one for T1. The team focused on shutting down Song “Fly” Yong-jun’s Sett, and they did it well. Even though AF opted to move him mid lane to try to protect him in the shorter lane, Fly was targeted repeatedly and struggled to a terrible 0/8/5 performance. It was a great game for Moon “Cuzz” Woo-chan, who participated in 20 of T1’s 22 kills and secured both early drakes and Rift Herald for the team. Faker’s nine kills put him on the precipice of history.

At 31:24 into game two, Faker’s Zoe picked up a kill on Son “Jelly” Ho-gyeong’s Sett to become the first player in LCK history with 2,000 kills. It was a momentous occasion, and Faker’s skill shots helped T1 win the fight two kills to zero. The only problem? AF were up 10k gold and already secured the Infernal Soul. Despite Faker’s best effort and 4/1/0 performance, T1 got rolled 16 kills to 5. Much like T1 in game one, AF controlled game two from start to finish, ending in just over 34 minutes.

Unfortunately, there may have been a bug that contributed to AF’s win. Though T1 were already down substantially at the time, Kim “Canna” Chang-dong’s Ornn appears to have bugged out during his ultimate in the middle of a drake fight. It’s unlikely that it changed the outcome of the fight, much less the game, but it was notable nonetheless. Vandiril explains in this video:

Game three in the series was dead-even until 31 minutes. As much as Faker held T1 in game two, his teleport flank was the beginning of the end for T1 in game three. He and T1 collapsed on Fly’s Ornn, eventually killing him, but in the process allowed Jin “Mystic” Seong-jun’s Varus to free fire and earn two kills for AF. AF then grouped at Baron, picked up kills on the T1 members attempting to disrupt, and picked up the objective.

From there, AF’s superior team fight reached late game status on equal footing and dictated the rest of the game. T1 attempted to disrupt a Baron start by AF and were slaughtered, allowing AF to end immediately afterwards. Mystic finished 6/1/5 and dealt a game-high 25.5k damage.

KT END ROUND 1 WITH PERFECT GAME

KT Rolster may not have had the start to the split they wanted, but they are one step closer to a playoff berth after they ended Round 1 with a perfect game win over Griffin.

As much as a perfect game means one team played really well, it also usually means the other team played really poorly. That was definitely the case in this one, especially during First Blood. KT Rolster had four members on Rift Herald, but Griffin decided to come contest it. Choi “Sword” Sung-won’s Mao’kai walked up 1v4 and died instantly. There was no team coordination whatsoever and Sword donated Vel’Koz an early 400 gold.

But KT still need to be given credit. Kim “bonO” Gi-beom’s Lee Sin was active, coming bot with Rift Herald to pick up a kill and take all of the turret plates in one fell swoop. KT also took drakes early and often, getting to their Mountain Soul just after 24 minutes. Sure, the game was basically already over by then, but continued smart plays are what led them to that point.

As for Griffin, they drafted a composition that always has the potential to get dominated early. When you draft Maokai, Azir, and Ezreal as your main carries, it’s no surprise that you lose all over the map. Scaling doesn’t matter if you can’t get there, and Griffin most certainly did not. Even with an Elise, Lee “Tarzan” Seung-yong has never been known as a high volume ganking jungler and did little to release pressure in his lanes.

This was yet another in a worrying trend of Korean teams just rolling over and folding when losing early. Hopefully, the time off will allow for more experimentation in scrims to get out of the passive funk that seems to be present on a number of teams in the league.

LOOKING AHEAD: ROUND 2 POSTPONED

Round 2 of the LCK Spring Split has been postponed until further notice because of the increased spread of the coronavirus. The LCK could eventually adopt an online format, similar to the one that is now rebooting in China with the LPL. Until then, teams will continue to scrim online until Riot Korea are comfortable resuming the season.