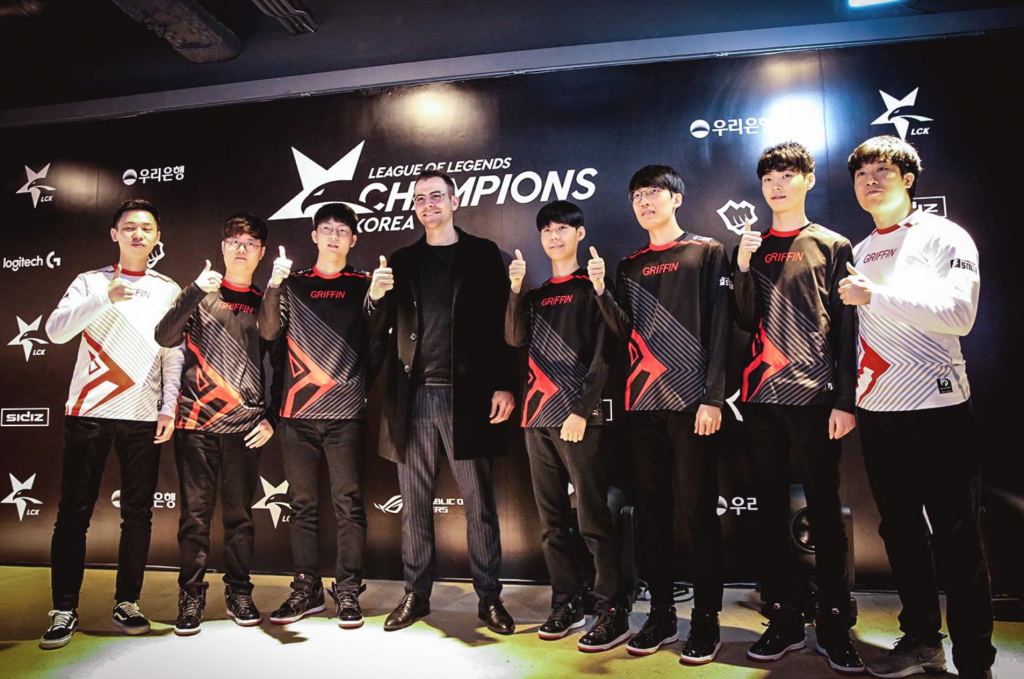 Griffin outlasted T1 this week, but the gap between the two teams now appears to be closing. (Photo courtesy of Griffin)

Week 7 in the 2019 LCK Spring Split is done. Griffin still sits undefeated atop the standings, while Jin Air Green Wings picked up their first match win of the season. We take a look back at the match results, top storylines, best plays, and standout individual performances from the past week in Korea.

Griffin crushed SK Telecom T1 in their first matchup of the season, but their rematch promised a better series. T1 have been rounding into form, putting away their inconsistency from early in the season to blow other LCK teams out of the water in recent weeks.

Griffin outlasted T1 in this series, but the gap between the two teams now appears all but closed after the epic three-game set.

Though Griffin won the series, it was T1 who had the only win you could say was controlled from start to finish. That happened in Game 1, as T1 made sure Griffin knew they would be in for a fight.

The first action of the game popped off at 17:30 when the teams gathered to fight for the second mountain drake spawn. Tarzan’s Nocturne ulted in and secured the drake, but T1 won the ensuing fight and took First Blood.

By securing the outer ring of Griffin turrets, T1 had priority on the map to pick up the next air and infernal drakes uncontested. The game was slow but methodical from T1, incrementally increasing their lead over Griffin by extending their vision line and squeezing out value from uncontestable drakes.

Griffin finally tried to find a play at 28:30. Tarzan ulted into T1 in Griffin’s bot side jungle, but T1 were able to kite and Mata hit a great Braum ult in the choke point. After a full minute of fighting and Sword teleporting back into the fight for a second time, T1 came away with three kills to none. T1 moved over to Baron right after, picking that up uncontested.

Down over 9k gold at 38:30, Griffin tried a desperation Elder Drake after T1 secured another Baron. It was a no-win situation for Griffin because at this point in the game, they could not contest T1 anywhere on the map. Sword’s Urgot secured Elder for Griffin, but T1 were able to pick up three kills and push to end the game.

That control from start-to-finish was something we had not yet seen a team do to Griffin, which makes sense when you consider that they’ve dropped only one game all split long.

Griffin came up with a new gameplan in Game 2: find picks on T1. After a rough early game from Tarzan’s Elise, he came up with crucial E Cocoons on T1 players — in particular on Faker — to catapult Griffin to a win.

Chovy had mid priority most of the game on Irelia into Lissandra, no small feat even when you consider that Tarzan visited often. Chovy isn’t just beating up on the other LCK mids, he’s holding up against Faker as well. This was one of Faker’s worst games of 2019. He finished 2/7/3 on Lissandra and was caught out all game long, though this blind catch by Tarzan was just impressive:

Both teams certainly felt the pressure in Game 3 and it was a wild one. Khan and Clid executed the perfect dive on Sword’s Yorick early for First Blood, but it was Griffin who built a strong early lead.

Griffin returned a kill top with a roam from Lehends to even up the kills top lane. The first major skirmish came on a 4v4 bot lane. Both junglers showed up at the same time, leading to both top laners teleporting down. Mata’s Braum was eliminated early as he tried to set-up for Clid’s Zac, giving Griffin the turn. They also picked up Clid and several turret plates bot for a huge early advantage.

T1 tried to contest Griffin’s Rift Herald take, but Griffin secured it and took a kill on Khan for their trouble. Lehends got out by the skin of his teeth, meeting up with Viper’s Kalista to be ulted out of harm’s way.

All told, Griffin were up almost 6k gold, three turrets to zero, three drakes to zero, and six kills to two at 27 minutes. They tried engaging onto T1 in the top river, but T1 fought back. Viper overreached to try to take out Teddy’s Lucian, who lived with a sliver of health. Suddenly T1 had the advantage, as Yorick and Eve are not great team fighters compared to T1’s Zac and Azir combo.

T1 won the fight four kills to one and took Baron. Now less than 2k down in gold, T1 clearly had the advantage in any kind of 5v5 team fight. Griffin would have to win this one by splitting T1 up, as they did in Game 2.

The five-man squad of T1 traded top inhibitor for bot inhibitor as Sword’s Yorick pushed uncontested. Khan teleported back to base to defend while the four-man squad of T1 wiped Griffin, but it wasn’t that simple. Khan could not hold Sword on his own and Sword took two Nexus turrets before Faker could get back to base. He shut down Sword to stop his push, but T1 now could not end the game themselves.

T1 made the call to take Baron at 34 minutes while leaving Khan in base — surrounded by vision wards — to defend. Tarzan’s Evelynn occupied Khan’s initial attention while Yorick and Irelia teleported in to hammer on the Nexus. T1 had Baron empowered recalls but they were not fast enough. Yorick and Irelia ended the game before T1 could take even a quarter of their HP:

From beginning to end, this was the best series of League of Legends so far in 2019. Griffin proved that they are still unmatched in late game calling, but T1 showed that they have the mechanical and playmaking ceiling to unseat the LCK’s top team.

Here’s to hoping there will be another rematch to be played in the Spring Split Finals.

The 0-18 dream is dead. After weeks and weeks of disappointing PapySmithy with their inability to do anything proactive, JAG did enough to win a series over Afreeca Freecs.

Sure, AF are out of playoffs and not anywhere near the level of a playoff team that was expected at the beginning of the season. Ucal and Spirit have been benched, they’ve rotated players through different roles, and have shown no identity — unless you count throwing every resource into Kiin — throughout the season.

But JAG don’t care about that. Both of their wins came pretty handily as well. They won 16-kills-to-5 in 31 minutes in Game 1 and 18-kills-to-3 in 32 minutes in Game 3. Route finished 15/3/8 in the series as JAG’s bot lane outplayed the revolving door that is AF’s bot lane.

As rebuilding teams tend to do, JAG have rotated a ton of players in their lineups this season to try to find something that sticks. Their latest lineup of Lindarang, Seize, Grace, Route, and Nova may be the one they try for the rest of the season. Malrang had been starting every game in jungle, but Seize came in and out-jungled Dread in JAG’s two wins. That should earn him a better look.

Player of the Week: Viper

Every week this could go to almost any member of Griffin. They win their games so comfortably that it’s often hard to pick out a true standout performer when they all are playing at an elite level.

But with wins over the 2nd and 3rd place teams in SK Telecom T1 and SANDBOX Gaming, Griffin were due for another honor here and this week it goes to Viper. He ate T1 up in Game 2 of their series with his 4/0/7 Kalista performance. While he didn’t massively outplay anyone in the other games in the series, that’s true of all of Griffin’s players and more of a testament to how good T1 are now.

Viper was back to putting up gaudy numbers in the win over SB, though. He finished 8/0/5 on Lucian in Game 1 and 4/0/4 on Kalista in Game 2, going deathless in the series. For as much trouble as T1 gave Griffin, let us not forget that SB are the 2nd place team and currently hold the tiebreaker over T1.

Viper has an 11.84 KDA for the season. That’s pretty good, considering Teddy’s 6.94 KDA is 2nd best among LCK AD carries. He’ll look to improve on that number in week 8 as Griffin take on bottom feeders Gen.G and Afreeca Freecs.