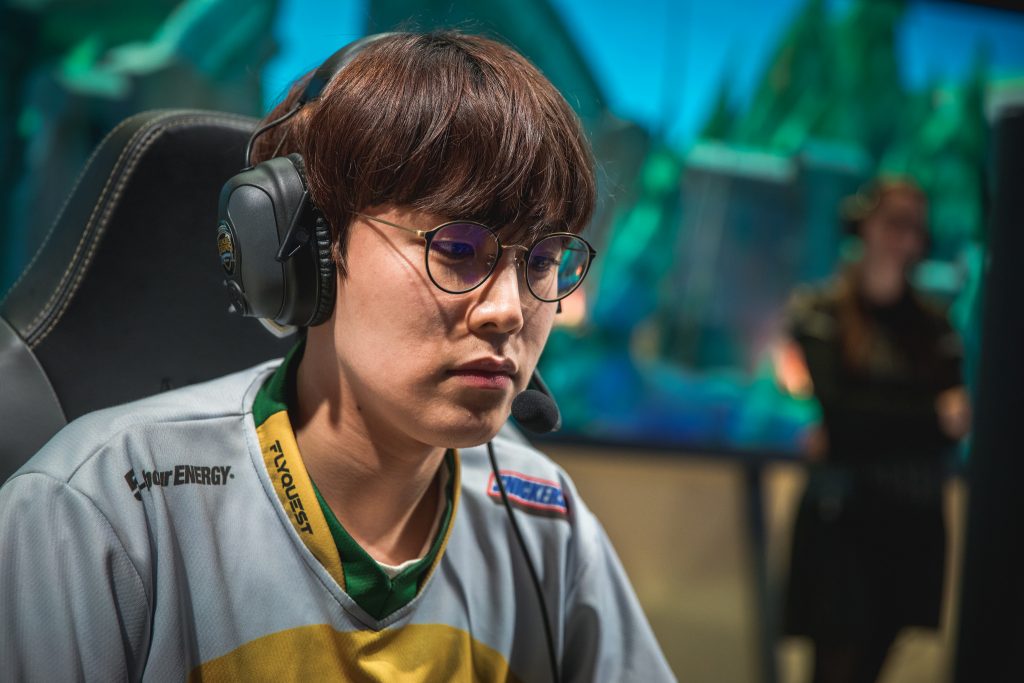 DAMWON Gaming seemed to be an odd fit for Flame. But we learned that his experience could become a key factor for the squad in the LCK.

Week 5 in the 2019 LCK Spring Split is done. Griffin sits atop the standings, while Jin Air Green Wings are the only team yet to pick up a match win. We take a look back at the match results, top storylines, best plays, and standout individual performances from the past week in Korea.

Flame Saves The Day Against SKT

On the surface, DAMWON Gaming seemed to be an odd fit for Flame. Nuguri is one of their young star players and surely Flame could have found a team with a more urgent opening if playing time was his goal.

In their series against SK Telecom T1 — newly rebranded T1 — DWG displayed just how valuable Flame is to their team.

Nuguri played in Game 1 for DAMWON Gaming and it was very evenly matched at 34 minutes. Gold was within 2k — almost negligible at this point in the game — and elemental drakes were tied up at two apiece.

T1 started up in the infernal drake, looking to pick up their third, but just as importantly deny DWG their first. Clid’s Lee Sin secured it for T1 and the teams traded a kill apiece on the back end.

With three infernal drakes and an ocean drake for sustain, T1 were able to repeatedly clear out vision around Baron pit and force DWG to cede the objective or face check a tough fight. DWG chose the latter and Clid executed a flash Lee Sin kick to kick off the fight. T1 picked up 3 kills and an uncontested Baron.

As if they needed more firepower, T1 then made their way to Elder Drake and secured it. With the three empowered infernal drakes, T1 could not be stopped as they rampaged through DWG’s base. T1 were able to close it out just minutes later, taking the 14 kills to 4 win in 45 minutes.

DAMWON Gaming decided to make a change after Game 1, subbing in Flame for Nuguri top and Canyon in for Punch jungle.

Clid and T1 weren’t so welcoming to Flame in his 2019 debut. He and Khan flashed onto Flame top at 8:30 to draw First Blood. Bot side didn’t go much better early for DWG, as BeryL died in a 2v1 situation trying to kill Teddy’s Ezreal.

DWG showed some more proactive plays in the mid game of Game 2. Flame was involved early and often, using his Urgot R Fear Beyond Death to snipe kills and threaten a big fear on T1’s team, forcing them to scatter. After one such pick, DWG picked up the first Baron of the game at 22 minutes.

An incredible 4-for-1 teamfight brought T1 back into the game and secured them the second Baron, but they could not make any progress with it. Game 2 stalled out until the third Baron, which went over to DWG. They used that to also take the Elder Drake and finally cracked open the T1 base.

DWG decided to keep what was working, bringing Flame and Canyon back on stage for Game 3. Flame was once again on Urgot duty, and he made it work for him.

That said, the beginning of the game was rough for DWG. T1 picked up an early ocean drake, then won the first fight of the game around infernal drake. With their early success, it was possible that T1 would run away with the game, given the diving potential of their meatballs  Sion, Sejuani, Galio, and Alistar.

The game was looking that way at 24 minutes. T1 picked up 2 kills and were forcing their way onto Baron. That’s when Flame made his move. With Nuclear and Canyon occupying much of T1’s attention, Flame flash smote Baron away from Clid.

Off the back of that, DWG were able to clean up the rest of T1, picking up 5 kills for 2. A game that was looking like a runaway victory for T1 suddenly saw DWG with the gold lead at 25 minutes.

Utilizing Baron buff, DWG broke through T1’s outer ring of turrets to balloon their gold lead up to 5k at 34 minutes. With that lead and double mountain drakes, they rushed Baron down and once again cleaned up the ensuing fight. With the clean 5-for-0 ace and Baron buff, DWG took the series 2-1 against T1.

T1 certainly had their “what ifs” in the series. What if Faker was playing literally any champion but Sylas in Game 2? What if they had prioritized zoning level 15 Unsealed Spellbook Urgot instead of Canyon in Game 3? T1 had their own shortcomings.

But make no mistake, this was an important series win for DAMWON Gaming. They showcased a versatility in their lineup that will make them much hard to prepare for going forward. Nuguri and Punch will likely favor a carry top and early game or tankier jungler, while Flame can play more of the tanks and bruisers and open up Canyon to play carry junglers like Riven and Kayn.

Obviously, DWG will eventually want to play Nuguri and Canyon at the same time. But until the team can get some more seasoning and find their in-game shot calling, bringing in either Punch or Flame is doing wonders for the team in 2019.

SANDBOX Gaming hit a road bump in Week 5 after an electric start to their season. Losses to Afreeca Freecs and Kingzone DragonX brought them down to 7-3 and a tie with SK Telecom T1 for 2nd place.

A loss against Kingzone DragonX is understandable, even if a bit unexpected. They have played over expectations so far in 2019 and sit at a respectable 6-4 in the LCK. Deft has been playing out of his mind and PawN has had somewhat of a resurgence in mid lane, finishing the series a combined 8/1/10.

The series loss to Afreeca Freecs is a bit more troubling.

To their credit, Afreeca has finally decided to start players in their main roles and it paid off. Spirit is completely out of the starting lineup for now, with Dread taking command of the jungle and Aiming finally allowed a support who mains the role.

That showed up in this series, as the SANDBOX Gaming duo had a rough series. After a predictable Game 1 win, the bot lane for SB fell apart in the final two games. Ghost finished 0/2/2 on Cassiopeia and 0/4/0 on Sivir. On the flip side, Aiming and Jelly went unkilled in the final two games. Aiming’s Kai’Sa finished a combined 12/0/12 in Afreeca’s wins.

We’ve seen enough good play from SB so far in 2019 not to panic over a bad week. The team is still very young and we saw DAMWON Gaming go through something similar over the middle half of the first round robin. They’ll have another shot at Afreeca Freecs next week, and if that doesn’t go well, they have a get-right matchup against the winless Jin Air Green Wings.

Player of the Week: Sword

You could pick a Griffin player every week for this award, but this week it was Sword who stood out in his performances. Often thought of as a complimentary piece to the stars Tarzan, Chovy, and Viper, Sword’s versatility cannot go unnoticed for what he brings to Griffin.

In his four games in Week 5, Sword played Yorick, Sion, Jayce, and Urgot. Those are four very unique play styles: melee split-pusher, full tank team fighter, ranged lane bully, and classic bruiser. Not only did he pilot all of these champions and play styles, he did it while dying only once in the four games. His combined K/D/A for the week was an astounding 20/1/17.

Now, of course, Griffin players are going to be near the top of all statistical categories because of how they blow teams away, but it’s impressive how much Sword is doing with a smaller economy. His gold share and kill share is lowest among regular LCK top laners, as the team never really plays around him in particular. Still, he remains tops among LCK top laners with a 7.57 KDA while often playing tanks for the team.

He may be underappreciated, but Sword is integral to the success of Griffin and part of what makes them the current best team in the world.