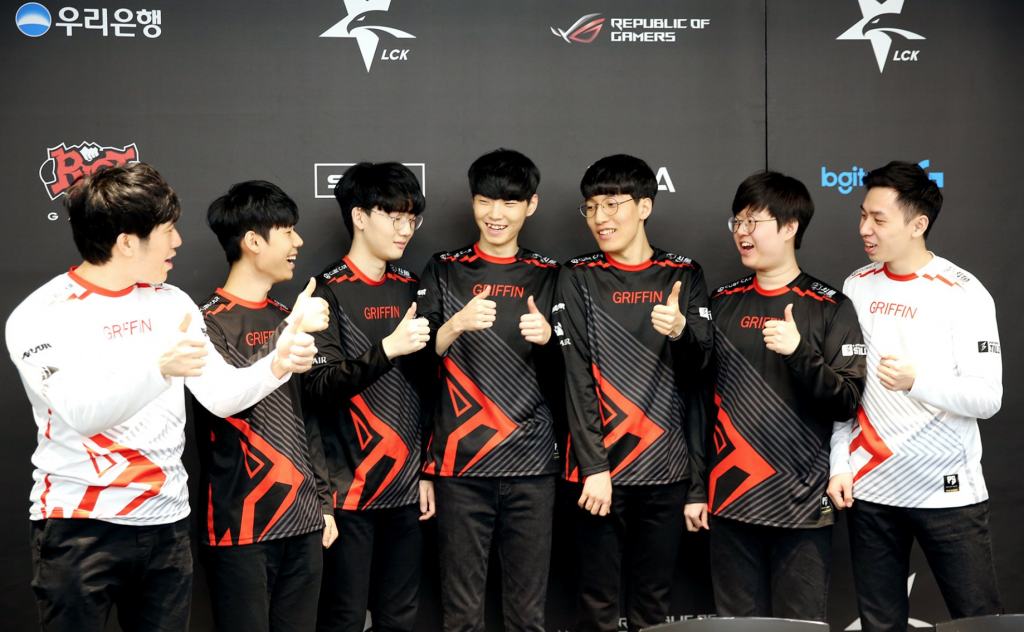 Week 3 in the 2019 LCK Spring Split is in the books. Griffin continues to roll, while Jin Air Green Wings are still winless.

Week 3 in the 2019 LCK Spring Split is done, and we’re starting to see some separation between the teams. Griffin sits atop the standings, while Jin Air Green Wings are the only team yet to pick up a match win. We take a look back at the match results, top storylines, best plays, and standout individual performances from the past week in Korea.

This was supposed to be the big match of the LCK season. Griffin, the rising stars of the world and the team that Korean fans wish had made it to Worlds 2018, versus SK Telecom T1, the new superteam revamped around Faker. Sure SKT lost to SANDBOX Gaming, but perhaps they were overlooking the young squad and needed just another week to put it all together?

This one was not close.

We can’t say that SK Telecom T1 got perfect game’d in the opener, but they were about as close as possible. Griffin picked up all 10 kills in the game, took down the only 7 turrets, and took Rift Herald. SKT were two infernal drakes and a Baron away from getting absolutely nothing in the game.

Griffin were in total control from start to finish, taking the fights that they wanted and leaving SKT scrambling on the defensive. Griffin’s run-forward-at-you squad of Sion, Aatrox, Lissandra, and Kai’Sa fared better than SKT’s tag team of Urgot and Olaf. Teddy almost doubled every other player’s damage dealt to champions on Viktor, but it was Viper who was on cleanup duty, finishing the first game 8/0/0.

Game 2 was much of the same. Griffin left open Cassiopeia, allowing Teddy to pick up the highly contested champion. SKT managed some kills in this one, including a nice combo by Faker’s Irelia to pick up a kill on Sword’s Jayce in the bot lane. But once again, SKT were unable to convert any turret kills. That is especially impressive considering they were the ones to take down Rift Herald this game.

Griffin were just too good at being everywhere on the map at once, a great feature of picking Galio and Nocturne on the same team. They could pop over to either side lane and help whoever was having to face Faker’s Irelia or Khan’s Viktor. Clid wasn’t able to get anything done in the series, finishing with a forgettable 0/5/0 in two Olaf games.

While disappointing for SKT, this is not a death sentence for the squad. Griffin are definitely that good, but we expected that SKT would need some time to figure things out with so many new players. Their lanes are stronger than ever, but Griffin exploited them on map rotations and by proper fight selection. These are things SKT should get better on as they have more reps playing together on stage and in scrims.

Sandbox Gaming Take a Game off Griffin, But Fall 2-1

Now we know that Griffin CAN be beaten, so let’s take a closer look at Griffin’s only game loss of the 2019 season.

First, we have to start with the draft. Griffin left both Akali and Cassiopeia on red side. That’s a fine strategy, right? They let SB take whichever one they prefer, pick the other, and pair it with a strong pick like Sion, Aatrox, or Lucian.

Instead, Griffin take both Sion and Aatrox, leaving Akali and Cassiopeia both to SB. Now they almost certainly don’t value these picks as much as the other teams in the league, as they often leave Cassiopeia unbanned, but was this a test? Did they want to see how outrageous of a team composition they could give up and still win? It’s hard to salute the draft of SB without wondering what Griffin were thinking, as no other team would be willing to give up that combo.

First Blood also came easily for SANDBOX Gaming. Lehends took a leisurely stroll down the river to get a trinket ward on infernal drake and fell into the waiting arms of OnFleek’s Lee Sin and Joker’s Galio. He was instantly killed during the crowd control chain, giving SB the early lead at 6 minutes.

SB were then able to pick up that infernal drake just 2 minutes later. Using their lane priority and knowledge of Griffin on the map, they were able to secure it before Griffin could even contest. An early infernal ensured that SB would scale well into the game and could more easily deal with the beefy Griffin frontline of Sion, Aatrox, and Shen.

Now at 10:25, we are reminded how good Griffin are individually. They gave Dove — one of the best performing LCK mids at the moment — Cassiopeia and had Chovy pick Leblanc into him. Leblanc is not great into Cassiopeia because of Cass’ ground on her W Miasma. However, that does not stop Chovy from making Dove look silly, as you can see here:

If Griffin have been vulnerable in any one area as a team, it’s been in the early game. SANDBOX Gaming did a good job of punishing that in this Game 2. They picked up all three outer turrets at 17 minutes into the game, surrendering none to Griffin. Having lane priority in every lane and using it is a beautiful thing.

SANDBOX Gaming played the rest of the game out methodically. They took every elemental drake as it spawned, kept their waves pushed, and never gave Griffin an opening to get back into the game. SB finished the game by taking all 11 turrets without conceding a single one to Griffin.

To be fair to Griffin, they crushed the other two games of the series: 16 kills to 4 in Game 1, and 16 kills to 2 in Game 3. But the most important note from this series is that Griffin are not unbeatable. Oh, and SANDBOX Gaming are also pretty good.

Nobody is going to accuse Kingzone DragonX of being a finished product. Their games this week against DAMWON Gaming and Gen.G were sloppy, bloody, and — at times — downright confusing. But here they are at 4-2, good for 4th place in the LCK.

The 2-0 win against DAMWON Gaming was certainly a surprising upset. Game 1 was a very long affair, lasting 44 minutes with the teams equal at 20 kills apiece. DWG held the gold lead even as their Nexus fell, but were unable to fight through the late game of Sion and Jax with Nuclear’s Ezreal poke.

Cuzz was the star for KZ in their Game 2 win, racking up a 6/1/2 score on Camille. His playmaking secured KZ early elemental drakes and Rift Herald, accelerating the game to make sure that KZ didn’t have to go late with an early game composition. They were able to close it out in only 32 minutes.

PawN has played better than expected. Certainly not to his past form, as he ranks in the middle of the pack for most statistics in terms of LCK mid laners, but he isn’t totally washed up as was feared before the season. He may not be the same dominant laner that he was in the past, but the experience he offers in the middle of the map is unquestioned. In addition, he has shown a wide champion pool this split, picking the full range of Sion, Leblanc, Akali, and Talon in the past week.

We still know that things on KZ clearly run through the bot lane, leading us to our player of the week.

Player of the Week: Deft

Deft isn’t going to be near the top of the charts for KDA because of weaknesses on the rest of his team, but he has played incredibly well to get Kingzone DragonX to 4-2 so far. He is getting the 2nd largest gold share among ADCs at 24.4%, but he’s using that to participate in 73.7% of KZ’s kills.

Across his five games this past week, Deft accrued an 18/10/21 K/D/A. His 8 unique champions played in 13 games is tops among AD carries in the LCK. This week alone saw him play Kai’Sa, Ashe, Sivir, and Ezreal. Deft is playing whatever the team needs and is well on his way to propelling KZ to the playoffs.