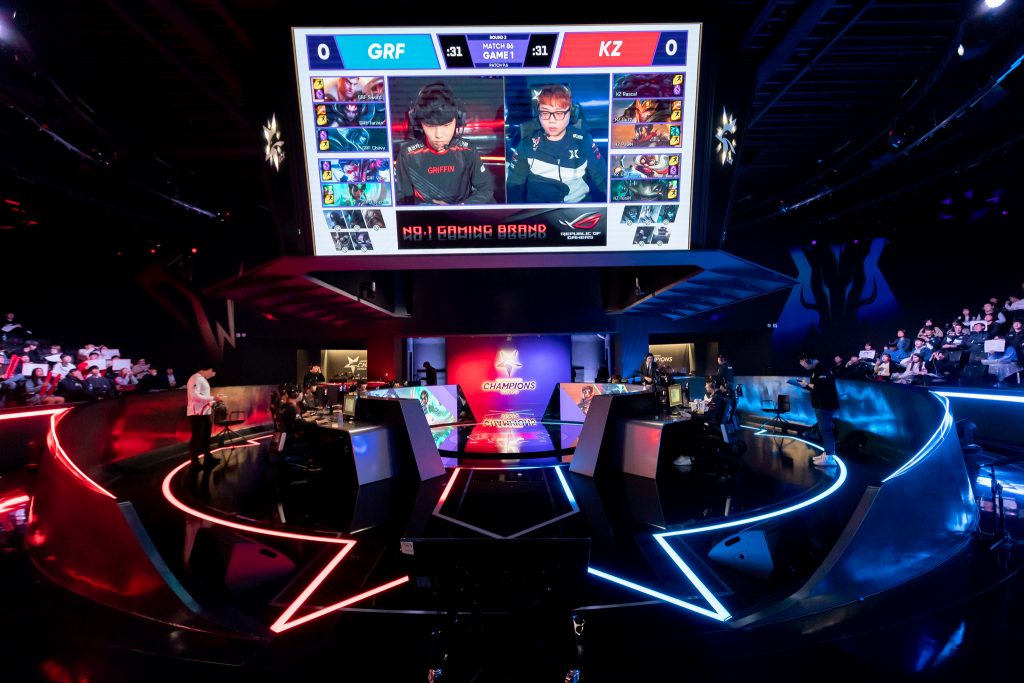 The regular season in the 2019 LCK Spring Split is done. DAMWON Gaming secured the fifth and final playoff spot, while KT Rolster will join Jin Air Green Wings in relegations. We look back at the match results, top story-lines, best plays and standout individual performances from the past week in Korea.

This series started off as the season did in the 2019 LCK Spring Split. Griffin absolutely dominated the early game in the opener, looking like a team that was head-and-shoulders above one of the top contenders in Korea. Lee “Tarzan” Seung-yong’s Elise was everywhere. He secured First Blood on Moon “Cuzz” Woo-chan’s Jarvan IV and hit a great cocoon on Heo “PawN” Won-seok’s Corki to set Griffin up for a three for zero kills exchange.

Griffin looked to be comfortably in control at 15 minutes. Up 5-kills-to-0, 3-turrets-to-0, and 4k gold already, Kingzone DragonX needed to make a play. They decided to four-man dive bot, picking up a kill on Park “Viper” Do-hyeon’s Vayne for Kim “Deft” Hyuk-kyu’s Viktor. The play itself didn’t turn the game around, but it was important to see KZ make a proactive play, especially one that benefited their star carry Deft and set Viper behind.

Griffin started up an ocean drake at 22 minutes, needing to deny a second from Kingzone DragonX. They secured the drake, but the shifting game state was clear. When grouped as five, KZ were stronger despite a 4k gold deficit and took the resulting fight 2-kills-to-0.

With the numbers advantage and an earlier mountain drake, Kingzone DragonX rushed down Baron. Tarzan attempted a smite steal, but Cuzz secured it for KZ. Kim “Rascal” Kwang-hee’s Ornn went down in the aftermath, but that’s a trade that KZ wins every time.

Another Baron attempt by Kingzone DragonX at 30 minutes was the last big fight of game one. Tarzan could not get close enough to attempt a steal with Jeong “Chovy” Ji-hoon’s Lissandra still dead, but Griffin didn’t stay far enough away to dissuade KZ from engaging afterward. Rascal’s Ornn chased Griffin down and KZ picked up three kills and the game. KZ conceded only one kill after giving up the first five to begin the game, finishing 10-kills-to-6 in 32 minutes.

Griffin clearly did not feel their game one composition was the issue, as they drafted almost identically in game two. Chovy, Choi “Sword” Sung-won, and Son “Lehends” Si-woo all reprised their roles on Lissandra, Jayce, and Karma. Tarzan swapped the early game ganker Elise for the early game ganker Jarvan IV. Only Viper’s Vayne to Ezreal swap was a significant adjustment, offering him more self-peeling and poke in exchange for hyper-carry late game.

This time it was Kingzone DragonX getting off to the fast start. Cuzz set up a dive top on Sword to pick up First Blood and deny gold and experience from Sword’s Jayce bully matchup. Early priority bot from the Lucian into Ezreal matchup allowed them to secure the first infernal drake spawn without contest from Griffin.

Griffin fought back after an overzealous invade from Cuzz on top side. He engaged on Tarzan at Griffin’s red krugs, trying to use Shen and Ornn ult to create a numbers advantage. The timings were all disjointed, though, and Griffin burst through him before help could arrive. PawN then teleported too late, gifting Griffin another free kill and a temporary gold lead. Those three would be the last kills that Griffin would get in the series.

Kingzone DragonX were the team finding picks throughout this game, using their incredible CC to punish the positioning of Griffin. By virtue of again having the superior 5v5 composition, KZ locked down vision control around Baron at 28 minutes. KZ started Baron and secured it with Ornn’s Unsealed Spellbook Smite despite another steal attempt from Tarzan.

Kingzone DragonX picked up four kills on the back end of the Baron take and quickly pushed down mid inhibitor. A KZ reset led to another uncontested inhibitor take bot. Griffin then had to make their final stand at the top inhibitor, as going down three inhibitors is a death sentence.

Chovy bought as much time as he could in the middle of Kingzone DragonX’s team, but Griffin lacked the damage and follow-up to do anything with it. KZ quickly picked up kills on Chovy and Sword and melted through Griffin’s Nexus turrets. KZ secured the series and third place in the LCK playoffs with a 10-kills-to-4 win in 33 minutes.

In addition to giving Kingzone DragonX the third seed in name, it should also cement them as the clear non-SK Telecom T1 or Griffin threat to win the 2019 LCK Spring Split. Yes, they had the better team fight composition in both games, but it was still impressive to see them take team fights against Griffin and win them despite being down in gold. Deft is playing at an MVP level with another deathless weekend (4/0/10 combined K/D/A) and PawN looks rejuvenated in outshining Chovy.

Griffin were clearly looking to work on their early game, but it didn’t pan out in this series. They built a strong lead in game one but didn’t snowball it before throwing it away. They’ll likely revert to stronger scaling compositions in the LCK Finals, but that lack of multi-dimensional play and win conditions could come back to haunt them.

Needing a series win in one of their final two matches in week 10, DAMWON Gaming took care of business in both to lock into a first-round playoff matchup with SANDBOX Gaming.

A 2-0 over Gen.G was followed by a 2-0 over KT Rolster. In each series, DAMWON Gaming had a convincing win and a win that dragged on for over 40 minutes against the two non-playoff teams. Heo “Showmaker” Su looks ready for the spotlight, putting up a combined 15/3/19 K/D/A over the four games.

To play Nuguri and Canyon both in such crucial games offers insight into what DAMWON Gaming might be thinking as they enter the playoffs. They are the high upside plays, but look for one of Flame or Punch to be inserted if the team is struggling with their macro play.

FAKER’S STILL GOT IT

Even if fans identify Lee “Faker” Sang-hyeok as the best to ever play League of Legends, even his most ardent supporters would admit that Chovy has had the better individual season.

But that doesn’t mean that Faker is not still incredible:

With the rebuilt lineup of Kim “Khan” Dong-ha, Kim “Clid” Tae-min, Park “Teddy” Jin-seong, and Cho “Mata” Se-hyeong, we’ll finally get to see Faker back on the biggest stage. Don’t think just because Chovy and Griffin had an incredible split that Faker has lost anything. He hasn’t. He’ll have his chance to showcase that and more in round three of the LCK Spring Split playoffs.

PLAYER OF THE WEEK: DEFT

Deft was robbed. Chovy was given match MVP in his final game of the season against Jin Air Green Wings to break a tie with Deft in season-long MVP points. Chovy went 0/2/5 on Zoe that game. Chovy should not have been named the MVP of that game.

Regardless, Deft will still be Co-MVP of the 2019 LCK Spring Split in our hearts. He earned it with his play against Griffin in their third place clinching series in week 10. His 4/0/10 combined K/D/A was impressive enough, but consider that he and Park “TusiN” Jong-ik held Viper to a 0/4/1 K/D/A over the two games. That’s a 0.25 KDA for a player who averaged 8.69 on the season, tops among ADCs in the LCK.

Deft was not tops among LCK ADCs in any statistical category, but he was elite in all of them. The team has run through him all season long and we don’t expect for that to change in the playoffs. Kingzone DragonX will go as far as Deft can carry them.