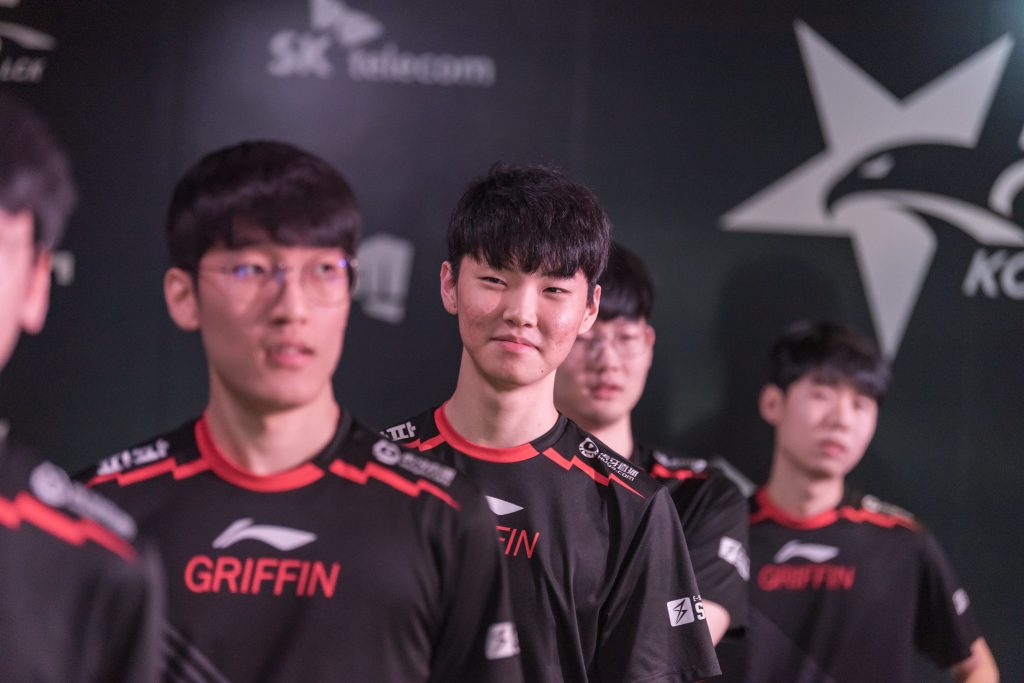 With the LCK’s penultimate round in the books, the image of Summer is nearly complete. Only two places have been confirmed so far, with returning frontrunners Griffin clinching playoffs, and Jin Air Green Wings bracing for a return to the promotion tournament.

With teams like Sandbox Gaming, Damwon Gaming, and SK Telecom T1 still battling for places at the top table, and KT Rolster and Hanwha Life Esports scrambling to avoid the drop, Round 9 was another critical week. We take a look at the LCK’s second last week.

First-seed is Griffin’s to Lose

There was a period where it looks like Griffin were heading on a similar crash-course to Kingzone DragonX. Now a three-series win streak against Sandbox, Gen.G, and Kingzone have righted the ship for the young LCK darlings.

Jeong “Chovy” Ji-hoon led the way in the opening series against Gen.G with a mid lane Jayce pick. Although kills were sparse for the early-game power pick in the 8-1 win, Chovy made his presence on Summoner’s Rift known as he dolled out massive poke damage.

Gen.G struck back in the second game with an 11-8 win, before Lee “Tarzan” Seung-yong ran rampant on Olaf in the deciding game to seal the 2-1 victory.

Griffin’s jungler popped up again in the key game against Kingzone two days later, this time as the building block at the base of the team’s 17-1 win. Tarzan played Skarner to grab picks, after finding similar success on engage-tank Sejuani in game one.

The valuable 2-0 weekend fired Griffin back up the top-table glut in Korea. The young team have once again found themselves in first atop the standings, and that power move has come at just the right time to lock the grand final bye.

Griffin has just two games left in the season: JAG (0-17) and Hanwha Life (5-11). While Hanwha may provide a slip-up considering they’ve been claiming major scalps in recent weeks, not least of all SKT and Damwon, JAG is all but a free win.

With a dominant game difference over their close competitors, all Griffin has to do is collect two more 2-0 series wins and they’ve locked in one of two places in the final. From there, they’re just inches from qualifying for their first international event.

SKT Slip at the Final Hurdle

While Griffin bagging a 2-0 weekend certainly helped them ascend back into first, SKT’s major slip-up against relegation-threatened Hanwha was the mistake that left the door open for the young team.

This 2-1 defeat was a particularly shocking one too. SKT was the undisputed form-team of the region, winning nine straight series and eighteen straight games on the Rift. Hanwha had one just three series all split, and two of those were 2-0 victories over JAG.

It wasn’t a clean-sweep defeat for SKT, but the team that had all but locked first off the back of their undefeated run looked lost against the bottom team. Kim “bonO” Gi-beom ran the show on Skarner in game one, and Gwon “Sangyhoon” Sang-yun shone in game three.

SKT were able to nick a game result in the second outing, with Kim “Khan” Dong-ha and Kim “Clid” Tae-min breaking open the game with top-side pressure on Aatrox and Sejuani, before bot lane hyper-carry Park “Teddy” Jin-seong clicked into high gear on Kai’sa.

One problem for SKT as they fell to their first regional defeat since the last month of June was that superstar commander Lee “Faker” Sang-hyeok just simply didn’t turn up for the contest. He died 11 times in 92 minutes over three games, and scored only six kills.

His deaths contributed to just over a quarter of SKT’s entire eliminations throughout the three-game series. It’s a worrying sight for the team, who have often called on Faker to bail them out of tight spots when their backs are against the wall.

A small sight of solace will be that when Faker wasn’t firing on all cylinders, Teddy and Khan were able to lead the way in game two. The fact they couldn’t bring that same power to bear in games one and three is a concern, however, and one SKT may need to solve quickly.

Now, SKT is faced with an uphill battle. The defending champions meet Sandbox and Damwon in the LCK’s closing week and must score at least one to win make sure they enter the Korean finals gauntlet.

After their Hanwha defeat, an 0-2 weekend could be disastrous.

Speaking of disastrous, KT Rolster is in trouble. The roster surely thought they did enough to avoid the promotion tournament when they ousted Hanwha Life 2-0 just a few weeks ago.

Since then, their relegation rivals have bagged victories over second-placed Damwon and former league leaders SKT. The wins have kept HLE level with KT, and in the lead to guarantee their place in the LCK in 2020 with a positive game difference.

After being swept by Damwon early in Week 9, KT bounced back with a 2-1 victory over JAG. While a win is a win for the team, to drop a map to Jin Air is a worrying sign. The last-placed roster has won just four times on the Rift all season, including the game against KT.

The two maps that KT did win were impressive, however. Gwak “BDD” Bo-seong claimed his favorite champion Azir, and stormed to a 10/1/8 statline as KT climbed to a 12.5k gold lead in the 29-minute victory.

“This was a must-win game for us,” said the KT mid laner in the LCK post-match interview. “There’s no counter against Azir in mid lane so I love to get it. We are in a very risky position right now so we just needed to do our best, and we need to win all our series.”

With fixtures against Sandbox and Kingzone next round, while HLE plays Afreeca Freecs and Griffin, KT needs an upset to survive the split. If things stay on course right now, the storied organization will once again be battling for survival in the promotion tournament.

These are two of the biggest games of KT’s recent history. Every game matters for tiebreakers and a strong result could save their season. Now it’s just a matter of them getting out on the Rift, and proving they have what it takes to win when it really matters.

Game of the Week: SK Telecom T1 vs Damwon

With their playoffs suddenly on the line again with their upset loss against Hanwha Life, SKT need a result against either Damwon or Sandbox in the final week. This feature match could have been either, but with Sandbox smashing SKT 2-0 last time out, the champions have more of a chance to collecting a result against Damwon first up on Thursday.