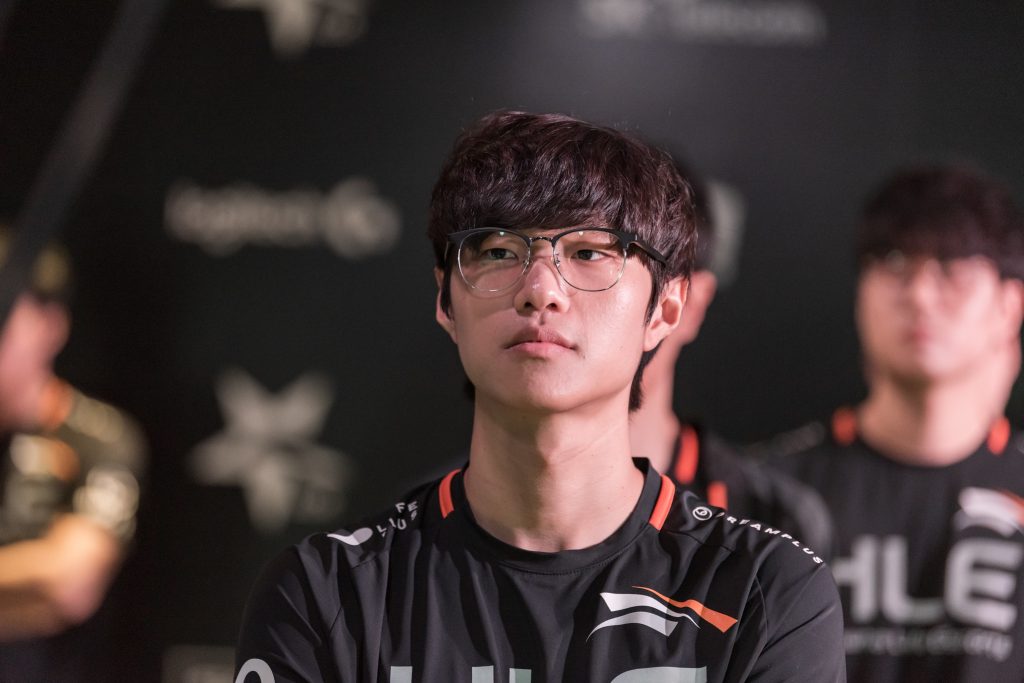 Hanwha Life have kept their LCK season alive with a momentous upset over Damwon. Image via Riot Korea.

A new leader has been crowned in the LCK after a series of shocking upsets in Week 8, while the fight to avoid the relegation tournament still hasn’t been settled between Hanwha Life Esports and KT Rolster with just two rounds to go.

We break down the fight for first, and the scramble to stay in the LCK for 2020, after the league’s eighth week of play.

Both Hanwha and KT refuse to drop

Just when we seemed to have found a winner from the relegation scrap early in Week 8 after KT downed Hanwha, the ninth-placed team whipped out one of the most surprising series of Summer so far.

Kim “bonO” Gi-beom was the linchpin of Hanwha’s 2-0 win on Sunday evening, applying a heaping of early-game pressure into Kang “Tempt” Myung-gu and Kim “SoHwan” Jun-yeong’s lanes in the opening map. The pressure top paid off big time.

With a 3/0/1 scoreline, bonO extended his influence on Jarvan IV to the rest of the Rift, leaving SoHwan on Irelia to push his advantage in the solo lane.

Just fifteen minutes into the game, bonO’s rapid pace had ballooned HLE’s lead to 5k, and the scoreline to 5-0.

From there, HLE’s jungler spread the love to Gwon “Sangyoon” Sang-yun on Kai’sa in the bot lane, accelerating his scaling until he was dishing out piles of damage as a 6/0/1 marksman.

With the power of bot lane unlocked, Hanwha ended in just 33 minutes.

Armed with a playmaking Sejuani in the second map, bonO didn’t give Damwon a moment of breathing room. With their backs against the wall, the league leaders went for a risky 50/50 Baron play 29 minutes into the game.

The four-man call was disastrous. Tempt killed Sin “Nuclear” Jeong-hyeon immediately, before flash-Pop Blossoming into the rest of the team to deny their escape from the pit. With the Baron already leashed, Hanwha finished the purple worm and pushed for the end.

The clean sweep had a dual result – Damwon dropped out of first place, and SKT moved right into pole position in Week 8. At the bottom of the table, KT Rolster (4-10) is once again set to feel the heat as HLE inched onto a 4-11 record.

A shock upset for Damwon has dropped them right back into the chasing pack. Image via Riot Korea.

Damwon drops back into the championship pack

Hanwha’s glory is Damwon’s defeat, however. After marching from ninth place in the opening round to first last week, Damwon has slipped up to drop their top spot.

Things looked so hopefully for DWG after they forged themselves a one-game buffer over Sandbox Gaming and Gen.G. Now their surprise loss to Hanwha Life locks them right back in the four-way race that adds SKT to the mix.

All four of the challengers are tied on the ladder at 10-5. SKT, who just a few weeks ago was nearly caught in a relegation battle with Hanwha and KT, now control the top spot with their superior game difference.

SKT’s rise has been the most shocking of them all. While the defending champions have had help from other places – including the decline of Kingzone DragonX and Griffin in recent weeks – they were still called on to win the majority of their series.

In the past five weeks, they’ve done just that. With 2-0 results over Kingzone and Afreeca Freecs this round, SKT push their win-streak out to nine. After sitting outside of the battle for first for most of the season, the veteran org has re-entered as favorites.

With a host of key fixtures over the next two weeks – not least of all SKT vs Damwon, Gen.G vs Damwon, and SKT vs Sandbox in Round 10 – the title race is far from over. Considering Gen.G and Damwon meet on the last matchday of the split, it may come down to the wire.

Kingzone – from contenders to pretenders

At least with Damwon’s recent downturn in results, they’ve dropped back into the race. Even Griffin, who has had a mixed middle of the split, still only sits a single win off the tie at the top.

With things in the title race so close, Kingzone DragonX’s two-game deficit on the leaders seems distant. In the standings, it is; despite having an 8-6 record, Kingzone lag in seventh place. As it stands, KZ would not even qualify for the postseason gauntlet.

The star-studded roster copped a 2-0 loss to the surging SKT to open the week before Sandbox Gaming brushed them aside to close Round 8.

The glimmer of hope for Kingzone is that none of their losses have been lopsided stomps.

They matched SKT 8-14 and 7-11 on Thursday and battled to the last against Sandbox 5-9 and 3-10 in their second loss. In both series, they were able to hold out for more than 35 minutes on every map.

The team must look to veteran star Kim “Deft” Hyuk-kyu if they want to dig their way out of the hole. Even as his team finished 0-4 for the week, Deft scored an overall KDA of 11/10/7.

It’s not the best scoreline a player has ever chalked up, but to collect half of the team’s kills in four losses shows at least Deft is finding chances. If Kingzone wants to change their storyline for the final weeks of Summer, Deft must step up to the plate.

Game of the Week: Griffin vs Kingzone DragonX

It’s do-or-die for Griffin and Kingzone on Sunday evening. Both sides have fallen out of grace in the LCK in recent weeks, and though both have held the first-seed position at one point or another in Summer, they’re now facing the possibility of missing playoffs altogether.

This Sunday evening battle will be key. The loser of this series will have a lot of ground to make up on their position, while the winner launches themselves up the standings. It’s not finals quite yet, but for these two orgs it might already feel like it.