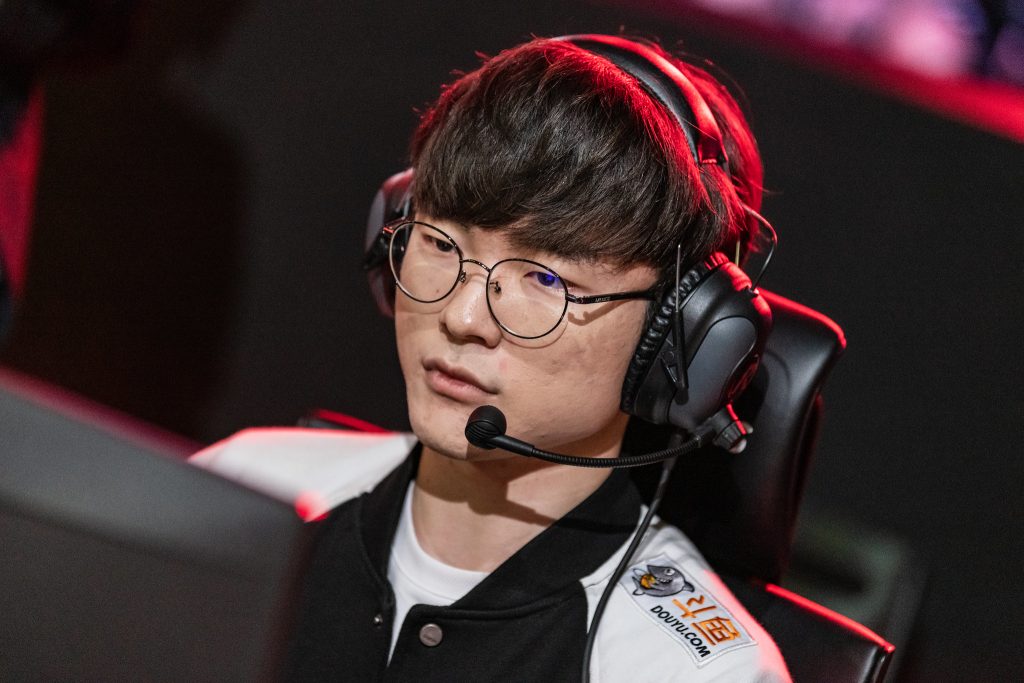 Lee “Faker” Sang-hyeok has so far kept his promise to go undefeated in the second round of the LCK. Image via Riot Korea.

Week 7 of the LCK Summer season is upon us, and we still have no clear favorite for the top-seed in Summer. Damwon Gaming and Sandbox Gaming are certainly setting the pace, with the former taking control of first this round.

However, behind them wait a trove potential challengers, from defending champions SK Telecom T1 on a seven-series winning streak, a Gen.G roster that has fired up their ‘gauntlet buff’ early, and the young stars of Griffin. We take a look at where the challengers sit this week.

Lee “Faker” Sang-hyeok had a simple promise to the rest of the LCK four weeks ago after SKT had rolled over KT Rolster 2-0 in the Telecom Wars: his side was going to win “all matches in the second round of Summer Split.”

At that point in the season, SKT had just snapped a five-game losing streak. They would go on to sweep Gen.G 2-0, then head into a successful Rift Rivals tournament. This weekend the defending champions beat Gen.G again and defeated Griffin in a high-stakes 2-1 series.

Since Faker issued his promise—or maybe his warning—SKT has won twelve games, and fallen just once to Griffin. Outside of the 16-5 loss on Sunday evening, SKT’s last map-defeat came in a 2-0 loss to the same team on June 22.

The entire three-game series certainly lived up to the hype of another Spring final rematch. SKT edged the first map 6-3, but neither side could grab more than a 1K gold lead until the final moments.

Faker bounced out to an early lead on Corki after Lee “Effort” Sang-ho caught Son “Lehends” Si-woo in the river, and nearly edged to a 2/0 start with a second on Jeong “Chovy” Ji-hoon. The single elimination was more than enough for SKT’s mid laner though.

Park “Teddy” Jin-seong wasn’t far behind Faker for a kill, notching SKT’s second through a three-man bot lane dive to send Lehends back to the spawn platform again.

It’s been all smiles for SKT in the past few weeks. Image via Riot Korea.

From there, SKT was able to exert aggressive pressure across the map and sealed the deal with a 3-0 teamfight in the mid lane that spilled over after 32 minutes of patient play from the defending champions.

The victor’s 13-5 game three win wasn’t much faster than their game one triumph, with Teddy combining with Kim “Clid” Tae-min for ten of the team’s thirteen eliminations.

A messy battle across the entire bot side of the map saw SKT catch three Griffin players off Teddy’s scattered Xayah feathers, and the ensuing Baron-buff gave the roster enough push-power to close out the deciding map against a now-fourth-placed Griffin.

These two cool, calm victories for SKT are perhaps the best litmus test for the champions in weeks. The team may be on a seven-game win streak, but their run of double wins over KT and Gen.G and victories against Jin Air Green Wings and Hanwha Life Esports suggested they may just be ousting mainly bottom-tier teams in Summer.

This 2-1 win over Griffin speaks volumes about SKT’s resurgence. Defeating LCK’s Spring runners-up is no mean feat, though the young roster has been on a short slide since Rift Rivals. With confidence at their backs, SKT needed the edge moving forward.

The real trial for this refreshed SKT roster comes in the final run-in to finals. Next week they will come face-to-face with playoff contenders Kingzone DragonX and Afreeca Freecs, before a half-week battle against Hanwha in Week 9.

Then comes a mountainous challenge, and one SKT may well need a ten-series win streak to match.  Week 10’s opening fixture sees them meet first-placed Damwon (10-3) before they close out the regular season with a high-stakes match against Sandbox (9-4).

If SKT wants to complete their second-round reversal and punch their tickets to a lofty finals seed, the next three weeks and how they implement the momentum they’ve earned from their 2-1 win over Griffin will be key. Slip up now, and Worlds may be a distance too far.

Yeah, you read that right—game two of the first-vs-second clash between Damwon and Sandbox was all but decided by a Baron Nashor steal by Cho “Joker” Jae-eup on Yuumi.

Cho “Joker” Jae-eup nearly sealed a series win for Sandbox with his miracle steal on Yuumi. Image via Riot Korea.

Sandbox were struggling to find their way into the second game, having already dropped the first in 28 minutes. Heo “ShowMaker” Su had blown open the first meeting between the two squads on Friday evening, and Damwon were on their way to a clean 2-0.

Damwon were burning down Nashor, with most of Sandbox well out of position for the contest. Joker arrived first on the Magical Cat and fired off a hopeful Prowling Projectile. The skill-shot dodged between Damwon’s assembled roster and struck Baron.

The massive neutral objective had been burned to just 61 health at this point, and Yuumi’s key damaging attack was more than enough to deliver the final blow to the purple worm. The Baron-buff gave Sandbox the foothold they needed, and 14 minutes later they won the game.

Now, if Sandbox’s momentum had carried into game three and a potential reverse series win, we could be looking at Joker’s skillful Prowling Projectile as the moment that decided his roster’s ladder-leading position.

Instead, we returned to our regularly scheduled ShowMaker carry, as Damwon’s mid laner claimed his second MVP nomination of the evening to fire himself to the top of the season’s individual award standings.

Game of the Week: Sandbox Gaming vs Griffin

Griffin are in trouble, there’s no denying that. After a 7-1 start to the LCK Summer, the team is watching their international aspirations drain away off the back of a 1-4 run since the start of Week 5. With just a single game next round, Griffin could face the prospect of a single 2-0 win over ninth-placed KT propping up their five-round slide.

With Sandbox battling for the top spot in Korea, Griffin will have to be on their A-game if they want to challenge the title hopefuls. With Kingzone and Afreeca both lurking behind in sixth, Griffin could even find themselves plummeting out of playoffs altogether with a loss.