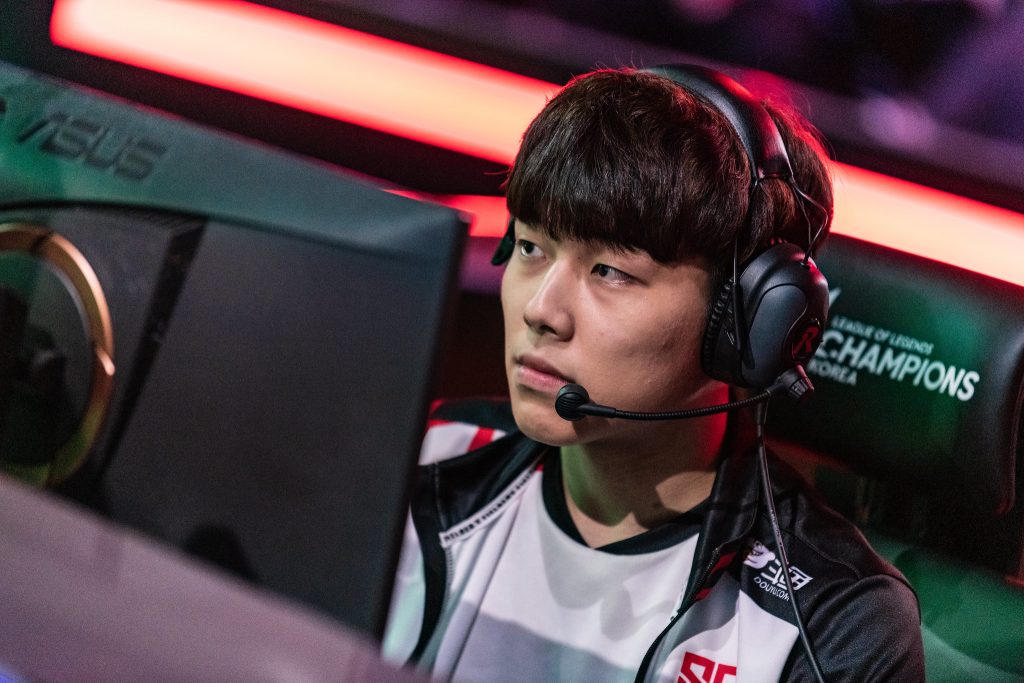 There have been many exciting title races in League of Legends Champions Korea over the years. LCK 2019 Summer may be shaping as one of those instant classics, with four teams still right in the mix for the top spot, while more veteran organizations lie in wait below.

With Griffin falling to a 0-2 week post-Rift Rivals, and Damwon Gaming ousting Sandbox Gaming in their Thursday meeting, first place is anyone’s again – if they want it. We look at the contenders for the Korean throne after the LCK’s fifth round.

No Clear Kings of LCK this Time Around

This can be taken as a positive, or a negative, but it’s become very clear in LCK 2019 Summer there is no ‘best team’ reigning in Korea anymore. Gone are the days when SK Telecom T1 were the indomitable kings of the Eastern region.

No longer, even, do old organizations like SKT, KT Rolster, and Samsung cast their shadow over everyone. Now, we have a proper battle on our hands for the crown. It might still be a little early, but this split is shaping up to be one of the most exciting Korean campaigns on record.

Right now, Sandbox Gaming holds the advantage in the race with an 8-2 record. The rising roster, led in Summer by unstoppable top laner Park “Summit” Woo-tae, moved into their lofty leading spot with a 2-0 victory on Jin Air Green Wings on Saturday evening.

What makes this split so interesting, however, is that they’re not a clear best team despite their best record. The clean sweep over JAG came just two days after Sandbox were rolled off the Rift by second-placed Damwon Gaming (7-3).

Damwon’s 2-0 win over Sandbox could have been a potential table-topping fixture, and Sandbox have taken the top spot after this week. In the 55 minutes the two teams played out their games, however, it was all Damwon.

After all was said and done, Damwon had clocked up a 27.6k gold lead across both games combined.

Comparing Damwon and Sandbox after their head-to-head this week leaves out two more important teams. Griffin and Kingzone DragonX (both 7-3 in second place) may be even more title favorites than the two young teams that battled it out on Thursday evening.

Damwon Gaming may have beaten Sandbox on Thursday, but Kingzone delivered them a 2-1 loss two days later in a weekend LCK epic.

Damwon claimed the first 24-11, with Jang “Nuguri” Ha-gwon running rampant on Vladimir. It was all Kingzone in the following two games, with Kim “Rascal” Kwang-hee stamping his authority in the clash with a 6/0/3 performance on Kennen. Kim “Deft” Hyuk-kyu sealed the deal in game three with 18.9k damage to champions after clinching first blood.

Of course, this tight race for the instant bye to the grand final in Summer was made possible by Griffin falling straight off a cliff.

The post-Rift Rivals hangover seems to have hit the LCK darlings hard. A 0-2 loss to veterans Gen.G shook the title contenders. A 2-1 loss to another legacy team in Afreeca Freecs on Sunday has put the warning lights on for Griffin.

Does Griffin Lack the Mental Edge to Represent Korea?

Griffin have suffered just their second 0-2 week in their LCK career. (Photo courtesy of Riot Korea)

It’s clear now that Griffin are one of the best teams to play League of Legends right now. Emerging from Challenger Korea, the star-studded team of misfits blazed straight through the leading organizations of the LCK and claimed first place for their own.

They’re facing a pretty major problem for a team that wants to lift silverware, or is currently battling for it – they have a propensity to trip at the final hurdle.

After finishing second in their first split at the highest level, Griffin were ousted in a five-game series against KT Rolster in 2018. Six months later, they were blown off the Rift by a resurgent SKT 3-0 in the Spring decider. They even choked 3-2 against Gen.G in the regional qualifier ahead of their home-ground Worlds last year.

The roster has been to an international event just once: Rift Rivals this month. There, they were the only Korea team to drop a game in the all-important final relay against China.

FunPlus Phoenix defeated them in the third game, opening the door for a reverse sweep from the LPL representatives. Damwon closed that door again, but it showed Griffin in a new light.

Struggling once or twice in the critical games can be attributed to luck. Two grand final losses, a collapse in the regional gauntlet with Worlds on the line, and losing in the most important game of their Rift Rivals campaign? That’s a pattern.

Now they’ve returned to their domestic realm, where their strengths lie. A 0-2 round proved otherwise, and bumped them straight back into a title fight they were all but set to run away with. It’s only the second time in their LCK career they’ve suffered a 0-2 week.

These struggles don’t necessarily mean that Griffin can be counted out for an appearance at Worlds in 2019. Jeong “Chovy” Ji-hoon and Park “Viper” Do-hyeon have still been at their very best in Summer. If the team’s two carries are ‘on’, they’re unstoppable.

It seems that Griffin’s mentality is the only thing holding them back right now. Considering many of their players emerged from the Challenger scene as relative unknowns, it’s possible the roster will take time to fully adapt to the harsh life of the professional scene.

Then again, players like Lee “Faker” Sang-hyeok exploded onto the scene with an immediate ice-cold persona that reeked confidence. He proved on the Rift that he could handle the biggest moments the game could throw at him. He became a World champion because of it.

With the 2019 World Championship looming at the end of the year, and another international tournament potentially slipping out of Griffin’s reach, they have to act fast to fix these backroom problems.

Player changes won’t alter the mental problems the players are having. Instead, there will either be a ‘click’ moment for the young stars of Korea, or there won’t be.

When the gauntlet comes around, we will know if Griffin has what it takes to represent the LCK on the world stage. If not, there’s certainly a host of suitable candidates ready to happily take their place.

Game of the Week: Gen.G vs Kingzone DragonX

Gen.G reannounced themselves in a big way this round, blowing Griffin away in a 2-0 series that moved the former Samsung-roster just a single win away from the four-way title fight. With Kingzone sitting at 7-3, and Gen.G one behind on 6-4, if the veteran lineup can make a statement with another series win against a top-four team, there’s no way they can be held out of the conversation for a Worlds spot come the end of the season.