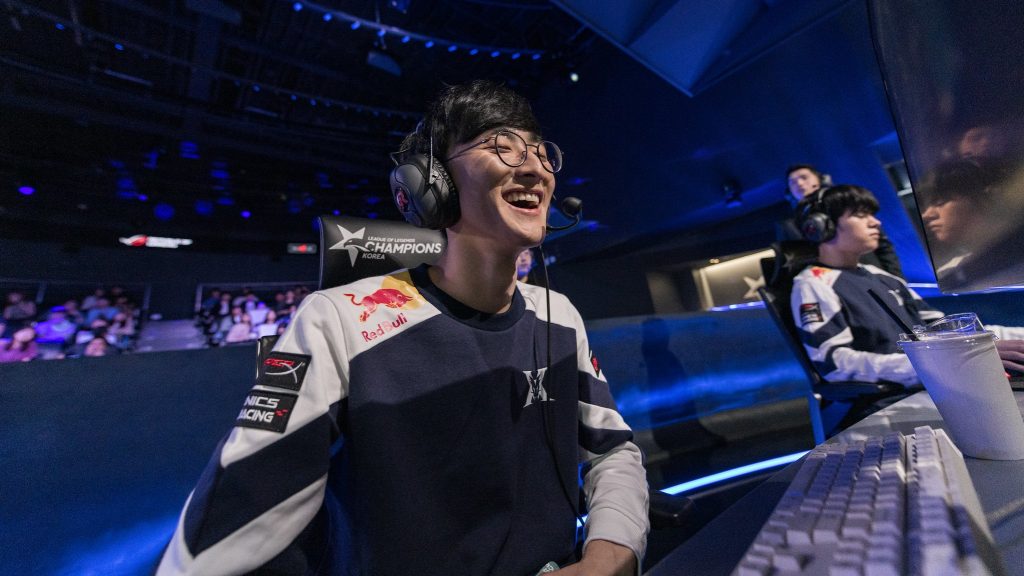 Kingzone DragonX have begun their Summer campaign undefeated and are the only roster to record back-to-back 2-0 victories in the opening week of the LCK. Image via Riot Korea.

After an exciting opening week of Summer Split, two teams are left undefeated in the LCK—Kingzone DragonX and Griffin. Of those two, KZ has yet to lose on-stage, chalking up a 4-0 map record. Let’s look at the top storylines after the first ten matches so far in Korea.

Considering some are putting Europe on the pedestal of “best region in the world” right now, it’s high praise to say that Kingzone DragonX are playing like they belong in the European Championship. They scored 2-0 wins over Gen.G and Sandbox Gaming,

Despite a clean 4-0 score in their opening week, veteran bot laner Kim “Deft” Hyuk-kyu said in the post-match press conference that the team were still looking to find their playstyle after “a number of mistakes” in the series.

“I don’t know what kind of playstyle we have, exactly, but since all five of us play a lot of solo queue we tend to study up on overpowered champions and utilize them well,” he explained.

Both KZ’s victories also saw Yoo “Naehyun” Nae-hyun, who famously suffered more than 20 straight defeats before joining Origen ahead of their shock relegation from the EU LCS, start in the mid lane due to Heo “PawN” Won-seok’s announcement that he would be taking the split off.

Any fears KZ fans had that Naehyun may have brought that previous bad luck with him evaporated almost immediately. The squad’s mid laner was one of the key leaders in the victory, first shattering Gen.G with his Jayce pick, before dominating on Ryze (4/1/7) and Neeko (5/1/8) against Sandbox.

Between the fact that KZ are bringing a wild-style meta to the traditionally controlled Korean league, and the fact their squad’s mid lane question mark has proven to be a strength, it’s fair to say Kingzone have entered the discussion as possible title favorites in Summer.

SK Telecom T1’s bot laner Park “Teddy” Jin-seong has been a shining light in what has been a poor start for the defending champions in LCK 2019 Summer. Image via Riot Korea.

After coming into Summer marked as one of the team’s to beat, SK Telecom T1 have fallen at just their second hurdle of the season. Afreeca Freecs, who themselves had started 0-1, ousted the defending champions 2-1 with jungler Lee “Dread” Jin-hyeok leading the way.

SK Telecom T1’s bot laner Park “Teddy” Jin-seong has been a shining light in what has been a poor start for the defending champions in LCK 2019 Summer. Image via Riot Korea.

Echoes of bot laner Park “Teddy” Jin-seong’s time on Jin Air Green Wings came to the fore in the three-game defeat, as SKT’s marksman shone with a 12/2/7 KDA across the entire series, and was named MVP in his team’s lone victory.

It wasn’t enough, however, to match Dread as he rampaged across the jungle. After a 4/2/6 outing on Xin Zhao in the first match, the young star had a quiet game on Lee Sin. It was his closing game on Gragas that saw him collect his second MVP of the series, contributing to 83 percent of his team’s takedowns, including securing ten himself.

After a sloppy 2-1 win over cellar-dwellers JAG on Friday, SKT should be at full panic stations. To have to play the full six games in their very first round, and then to have the second series go against them, means the three-time world champions are starting on the back foot right from click-off in the season.

There is hope for the defending champions, however. With Teddy still rolling in high gear, the team must look away from struggling solo laner Kim “Khan” Dong-ha. SKT’s top laner died 22 times in 227 minutes of League of Legends this week, including a horrible performance on early-game powerhouse Jayce. He finished 0/5/2 in the 30-minute defeat.

If the team, including mid lane superstar Lee “Faker” Sang-hyeok and jungler Kim “Clid” Tae-min, can turn their attention to their bot lane and get Teddy on unstoppable rolls early, SKT may stand a chance at clawing their way back into the title fight early in the season.

Hanwha Life Esports was just one of seven teams to start their Summer campaign with a 1-1 record. Image via Riot Korea.

LCK parity may have been restored

That was just a handful of the 1-1 weeks that LCK teams across the board scored in Summer’s opening round, with six teams now locked at a split record in the middle of the standings. Just KZ and Griffin remain undefeated, while Damwon Gaming and JAG are the only two rosters yet to score a match win in Korea.

It’s nothing but exciting to see these kinds of results in the league. While KZ and Griffin may be the two teams to beat at the moment, with much-hyped squads like SKT and KT falling into the pack early there’s every chance that the finals race will be tight, and interesting, all the way down to the wire in Summer.

Game of the Week: Kingzone DragonX vs SK Telecom T1

Kingzone DragonX were undefeated atop the LCK after the opening week and will now face a major challenge early in their campaign. Although SKT fell in the final match of Week 1, their 2-1 loss to Afreeca Freecs may have just been a blip on the radar—this clash between KZ and SKT may be a litmus test for both their Summer seasons.