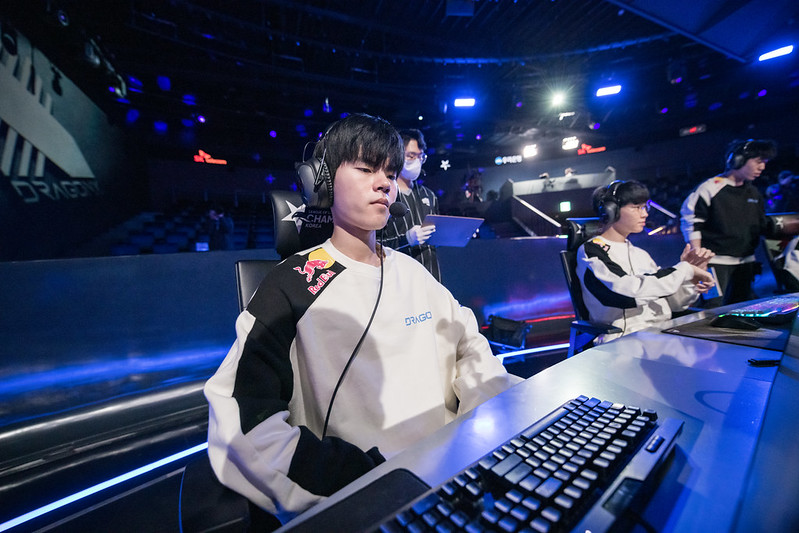 Deft and DragonX are one of three teams to start the season 2-0. (Photo courtesy Riot Games - LCK)

The League of Legends Champions Korea (LCK) kicked off their first week of the 2020 Spring Split. Afreeca Freecs, DragonX, and Gen.G all impressed in their opening matches, while T1 got the best of their rematch with DAMWON Gaming. We take a look at where things stand in the LCK by looking at the top story lines so far in Korea.

Three teams opened the season 2-0 in the LCK: Afreeca Freecs, DragonX, and Gen.G. Each of these teams made one or more major roster upgrades in the offseason, prompting us to include DRX and Gen.G as two of our off-season winners.

Though Afreeca Freecs may have missed the cut, they showed their improvement right out of the gate by winning the KeSPA Cup. That momentum has not slowed to enter the season. Kim “Kiin” Gi-in hasn’t kept up his other-wordly pace, but the rest of the team has picked up the slack. New addition Jin “Mystic” Seong-jun in particular has been stellar, fielding a 15/10/25 K/D/A in his four games played.

AF handily swept Griffin 2-0 before ending the week by beating Hanwha Life Esports 2-1. That win against HLE is much more impressive coming off the heels of HLE’s win over T1 to open the season. Song “Fly” Yong-jun and his huge champion pool is fitting in perfectly mid lane between Kiin and Mystic, playing his role of secondary carry well to start the season.

DragonX opened the season with a substitute player and Jeong “Chovy” Ji-hoon playing out of position. Choi “Doran” Hyeon-joon served his one-match suspension for intentionally feeding a solo queue game, forcing Chovy top lane while Song “Quad” Su-hyeong filled in mid lane. That brought the total to three rookies starting for DRX. It didn’t matter against KT Rolster. DRX lost the first game before bouncing back with a 20 kills to two stomp in game two. A 13 kills to five win in game three sealed the series, punctuated by a 6/0/6 Rek’Sai performance by Hong “Pyosik” Chang-hyeon. DRX then beat SANDBOX Gaming 2-1 with Doran back in the lineup. After getting crushed by Park “Summit” Woo-tae in game one, Doran bounced back to go 9/5/13 in the two wins.

Gen.G had the softest schedule of the three but also the most impressive wins. A head-scratching game one loss to KT Rolster gave way to a near perfect game win in game two. Gen.G collected all eight kills while conceding only two turrets to KT. They also led game three from start to finish, riding Gwak “Bdd” Bo-seong’s 3/0/7 Galio and Park “Ruler” Jae-hyuk’s 5/0/3 Miss Fortune.

Gen.G then beat Griffin eight kills to zero in game one, falling three turrets short of a perfect game. Griffin made game two more competitive. A triple kill by Ruler’s Aphelios gave Gen.G Infernal Soul and allowed them to close out the win minutes later.

The LCK opened the year with a series between two 2019 World Championship participants and early 2020 favorites in T1 and DAMWON Gaming. T1 may have had the weaker off-season, but they got the best of DWG in this series with a 2-1 win.

The gold was even for the first 26 minutes of game one. Jang “Nuguri” Ha-gwon’s Mordekaiser caught Park “Teddy” Jin-seong’s Miss Fortune out in the top river, leading to a two-for-one exchange in DWG’s favor. T1 attempted to stop DWG’s Baron but only fed kills to slightly delay DWG’s objective. The 3k gold swing from that series of plays gave DWG enough of a lead with their Ryze and Aphelios scaling to close out the opener 20 kills to 14 in 40 minutes.

T1 bounced back in an even more exhausting game two. DWG had the gold lead until they tried to dive T1’s top inner turret at 36 minutes. DWG took down the turret but got crushed in the ensuing fight, losing four members for one. The teams traded Baron for Elder Drake at 40 minutes to stall the game out longer. T1 finally won a team fight at 46 minutes started by Lee “Faker” Sang-hyeok’s pick of Nuguri. The death timers were long enough to allow T1 to finish the win.

The deciding game three had the least action of the series. T1 had built as large as a 7k gold lead at 29 minutes by virtue of turret kills and CS leads before allowing DWG to equalize the gold after Lee “Effort” Sang-ho was picked off, giving DWG Baron. Another NA-RAM style team fight mid lane at 41 minutes went T1’s way, allowing them to pick up Elder Drake and Baron. The resulting push earned T1 all three inhibitors and allowed them to storm the Nexus with the resulting super minions.

Our new tradition @T1LoL began last night. Team building and the bonds of brotherhood are important to us. This belt is awarded after a win to the match MVP as selected by their teammates. It bonds our new cities together and the side plates honor our past. #T1WIN #T1Fighting pic.twitter.com/3RrHSREKxR

It was not a pretty looking series by either team, but that can be expected in the first series of the year. Both teams will grow and come back stronger, but the lack of pro-activity in the mid game has to be concerning for both. Both teams will face KT Rolster and Gen.G in week two.

Two ADC champions have been ruling the day in the LCS and LEC: Aphelios and Senna. Aphelios has an 89.3% pick/ban rate in the LCS and a 93.3% rate in the LEC. Senna sits at 82.1% in NA and 83.3% in EU. Korea values Aphelios similarly, as he sits at a 100% pick/ban rate 24 games in, but Senna has only appeared in one champion select so far. So who are the LCK teams valuing over Senna?

Aphelios, The Weapon of the Faithful pic.twitter.com/qn7lyP6RYJ

The answer through week one is Miss Fortune. Known as a lane bully, Miss Fortune can attack Aphelios’ weak early laning to give MF’s team early priority in bot lane. Considering dragon stacking is now so important to get to the dragon soul, it makes sense that the LCK is placing an emphasis on having the early push in that lane.

But while she’s showing up in 79.2% of drafts, the results have not been encouraging. Miss Fortune is currently sitting at a 5-12 record for a win rate of only 29.4%. By contrast, Aphelios’ 63.4% win rate is incredibly high for a champion already picked in 22 games.

So even if Miss Fortune is supposed to counter Aphelios, the game results aren’t showing the pick to be worth it so far. Part of it might just be Aphelios being way too strong for any ADC to match, but his record across the LEC and LCS is a lesser 18-15. Senna might not be the answer either, as she is only 16-19 across the two regions.

Despite the prevalence of Aphelios, he garnered only two bans in the first week of the LCK. Given his performance and the lack of an established counter pick, it seems very likely his ban rate will go up in week two.

The revamped Gen.G lineup will get their first test of the season against one of the LCK’s best in DAMWON Gaming. Gen.G will need Kim “Rascal” Kwang-hee to hold up against Nuguri to buy time for Park “Ruler” Jae-hyuk to take advantage of DWG’s bot lane. DWG will need Kim “Canyon” Geon-bu’s synergy with his solo laners to pay off as Kim “Clid” Tae-min gets acclimated to his new teammates.

Two of the LCK’s undefeated will put their perfect records on the line. Kiin has the talent to make top lane one-sided, but Chovy can do the same in mid lane. Lee “Spirit” Da-yoon has an incredible experience advantage over Pyosik, but there’s no doubt the rookie has better mechanics at this point in their careers. Mystic will get to lane against Kim “Deft” Hyuk-kyu for the first time in his return to Korea.