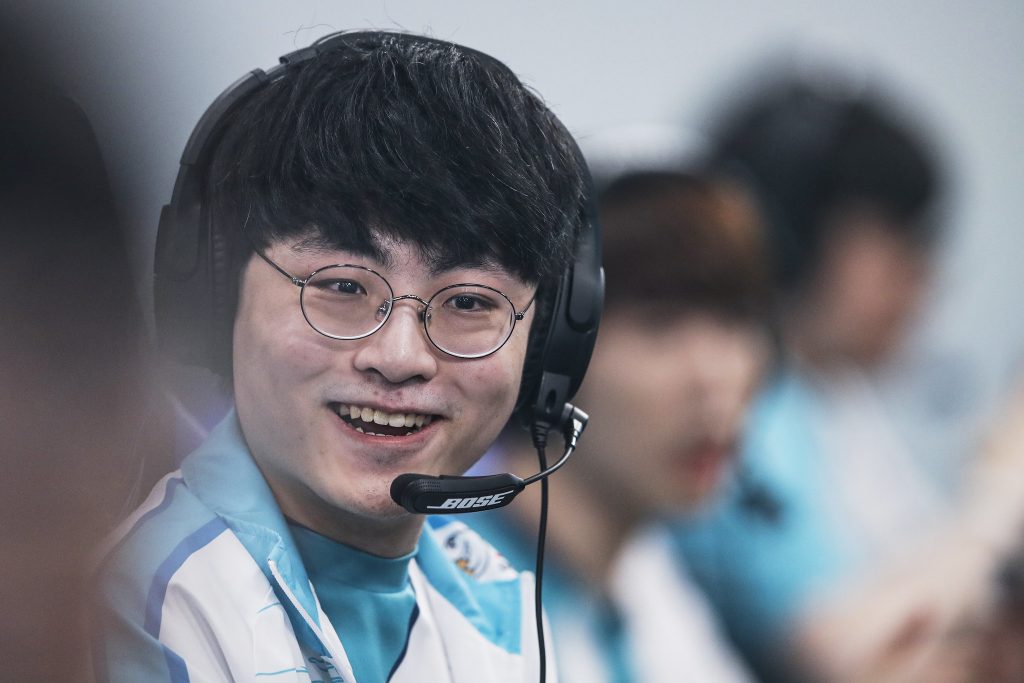 ShowMaker and DWG KIA are still atop our preseason rankings despite losing Nuguri in the offseason. (Photo courtesy Riot Games via Zhang Lintao)

The 2021 League Champions Korea (LCK) Spring Split begins Wednesday, January 13. This will be the first year of franchising in Korea, meaning that teams will be able to break in rookies without fear of being relegated. We’ve already seen that strategy take effect, as several teams are going youth-heavy to start the year. We look at the notable roster changes and where the teams stack up heading into the LCK Spring 2021.

Playing under a new name after their sponsorship deal with KIA, the 2020 World Champions will also be playing with a new lineup. Star top laner Jang “Nuguri” Ha-gwon tested the free agent market, eventually agreeing to join FunPlus Phoenix. DK replaced him with Kim “Khan” Dong-ha, the same man Nuguri will be replacing on FPX. While probably their best option on the market, there is still a reason that FPX went out and grabbed Nuguri after a failed year with Khan. Nuguri is in the middle of his prime, while questions remain if Khan is on the downswing. That said, even a nerfed top lane is enough to keep DK the top team in the LCK.

The rest of the roster remains intact, not to mention the addition of former SK Telecom T1 head coach Kim “kkOma” Jeong-hyeon Khan also allows DK to play the exact same style, which shouldn’t be undervalued.

If we were ranking by deepest overall roster, T1 would definitely overtake DK for the top spot. T1 has two players at jungle, mid, and ADC that would be starting for most LCK teams, as well as another very hyped top lane prospect in Choi “Zeus” Woo-je. T1 retained the majority of the roster that fell short of a Worlds appearance in 2020, but made a critical upgrade at support with Ryu “Keria” Min-seok.

Once new coach Lee “Zefa” Jae-min figures out the optimal starting lineup, T1 will be one of the scariest teams in the league. It just might take time to settle on it. With Lee “Clozer” Ju-hyeon being groomed as the future and Lee “Faker” Sang-hyeok’s contract expiring at the end of the year, this could be Faker’s last run at another championship.

Gen.G kept their entire 2020 roster together, which isn’t a bad thing at all. They finished first in the Spring regular season, second in the Spring playoffs, third in the Summer regular season, and third in the Summer playoffs. Gen.G then had an okay showing at Worlds, advancing past the group stage before getting swept by G2 Esports in the quarterfinals. Gen.G will undoubtedly be one of the top teams in the league, but the bigger question is whether or not they can be the best.

Gwak “Bdd” Bo-seong has shown the form to be the best mid laner in the LCK in any given season, and we know what Park “Ruler” Jae-hyuk can do. It will be up to Kim “Clid” Tae-min to be a more consistent player for Gen.G in 2021. Clid was strong in 2020, but not the MVP level presence Gen.G sought when they signed him away from T1.

Park “Morgan” Gi-tae is coming off a so-so season with Team WE, while support Oh “Vsta” Hyo-seong spent part of last year role swapping to ADC. We aren’t even sure who will be starting at jungle for HLE, as none of their three options have LCK experience. Park “Arthur” Mi-reu (previously known as Mir) comes over from Dire Wolves in OCE, so he may have the inside track. Regardless, there will be inexperience at the typically veteran-heavy roles of jungle and support.

Every year, Afreeca Freecs tries to retool their roster around top laner Kim “Kiin” Gi-in to build a contender. This year they’ve done so by overhauling the bot lane. Nam “Ben” Dong-hyun retired and Jin “Mystic” Seong-jun moved back to the LPL, leading to AF signing Bae “Bang” Jun-sik and Son “Lehends” Si-woo.

While Lehends is obviously a great pickup, Bang should be seen as a downgrade from Mystic. Considering that Song “Fly” Yong-jun and Lee “Dread” Jin-hyeok look to remain starters on the top side, it’s hard to see AF challenge the top four of the league. Instead, they fall more on the line of gatekeepers between the upper and lower tiers of the LCK.

Previously known as SANDBOX Gaming, Liiv SANDBOX return with the majority of their roster intact. That wouldn’t be a great thing if you were referencing the Spring team that nearly got relegated, but the Summer version coached by Jakob “YamatoCannon” Mebdi went a respectable 7-11 in the regular season.

The big change is the addition of former T1 support Lee “Effort” Sang-ho, who replaces the retired Kang “Gorilla: Beom-hyun. Effort is coming off a tough year, but he’s still the same player who pushed the legend Cho “Mata” Se-hyeong into retirement after the 2019 season. LS may not be a title challenger, but their experience keeps them in the middle-of-the-pack.

Previously known as Team Dynamics, NS RedForce made a few roster changes after going 5-13 in their first split in the LCK. Jungler Han “Peanut” Wang-ho is the headline addition, re-joining the LCK after spending last year with LGD Gaming.

In addition to Peanut, NS signed mid laner Park “Bay” Jun-byeong and support Kim “Kellin” Hyeong-gyu. Bay was a former trainee with Griffin, while Kellin was relegated to the bench behind Kim “Life” Jeong-min on Gen.G. There may be some optimism for NS finishing second in the KeSPa Cup, but that hasn’t always translated to success — just ask Afreeca Freecs last year.

Now we’re getting into the very unknown rosters in the LCK. After fielding a world-class roster in 2020, DRX are pretty much building from scratch in 2021. Jungler Hong “Pyosik” Chang-hyeon remains for his sophomore season, but the rest of the starting lineup will be entirely new. Mid laner Song “SOLKA” Su-hyeong, ADC Jeong “BAO” Hyeon-woo, and support Son “Becca” Min-woo have all been promoted from the academy team, leaving top laner Hwang “Kingen” Seong-hoon as the only other player on the team with LCK experience.

DRX had success in promoting Keria and Pyosik last year, but these rookies do not have established stars around them.

KT Rolster have a mix of established veterans and players looking to earn their debuts in the LCK. Son “Ucal” Woo-hyeon returns as the presumed starting mid laner, but KT have added Kim “Dove” Jae-yeon as well. Most interestingly, former SK Telecom T1 jungler Kang “Blank” Sun-gu has returned to the LCK after spending the past two years playing in Japan.

KT have more recognizable names in Choi “Doran” Hyeon-joon and Lee “HyBriiD” Woo-jin, but nobody stands out as a star player on the team. With franchising securely in place, it wouldn’t be surprising to see KT mix in the young players early and often.

Fredit BRION, formerly known as hyFresh Blade or Brion Blade, are the only newcomers to the LCK. They very, fortunately, enter at the time of franchising, as their roster appears to be one of the weakest ones in the league.

Junglers “Lee “Chieftain” Jae-yub and Eom “UmTi” Seong-hyeon have experience in the LPL and LCK, but neither could ever seize an opportunity to become a permanent starter. The same can be said for Kim “Lava” Tae-hoon, who appeared in only 33 of HLE’s 105 games in 2020. Meanwhile, top laner Yoon “Hoya” Yong-ho has only eight games of LCK experience, and the bot lane duo are both rookies. It could be a rough debut for FB in the LCK.