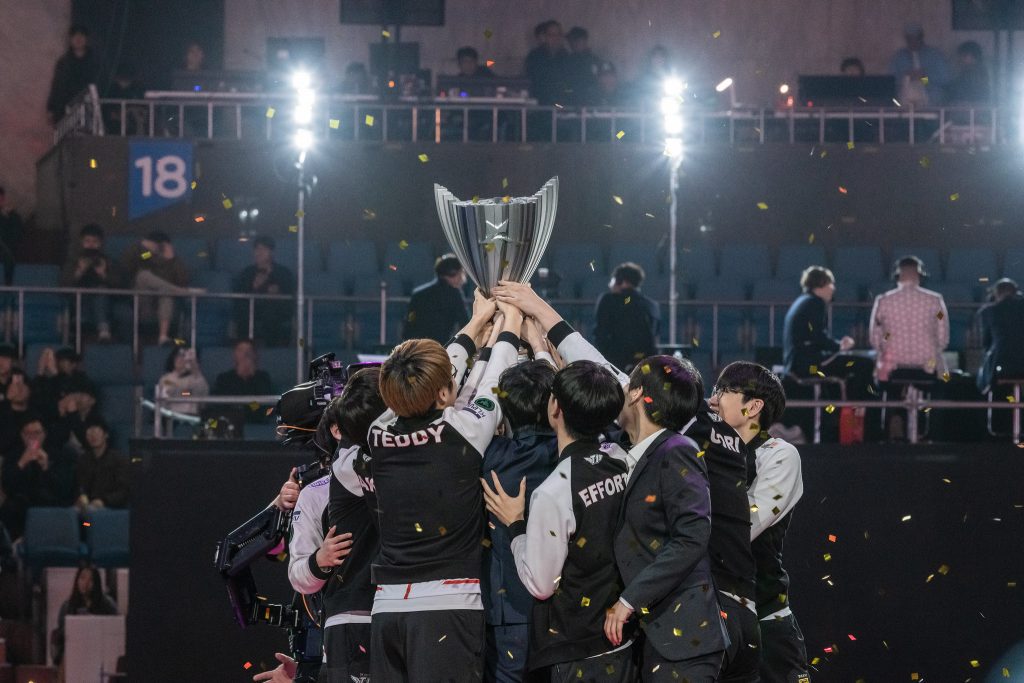 SK Telecom T1 swept Griffin 3-0 to win the 2019 LCK Spring Split Finals in Jamsil Indoor Stadium. The SKT championship comes after an off-season in which they revamped the entire starting lineup around Lee “Faker” Sang-hyeok to give him more support. This championship validates those moves and put on display just how scary SKT can be when you surround Faker with superstar talent.

Game one started with a curveball by Griffin in champ select. Their first rotation picks Taliyah and Pantheon ended up being their bot lane duo. Park “Viper” Do-hyeon played Taliyah as the carry, while Son “Lehends” Si-woo played Pantheon as the support. The way it works is that Pantheon starts Relic Shield and takes every minion he can until Taliyah’s Frostfang transforms, at which point she takes over farming duty.

Griffin couldn’t have scripted a better start to the series. The team grouped as five to invade SKT at level one and were rewarded with First Blood. Cho “Mata” Se-hyeong’s Braum was caught out in the bot lane pixel brush by Choi “Sword” Sung-won’s Sylas chains and chain crowd controlled by Lehends’ Pantheon. Viper was the beneficiary of the early kill and gold.

The teams traded infernal drakes in the first 15 minutes, a great relief for SKT given their scaling. Griffin were late as SKT rushed their infernal take at 14 minutes, conceding the objective despite being stronger early. Lee “Tarzan” Seung-yong’s Olaf stole the third infernal spawn from SKT at 19:30, but the scaling difference between a 3-0 infernal lead versus 2-1 infernal lead is massive.

Griffin pushed their early lead as high as 3K gold, but never enough to keep SKT and their scaling out of it. It took until 35 minutes, but SKT finally found their team fight. They controlled vision around the Baron pit, prompting Griffin to use Taliyah’s ultimate to try to catch out Faker’s Ryze. Mata’s Braum disengaged Griffin with an excellent Glacial Fissure while Kim “Khan” Dong-ha’s Hecarim teleported in behind.

Lehends’ squishy Pantheon build meant he dropped quickly, giving SKT a quick numbers advantage. They pressed forward with Hecarim’s Onslaught of Shadows, picking off Viper and Sword for a 3-0 fight. SKT took Baron uncontested, giving them their first gold lead of the game.

Lehends’ Pantheon made a miraculous Elder Drake steal at 38 minutes, but even that was not enough for Griffin to turn it around. He died instantly afterwards, as did Sword’s Sylas, and SKT routed the fight 4-1 and pushed for the win. Park “Teddy” Jin-seong’s Ezreal was named game one MVP after finishing 2/0/5 and dealing a game high 24.6k damage in SKT’s 11 kills to 6 win.

Game two started with another level one invade from Griffin, but this time SKT were prepared. Mata’s Galio hit a double taunt and SKT picked up kills on Tarzan’s Olaf and Jeong “Chovy” Ji-hoon’s Lissandra. Khan’s Akali had to use his teleport to get to top lane in time as the minions crashed, but getting First Blood was a worthwhile trade.

SKT led game two from start to finish. Tarzan stole Rift Herald away from Kim “Clid” Tae-min’s Jarvan IV for his second smite steal in the series, but SKT still came out on top with a 3-for-1 kill trade in the ensuing fight. A double kill for Faker’s Azir by the drake pit at 14 minutes put SKT up eight kills to two with a near 3K gold lead.

A final fight at 29 minutes sealed the deal for SKT. Mata hit a flash three-man taunt to start the fight, Faker killed Chovy after his invulnerability wore off, and Khan made sure that Viper and Griffin’s back line couldn’t deal any damage. SKT pushed to end immediately following the fight. Clid’s Jarvan IV was named MVP of game two, finishing 5/0/6 for participation in 11 of SKT’s 16 kills.

Griffin went back to Taliyah and Pantheon in game three, while Khan pulled out his signature Riven pick into Sword’s Aatrox. Clid’s Jarvan IV gave SKT’s bot lane room to breathe by flash ganking at level one to hand Teddy’s Ezreal First Blood on Viper’s Taliyah. While Ezreal is okay playing from behind, the Taliyah and Pantheon duo absolutely cannot afford to get behind in lane.

The early laning phase didn’t go much better for Khan. Sword comfortably solo killed him at 12 minutes, calling into question the wisdom of the last pick Riven. But Khan didn’t let that setback deter him in the slightest.

Griffin sent three to gank Faker’s Ruze mid lane at 16:30, only to realize that was a mistake. Faker side-stepped skill shots and SKT turned the fight back around. Khan popped his ultimate and flashed into three, stunning them and bursting down Lehends’ Pantheon and Chovy’s Sylas instantly. Sword teleported in late to his own demise, feeding another kill over to SKT to give them a 5-2 kill lead.

Khan went on to get a triple kill at the 23-minute dragon fight to give SKT a 14-8 kill lead and a free Baron. Griffin managed to stall that buff out without more damage done, but SKT found their series winning fight minutes later.

Lehends dropped on top of Mata in Griffin’s jungle to try to find a pick. Mata died, but he bought just enough time for the rest of his team to arrive. Teddy picked up two kills, while Faker, Clid, and Khan picked up one apiece for the 5-for-1 ace. SKT ended the series on a push straight after, winning game 3 up 19-9 in kills and 10K gold.

Teddy was again named MVP in game three after finishing 8/1/3, giving him a combined 11/1/14 K/D/A for the series. He was then named Finals series MVP for his efforts on Ezreal and Lucian, proving that SKT doesn’t always need to revolve around Faker.

This is SK Telecom T1’s seventh domestic championship since their inception in December 2012. All five have featured Faker, widely considered to be the greatest player in League of Legends history. Griffin once again settled for second place in their second split in the LCK.

SK Telecom T1 have now qualified for the Mid-Season Invitational as Korea’s lone representative. They will be one of, if not the favorite at the international competition.