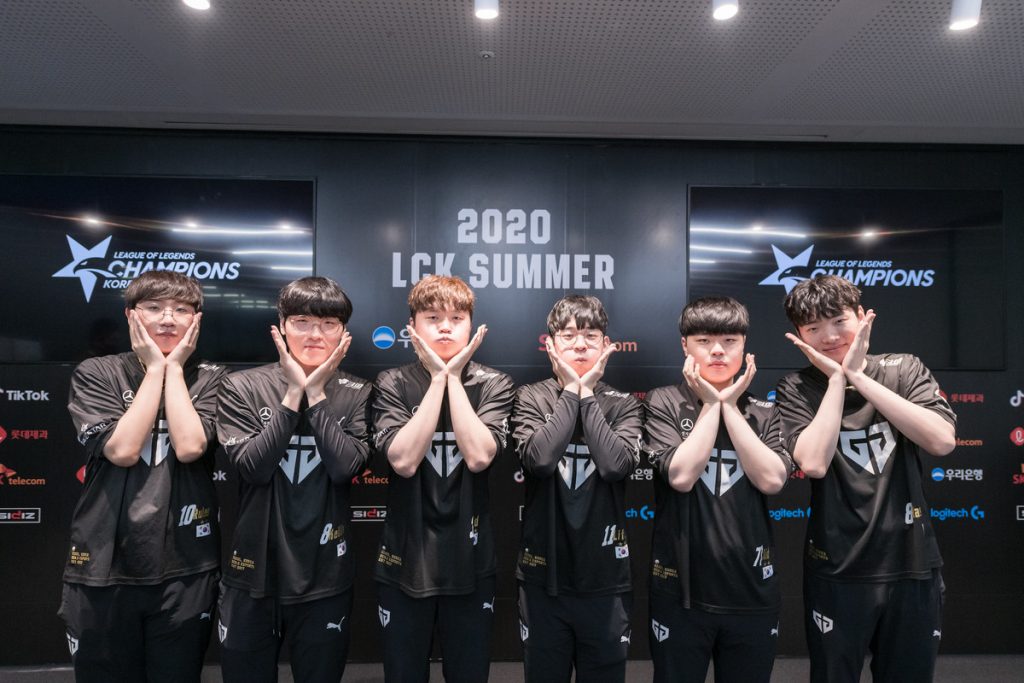 With the League of Legends Champions Korea (LCK) Summer playoffs complete, Korea had one final berth to the 2020 World Championship available in the Regional Finals. That spot was seized by gauntlet gods Gen.G, who swept Spring champions T1 in the final match. T1, Afreeca Freecs, and KT Rolster have all seen their competitive year come to an end.

For a long stretch in 2020, there was a question as to whether Gen.G could beat T1. After winning both of their 2020 Spring regular season matchups, T1 smoked Gen.G 3-0 in a sweep to win the Spring Finals. This was despite Gen.G swiping star jungler Kim “Clid” Tae-min from T1 in the off-season. With those results in mind, it wasn’t a surprise that T1 continued their dominance over Gen.G to begin Summer, beating them 2-0 in week three.

Though the two teams met only two weeks later, Gen.G caught T1 at the right time. T1 were coming off surprise losses to Team Dynamics and KT Rolster, allowing Gen.G to take advantage. They beat T1 2-0, snapping their loss streak and, maybe, giving Gen.G the confidence they would need to take down T1 in the playoffs. As Gwak “Bdd” Bo-seong told Ashley Kang after the match: “Through today’s victory, we might have a better showing [against T1] in the future, too.” Gen.G wouldn’t get an opportunity to play T1 in the playoffs, but they took full advantage in the Regional Finals.

They kicked off the series with a 19 kill to 11 win in 33 minutes in game one. Kim “Rascal” Kwang-hee’s Volibear controlled the top lane matchup against Kim “Canna” Chang-dong’s Renekton, controlling the tone early. Bdd’s Azir (5/2/11) and Park “Ruler” Jae-hyuk’s Senna (6/2/10) led the way in kills.

T1 controlled the early game in game two, but an unfortunate teleport by Lee “Faker” Sang-hyeok gave Gen.G a chance to turn it around. Gen.G picked him off, Ruler’s Ezreal got a quadrakill, and Gen.G secured the clean five-for-zero ace and Baron. With that sequence, Gen.G turned a 4k gold deficit to a 2k gold lead. One more team fight win gave them the victory, winning 19 kills to 13 in 32 minutes.

Already ahead 2-0, Gen.G wasted no time closing the series out. Rascal’s Volibear dominated Canna’s Renekton again, Clid’s 0/0/8 Nidalee controlled the pace against his former team, and Gen.G won 13 kills to 9 in only 28 minutes.

Gen.G’s victory continued their dominance in the Regional Finals. They have now won four out of the last five LCK gauntlets, failing only to win in 2019 when they did not qualify for the tournament.

Gen.G will enter the World Championship as the LCK’s third seed. Unlike North America, Korea’s third seed does not have to participate in the Play-In stage, so Gen.G have qualified directly into the Main Event.

Though they enter Pool 3 will be matched up against first and second seeds from other regions, Gen.G will be a force to be reckoned with in the group stage. They feature an all-star lineup that plays a very solid game without many holes. Though obviously not as explosive as DAMWON Gaming, they have the same steady play that should translate well to a hectic group schedule. They will be aiming to tie T1 as the second organization to win their third World Championship. Fnatic are the only other 2020 participants to have previously won a World title.

We knew that T1 would have a lineup decision to make heading into the Regional Finals. Lee “Clozer” Ju-hyeon started 14 of T1’s final 15 regular season games before getting the start in game one of the playoffs. When T1 lost game one, Faker was subbed in for games two and three. T1 subsequently lost the round one playoff series to Afreeca Freecs, so it was anyone’s guess as to which mid laner T1 would choose for the gauntlet.

As it turns out, that was far from the biggest lineup drama for T1. Faker ultimately got the start, but he was flanked by two new faces. Choi “Ellim” El-lim replaced Moon “Cuzz” Woo-chan in the jungle, while Lee “Gumayusi” Min-hyeong replaced Park “Teddy” Jin-seong.

Ellim played nine regular season games for T1 in the Spring before playing seven more in the Summer, but his last action in the LCK came in a week four loss to Team Dynamics. Cuzz also performed well enough to earn an All-LCK Third Team spot, so even with a rougher Summer Split, he was still rated highly among his peers.

Gumayusi, however, was making his LCK debut in the Regional Finals. There had been many rumors that other teams were trying to acquire Gumayusi, but T1 held onto him to try to move toward a more aggressive play style with the team. It was only a year ago that Teddy was considered one of the best, if not the best ADC in the world, but T1 wanted a more active laner in their bid for Worlds.

The early results were positive, as T1 beat Afreeca Freecs 3-1 in the first round of the gauntlet. Realistically they should have won 3-0, but the result was good enough. Gumayusi looked great mechanically, lending credence to the idea that T1 could bench a player as good as Teddy without suffering a drop off in play.

We gave it our best, though our road to Worlds came to an end. 2020 had its ups and downs but we'll come back as we always do. Thank you for being with us for every step we made.#T1WIN #T1Fighting pic.twitter.com/u95MKPxHoE

However, the series against Gen.G revealed the same flaws that plagued T1 throughout Summer. T1 were the lesser coordinated team throughout, often getting picked off to allow Gen.G to secure an objective. Lee “Effort” Sang-ho was a frequent victim and didn’t look to be on the same page as Ellim. It was not isolated, however, as both Faker and Gumayusi had their moments as well. T1 also could not be bailed out by Canna, who had one of his worst matches of the year. He twice blind picked Renekton to lose lane against Volibear, and his Jayce into Renekton was targeted by ganks.

With the loss, T1 will join Cloud9 as teams to win their Spring Split but miss out on Worlds. While all of their 10-man roster remain under contract through at least 2021, expect there to be some movement this off-season. Teddy and Cuzz can’t be happy to have been benched in the final stretch of the season, and it’s hard to hold onto so many talented substitutes.

T1 could also explore a new support, as Effort struggled mightily down the stretch. The fact that T1 called up players for Cuzz and Teddy but not Effort may be a negative sign for Choi “Kuri” Won-yeong’s development. Clozer is clearly being groomed as Faker’s replacement when he retires, so he will surely stay put. But too many talented players riding the bench could cause more discontent and play style clashes on the team. Whatever they choose to do, T1 need a new identity in 2021.

Like T1, KT Rolster and Afreeca Freecs also saw their year come to an end in the Regional Finals. KT Rolster dropped their series against AF 3-0, while AF fell 3-1 to T1.

KT Rolster had a good thing going at the end of the Spring Split, but they lost their momentum in the Summer. Signing Song “Smeb” Kyung-ho and Son “Ucal” Woo-hyeon upgraded their depth in their solo lanes, but KT could never figure out their starting lineup. After spending all Summer trying to find the right combination, KT continued to mix and match against AF. Smeb and Ucal started games one and three, while Kim “SoHwan” Jun-yeong and Lee “Kuro” Seo-haeng started game two.

Ucal and Smeb are signed through 2021, so it seems likely that SoHwan and Kuro will be the solo laners to move on. Starting jungler Kim “bonO”, ADC Kim “Aiming” Ha-ram, and support Park “TusiN” Jong-ik all see their contracts expire at the end of this year. KT Rolster could undergo another major overhaul this off-season.

We lost today's game and our 2020 Summer split is over today. Although the journey to the Worlds has ended today, please show warm encourgement to our players.

As always, thank you for your support to Afreeca Freecs, and we'll be back after a short break. Thank you.

Afreeca Freecs got the best of KT Rolster, but they also had roster question marks of their own. Song “Fly” Yong-jun earned Summer play time over Kim “ALL IN” Tae-yang after splitting time to end Spring, but AF could still look to bring in more competition at that role. It was nice that Fly was willing to flex top to allow Kim “Kiin” Gi-in to play carries like Lucian mid, but it’s not very useful if Fly loses that lane harder than Kiin can win mid.

Jungler Lee “Spirit” Da-yoon, ADC Jin “Mystic” Seong-jun, and support Nam “Ben” Dong-hyun will be free agents at the end of this year. Spirit continued to split time with Lee “Dread” Jin-hyeok, who also expires at the end of 2020. The team will continue to be built around Kiin, who remains signed through 2022.