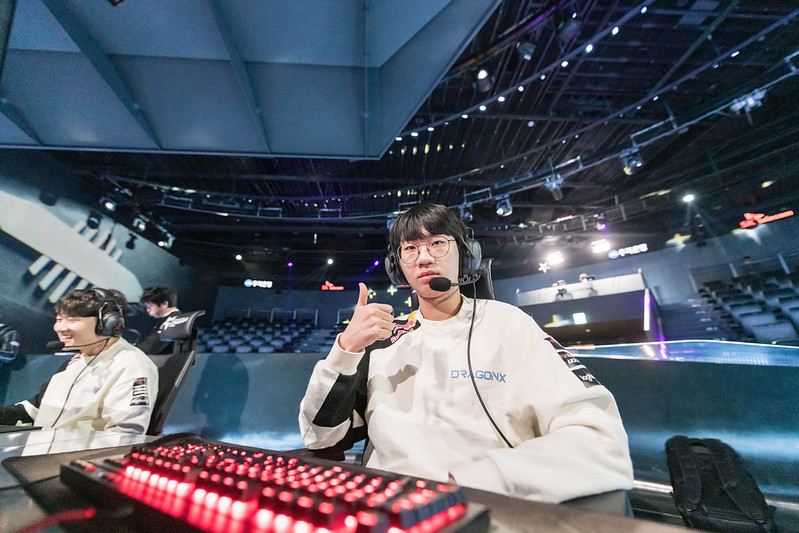 DragonX are moving on to face T1 in the semifinals after a 3-2 win over DAMWON Gaming. (Photo courtesy Riot Games - LCK)

We’re halfway through the 2020 League of Legends Champions Korea (LCK) Spring Split playoffs. DAMWON Gaming defeated KT Rolster 2-1 to set up a date with DragonX in round 2.

DragonX came out on top of a hard fought 3-2 series to move on to the semifinals. There they will play against T1 in a best-of-five series for a shot at Gen.G in the finals. DAMWON Gaming will join KT Rolster in waiting for the Summer Split to resume on Wednesday, May 20th.

ROUND 1: DAMWON GAMING VS. KT ROLSTER

KT Rolster drafted an interesting mix of dive and peel in game one. Aatrox and Elise want to go into DWG, but Zilean, Aphelios, and Tahm Kench play better into dive from DWG. On the other side, DWG had a great diving duo in Camille and Kassadin. They showed their ability to flex Syndra by shifting her to Ghost in the last rotation.

With KT unable to make early plays with Elise, DWG got free scaling onto their important mages. Camille and Kassadin were able to split KT to death, picking up inhibitors despite KT picking up kills. DWG eventually cracked KT, picking up a five kill for zero ace to end the game up 10 kills to 7 in 39 minutes. Nuguri’s 2/1/4 Camille was named player of the game for his split push pressure.

DWG built an early 3.6k gold lead at 14 minutes, but KT shut the door after that. They picked up 14 of the next 15 kills off the back of their team fight strength to fight their way back into the series. Kim “Aiming” Ha-ram’s Lethality Varus finished 8/1/7 and dealt a whopping 44.3k damage — almost tripling the next highest (16.7k) in the game — to be named player of the game.

Range was the name of the game for DWG in game three. They picked three of the highest ranged champions in their roles in Jayce, Corki, and Kog’Maw as their three carries. KT committed to a diving composition with Aatrox, Sejuani, Leblanc, Kalista, and Taric all fitting together with the same theme.

DWG took a victory at Wild Card match! We will continue to take the titles. pic.twitter.com/jCz5NURJtq

DWG built a 3.6k gold lead before losing a fight four kills to zero to put KT ahead in gold. However, DWG managed to pick off Lee “Kuro” Seo-haeng’s Leblanc to secure Infernal Soul at 35 minutes. With that buff on DWG’s carries, they shredded through KT at a Baron fight at 38 minutes. With that ace, DWG were able to close out the game and series with an 11 kill to 8 victory in 39 minutes.

ROUND 2: DRAGONX VS. DAMWON GAMING

DragonX kicked off their series by first picking Varus for Kim “Deft” Hyuk-kyu. DAMWON Gaming responded with Sett, but he was eventually flexed to jungle for Kim “Canyon” Geon-bu. DWG built an excellent poke composition with Zoe, Ezreal, and Yuumi. They also got to last pick Gangplank for Jang “Nurguri” Ha-gwon into Choi “Doran” Hyeon-joon’s Ornn.

With such a lead, DRX were able to stack dragons and force fights at will. Because DWG were so far behind in items, their poke didn’t stick onto DRX or dissuade them from fights. DRX took Baron, took Cloud Soul, and finished off DWG in 31 minutes. They were up 14 kills to one as the Nexus fell. Deft was named player of the game after dealing a game-high 29.7k damage on Lethality Varus.

The two teams drafted very similarly in game two. DRX kept their priority on Varus for Deft. Pyosik and Jeong “Chovy” Ji-hoon also reprised their roles on Sejuani and Leblanc. DWG went for a lot of poke with Zoe and Ezreal again, though they flexed Sett to support this time instead of jungle. Nuguri once again got final counter pick, this time opting for Sylas into Kennen.

Disaster struck for DWG at seven minutes. They had picked up First Blood top and looked like they would secure the first Ocean drake, but Deft walked up the river just in time to kill Canyon and steal away the objective. BeryL’s Sett also died for the play, forcing DWG to play from behind with a poke composition again.

Chovy’s Leblanc took full advantage. Without great lockdown on DWG, he was unlocked to find pick after pick. Chovy finished 9/0/4 in 32 minutes to earn player of the game and put DWG on match point. Deft’s Lethality Varus once again led all players in damage dealt (27.9k).

DWG continued on red side, but they saw enough of Deft’s Varus in games one and two to ban it out in game three. DRX instead first picked Aphelios, again leaving Sett for DWG. DWG continued to pick Zoe and Ezreal, while DRX went straight back to Sejuani and Leblanc. BeryL added to DWG’s poke by last picking Bard.

DRX focused on shutting down Nuguri’s Sett early. Pyosik visited top twice in the first eight minutes, picking up kills on Nuguri both times. But with his favorable lane matchup, Nuguri was able to stay even in CS and DWG did not fall behind in gold this game. DRX’s largest gold lead was 600 at 10 minutes, but DWG were up two turrets and 1.7k gold by 15 minutes.

Game three came down to a Baron fight at 35 minutes. DWG started it and Canyon smote it down before DRX got in range. DWG picked up four kills afterwards, allowing them to push into DRX’s base. Deft took out BeryL before falling, securing the win for DWG. Kills were tied at 12 apiece as DWG destroyed the Nexus at 36 minutes.

DRX went right back to first picking Varus when DWG left it open to begin game four. DWG decided to commit to their poke composition even harder than the previous games by locking in Jayce in their first rotation with Zoe. They were supplemented by Rek’Sai, Ezreal, and Bard. DRX once again went with a more team fight oriented composition with Ornn, Sejuani, and Morgana.

DWG led by as much as 3.2k in the mid game before DRX brought it back at 25 minutes. Canyon’s Rek’Sai got picked in DRX’s jungle, Deft locked down ShowMaker’s Zoe, and DRX took Baron to put themselves in the gold lead at 26 minutes.

Fortunately for DWG, Nuguri’s Jayce was so strong in the side lane that they could split apart DRX. Nuguri’s pressure allowed DWG to pick up an uncontested Cloud Soul at 40 minutes. Nuguri then solo killed Doran’s Ornn bot while the rest of the players fought in a 4v4 mid. DWG won that fight two kills for one, Jang “Ghost” Yong-jun’s Ezreal teleported to join Nuguri in DRX’s base, and DWG won while down 11 kills to 12 in 41 minutes.

With the series on match point, DWG made an interesting decision to pick Sejuani over Zoe in their first rotation with Jayce. DRX then took Zoe, leaving ShowMaker Azir. DWG pivoted entirely away from the poke composition they had played the previous four games, picking Miss Fortune and Taric bot lane. Both team compositions had a mix of champions that want to dive and others that want to poke.

DWG thought they would pick up an easy First Blood on Deft at nine minutes. Nuguri’s Jayce teleported behind, turning it into a 1v2 situation for Deft. That was no problem for Deft, who turned on Ghost to kill him 1v1 while still getting away from Nuguri’s Jayce. DRX led throughout the early to mid game, leading to a 5.4k gold lead by 24 minutes.

We only have 2 more matches to go. Although we won, we still have a lot to learn. Thank you to all the fans who have cheered for us till the end. We will prepare hard and come back with a better performance.#GODRX #EnjoyChallenge

There would be no miracle comeback for DWG, as DRX took Baron at 29 minutes and made quick work of the rest of DWG’s base. They ended the series with a 17 kill to 5 win in 30 minutes. Both Doran’s Irelia (5/0/11) and Deft’s Aphelios (5/0/10) went deathless in the final game.