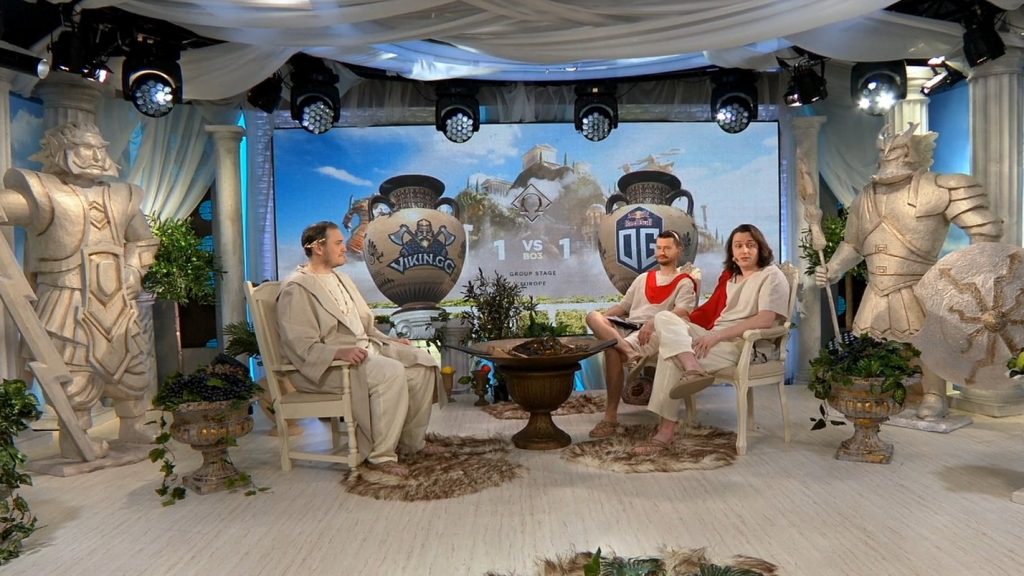 The OMEGA League has proven that online tournaments, when run properly, can really deliver a unique and unforgettable viewing experience (Photo via Team Secret)

WePlay! have gone from a fringe CIS tournament organizer to Dota 2’s greatest hope for the future. But what exactly makes WePlay! so unique? We spoke to four of the talented cast from the most recent WePlay! event about their experience, and asked their thoughts on why exactly the OMEGA League was such a success.

Amidst a global pandemic, the future of certain esports titles has been put at risk. While some tournament organizers and developers were quick to adapt, Dota 2 was crippled. With a waning pool of TOs interested in the title and Valve’s Dota Pro Circuit postponed, the future looked grim.

In March 2020 as the nations began to close borders, WePlay! organized its WeSave! Charity Play event, a $120,000 online event with all prize money going towards vaccine research and non-profit charity work. While some were skeptical that it was nothing more than a well-timed PR move, the announcement of the $250,000 WePlay! Pushka League a month later was proof WePlay! meant business.

On July 17, WePlay! revealed the new $590,000 OMEGA League would be a joint business venture between themselves, Epic Esports Events and leading European teams such as Team Liquid, Team Secret, OG and Virtus.Pro. With Valve’s Dota Pro Circuit delayed, the coalition of organizations were to create a sustainable ecosystem of their own.

The theme of the OML was Greek Gods, and WePlay went all out. Towering white statues of Dota 2 heroes stood on either side of the panel, vines ascended the walls and Mount Olympus was the backdrop.

“In the aftermath of Dota 2’s ‘Me Too’ movement, the lack of any International due to COVID-19, and just the general nightmare that is 2020, I think seeing a bunch of goofballs wearing togas screaming about Tier 1 and 2 Dota was pretty much what everyone needed,” joked content creator Jake “SirActionSlacks” Kanner.

With the world in chaos, OML was a soothing escape for thousands of Dota 2 fans. “I’ve always been a firm believer that it’s our job to give people a little escape from their lives,” said Slacks. “The oddball cast and set design did that very well! I think people needed a break and they got it.”

Part of what made the event such a success was the high spirits of the “oddball cast” on-screen, and that was no coincidence. Unlike typical offline events where the intensive match schedule could lead to fatigue or burnout, the OML operated a simple schedule of three matches per day. With four hosts and a 10-person strong pack of analysts and casters, there was plenty of time for a rest, leading to a far more vibrant and energetic broadcast.

“WePlay! did a great job at providing us with everything we needed while staying in Ukraine for over a month,” said analyst Dominik “Lacoste” Stipić. “We had a cozy apartment in a nice area with a PC and great internet connection. We could order whatever food we wanted and any kind of wish was fulfilled.”

“WePlay! just always goes above and beyond to ensure talents have a great time at their events. Apartments for all talent instead of hotels. Especially during a pandemic, it’s nice to have your own place you can call ‘home’,” said analyst Robson “TeaGuvnor” Merritt, who was one of the fresher faces on the panel. “Everyone having COVID checks before starting the event on/off camera ensured we had our own bubble. Makes you feel comfortable while working in these uncertain times.”

“I don’t think anyone can make a talent feel safe about their future,” said analyst Lizzard. “But it did comfort us during this trying COVID times like a warm blanket on a cold night. Hopefully, the OML felt as cozy for everyone watching from home.”

“There isn’t a different squad of people I would’ve rather worked with and that made this event special for everyone, the greenroom vibe is just passed over on the scene,” said Lizzard. “30-plus days of work felt like any normal 5-7 day event from the past, even with my long-ass 40-minute commutes from the opposite part of Kyiv.”

Aside from a more-than-comfortable setting for talent, the OMEGA League was also well designed for the EU teams, the benefit of them being heavily involved in its formation. Although the OML did organize one Asian and two Americas divisions, the EU region had the bulk of the prize money and the attention.

“The Quality of Dota at OML was top notch. I think this tournament showed to everyone that you can feel the same excitement from home,” said Lacoste.

The focus of their attention on Europe meant for a high-quality product, especially with the $50K Divine Division leading nicely into the best-of-the-best $500K finale. Many tournament organizers might get carried away and aim for world domination next time around, but even for Season Two – which starts on October 28 – the OML will once again focus primarily on Europe.

An interesting aspect of the OML was the Europe Divine Division, which included 16 “tier 2” teams from the closed qualifiers. The usual suspects included Na’Vi and Ninjas in Pyjamas, as well as a whole host of other EU and CIS teams who got a chance to impress on the international stage.

“I honestly loved casting and following tier 2 teams the most,” said SirActionSlacks. “I thrive off annoying people and it had been a long time since people got genuinely annoyed with something I was doing.”

SirActionSlacks and co-caster Austin “Capitalist” Walsh’s broadcast style for the tier 2 teams came under scrutiny mid-event after a coach of a participating team accused them of being too critical of the players’ performances according to SirActionSlacks.

“I remember the discussion about commentating T2 Dota but for me, it’s just about finding ways to keep people engaged with the stream if the quality of Dota is lower than T1,” said TeaGuvnor when asked what the reaction was to the drama.

“If you just do a bedroom cast and treat it like TI Finals people will get bored as it isn’t Secret, OG, Nigma etc. So adding the humor while still keeping serious analysis or play-by-play for critical moments gives a refreshing new take on the quality of Dota being watched. The viewer numbers also reflected this. It worked. Slacks is a gem,” said TeaGuvnor.

The short-lived tier 2 cast drama was just one of several that took place over the course of the month, but the OML hype train just kept going. Overall the criticism was simply taken on the chin and the show went on. “After we read the Cap/Slacks ‘drama’ we decided to cast one game full try-hard mode and then went back to the same old,” joked Lacoste.

Probably the most compelling aspect of the OMEGA League besides the top quality Dota was the side-content and antics of the talent. WePlay!’s interludes on panel and pre-produced content pieces did not feel forced and the wide variety meant it set the tone for the unexpected. Whether it was Sheever roleplaying Axe, Slacks’ AYAYAYA dance or ODPixel’s Techies rap, viewers were engaged with the expertly produced content.

“If you have the stupidest possible idea regarding the show you can tell it to production and they will consider it,” said Lacoste. “During one of the casts I started talking about dolphins to keep our viewers entertained and production was posting daily dolphin facts and on the last day Danko the Dolphin made the appearance.”

“Everyone has their moments of being great and just the overall chemistry this group of talent has is always fun to be around,” said Tea Guvnor.

What the Future Holds for OMEGA League

Many of us felt that Dota 2 was done for when TI10 and the DPC were postponed, but the OMEGA League has proven that online tournaments, when run properly, can really deliver a unique and unforgettable viewing experience. They also did the impossible, they made a closing ceremony actually worth watching.