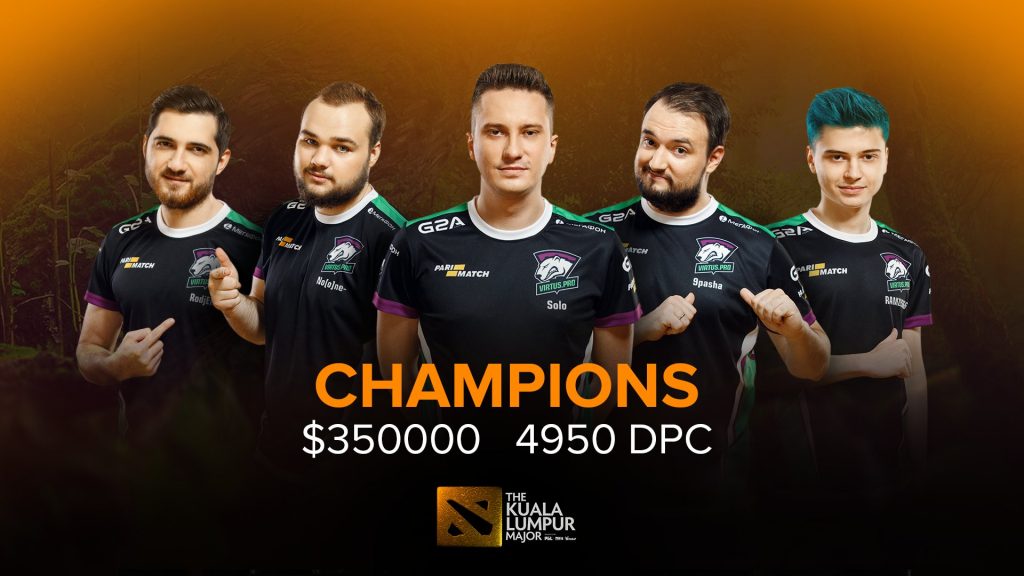 Team Secret and Virtus.pro battled it out in a best-of-five Grand Finals in Kuala Lumpur, but ultimately it was VP that took the first major of the year.

The first official Major of the DPC 2018/2019 and PGL’s sixth hosted Major event concluded in an epic showdown between the series leader Team Secret and the defiant Virtus.pro on Sunday. The two teams battled it out in a best-of-five Grand Finals in Kuala Lumpur, Malaysia for the chance to claim the first place prize and first place on the DPC leaderboard.

Team Secret were the series favourites as they hadn’t dropped a match until the Grand Finals against Virtus.pro. Their strategy was unmatched and their unpredictability had their opponents struggling to out-ban or counter-pick Secret’s ‘secret’ drafting strategy. Virtus.pro’s play style saw countless teams fall to their heavy-hitting and un-relentless gameplay. The Grand Finals did not disappoint fans of the game as these two Dota 2 goliaths took the series to five games. VP fought with vigor by frequently choosing hard-hitting picks like Tiny and Terrorblade. Team Secret favoured damage-dealing heroes like Monkey King and Phantom Lancer but couldn’t quite make the plays they needed to win Game 5. While there was a lot of on the line for both teams, the seriousness of the series was broken by a game of chicken Rodjer and yapzor played. Seeing those two players joke around helped remind everyone that this was a game they were playing.

In the end, Virtus.pro emerged victorious and they won their 5th Major title, beating OG’s previous record of three Major victories. Serious fans of either VP or Secret should also note that the series between Virtus.pro and Team Secret is now tied at 33-33. These two teams now lead the DPC rankings with Virtus.pro securing 4,950 DPC points and $350,000USD and Team Secret earning $170,000USD and 3,000 DPC points.

The third place winners, Evil Geniuses dropped to the Lower Bracket in round one of the Upper Bracket after a crushing defeat from ppd’s new team Ninjas in Pyjamas (NiP). The previous CEO of EG seemed to understand EG’s drafting style and was always one step ahead. The loss sent EG to the lower bracket where they valiantly fought their way through to five rounds of the Lower Bracket only to face NiP once again. EG stuck to drafting one of Arteezy’s best heroes Terrorblade every game and pulled out a series win against the very team that had sent them to the LB. It was a sweet victory for EG who would move onto the Lower Bracket Finals and it was a comfortable fourth place win for NiP who walked away with $80,000USD and 1,350 DPC Points. EG was ultimately defeated by the would-be champions Virtus.pro whose fast-paced in-game play-style was too much for the NA team to handle. EG earned $100,000USD and 2,100 DPC Points from their efforts at the Major. Not to mention Arteezy’s third-place curse remains

Aside from the fantastic Dota 2, there were a couple of community issues that arose at the Major. Aside of the fans complaining about a lack of enough food trucks and the not as merchandise as other events, one of the biggest complaints to come from the Kuala Lumpur Major didn’t have anything to do with the actual event – it was an issue of plagiarism. A local artist noticed that one of his pieces was being sold as original merch at the Major without any credit. He took to Reddit to get in contact with eGG Network, the company who created the merchandise, to resolve the issue. They responded almost immediately, looking to resolve the issue as quickly as possible which had fans of the giving them a commend for being so cooperative.

The next tournament for Dota 2 fans to look out for will be the Megafon Winter Clash where six teams will be battling it out in Moscow, Russia for a prize pool of $300,000 USD. The Closed Qualifier for the last spot at Megafon will be happening this week so stay tuned to see who gets the last spot at Megafon! For those closely following the DPC, the next event will be the Bucharest Minor in Bucharest, Romania on January 9th-13th, 2019. The Bucharest Minor will be the first minor of the season and will have eight teams competing for DPC points, a prize pool of $300,000USD and an invite to the Chongqing Major. This minor has a lot of the line for teams and you’ll not want to miss this tournament.