Kobbe: “We Didn’t Have Much to Lose. We Were Already in a Difficult Position” 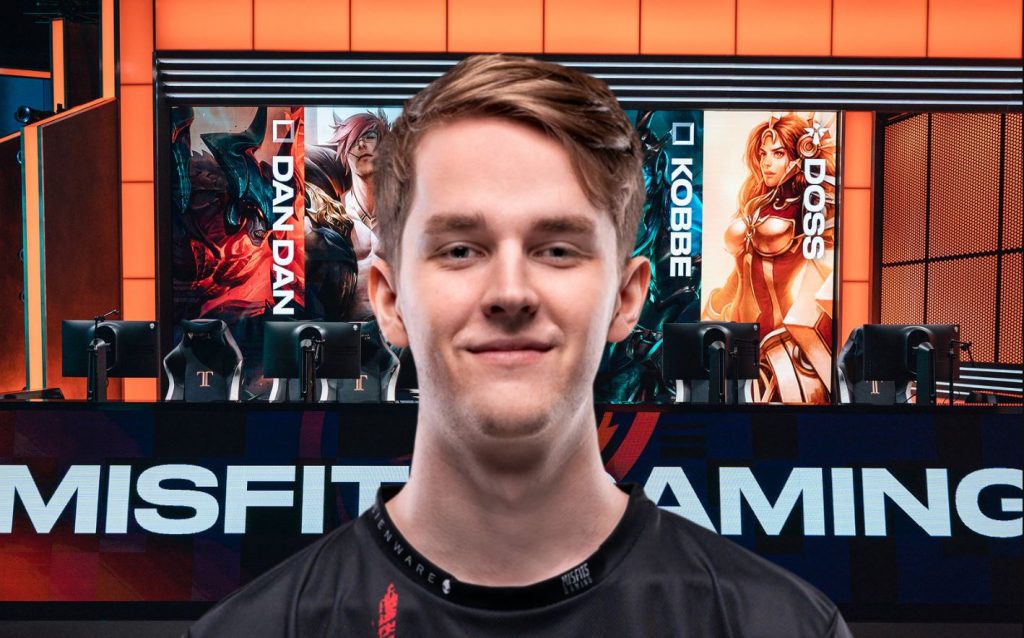 Kobbe and his Misfits teammates need to step it up if they want to reach Playoffs. (Photo courtesy Riot Games)

With the LEC being closer than ever before, the pressure starts to mount on the teams in the middle of the pack. Currently, seven teams are within two victories away from each other in the standings. An unprecedented feat. Among them, surprisingly, the titans of G2 and Fnatic. But also the hopefuls, the teams that realize this is the chance to grab a ticket to the World Championship.

For Misfits Gaming, the Summer Split started fairly well, ending with more wins than losses. However, the second half turned sour real quick, as the team emerged winless from the fifth and sixth week. This week, finally, Misfits picked up a win again. We spoke to their bot laner, Kasper “Kobbe” Kobberup, about the hard-fought victory, why the team decided to sub in Denyk as their support player, and the tense last few matches that he has to play in the Summer Split.

Hotspawn: Welcome Kobbe! It was a very close match against SK Gaming, but you did come out on top after all. Did you expect it to be this close?

Kobbe: Well, coming into the match I didn’t really have any special expectations about whether it would be close or not. But I think we were pretty comfortable with our draft and got a solid early game. Then we screwed up a bit, a few times actually, which made it more difficult for us. I think the enemies, with their composition, didn’t really want to do anything. They just wanted to scale and go for the late game. But we knew that we could win the game all along. We got a few good fights, got the Baron Nashor, and turned the game around again.

After losing four games in a row, it was pretty apparent that we needed to change something

Hotspawn: You say that you didn’t have special expectations for the match. Still, SK Gaming has been performing surprisingly well this Split. Did you have any preparations specifically targeting them?

Kobbe: I wouldn’t say so, really. We mainly just focused on ourselves. Before today, we had five games left to play and we have to win most of them, if not all of them, if we want a shot at making it to the Playoffs. Of course, we prepare for every opponent. But it’s mainly just looking at ourselves since we need to get our own play on a good level in order to win the games we still have to play.

Hotspawn: Week five and week six of the Summer Split did not go well for your team at all, as you went 0-4. Upon reflecting, what did the team think that needed to be changed to turn this around?

Kobbe: We had a 5-4 score in the first half of the Summer Split, I think, and we were in a decent position. Then the break between week four and week five happened, and I’m not really sure where it went wrong. Of course, we had smaller issues, but no huge ones, I would say. Things were going fine. But then those two weeks happened where we went 0-2 and I didn’t really know why it went that way. I feel like practice was going fine, but we just didn’t show up at all when it mattered. After losing four games in a row, it was pretty apparent that we needed to change something up. So yeah, that was obviously the support swap, with Denyk coming in.

Hotspawn: We only have seen one game with you and Denyk, obviously, but it looked pretty solid. Was the bad record in this second half of the Summer Split the only reason for Denyk to be subbed in, or are you guys pivoting in playstyle too?

Kobbe: I think it was mainly just that we went 0-4, and that is a very rough position to be in, obviously. We’re still in a rough position, even though we won this game. So we just felt that, if we keep doing the same thing, it would probably not suddenly give us five wins. I think it’s fair that, in that position, you try to change something up. We didn’t have much to lose. We were already in a difficult position.

Hotspawn: How was it for you to team up with Denyk in the bot lane? He was the main support for Misfits in the Spring Split, but since you joined later you hadn’t had the chance to build any synergy with him yet.

Kobbe: The two supports do have a bit of a different playstyle, I would say. Denyk played with the others for the whole Spring Split, and therefore he has more built-in synergy with them. We knew that it wasn’t going to be a huge flip for us, since he had already played with the team. Only not with me yet. For me, it was pretty fine. They are two different players, but in the end it doesn’t matter too much for me. I can just adapt and do things differently as well. We just look at whatever is going to be the best for the team, and I can adapt to that.

Kobbe: Hm, Denyk takes a lot of shotcalling responsibilities I guess. He works really well with our jungler, Razork, since they played together for a long time as well. He also roams a lot, and he makes a lot of calls for us. He’s very confident in the game. I mean, this game he had a lot of deaths. *laughs* But he still made a lot of good things happen for the team.

Hotspawn: He was a good enabler during this game.

Kobbe: Yeah, he did that well.

If we don’t [make it to playoffs], it’s a pretty disappointing year for me,

Hotspawn: When you have to play with new supports all of a sudden, do you bank on your experience as a seasoned bot laner and the fact that you have played with many different support players already? Can you “go back” to a support player who had a similar playstyle, and remember immediately how to shift gears?

Kobbe: Yeah. I mean, I’ve played with a lot of supports, right? Like, I’ve played with five or six different ones, I suppose. So it’s not that I just have my own style and that that’s what I play, no matter what the circumstances are. You always need to find a middle ground with whoever your support player is. Obviously, throughout my career I’ve learned different things. I’ve played with Mikyx, who was my first support player, and who was really strong in the laning phase. Therefore we could have a stronger lane together and focus on that. I’ve had other supports who were not that strong in the lane, so you can’t really play to win your lane. Then you have to look for other things to gain an edge. This has obviously helped me a lot. Going through many rosters and supports has taught me to be very adaptable to whatever situation. You just need to find the best chance of succeeding with what you have.

Hotspawn: Looking forward, there are four matches you still need to play in the regular Split of the LEC. Is there a personal objective, something you want to achieve for yourself during the remaining matches?

Kobbe: I just want to do as well as I possibly can. So far, this year has not been great. Mainly my Split in North America was pretty disappointing. When I got back, I felt like I was on the right track, it was going up, and then we had these two horrible weeks. Right now, we just want to make it to the Playoffs. That’s all there is. If we don’t do that, it’s a pretty disappointing year for me, I would say. We have only four games left, and we need to try to win all of them and get to the Playoffs. That’s all that’s really on my mind.

Hotspawn: You’re playing against Excel, G2, MAD Lions, and Vitality. Two of those stand out as particularly difficult: G2 and MAD Lions. Do you think they’ll be the more difficult ones for you to beat?

Kobbe: On paper, sure. But it’s not necessarily any different for us. We beat MAD Lions when we first met this Split, and I think we beat the other teams too except for G2. But in a best-of-one format you can lose to the worst teams and you can win against the better ones. It’s a best-of-one, so a lot of things can happen. It makes it somewhat comfortable for us, knowing that we can beat these teams. But we just have to take it one game at a time, which is what we have been doing.

Misfits’ next opponent will be Excel Esports, whom they’ll play against on Saturday, August 1st, at 6 pm CEST.