Kaiwing: “We made sure that every teammate is in really good shape” 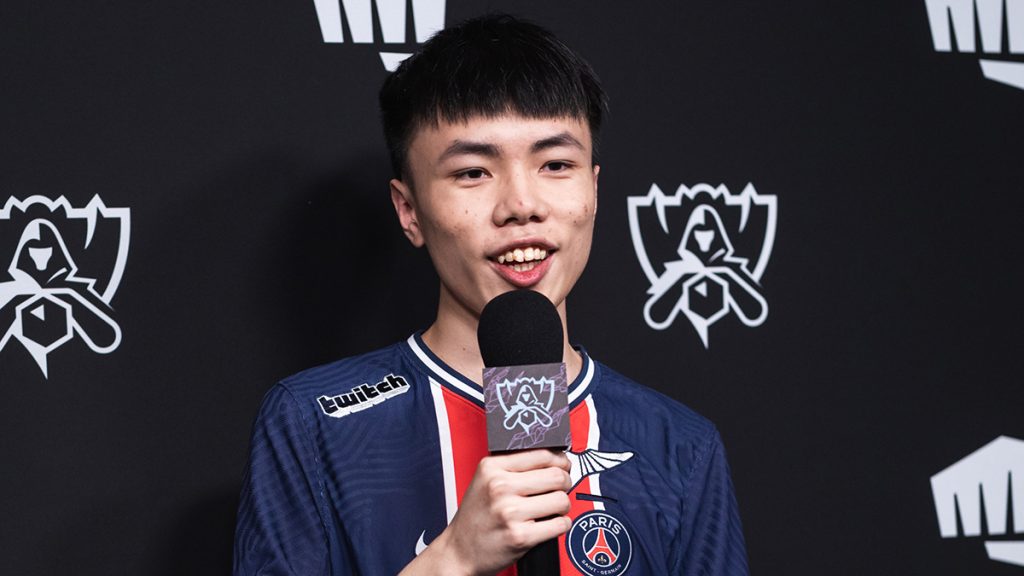 While no longer in contention for the title, Kaiwing cherishes his time at the World Championship (Photo via Riot Games)

Unfortunately for fans of the Pacific Championship Series, all the region’s participating teams have been eliminated from the League of Legends World Championship. Machi Esports bit the dust yesterday in Group A, and today PSG Talon was sent home in Group B. However, they put up a show. With an 0-3 standing heading into the day, PSG Talon did not hold back and managed to defeat JD Gaming—one of the tournament favorites—and Rogue, landing them a third spot in the tough group.

After their final match, PSG Talon’s support player Ling “Kaiwing” Kai Wing joined us for a brief interview. He spoke about his team’s warm-up before today, what went right and what went wrong, and why he and his team always seem so positive, no matter the outcome of their match.

Hotspawn: Thank you for joining, Kaiwing. I’m not quite sure whether to congratulate you on the great day PSG Talon had result-wise, or whether to offer sympathies since you didn’t make it out of Groups. Both, I guess. How are you feeling about the day?

Kaiwing: I think it is a really big pity that we didn’t make it. I think, if we had had a really good form in the first round, it would have been possible for us to advance from the Group Stage.

Hotspawn: Today you played three matches, meaning a lot of preparation had to be done. How did preparing go for you?

Kaiwing: So, when I went to the World Championship last year with HKA, we lost in the Group Stage and we finished there. For today, I realized that if even one player isn’t in really good form, that will make the games very hard for us. Before we left the hotel we cheered ourselves up and we made sure that every teammate is in really good shape. Just take it easy, and try our best to take it one match at [a] time.

Hotspawn: In the first match you faced DAMWON, who have been looking very strong this Worlds. What was your mindset heading into the match against them?

Kaiwing: Against DWG, we drafted the Tahm Kench and we planned to fight them at level one. We targeted their top laner and wanted him to force his teleport and flash, while also killing him to get an early advantage and snowball that for the match. We wanted to play dominantly in the mid game and late game. For our team, I think our mid laner and our jungler did a really good job. I think, in the first round, we played really well and even could take DAMWON Gaming. In the second round, I also think it was possible to take them down.

We didn’t realize that Nuguri could counter our strategy and break our target. We tried our level one strategy before, and then it worked. But Nuguri is a very strong player. After we lost the level one fight, it became a really hard game. Especially for our bot laner.

Hotspawn: After you lost against DAMWON, your team recovered really well and played impressively strongly against JD Gaming and Rogue. How did you manage to stay so resilient?

Kaiwing: Well, after losing the first game, it was sure that we would not be able to advance from our group. But before today, we planned three different strategies against each individual opponent. Despite the fact that we lost our first game, we knew that we had planned well for the other two matches and if we played well and tried our best that we could definitely take them.

Hotspawn: Something I’ve noticed is that the PSG Talon players almost always look happy. You yourself are smiling now, and on-stage there seems to be an incredibly positive vibe. How did you guys stay so positive all the time?

Kaiwing: I think that all our opponents are very strong teams if they’ve been able to make it to Worlds 2020. We feel very lucky that we can step into the same tournament with them. We got the first seed in the Play-In Stage and we feel very happy with that too. During the entire process from playing in the Play-Ins to playing in the Group Stage we just felt very glad. When we went 0-3 in the first week of the Group Stage, we thought about our playstyle. Is there something wrong? What are the mistakes we are making? We saw that we weren’t doing so well, so for the remaining matches, we made sure to give it our best and show the audience what we can do. And I think we did well in the other matches.