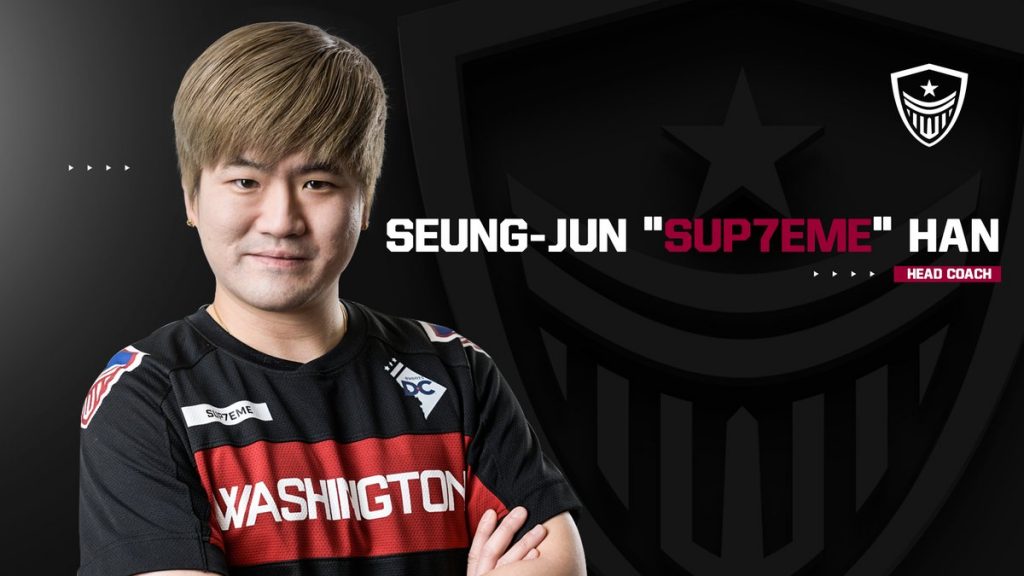 Sup7eme's promotion is the latest of many changes to the Justice roster, meant to improve the teams performance. (Photo courtesy Washington Justice)

The Washington Justice announced on Wednesday that they have promoted Seung-Jun “Sup7eme” Han to their Head Coach position. Sup7eme was formerly working as the Washington Development Coach. He is replacing former Head Coach Seetoh “JohnGalt” Jian Qing, who stepped away from his coaching role on June 5th to pursue his education.

Please join us in congratulating Seung-jun “Sup7eme” Han on his promotion to Head Coach!

We're so excited to have @Master7supreme transition into this position to lead the team.

Sup7eme has been involved in professional Overwatch since 2017, when he founded and coached the South Korea Overwatch team Seven. While working with Seven, Sup7eme had the opportunity to coach a number of future Overwatch League players, including Spark player Jun-Ki “Bazzi” Park, Spitfire player Gil-seong “Glister” Lim, and Ho-Sung “TTuba” Lee who is also currently playing for the Washington Justice.

In 2018, Sup7eme left Seven, along with Bazzi, Jaehwan “Adora” Kang, and Hyeong-Geun “Revenge” An, to join the inaugural line up of the Hangzhou Spark. At the end of 2019, Sup7eme left the Spark for the Washington Justice, where he served as a Developmental Coach.

Wednesday’s coaching change is the latest update for the Washington Justice organization, which have seen tremendous alterations over the past couple of months. In early May, both Corey “Corey” Nigra and Ethan “Stratus” Yankel left the organization, with Corey moving to VALORANT and Stratus switching to full time content creation . Then, on May 20th, Washington released their general manager Analynn “bawlynn” Dang and their Individual Coach Chris “Bani” Benell. Aaron “PRE” Heckman was promoted to replace Bawlynn as general manager.

The Justice organization’s aggressive changes are most likely a response to their struggle to find success in the Overwatch League throughout Season 3. The Justice are currently placed 18th out of 20 in the overall standings, and have only won three games so far this season. These drastic shifts in management, coaching, and their roster appear to be a mid-season attempt to rebuild and rethink their lineup, in hopes of finding greater success in the second half of the season.

The Justice will face the San Francisco Shock on Sunday at 4:00 PM PDT in the second week of the Summer Showdown Qualifiers.