Jactroll: “At Origen, Everyone Understands Me and Listens.” 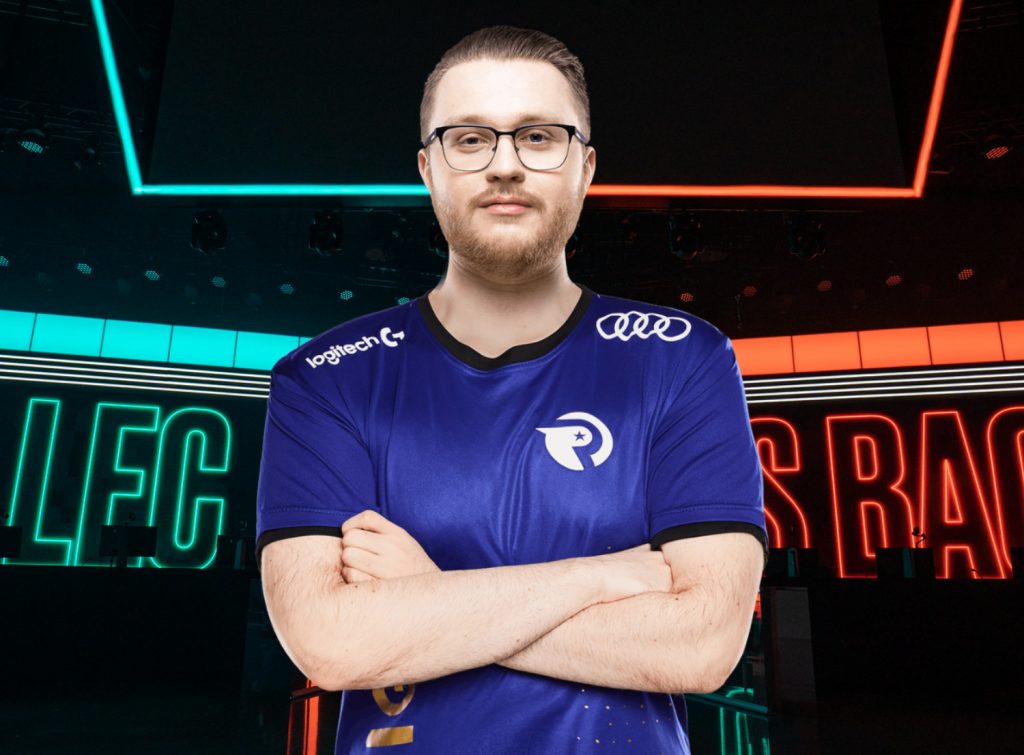 With the addition of Jactroll, Origen hope to turn a bad start around. Photo courtesy of Origen / Michal Konkol for Riot Games.

The LEC Summer Split has kicked off the second round robin phase. After the first half brought many surprising results, both positive and negative, it’s a true do-or-die scenario for many teams. Origen decided to spice up the Split with yet another surprise. After a disappointing 4-5 score in the first half, the team signed Team Vitality’s substitute support player Jakub “Jactroll” Skurzyński to their roster during the one-week break. It paid off: Origen beat reigning champions G2 convincingly in their first match after the break.

We spoke to Jactroll after his debut for Origen. The Pole walked us through his sudden signing to the Origen roster, what it meant to him to leave Team Vitality, and how his experience and vision can help Origen redeem themselves this Split.

Hotspawn: Your move to Origen was a big surprise to many, as it happened right in the middle of the LEC Summer Split. Can you walk me through the past few weeks, and how you learned that Origen were interested in adding you to the roster?

Jactroll: So, first of all, thank you very much for inviting me to the interview. I couldn’t imagine a better debut with the Origen team. It was a challenging match for me, because G2 still are the kings of Europe.

Alright, back to answering your question. *laughs* It’s all a pretty funny story. I was renting an apartment in Berlin while I was still on Vitality, but I wanted to save some cash. I bought an apartment in Poland and I wanted to move into it soon. I was actually supposed to move there this past Thursday [July 16th]. But about a week ago, Origen came to me and said that they are interested and that they want me in the team. So I was basically in the middle of moving out to a new place when they reached out. I was shocked. I had mentally prepared to move to Poland, chill a bit, and then grind solo queue hardcore to try and get good offers for the next LEC year. I didn’t think there was much hope for me to get an offer in the middle of the Split.

Everything was resolved pretty quickly with Origen. They invited me to one scrim, which I agreed to. Basically, that’s how the deal was done. There was some negotiation from one side with the other, and then I signed the contract.

I was confident about my abilities to win a spot, and so far I am winning it.

Hotspawn: So they contacted you last week, played one scrim with you, and then they said: “let’s do this”?

Jactroll: Well, they wanted to bring in a substitute support player anyway, to have some competition with Destiny. I was one of the favorite candidates to be that guy. They liked me so much that they just signed me, and now you can see me in the main roster.

Hotspawn: Did Origen offer you the starting position when they reached out to you?

Jactroll: It was always going to be a competition for the starting spot. I thought: “we’ll see.” I just knew that Upset really wanted to play with me, and I also really like to play with Upset. I was confident about my abilities to win a spot, and so far I am winning it. We will see how it resolves in the future.

Hotspawn: Since you were signed on such short notice, there was an incredibly limited amount of time to determine whether you or Destiny would be starting this week. How did that process go?

Jactroll: It was last week. Destiny played some scrims on Thursday, and I played scrims on Friday. The player who played better during these days was chosen to play the scrim matches for this week, and also the match days during this weekend. The team wants to have the most practice they can with the support player they’re playing with during the weekend. I played well on that Friday, so I played until the end of that week. From Monday onwards, I was also the player playing, which resulted in me playing on-stage this weekend. I don’t know yet what it’s going to be like next week.

Hotspawn: You’re leaving Vitality behind you, a team you had been a part of since December 2017. While you were benched by them this Split, I can imagine it was still tough to say farewell to the organization.

Jactroll: Well, as you may know, we had tryouts in Vitality in May after the disappointing Spring Split. A couple of days after the Spring Split finished, our coaching staff announced that there would be tryouts for every position. But I knew they would mostly be looking at the jungle and support position. I think that was fair. Something had to change in order for this team to work.

I was really bitter when Vitality told me that they would be going with Labrov in the end.

During the tryouts, I was playing super well. I think I actually smurfed throughout the whole tryout process. The tryouts were set up so that there were two different teams, with two different rosters. Then we’d play the same drafts to decide who would play the next day and stay in the tryouts. I won’t mention the names of those who were there during the tryouts, but Labrov and I were the ones who played the most games in the support role. It was basically a competition between me and him during that period.

In this team I have experienced one of the best moments of my life and for that I will always remember Team Vitality.

I was really bitter when Vitality told me that they would be going with Labrov in the end. Duke told me that I played wonderfully and that I am stronger than him in some aspects. But in other aspects, Labrov was stronger than I am. Many teams were interested in Labrov, so Vitality felt like they had to take him as soon as possible. I think it might pay off for him in the future. He’s a prospect. My contract was running out this year, I’m a veteran, and I also had a disappointing Spring Split. It would have been a huge gamble for Vitality to give me a new shot in the Summer Split, even though I was the best-performing support player in the tryouts. From a rational point of view, it makes sense for Vitality to take Labrov.

When they told me that they would take Labrov, that was basically a goodbye from me to Vitality. I was already accepting my fate, and I knew that this was the end for me at the team. When Origen contacted me, there were no emotions for me to feel anymore for leaving Vitality. I already had felt those emotions at an earlier point.

Hotspawn: I know you’ve been with Origen for merely a week now, but what have been your first impressions of the team now that you’re a part of it?

Jactroll: So, I played scrims with them on Friday and Sunday, remotely from Berlin. I arrived in Copenhagen on Monday. But I noticed that they really needed some change in their environment. A new player on the team refreshed that environment and benefited them well mentally. It was like a reset for them. I don’t know what was happening before, but that’s what I noticed, also by talking to them. When I started to play scrims with them, we had fantastic results. That also helped us with getting that boost for upcoming matches, which resulted in a win against G2 today.

Hotspawn: You’re a vocal player in any roster you’re on. You’re a shotcaller, a decision-maker. Was that a hole that needed to be filled in Origen?

Jactroll: For sure. I’ve noticed that I have a bit more macro knowledge than my teammates. I think that’s something I have learned from Duke. I improved so much—even if I couldn’t show it on Vitality. I know I became a much better player and I knew that, if I would get a shot, I would be able to show it. Upset was joking that I’m teaching them macro ever since I joined, which in a way is true, but everyone on the team is vocal. It’s easy to make a plan. Yes, I’m the main shotcaller, and I do make the most calls. But it’s nicer here. At Origen, everyone understands me and listens to me. That makes is it a lot easier to follow the plan.

In Vitality, when I played with a rookie team, I could make a plan but people were making so many mistakes that it was not easy to manage them. We just had poor results on stage. Here on Origen, everyone understands what I mean when I make calls. They know the steps to take to reach the goal.

My ambition is to win the LEC with this team and go to Worlds, of course.

Hotspawn: When you enter a team as an outsider, you can have a unique perspective on the team. Where a team might be focused on trying to solve problem X, an outsider could identify that problem Y is actually what is going wrong for the team. Were you able to provide such insight for Origen?

Jactroll: I noticed that they have problems with their mid-game. They were struggling to progress the game and play for tier two turrets. My knowledge allows us to effectively play for those tier two turrets. We even showed that in our match against G2. We got the tier two turret in the bot lane, and then it was easier for us to play for the top side afterward. Our early game has also improved because Upset and I match very, very well in the bot lane. I think that Perkz started to sweat when he saw how big of a difference there was in the creep score. That comes from a very strong laning phase, and from understanding rotations.

Hotspawn: Everybody says that, with the pure talent on the roster, Origen should be able to easily qualify for Worlds. The start of the Summer Split was rough, and you’re still new to the team, but how will Origen turn this ship around and qualify for the World Championship?

Jactroll: My ambition is to win the LEC with this team and go to Worlds, of course. But we want to take it step by step. If we win against Misfits, we’ll be in a very good position in the race for the Playoffs. I think best-of-ones are very scary. Relatively every team is close to each other, and each team can win against every other team. But I think that, once we secure a post in the Playoffs, we can do well in the best-of-five format. I think we should make it to the top four.

*laughs* Ok so, I’ve played like five days of scrims with this team, but we’re already on a good level now. If we just keep progressing, and if we stay down to earth and not get cocky, we’re going to achieve the goals that we have set. We have to keep working hard. The most important thing is to keep both feet on the ground. If we do that, then we’ll get there.

Origen play their next match in the LEC against Misfits, on Saturday July 18th at 7 pm CEST.