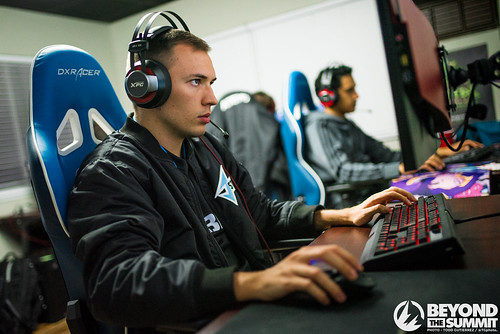 J.Storm has been removed from Valves official registry of DPC Minors and Majors (Photo via Beyond the Summit)

North American organization J.Storm have allegedly disbanded their Dota 2 team, leaving their roster’s future in question. The news was revealed in a report by Dot Esports, who in turn referenced Valve’s own Dota Pro Circuit 2019-2020 Majors and Minors Registration Page.

The news marks the end of a comparatively short but notable existence for the NA team, who most recently competed at the DreamLeague Season 13 North America Closed Qualifiers and ONE Esports Dota 2 World Pro Invitational Singapore. However, disappointing results had led to the team’s elimination from both events and an absence from any Major events in 2020.

According to the aforementioned Registration page, the team is now listed under the team “business associates,” a reference to a title often given to players who are still under contract, but not assigned a roster spot. This leaves David “Moo” Hull, Joel Mori “MoOz” Ozambela, and team captain Clinton “Fear” Loomis, as well as trial players Leon “Nine” Kirilin, and Braxton “Brax” Paulson’s futures in doubt. However, their listing together suggests that this won’t be the last we see from this talented stack.

At the time of writing, no official statement on the team’s departure had been released by J.Storm. The team’s most recent posts on social media date from January 19th, where the team retweeted a pair of its former Fortnite FNCS players Free Agent announcements.

I'd like to officially announce that I'm now a Free Agent. Thank you @Team_JStorm for the opportunity I really enjoyed working with you!

This latest reveal from J.Storm emerged just a day before the ESL One Los Angeles 2020 North America Open Qualifiers were set to start. J.Storm’s roster had previously amassed 920 DPC points and were positioned 8th in the global rankings. Taking into account last year’s final rankings, the team would have easily secured a spot at The International 2020 if they were able to place in just two more DPC events this year.

As it stands, the future of the entire J.Storm organization seems to be in question. With little to no activity on their social media, a home page that hasn’t been updated since August 2019, and s series of players being released, the company’s situation seems grim. The team billed as “Jeremy Lin’s Esports Organization,” a reference to the team’s association with the former NBA player, now looks destined to collapse.