It’s Anyone’s Race in NA at ESL One LA 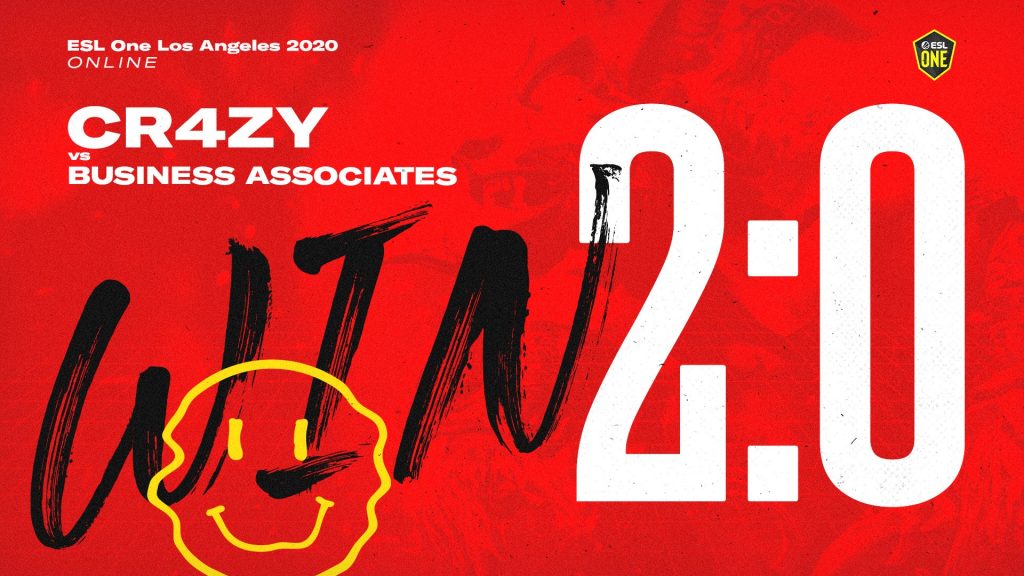 CR4ZY definitely benefited from the new online format of ESL One Los Angeles, with their opponent's suffering from disconnects. (Photo courtesy CR4ZY)

It’s not quite the tournament we expected, but at the new-look online ESL One Los Angeles Major, NA has still delivered some top action after just one set of matches. In two thrilling series, we saw the region’s top team fall short, and two eager hopefuls in a close clash.

Just like the Southeast Asian and South American tournaments, the format for this online event sees two games played over a single “Matchday” that, ever-so-slightly confusingly, takes place over two days. As a result, our first “day” featured Evil Geniuses taking on the Quincy Crew, and CR4ZY clashing with business associates, both hotly contested series between well-matched teams.

Kings of NA no more?

From the outset of Saturday’s match, things didn’t go well for Quincy Crew. With a weak first draft, and a decision to focus on late scaling heroes rather than early power, the team largely gave up in lane. As a result, Artour “Arteezy” Babaev’s Terrorblade was able to scale up very quickly, picking up a pair of Wraith bands and pushing down lanes. QC attempted to staunch the bleeding with some desperation fights, but ultimately the Terrorblade was too much, with EG taking the first game in convincing fashion.

To stop this series from becoming a quick 2-0, Quincy Crew used early pressure in the second game to prevent the Arteezy Terrorblade from farming. EG’s bottom lane was ganked over and over again, and as a result, Yawar “YawaR” Hassan’s Slark transformed into a monster that could easily push down Barracks and take the second match. QC evened up the score, sending us to game three.

Big plays coming out from Quincy Crew! They dismantle @EvilGeniuses thanks to the deadly @YawaR_YS Slark 🐟 #ESLOne

In a final, messy game, EG and QC both desperately attempted to secure the win. However, the panic and pressure seemed to get to both teams, as EG forced fights, and QC found themselves caught out.

Every time one team got a small advantage, they seemed to give up kills elsewhere. After almost 20 minutes of constant fighting, QC’s Medusa finally started to roll, and just a few minutes later, they’d claimed victory.

This was definitely not a match EG expected to lose, and with this minor upset, the whole face of the NA Bracket has been thrown into disarray. With an underperforming Evil Geniuses stack, there’s a chance anyone could take the top spot in the region at ESL One.

In an ESL One matchup that could have gone either way, CR4ZY and business associated butted heads in one competitive game, followed by one disappointing stomp. CR4ZY also entered this matchup with a distinct disadvantage, with two of its cores playing on 150+ ping, although it ultimately wouldn’t make a difference.

The series started with a bang, with business associates picking Weaver mid, which was quickly countered by Jonathan Bryle “Bryle” Santos De Guia’s Meepo Game. After a quick first blood top showing that high ping isn’t the end of the world, CR4ZY looked to take control of the game. However, Leon “Nine” Kirilin on Mid Weever roaming across the map grabbing kills left and right. What’s more, mirroring the EG game from Saturday, BA’s Terrorblade was hard farming to rush a crucial Black King Bar. This would culminate in a fight in the top lane, that saw Bryle’s fed Meepo die.

A questionable decision to go right back to the top lane left CR4ZY high and dry. But not to be outdone in the throws department though, BA decided to take an awful dive into CR4ZY’s high ground, almost wiping their team entirely. Following this, a pause hit the game, as Business Associates’s Team Captain Clinton “Fear” Loomis was struck with a power outage. This was to be the nail in the coffin for BA. Fear never reconnected, and the team lost just two minutes after the half an hour pause finished.

In the next game, Fear returned, but perhaps shaken by the long disconnect and pause, had a horrendous draft. CR4ZY’s composition was far better at taking objectives, so as the 10-minute mark of game two, Naga Siren and Void Spirit were quickly able to take their lane’s structures.

Following this, business associates got caught out multiple times after failing to get vision in their jungle. From there, things went from bad to worse. In a cascading fashion, CR4ZY took tower after tower, finally ending the series with a dominating game two performance.

A beautiful fight from @gocr4zy pushes them further into the lead over @BusinessDota! #ESLOne

After one set of matches, the NA region is looking closer than it has in months. The superiority of EG has been brought into question, with the online tournaments perhaps giving some of their opponent’s an edge. The NA group stages of the ESL One Los Angeles Online tournament continues until April 1st. All the action can be caught daily on ESL’s official Dota Twitch channel.