INTZ Redbert: “It is really frustrating that we lost against Legacy” 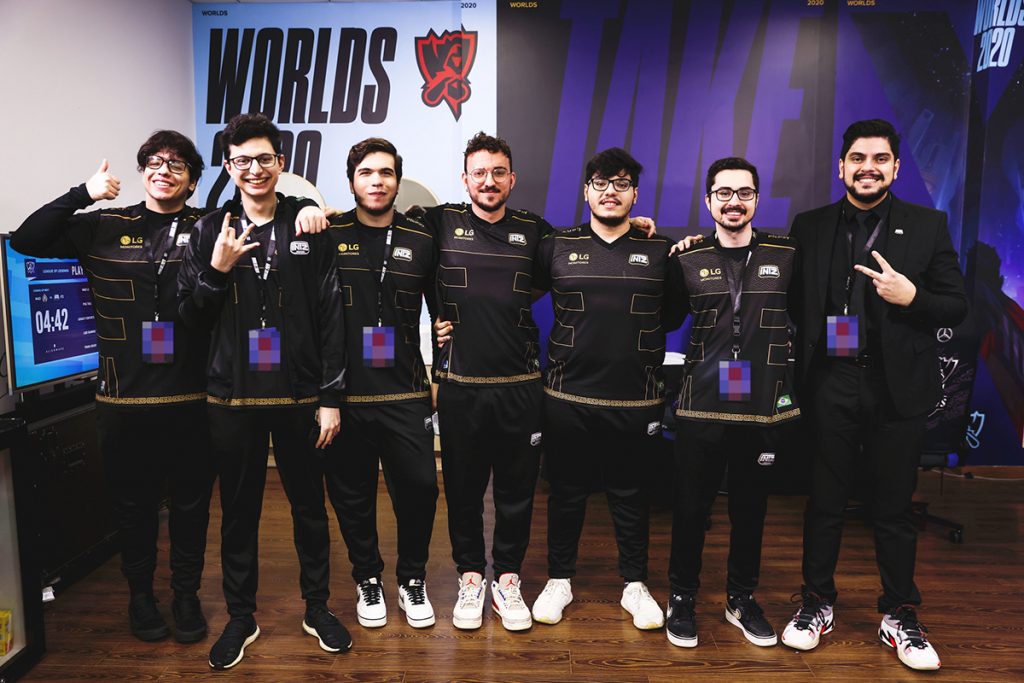 For Brazilian team INTZ, the League of Legends World Championship couldn’t have started in a more frustrating way. The champions of the CBLoL played two winnable games but failed to come out on top twice. Against a scrappy MAD Lions, INTZ was toppled because of team fight skills. Against OPL team Legacy Esports, in a game that felt like a pandemonium, INTZ’s messy coordination cost them the game. Nevertheless, INTZ support player Ygor “RedBert” Freitas was happy to talk to us in an interview.

Redbert discussed both matches and explained what went wrong within his team on the opening day of Worlds. He also touched on the two opponents he still has to play against in his group, and how he plans on securing a win against them both.

Hotspawn: Welcome Redbert, thanks for joining. Sadly enough you didn’t manage to win today and lost both matches, but let’s walk through them one by one. In the first match, against MAD Lions, it felt like the teams were pretty close. Did it feel the same to you?

Redbert: The match itself was a bit frustrating for us. Even though we were winning some fights and came out ahead with some rotations on the map, we were still behind in gold because of the farm difference and the turret plates that MAD Lions managed to get. To us, it was ok to lose to MAD Lions, a European team. But it is really frustrating that we lost against Legacy. That was definitely not what we had hoped for.

Hotspawn: Did you expect MAD Lions to be the toughest opponent you would face in the Play-In group stage?

Redbert: Yes. I personally believe that MAD Lions is the toughest opponent that we have among the four teams that we’re playing against. Right after them, it’s Team Liquid.

Hotspawn: How did you prepare for MAD Lions? What were you focused on when playing against them?

Redbert: We studied them a lot, actually. It was quite hard to plan for them, but we felt that during their rotations they leave their bot laner behind a lot. The support does a lot of the playmaking for them, and we were expecting to get more pick-offs on the support and AD carry while they were doing their rotations. That’s how we expected them to play against us, based on what we knew about them.

Hotspawn: Unfortunately, you lost the match. Did you have time to reflect on the match, or were you immediately preparing for your next match against Legacy?

Redbert: We did go over what our mistakes were during the match, but we didn’t go deep into what we could have done or what MAD Lions might have done in different situations. We just focused on not making the mistakes again. We mainly focused on how we would play in the next match.

Hotspawn: What type of mistakes did you pick up on from your first match that you wanted to iron out heading into the next match?

Redbert: What we tried to do more against Legacy is to really play according to our composition instead of responding to what our opponents were doing. We wanted to set the pace of the match. Unfortunately, we didn’t manage to do that very well in our game against Legacy either.

Hotspawn: From a viewer perspective, the match against Legacy was pure chaos with fights happening constantly and all over the map. Did it feel as chaotic to you when you were playing the game?

Redbert: During the game, it didn’t feel that chaotic to us. We were just following the enemy and whenever we saw someone on the map, we would give up some of our objectives and try to get a pick on one of Legacy’s players. So it wasn’t that chaotic for us during the game, but now, when we watch it, we completely understand it and see that it was actually a very chaotic game.

Hotspawn: You said earlier that your loss against Legacy was frustrating to you. Did you expect them to be one of the easier opponents you would face?

Redbert: I wouldn’t say that I expected them to be the easiest, but I would them as a less difficult team for sure. In this phase, they’re one of the teams we have to beat in order to make it out of the Play-Ins. That’s how I would put it.

Hotspawn: Today you had to play two matches, but your schedule is calmer from here on out. Will that be a large benefit for INTZ as a team, or are you comfortable playing multiple games against different opponents in one day?

Redbert: I don’t think that playing one or two matches is the trickiest part for us. I think that the trickiest part for us was that we were playing our first matches against teams that were also playing their first matches. We don’t have that much material from them playing at Worlds. I believe that we can benefit more from this in our match against Team Liquid. We won’t be their first opponent, so we can study better how they will be playing against us.

Hotspawn: Looking ahead, you only need to finish fourth in your group to stay in the race for a spot in the Group Stage. You still play against Team Liquid and Papara SuperMassive. Which of these teams do you look forward to facing?

Redbert: For us, Team Liquid will be the harder opponent to play against. We play against them on Monday and it’s a match we’ll really be looking into. We had an opportunity to play against them when we were still in Brazil—we played on 150 ping—and it showed us that they were really, really strong at that moment. But I’m looking forward as well to the match against SuperMassive. We believe that that’s the one that we might not have as many issues against.

Hotspawn: There is obviously also a rivalry between Brazil and Turkey that goes back years. Does it give you a mental boost when you’re up against a team and know that beating them would have a great positive effect on the passionate Brazilian supporters?

Redbert: I think this rivalry exists more between fans of the two regions. As a player, I don’t really see it that way. For me, SuperMassive is just another opponent that we will have to beat. So no, it doesn’t change that much for me personally.

INTZ’s next opponent at Worlds is Papara Supermassive, who they’ll play on September 26 at 11 a.m.