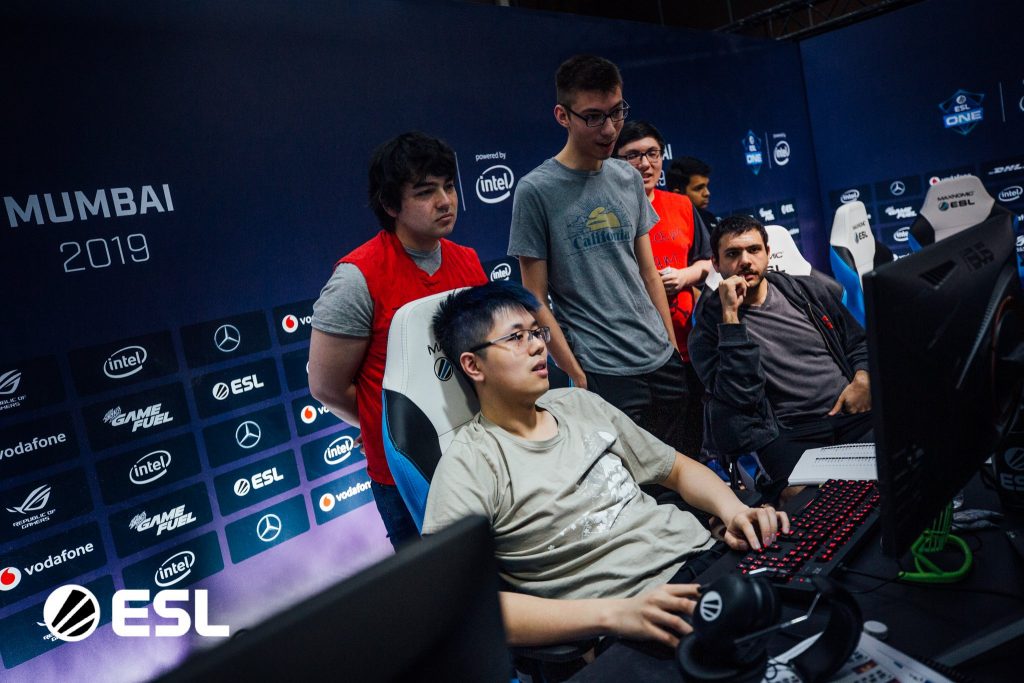 Currently, Gunnar is competing with Team Team at ESL One Mumbai 2019. (Photo courtesy of ESL One)

Dota 2’s Team Team’s recent MDL Disneyland® Paris Major qualifier run was one of the most unexpected runs from the past Dota Pro Circuit (DPC) season. After recently reaching rank one on the leaderboards and becoming a notable Twitch streamer, especially in North America, mid player Nico “Gunnar” Lopez has become a rising figure within the Dota 2 community. I spoke to him about his Dota career so far, his life playing with Team Team and Twitch streaming.

Although Gunnar’s only come into the limelight recently, like many Dota players he has been playing the game for a number of years. He told me that he was originally a fan of another Valve game, Team Fortress 2. A one-versus-one bet for in-game cosmetics led to his transition to Dota 2. “I ended up winning and he told me he didn’t actually have any hats but he did have a beta key for this game. I looked Dota up on the Steam store and I thought it looked cool. I thought, ‘it’s not a hat but I get a whole game.’ I had played Age of Empires but Dota was my first MOBA. I had mostly played FPSes. I had one of my good friends called Dreamer help me learn a lot of stuff. He helped me change all of my keybinds to the same as his. They’re still the same now.”

Gunnar’s always been ambitious about his prospects in Dota 2. He calibrating at 3K MMR, which he noted was better than his friends at the time. Gunnar knew he wanted to go pro early on, saying, “I watched TI3 and was like, these guys are so good, I wanna play like them. I’ve always been trying to go pro, I play for enjoyment but it’s always in the back of my mind that I wanna get better at the game.

At 19 years-old himself, I asked Gunnar his opinion of people who attest bad decision-making to the young age of some players. “There comes a point, once you’re 18, 19, I don’t think being young is an excuse. Whenever there’s a new pro, they’re not gonna be used to being in the public eye, having everything they said as really important.”

Gunnar’s only recently entered the public eye. He told me that, “Two years ago, I was 6k so I wasn’t that good. I joined a team of my friends. We went to a LAN in Canada, it was kinda small. I learned a lot on that team. I got a lot of confidence there. This one guy started talking to my dad, he was an admin or something. He said, ‘your son is really good, he’s the best player on the team.’”

In the past season, Gunnar’s had multiple opportunities to play with big names in the scene such as Clinton “Fear” Loomis and Jacky “EternalEnvy” Mao on Flying Penguins. Gunnar’s attitude to being kicked off of teams, and drama in general, is one of a professional: “When stuff is bad on a team it’s usually not just one person. You gotta think of it like a business, it’s a business decision for the team. You become such good friends with your team that when you get kicked it does kinda hurt. This team that you guys made, they don’t trust you anymore, or they think this new guy is better than you, which isn’t the greatest feeling in the world. But if you wanna go pro even after being kicked you’ve gotta still believe in yourself as a player, regardless of what’s happening. I think you gotta move on. You can’t hold grudges. In six months they might ask to play with you again, you can’t still be hating on them anymore.”

With his mellow personality, consistent streaming, high leaderboard ranking and multiple Twitch hosts from fellow NA mid laner Quinn “CCNC” Callahan, Gunnar’s stream has grown exponentially over the past six months. “I definitely play worse if I’m streaming, especially with webcam on. I think it’s a pressure thing. It’s also that you have to think about everything that you’re doing. Not that I do anything crazy or bad, it’s just the thought of it in your mind. There’s a lot of support for me when I stream, it’s really nice. My mods are really really helpful, they help out in my Discord and post when I have games, it’s really nice. My stream’s getting pretty big so it’s nice to have that support.”

Despite the growth of his stream and his own growth as a player, Gunnar’s not always been confident in his own thoughts. He said, “I used to not trust my opinions as much. I thought, I’m playing with them and they have way more experience than me so my opinions aren’t as refined.”

As I listened to Gunnar describe his path of self-belief, I was struck by his lack of ego. He went on to say, “Recently over the past 2 weeks I’ve been trying to be more confident with my ideas. Every time I think a different way about an idea in Dota I’ll say it, like when I think they’re wrong. I always use my gut decisions more now. I used to not talk at all in games, only if people asked me a question. People would say, hey what do you think about this match-up, or what do you wanna do now, or what do you wanna do when you get this item. A lot of questions.”

In the last two weeks, Gunnar’s felt like he’s come into his own. With some encouragement from a teammate, he’s learned to express himself more confidently. “I think one of them said, you hit rank one, you know how to play this game, so you need to stop being worried about thinking you don’t know how to play. After they said that, I thought they’re right, I have some understanding. I’m not terrible. I should go with how I think. All these players have played at LANs and TIs. It’s not daunting; I’m not nervous to play with them, but I thought that my opinions were not as valid as theirs. That’s not a very good way to think about it.”

Gunnar’s current team, the organization-less Team Team, has seen multiple iterations in the past several months. Gunnar replaced Eric “Ryoya” Dong, a player he said had a greedier style, while Gunnar describes himself as “more of a playmaker. So the team played differently and when I first joined the team we were not as strong as I wanted it to be. Recently we’ve gotten a lot better, especially since Envy joined, he’s got a lot of good ideas about the game and I do really enjoy playing with him.

Gunnar shared some insight into what it’s like to play with the EternalEnvy. “You always have to change slightly when you change any player, but the way we wanted to play the game still stayed the same [when EE joined]. He’s very vocal with his ideas, but he also listens, even if you disagree with his opinion on something.”

Having seen EternalEnvy’s stream and his vocal nature within his ranked games, I asked Gunnar if there’s now a different dynamic of decision making in game. “Envy does a lot of our late game calls, he’s really good at them. But there’s not a single person that doesn’t make calls, or at the very least says when we’re strong. [Michael “ixmike88” Ghannam] is still the captain. Even when we’re talking in Discord, Envy will always refer to Mike as the captain.”

Despite the odds being stacked against them Team Team still had high spirits going into the Major qualifiers. ‘Every time you go into a qualifier you have to be confident, you can’t think “oh well, we’re gonna lose every game.’ I think having that mentality is gonna make you play worse and it’s always gonna make you feel worse, in and out of the game. I think for the most part we’re very positive. Like, all right we’re gonna have a long day cause we’re gonna go to three games in our two best-of-threes. We actually said that on the last day of the Major qualifiers.” Team Team ended the Major Qualifiers as the third team to qualify in North America after Evil Geniuses and compLexity Gaming.

ESL One Mumbai 2019 will be the biggest LAN Gunnar will have attended to date and then he’ll go to the Major. “I think I’ll be fine in terms of pressure. At all the LANs I’ve been to I played pretty much the same as at home. I don’t really get LAN jitters. At WESG at CA we played on the main stage, there was a small audience and they streamed it. It didn’t really affect me. In China we never got to play on the mainstage and all of the games were off stream. I haven’t played anything similar to ESL but I don’t really have a fear of playing onstage, I’m just gonna play my own game, play the best I can and try to win.

As the first event in Mumbai, ESL is bringing international Dota players to somewhere they’ve never been before. Professional Dota players get the opportunity to go to many places for tournaments. This early in his career, Gunnar has seldom had the opportunity to travel so far. “The furthest I’ve been from NA was when I went to China (for WESG). Apart from that, I’ve been to Canada twice, for my first LAN, and for TI last year and I’ve been to Mexico a couple of times.”

Despite apparently losing the majority of their scrims, Team Team started strong at ESL One Mumbai winning every game in their group. Unfortunately losing their first main event game versus Mineski has put Team Team one series away from being out of their debut LAN.

Professional, humble and laidback, in my opinion, Gunnar is a great role model for up-and-coming players. I asked him which players he looks up to in the pro scene and who he’s excited to play against. “I am of the opinion right now that Noone is probably the best player in the world. Just overall. So playing against him would be pretty cool. I’ve played against Miracle in battle cup cause he was in NA for TI before. He was playing Rubick mid before it was actually a good thing to pick. It was the whole of Liquid. We indeed lost.”

We wish Team Team good luck for the rest of ESL One Mumbai and the Paris Major.

Dota 2
Share
Cameron Bloom
Cameron is a big fan of Dota 2 and the surrounding community. He's been creating content in the scene for a number of years for Daily Esports, Beyond the Summit and the NADCL.
Follow me