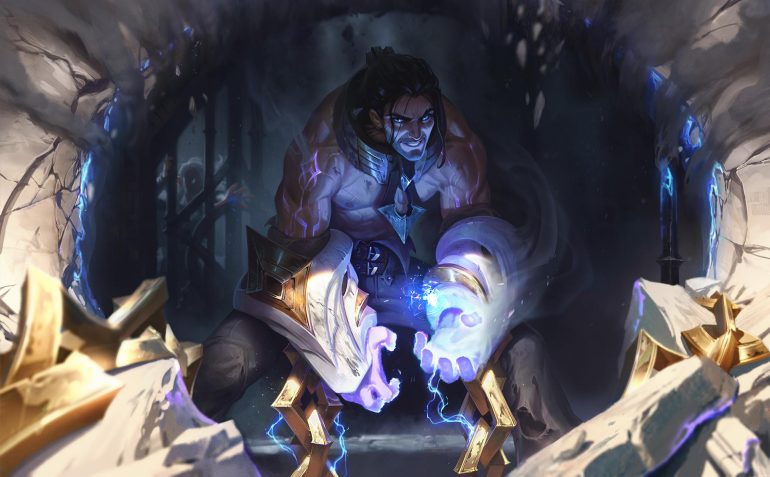 Sylas, the Unshackled has a kit the revolves around the deadly chains attached to his arms.

Riot Games revealed their newest champion Sylas, the Unshackled. Sylas uses the shackles that once chained him to wreak havoc on his enemies and pull himself toward them. Most excitingly, he has an ultimate that allows him to steal the ultimate of his enemies. Here are our initial thoughts and reactions to Sylas and how he will play in League of Legends.

After casting a spell, Sylas’ next basic attack whirls his chains around him, damaging nearby enemies.

Sylas lashes out with his chains, damaging and slightly slowing enemies. After a brief delay, the intersection of the chains detonates, applying an increased slow and damaging enemies again.

Sylas dashes a short distance and shields himself. For a short time, he can recast the ability to whip out his chains, stunning, damaging, and pulling himself to the first enemy hit.

What Role Will Sylas Fill?

Sylas has the tools of a champion that can fill different roles based on the base numbers and ratios he receives upon release. The crowd control of his E: Abscond/Abduct paired with his powerful R: Hijack will keep him in the mix as an unconventional support pick that could be a good counter to certain enemy teams with strong ultimates. Meanwhile, his Passive: Petricite Burst seems to lend itself to efficient jungle clearing. Dashes on his W: Kingslayer and E: Abscond/Abduct seem powerful for ganking and sticking on targets.

All early indications, though, are that he is strongest in a solo lane. MapleNectar of the League of Legends Balance Team for Riot thinks that Sylas will eventually find his place in the mid lane. That sounds right given that we know Sylas is a magic damage dealing champion who could draw comparisons to Ekko. Waveclear from his Passive: Petricite Burst would allow Sylas to clear waves competitively in mid lane. Given how strong he will be as a counter-pick, he should also see some play in the top lane as well.

The most interesting part of Sylas’ kit is how adaptable he becomes based on the enemy team you are facing. This lends itself to a host of different playstyles depending on the state of the game. His R: Hijack can be used on enemy assassins and damage dealers when ahead to help the execution of squishies and to snowball the game faster. When in stalemates and close contests, he can use his ultimate to steal away the ability to create picks and strong engage for his team. When behind, he can look to disengage fights for his team. Sylas just has so many options available to him based on team compositions and game states that it is impossible to determine the correct way to play him until you are in the heat of the battle.

Things in lane are a bit clearer. As a mid laner, Sylas looks ideal for using his abilities to clear waves and threaten roams to either side of the map. He will often be at a disadvantage as a melee champion, so using Teleport and starting with a Corruption Potion seems likely. His kill pressure, funnily enough, will likely be reliant on how strong the ultimate of the opposing mid laner is. Overall, though, roaming to find skirmishes seems like it will be his top priority as a mid laner.

Top lane is a longer lane and will make Sylas more vulnerable to be killed. There are very few magic damage items that also give health and defensive stats, so if he is to be built offensively, Sylas will be very squishy for a melee champion. His ultimate may afford him the ability to build more defensively, but given all of his dashes and the power of his ultimate, it seems more likely that he is meant to be built offensively than defensively. Like in the mid lane, Sylas will have good early wave clear top lane and will be able to support jungle invades and fights over the Scuttle Crab.

Sylas, like Neeko, seems to be great for jungle but the early Riot opinion seems to favor him in lane. This tells us that Sylas probably has very weak jungle sustain and would be susceptible to early invasion. His Passive: Petricite Burst sounds great for killing jungle monster camps, but it’s also possible that the base damage will be lowered against minions and monsters. If he does find a way to clear safely and effectively, Sylas should be a monster jungle pick with his ability to dash twice with W: Kingslayer and E: Abscond/Abduct and pull himself to an enemy laner. He could also prioritize ganking lanes that have powerful ultimates that he could use against the enemies.

Sylas is not seen as a support but does have enough utility that some carry players will end up playing him in the role. His ultimate guarantees that Sylas will always be useful, especially when up against powerful team fighting compositions. If the cooldown on R: Hijack is low enough that you can use it multiple times in a fight, as Riot suggests might be the case in writing “By the late game you can seize multiple ultimates in quick succession,” Sylas’ viability as a support gets much stronger. In lane he will offer little besides the crowd control on his E: Abscond/Abduct, so he will likely be better roaming to affect other lanes.

Overall, Sylas looks incredibly fun and his evolving playstyle will appeal to players who like to think and adapt to different situations in-game.