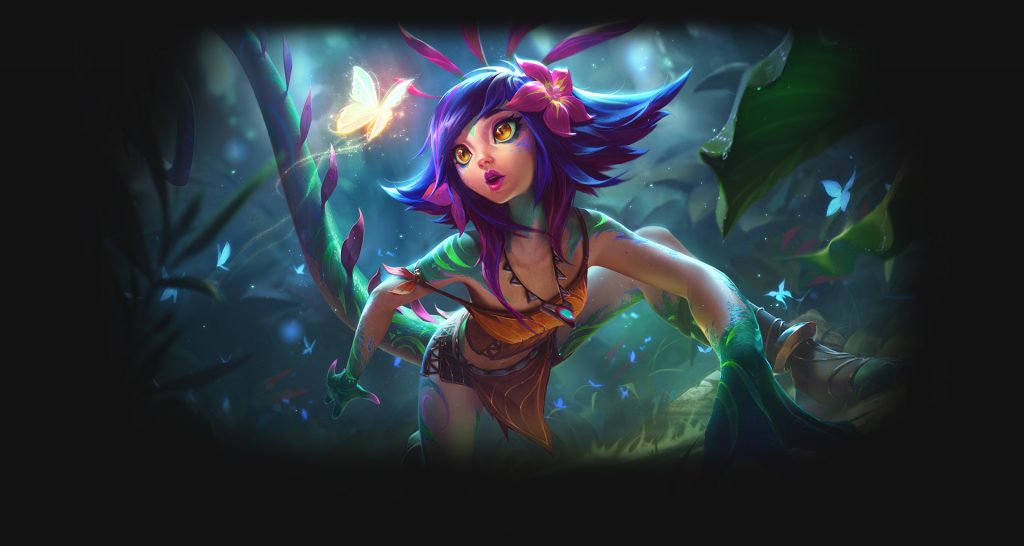 As her name implies, Neeko has a kit that revolves around disguising herself and confusing enemies.

Riot Games released information on their newest League of Legends champion Neeko, the Curious Chameleon today. As her name implies, Neeko’s kit revolves around disguising as other allied champions to confuse and deceive enemies. Here are our initial thoughts and reactions to Neeko and how she will play in LoL.

Neeko can disguise herself to appear as an ally champion. Damaging or taking damage from enemy champions or casting either Blooming Burst or Tangle-Barbs breaks the illusion and increases the cooldown.

Neeko propels a seed into a target area, which blooms and damages enemies. If the burst kills an enemy or damages a champion or large monster, it will bloom again up to two times.

Active: Neeko briefly slips out of sight, becoming invisible, gaining movement speed, and sending a temporary clone of her current form sprinting in a chosen direction.

Neeko slings a magical spiral in a direction, damaging and briefly rooting enemies it passes through. The last champion hit is rooted longer. If Tangle-Barbs hits at least two enemies, it grows in size, speed, and root duration.

Neeko begins charging herself with spiritual essence. A moment later, she leaps into the air, gains a shield, and slows nearby enemies, releasing energy upon landing to massively damage and stun enemies in the area. When disguised by Inherent Glamour, enemies won’t see Neeko’s initial charge-up.

What Role Will Neeko Fill?

It is always dangerous to lock a champion into a role without seeing the numbers. Many champions have had kits that seemed perfect for a jungler, only to have the jungle clear be unreasonable. This is possibly the case with Neeko as RiotScruffy, Lead Gameplay Designer for League of Legends, suggested on Twitter that Neeko is primarily seen as a mid or support.

Neeko does have the traits you would want to see in both of those roles. She has waveclear from her Q: Blooming Burst and her E: Tangle-barbs, crowd control from her E: Tangle-barbs and R: Pop Blossom, and a way to get out of trouble with her quick invisibility and movespeed buff from W: Shapesplitter.

Neeko will have a unique playstyle in whatever role she settles into. Her kit revolves around deception, but her mobility is somewhere between limited and non-existent. This means that set-up for her plays will be key. For maximum effectiveness, Neeko will want to come from fog of war and continually play from the edge of enemy vision. Keeping control of vision will be crucial to playing with or against Neeko.

As a mid laner, Neeko may have a hard time roaming up and down the river without a strong allied jungle presence. A better way for her to get roams off likely comes from lane ganks from spawn. Neeko can use her waveclear to push the lane out, recall to base, and then walk to whatever lane she wants to influence. Teleport would be an excellent Summoner Spell for her to utilize on her roams just to get back to lane, rather than using it to get into fights.

Support Neeko will have more room to make moves around the map without sacrificing minions. She faces the same mobility limitations as mid lane, but has less responsibility to stay glued to a lane. The question from this role will be whether or not she has the damage to make it as a support. She has no ally shielding or healing, and the fact that she is ranged indicates that she will not support a tank build. For those types of champions to work in support, she must have at least adequate damage on few items, or enemies will simply not be punished even when she has good roams.

If she can find a way to clear the jungle, Neeko would have better set-up for roams in this role. Enemies will always be under threat of their laners dropping to fog of vision and reappearing as Neeko. That constant threat alone would have a monumental effect on each lane. Like facing Evelynn, laners would have to constantly evaluate if Neeko could have made an unknown entrance to lane.

Neeko also introduces some interesting mind games on ganks. Camouflaging as the lane she is ganking is one threat, but even the roams of your allies will be stronger. By showing as your allied mid laner while ganking bot, the enemy bot does not know if it is Neeko or the enemy Leblanc roaming down. If you do this enough times, the enemy may eventually not expect an actual roam from your mid laner, giving your mid laner a huge advantage in getting a great position for his or her spells.

Overall, Neeko looks like a great champion for someone who is interested in crafty play and careful planning to stay one step ahead of the enemy.