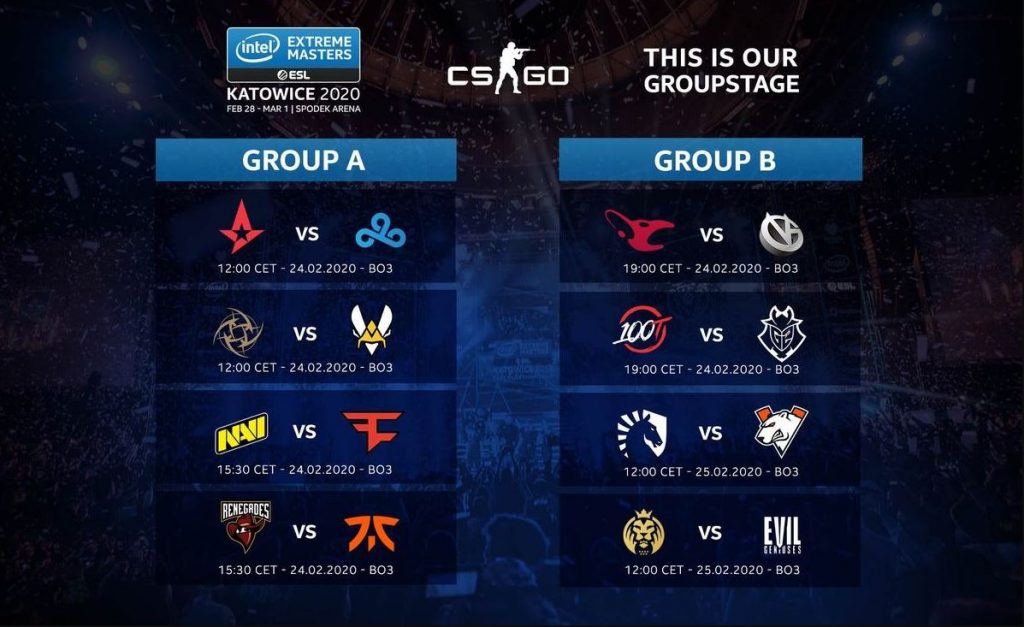 IEM Katowice is less than a week away as Counter-Strike: Global Offensive teams will gather from around the world to compete in the biggest tournament of the year so far. A whopping $500,000 is on the line at the ESL Pro Tour’s first ever Masters Championship event. While it’s not officially a Valve Major, the quality should be up to that standard.

Of the sixteen teams playing at IEM Katowice, seven received direct invites. The other nine qualified by winning ESL Major tournaments or their regional qualifiers.

IEM Katowice 2020 is an event in which over half of the attendees truly can win it all. Every single team ranked in the global top ten will be present, many of which haven’t played against each other recently. As such, the topic of favorites is a complex one.

There are specific teams to watch however. Astralis and mousesports come in ranked first and second respectively. Astralis are looking to continue their reign over the CS:GO scene, but recently fell short at BLAST Premier Spring. They’ve always been good at bouncing back, but the timeframe doesn’t give them much leeway. This is mousesports’s chance to make a strike at the top. They have made the Grand Finals of their past five attended events, winning four of them. Their impressive surge has them pegged as the hottest team in all of CS:GO. If their streak continues, we could be seeing a new rank one team rise.

The third ranked Team Liquid will be looking to return to form. Although the end of last year was slightly bitter for the North Americans, their roster is still extremely talented. Their BLAST Premier Spring performance was average, advancing from their group in second seed. Hopefully Liquid can rekindle their fight for the top spot.

Fnatic will be an interesting team to watch. They ended 2019 with a runner-up performance at ESL Pro League Finals and haven’t played a match since then. The two-and-a-half-month break Fnatic took could help them come into the year refreshed and ready to win. It could also leave them slow to start.

Team Vitality will be a dangerous presence as always. Mathieu “ZywOo” Herbaut Is coming off of winning HLTV’s “Best Player of 2019” award. He carried Vitality to a win at EPICENTER in late December. However, the French team struggled recently at BLAST Premier Spring, losing two matches to Na’Vi and failing to escape their group.

In the category of rising threats, G2 Esports, FaZe Clan, and Na’Vi are all riding off of momentum. Each team topped their groups at BLAST Premier Spring, beating plenty of powerhouses in the process. None of them are ranked in the top five, which could very easily change if they continue their trajectory.

Na’Vi are still adjusting to the addition of Ilya “Perfecto” Zalutskiy. While it has allowed Aleksandr “s1mple” Kostyliev to get back on the AWP, Perfecto hasn’t fit in perfectly just yet. That hole in their defenses could end up biting Na’Vi back.

FaZe Clan are one of the more hopeful underdogs at Katowice. Their star-studded roster has always had the potential for greatness, they’ve just never fully gelled together. Their recent domination of Team Liquid points them in the right direction. This FaZe team could make their presence truly felt in the coming weeks.

As for the rest of the field, keep an eye out for MAD Lions and Cloud9. These teams, formerly Tricked and ATK respectively, have been on regional upswings. They’ve both had success in taking maps off of the stronger teams in their regions, guaranteeing for some upset potential.

The Group Stage takes place from February 24th – 27th with each group competing in a double elimination bracket. Every match will be best-of-three. The winner of each bracket advances directly to semifinals. The runner-up advances to quarterfinals as the high seed, and the lower bracket winner advances as the low seed. The six team playoffs will be single elimination and play best-of-three until Grand Finals, which will be a best-of-five.