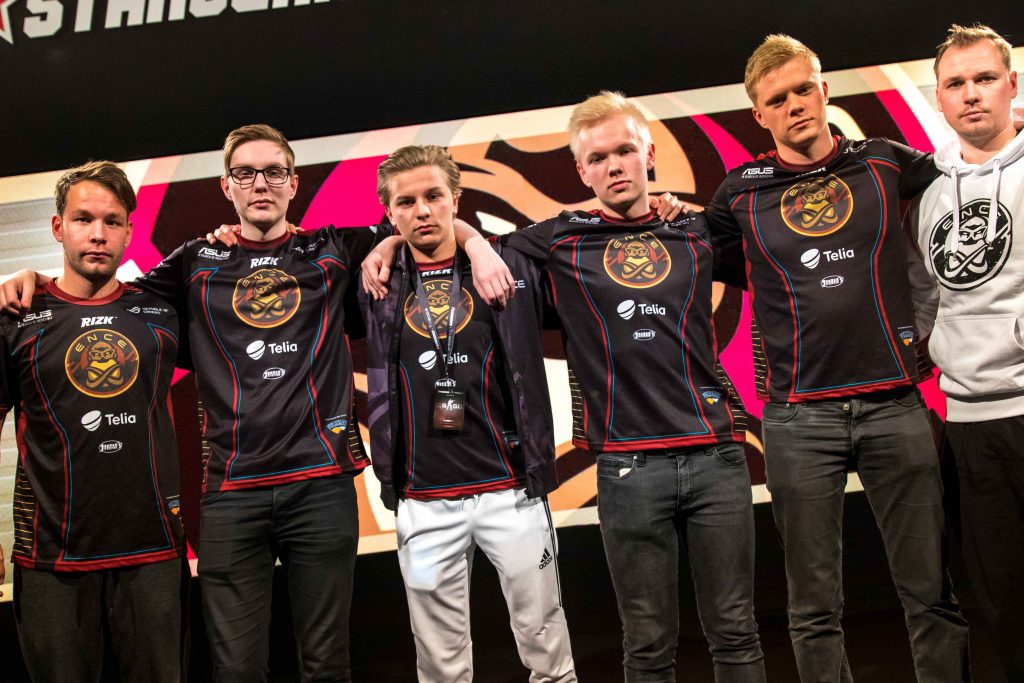 Finnish tacticians, ENCE, would take one step closer to their playoff dream in Katowice. (Image courtesy of Ence.gg)

The action continued at IEM Katowice today with a series of rigid Round 4 Low Matches, resulting in either elimination or departure from the tournament for those in contention. Many of the sets on the day would go down to the wire, offering a playoff lifeline to those emerging victorious and pitting them in a cutthroat fifth round tomorrow.

Living to See Another Day

Finnish tacticians, ENCE, would take one step closer to their playoff pipedream in Katowice and simultaneously shatter that of French Maestros, G2, in the same series. After a swift 3-1 record in the Challengers Stage, ENCE has seemed to have slipped up marginally in this critical stage of the tournament.

As a team boasting an inherent amount of aptitude, there’s been rightful projections for this squad to go deep in Katowice – though, today instilled the notion ENCE entered the tournament with. Their opening map on Dust II against G2 was a back-and-forth battle, testing the Finns in each possible way and stretching into an overtime scenario; in-game leader, Aleksi ‘Aleksib’ Virolainen, would shine brightly here, dropping 31 kills and many of which would help lead to pivotal round wins.

Aleksib would carry on his strong performance onto Map 2 on Mirage, this time sparking contributory efforts from the entire cast; Jani ‘Aerial’ Jussila topped the leaderboards on Mirage with six opening kills while the rest of the team held their ground. Their bout against G2 was an exemplary display of ENCE’s dynamic teamwork, arguably this team’s best quality.

ENCE lives to see another day in Katowice, tomorrow though, defining everything they have worked for up until this moment in Round 5 as they attempt to qualify for the Top 8 against AVANGAR.

Putting the Pressure On

The afternoon skirmish between FaZe Clan and Complexity was one likely to have awoken the entire Counter-Strike community. Headlines rang out like gunfire around Complexity beating FaZe on the opening map by doubling their scoreline, 16-8. Though Complexity had made history of their own last year during the FACEIT London Major by qualifying for the Top 8, their fantasy in Katowice would fall short to FaZe Clan’s experience and toughness.

Game 2 would take both sides to Mirage, setting a very somber tone for FaZe as they took their initial steps into the server. An aggressive T-side and watchful CT-side would help FaZe see through this map as they bypassed Complexity 16-11 and earn themselves some breathing room before heading to Dust II for the decider map.

Despite Complexity being able to keep the final map within arm’s reach for the duration of the match, FaZe would pull away in the final three rounds, securing themselves a 16-14 victory and a pass into the last round.

Stepping Out of the Shadows

Last year was a long and strenuous one for Cloud9, living in the shadows of their ELEAGUE Boston Major win with minimal signs of matching a comparable accolade. The start of the new year, however, has been good to the North American organization; first, their ELEAGUE Invitational Grand Final appearance and now, sustaining an impressive run at the Katowice Major.

In the last fixture of the day, Cloud9 would take on HellRaisers, a fiery side now even more threatening with the inclusion of recent Gambit transfer, Abay “Hobbit” Khasenov. Even Fabien “kioShiMa” Fiey admitted C9 has showed a mixture of strong and poor performances in Katowice – today though, they displayed their better half.

Game 1 brought each team to Inferno in what was a complete lockdown from Cloud9 – dismantling HellRaisers on the CT-side and swiftly closing the map out in the second half. Longtime C9 member, William ‘RUSH’ Wierzba, would flash his experience as both teams transitioned to Game 2 on Cache – boasting a dignified 1.72 rating at the end of the match and capturing the win that would propel them into the next round.