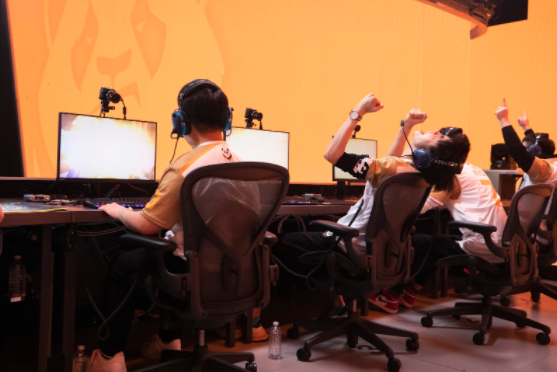 The Chengdu Hunters put the league on notice with their upset over Shanghai. (Photo Courtesy Robert Paul for Blizzard Entertainment)

Saturday might not have gone according to plan for the Guangzhou Charge and Chengdu Hunters, but they responded beautifully on Sunday, picking up big victories over their Pacific East rivals. In a complete reversal of fortune, Hangzhou and Shanghai suffered their first loss of the season, leaving all four Chinese franchises with 1-1 records after their first week of action.

How To Tame the Dragons

Whether you chalk it up to Chengdu’s unorthodox approach or simply too many mistakes from Shanghai, this was not the same Dragons team that swept the Charge on Saturday. They were out of sorts from the jump, with extremely scattered positioning on Nepal: Sanctum. Then on Shrine they threw away a lead by taking scrappy fights rather than building their ult economy for a decisive fight.

It was a trend that would continue throughout the series – Shanghai getting down in the mud with the Hunters and trying to match them at their own game. It didn’t work early on, and it didn’t work on Dorado where Shanghai tried to mimic Chengdu with a Pharah/Wrecking Ball setup. The Hunters seemed to know exactly how to deal with it at first, and eventually took over when they swapped to the mirror comp.

Throughout the series, the Dragons struggled to find openings for their star-studded DPS line. LIP, especially, after a brilliant debut on Saturday, couldn’t get anything going against the constant harassment from Ameng and Jinmu. His Widowmaker was a non-factor for the most part, and he was hesitant to switch to the Hanzo that was such a standout for him against Guangzhou.

On the other side, Chengdu was finding openings, in part because they were willing to force plays. Jinmu took over the game as Pharah, constantly flanking and finding angles to make the Dragons uncomfortable. He is never afraid to go for the in-you-face Rocket Barrage, and even when he inevitably dies mid-ult, Yveltal is always there immediately to dutifully Resurrect his partner in crime.

.@CYveltal just wanted to remind us that Mercy's Caduceus Blaster does a surprising amount of damage! 😇😇#LetsGoHunt #OWL2020

A big part of how this one played out was this week’s meta and the map pool. Without Lucio available, Shanghai rookie LeeJaeGon can’t play his best hero, and more importantly, rotating around the map becomes quite difficult. Shanghai struggled mightily to get through choke points, especially on Eichenwalde and Dorado, where Jinmu’s Pharah has plenty of cover in the sky. Without the Speedboost, Shanghai just couldn’t stand up to the pressure coming out from the Hunters.

This One Does Not Spark Joy

This series was an absolute mess, a barroom brawl between two drunk combatants. Gaungzhou came out on top, but it was a hectic match where the two teams traded baffling mistakes back and forth. There were two full holds and countless dumb decisions across the five map affair. In other words, it was a game of Chinese Overwatch.

From the beginning, this was a strange series. The Charge were able to take Oasis 2-0 in part due to a flukey win on University. Rio’s halt into the pit allowed Gaungzhou to take an early lead and despite losing the opening fight, the Charge got 35% on the board. That proved crucial as Hangzhou were unable to hold them off. Happy asserted himself on both McCree and Hanzo on the opening map, a good sign of things to come for Guangzhou.

Not to be outdone, GodsB answered back with a stellar Hanzo map on Dorado. The Charge couldn’t effectively get through the choke and were ultimately stopped short of the first checkpoint. The full hold was sealed by GodsB’s Dragonstrike that set up a kill on Cr0ng and denied his Gravitic Flux.

Guangzhou responded with a full hold of their own on Eichenwalde to put themselves on match point. Shu built two Transcendences during the hold, and Hangzhou failed to get much value out of their own ultimates.

With their backs against the wall, the Spark were rock solid on Hanamura. An excellent defense took the Charge all the way into overtime on their attack, before Hangzhou blazed through their own offense. They were aided in their efforts by some poor decisions from Guangzhou. Cr0ng mispositioned and lost his D.Va Mech essentially for free, and then Happy’s desperation flank was shut down by GodsB.

What a victory! The @GZCharge pull off an electrifying win in five maps! ⚡⚡⚡#ChargeForward #OWL2020 pic.twitter.com/2KBu6x8Unj

Nepal was the map where things finally got close. Hangzhou took an early lead relying on Wrecking Ball dive compositions to carry them to a win on Shrine. Rio answered with a Wrecking Ball of his own on Sanctum, and nero was too much to handle on Doomfist.

It all came down to Village, where Hangzhou again jumped out quickly, this time by parking their Reinhardt comp on the point immediately. It all started to fall apart for the Spark when they switched comps and tried to go back to Wrecking Ball. They completely reset their ult economy, and never got the chance to recover. They were routed in the next teamfight before Cr0ng’s Graviton Surge kept them off the point to end the round, for the second point in a row.

Overall, the Charge looked greatly improved on Sunday. Unlike their previous match, they were able to set Happy and nero up for success. They seemed much more comfortable playing the standard double shield comps that defined this series, and they were generally much more cohesive. Still, it was a sloppy series all around. Both teams are going to have a lot to critique about their performances, and they cannot be content.

That’s one week in the books for the Chinese squads, and no one has managed to assert themselves. All four teams wind up at 1-1 right now, and frankly, they all have some serious work ahead of them.

Shanghai probably had the highest highs this week. Their match against Guangzhou was a beatdown, and their individual talent looked unbeatable. On Sunday though, they were uncoordinated and extremely passive. If they truly want to be considered an elite team, those mistakes need to be cleaned up.

Hangzhou and Guangzhou both had their moments, but really have to tighten up their teamplay. The Charge have to work on positioning and rotations, and the Spark better fix their ultimate usage. They both spent much of their series handing the other advantages on a silver platter. Guangzhou especially has the mechanical skill to overcome mistakes, but it’s hard to rely on that.

The ultimate “winner” of this weekend has to be Chengdu. The Hunters debuted their new superstar DPS player, Leave, though Jinmu definitely outshined him in their win on Sunday. They nearly came away with an undefeated week and hold the best map differential among the Chinese teams. They’ve added some more variety to their playbook with strong Orisa comps, while still retaining their Wrecking Ball-centric identity. Now we’ll just have to see how they fare moving deeper into Hero Pools, but that win against Shanghai highlights just how scary they can be.