How Team Liquid Shocked Invictus Gaming and the World in Taipei 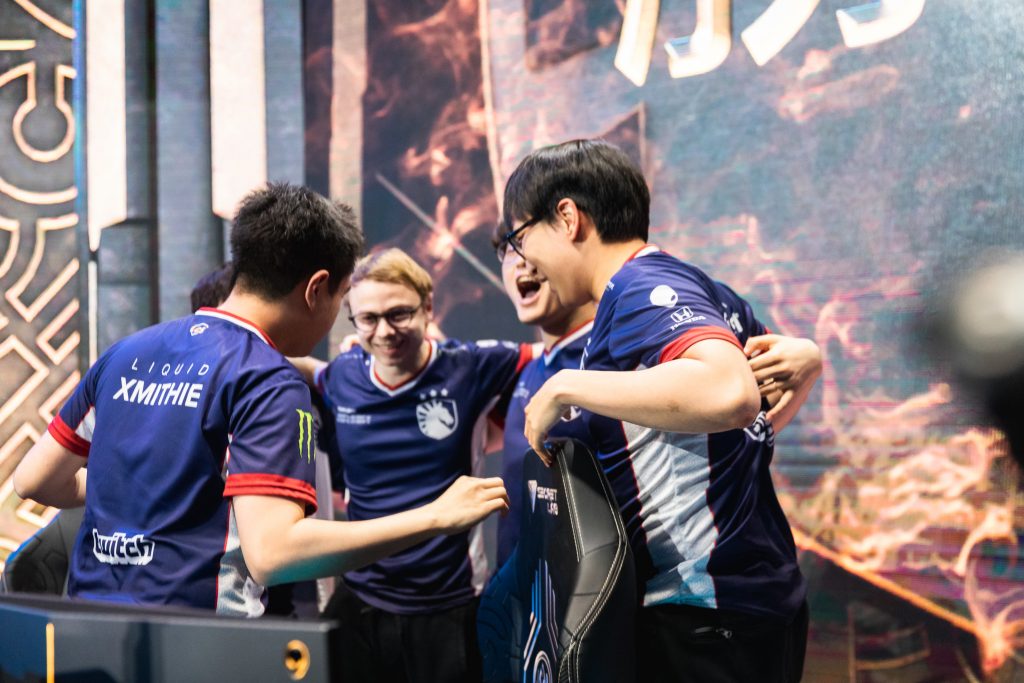 There were likely very few people at the stadium in Taipei that had any belief in Team Liquid as the North American side came up against world champions Invictus Gaming. Perhaps even less held faith that the fourth-seed roster at the Mid-Season Invitational could cause an upset in their semi-final clash.

When the Nexus exploded in the opening game, and Liquid moved to a 1-0 lead in the series, people still had doubt. Though, a 3-1 was a better result than 3-0. At least Invictus wouldn’t score a third humiliating sweep in a row against a Western team.

By the time Yong-in “CoreJJ” Jo delivered the final Galio-punch to the Chinese champions’ base to bring up the series-winning victory screen for Team Liquid, the whole world had realized this was a moment in League of Legends history. Perhaps one that had changed the face of international competition for at least the near future.

To fully understand how much a Mid-Season Invitational berth for Team Liquid, for North America, and for much-loved bot laner Yiliang “Doublelift” Peng means to LoL fans, we have to chart the path of NA representatives in recent years.

It’s hope that leads the Western fandom in international tournaments. While Eastern domination eventually sealed both stories in favor of Korea and China respectively, that these teams challenged the best reminded fans why they love the game.

Here’s the difference between those two miracle paths and Team Liquid’s: Invictus Gaming may have been the best team in the world heading into the MSI 2019 playoffs.

Legitimately the largest upset in League of Legends history?

Taking down the world champions who are currently 100% the same roster and unarguably the best team in the tournament.

When CLG lost 3-0 to SKT in the 2016 grand final, it was a sweep. They put a fight, but the best result they got was a 3-1 win over a Flash Wolves team that was on the slide from that moment on. CLG never beat the favorites, and while it was amazing for NA fans to see their representatives three game-wins away from the trophy, it never really was close.

The same for Cloud9. They made a miracle run out of groups off the back of a flailing Korean cohort, combining with pathfinders Team Vitality to show that the LCK could bleed. They beat the defending world champions out of groups, yes, but it was a weak version of the team that had lifted the Summoner’s Cup nearly a year before.

Cloud9 have long held the mantle of “North America’s last hopes” at international tournaments, qualifying as the lone NA team for the last three Worlds in a row. (Image via Riot Games)

Cloud9 have long held the mantle of “North America’s last hopes” at international tournaments, qualifying as the lone NA team for the last three Worlds in a row. Image via Riot Games.

Cloud9 went on to beat Afreeca Freecs 3-0 in an exhilarating and odds-defying series, but again this was a team with no major international experience. In a rapidly changing meta, Afreeca failed to adapt, and C9 obliterated them for it. They took advantage of a switch in play styles and snatched the upset from there.

C9 went on to stand on the wrong end of a lopsided 0-3 series against Fnatic, in a trio of games that dampened NA fans’ hopes again and reminded them LCK’s failures hadn’t put them at the top of the world pile. China took the crown and everything with it.

Outside of those two runs, North America’s international campaigns have been disappointing, if not downright atrocious, in terms of their pre-tournament hype compared to results.

Since CLG’s MSI dream run in 2016, Immortals, CLG, Team SoloMid (twice), 100 Thieves and Team Liquid were all sent tumbling out of Worlds with groups failure. C9 made it out of groups all three year-end tournaments, but one team does not a region make. The leading organization had that something special, and it was keeping North America’s hopes alive.

Now, Team Liquid have turned that smoldering kindle of international dreams into a raging inferno.

Chinese champions Invictus Gaming were well on their way to creating the next League of Legends dynasty after their world title in 2018. (Photo by Colin Young-Wolff/Riot Games)

Chinese champions Invictus Gaming were well on their way to creating the next League of Legends dynasty after their world title in 2018. Image via Riot Games.

Invictus Gaming were the LPL champions. The roster 3-0’d JD Gaming in the title fight, and punched their ticket to the Mid-Season Invitational in emphatic fashion. The same lineup had lost just two games in Worlds playoffs before cementing their championship, and with no moves in the offseason, they hadn’t lost any of their dangerous talent.

League of Legends pundits from around the world were beginning to ask the question of IG players – were they the best in the world? Was superstar mid laner Eui-jin “Rookie” Song better than SKT’s Sang-hyeok “Faker” Lee, and was Seung-lok “TheShy” Kang one of the greatest top laners to have ever played?

Rookie is the best mid in the world. I don't know how you can watch him play enough games and think otherwise.

This was an unstoppable juggernaut, fully in control of the current professional meta, and well on their way to establishing the next international dynasty. MSI’s only real storyline was a simple one – could anyone stop Invictus?

As it turns out, the scrappy American hopefuls could. They played against the indomitable titans with a world championship-winning roster, and they did it playing good League of Legends without a raft of cheese picks. They drafted meta, for the most part, they played macro and they toppled the Chinese giants.

Team Liquid looked to Jake “Xmithie” Puchero for much of their success in the opening two game victories. After a mediocre group stage from the squad’s jungler, he flicked a switch in the best-of-five series and took control.

A little worry crept into NA and Western fans as Rookie blow the series wide open on his signature LeBlanc pick, but in the end, it wasn’t enough for the Chinese champions.

Liquid locked in Skarner and Lux—out-of-left-field picks for the MSI meta, but not out of place in the NA wheelhouse—and finished one of LoL’s biggest-ever upsets in style. Liquid took the fight to the best fighting team in the world, and through a series of skirmishes and major team fights, NA’s champions shattered their early game problems, then took control late and wrote history with the blood of IG’s champions.

Team Liquid are a Roster of Losers

So how did they win?

Well, Team Liquid is full of losers. In a sense, most of the roster is used to defeats, losses and struggles. Doublelift has been ridiculed for years about his international choking, on TSM and Liquid especially. Up until this tournament, Doublelift had never made it out of groups at MSI or Worlds.

Mid laner Nicolaj “Jensen” Jensen was in a similar boat domestically. The former C9 star had become known as a grand final choker, cracking under the pressure when his team needed him most. Internationally he was stronger, but there was still no success to be found for the European import.

For CoreJJ and top laner Eon-yeong “Impact” Jung, the idea they weren’t at the peak of their careers anymore because they’d transferred to North America hung over their heads. They couldn’t play with the best anymore so they fled Korean shores. Even Xmithie had the title of “loser” or “choker” after falling in the LCS final with Immortals before being punted from Worlds groups in a tiebreak series against Fnatic.

Yiliang “Doublelift” Peng has long lived with the crushing pressure of being titled an ‘international choker’, after failure after failure at Worlds mounted up against the North American bot laner. Image via Riot Games.

Yiliang “Doublelift” Peng has faced the pressure of choking after failure at Worlds mounted up against the NA bot laner. (Image via Riot Games)

All of this loss on the international stage surely came with disappointment and sadness for the players. After losing multiple times, players begin to expect that they will struggle. They take on that underdog mentality.

It was certainly an underdog road that the side took to the final. Starting in the Play-Ins Knockouts because of NA’s poor international record, Team Liquid had to defeat home side Phong Vũ Buffalo in a best-of-five series to even qualify to the main stage. Once there, a near-abject performance in groups barely saw them make it to playoffs.

Their 4-6 groups record left them seeded fourth. As punishment for their group stage struggles, they were picked by first-seed Invictus Gaming and billed as the whipping boys for the Chinese powerhouse.

With all of that behind them, and with all their history of losing, and disappointing their regional fans, of course, Team Liquid were against a near-Herculean challenge.

As it turns out, they were up to the task, and 3-1’d the tournament favorites and the best team in the world. They booked themselves tickets to the decider for one of the most prestigious international tournaments in esports and gave themselves a shot at an even bigger slice of history—being the first North American roster to claim a Mid-Season Invitational title ever.

There's only one thing left to do. #TLWIN #LCSWIN pic.twitter.com/1XvMxI7QpJ