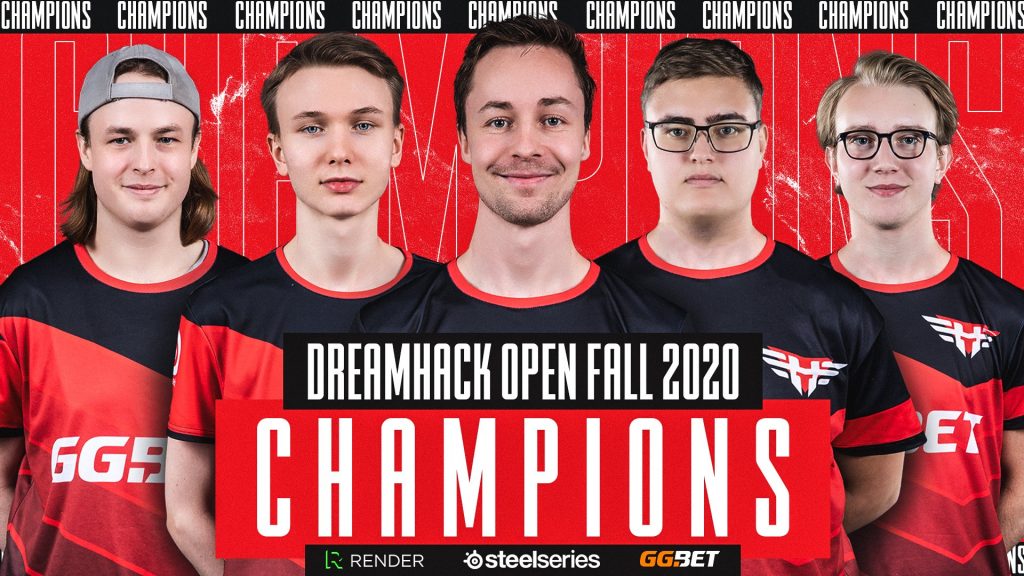 Europe’s final RMR event of 2020, DreamHack Open Fall, has crowned its champion. In a surprising turn of events, Heroic has completed their full losers’ bracket run and earned a massive 2500 RMR points, $33,000 of prize money, and a spot at the prestigious IEM Global Challenge in mid-December. Heroic was the only team in the top six who didn’t start on the winners’ side.

THEY DO IT! The Lower Bracket DREAM! @Heroicgg win #DHOpen Fall! 🏆🏆🏆

What a run, what a tournament, a superb performance! 🔥 pic.twitter.com/jxm6jroKTm

Started from the Bottom

As the second ranked team coming into DreamHack Fall Open, Heroic’s group stage performance left a lot to be desired. Their only win came against the group punching bag in Endpoint. Losses to Astralis and G2 Esports solidified them as the group’s third seed, forcing the ESL One Cologne champions to start from the lower bracket.

Heroic ran through North, Sprout, and BIG to secure their spot in the top four. However, they wouldn’t be content to stop there. Heroic faced off against Ninjas in Pyjamas in the lower bracket semifinals. Their opening Vertigo went phenomenally poorly for a practiced pick. The Danish side only managed to take four rounds off of NiP’s defense before losing their map 16-8.

Heroic’s resilience kicked in as they crushed NiP on their Train pick. An indomitable 14 round CT side led to a 16-3 stomp to force a final map. The match belonged to Heroic after yet another stalwart defense. A 16-11 result put them through to play Astralis yet again for a shot at the trophy.

A Danish derby on Nuke awaited them. Each squad played very well on their CT sides, earning equal 10-5 halves. It took two overtimes to separate them. In the end, Heroic came out on top of their map 22-20 thanks to a 40 bomb by Martin “stavn” Lund.

Astralis responded in kind with a rather quick game on Inferno. A nine round T half led into a strong hold on their part. The 16-8 score line guaranteed yet another full series for Heroic on the same day. It was back to Vertigo for the tiebreaker, but this time Heroic knew what to fix. They got twice as many T rounds as they did against NiP, taking an 8-7 lead at the half. Heroic then stalled Astralis out of the game on defense, securing a 16-11 finish and a spot in the grand finals against Vitality.

A Marathon of a Series

The highly anticipated matchup delivered on all fronts. The first two maps both found their ways into extra periods after some crazy comebacks out of Heroic. On Vitality’s Overpass, the French side got out to a hot start, taking nine rounds on their T side. That momentum continued into the second half as Vitality went up 14-7. It was Nikolaj “niko” Kristensen who led the way for Heroic to take eight of the last nine rounds in a row to force OT.

Unfortunately, Heroic was unable to rally behind him and take the map. Vitality narrowly escaped an embarrassing throw 19-17 to go up 1-0 in the series. Nuke started out similarly with Vitality earning a 9-6 first half lead. Heroic once again responded by keeping pace and taking the game to extra innings. Two overtimes were needed, but Heroic would hit the mark this time. Four of their players earned 30 kills in what was a true team effort to even up the series.

With the initial two maps out of the way, the next two followed a different pattern. Vitality started out Inferno looking incredibly strong on the T side. Mathieu “ZywOo” Herbaut put the team on his back and earned a 17-8 K-D ratio and 120.6 ADR in the first half. After a 9-6 start for the French side, the side swapped and the script flipped. With only one man playing up to par, Heroic had a field day running through the other four. A dominant 10-2 T side for Heroic resulted in a comfortable 16-11 victory and put them on championship point.

Much like how the second map mirrored the first, Vertigo was nearly identical to Inferno in terms of game flow. This time it was Heroic who rallied behind stavn’s 16-10 K-D and 105.3 ADR to take the 8-7 lead from T side. Vitality answered back with a flurry of fast rounds, never letting their opponents get set. They took the last nine rounds of the game all flawlessly, completing a 16-10 and forcing the final map.

Everything came down to Mirage. Vitality would find the opening pistol round win on their T side, giving them a much needed 3-0 start. Heroic’s first buys were successful, bringing the score back to even. The teams then went back and forth for five straight rounds fighting for economic control. It was Rene “TeSeS” Madsen who broke the game wide open by crushing Vitality with one of the best sprays you will ever see.

Heroic won every round left in the first half, taking a strong 10-5 lead. They then opened the second with a pistol round victory to extend their lead to eight. Vitality tried their best to stabilize but could do nothing against the immense pressure of Casper “cadiaN” Moller. CadiaN put up an insane 18-3 K-D in the first half before following it up by going 13-2 with 138.9 ADR on the attack. His gargantuan 31-5 performance earned him an HLTV rating of 2.08 for the last map. The most one-sided map of the series ended in a 16-7 for the Danish squad. Heroic were crowned champions of DreamHack Open Fall after their 19th map played in playoffs.

Heroic are back on top of the Counter-Strike world after this incredible run. They took down the three best teams Europe has to offer in BIG, Astralis, and Vitality while not losing a single series after the group stage. They also played the most CS:GO of any team at the tournament by far. Heroic’s feat of resilience and outstanding play will not soon be forgotten as they move into the number one spot following this event.