Heretics: “[We] Didn’t Prepare For [SUMN FC] Before” 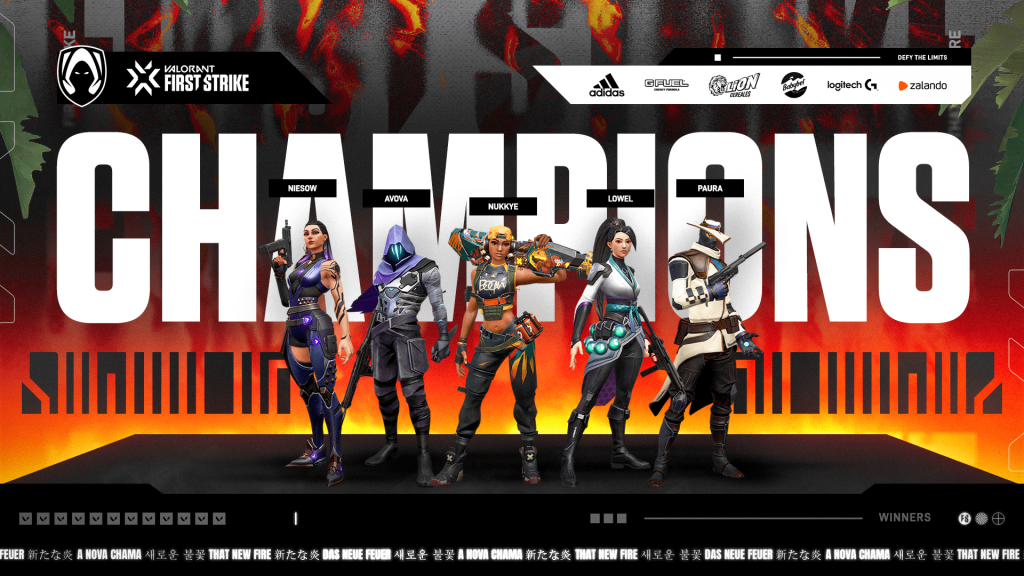 The Heretics defeated SUMN FC in a dominant 3-1 series during the Finals of the EU VALORANT First Strike tournament on Sunday. With the win in the final match, they became the first EU team to ever win an Riot sponsored VALORANT tournament. Heretics entered the tournament as the underdog, with most analysts expecting FPX or G2 to win. However, they proved much stronger than most people expected, and ended up defeating G2 and Team Liquid on their way through the bracket.

After defeating Team Liquid, G2, and Sumn, we are your EUROPEAN FIRST STRIKE CHAMPIONS!

This was just the start of a very special team. Gracias a todos por el apoyo 🧡#VamosHeretics pic.twitter.com/exjNtuXs0P

We had the chance to speak to five of the Heretics players after the match, including IGL Christian “loWel” Garcia Antoran,  Head Coach Tanishq “Tanizhq” Sabharwal, Žygimantas “nukkye” Chmieliauskas, Dustyn “niesoW” Durnas, and Auni “AvovA” Chahade. We asked them about the significance of this win, how it happened, and what they are taking away from this tournament heading into what will, presumably, be a bright competitive VALORANT career ahead of them.

Hotspawn: So Heretics, you beat Team Liquid, G2, and today you brought home the First Strike championship match against SUMN FC. What is the significance of winning the first official Riot sponsored VALORANT tournament to you?

Lowel: It feels amazing for the team, you know? In my opinion, we wanted to play in this tournament to build experience and build synergy between us. We knew that without that we could beat every team, you know? We knew it was going to be really hard to beat them, but we knew we could beat any team, and we had the chance to prove it. So I think it feels amazing for me and my teammates. I am super happy!

Tanizhq: Our route to actually winning was also impressive. We had to beat G2, Liquid, and then win the finals. I think FPX was considered the best, but the difference between FPX, Team Liquid, and G2 is very small.

Hotspawn: What were your expectations of SUMN coming into this series, and did they surprise you at all with any of their strategies?

Lowel: Didn’t prep them before. I think we played them a really long time ago, maybe. Icebox we lost, because we only played once in three weeks I believe. I was at the start asking everyone, “hey, where I am going”.

Hotspawn: Avova, You played Viper on Icebox, but it was revealed in the post game interview that you don’t play much Viper. What was it like playing an agent you aren’t as knowledgeable on during a match with such high stakes?

Avova: Yeah we only played it once, three weeks ago, so we were not going to win on that map. Plus that was my first time playing Viper! Honestly, I asked my friend if he plays Viper on Icebox, and I asked him to show me some stuff, and that was all my preparation I guess. I didn’t want to play Omen, because he is definitely not as good as Viper on that map, even though we didn’t win in the end.

Everyone is on a level playing field here.

Hotspawn: You pushed be several rounds in a row on the final map on Bind, was that an adaptation to SUMN’s strategies?

Nukkye: Oh yes, that was also kind of an adaptation. We went A a few times, but their Viper and Sova kept shutting us down. So we just decided we can just go take B instead. They are playing p retake safe, but the places they are playing in the middle of the site weren’t that useful for them. So we could just easily force into the site and win a few after plants if we were lucky, so I guess B just ended up being the easiest option to hit.

Hotspawn: The most common comment from teams who have struggled in this tournament, was that their mental game was off. How does Heretics handle stress and nerves during that very intense Grand Final, especially the final map?

Avova: I don’t know, I think it’s just how I am as a person. I am pretty chill, pretty calm, I guess that helps me in these high stakes games.

Tanizhq: I don’t think we came into this tournament feeling like “Oh this person has so much experience in CS:GO, we should be afraid of them here.” Today, everyone is on a level playing field here.

Nukkye: I guess, I just have no fear against people. That’s the best thing to do if you want to win, it calms the nerves.

Hotspawn: SUMN FC mentioned in their interview that they have a sports psychologist working with them, did you also invest in some sort of mental coaching before this weekend?

Tanizhq: Yes, we got someone working with us in the past few weeks, and it’s been really helpful to keep us calm in these high stakes matches. He has been helping us work on our mentality during games and our communication, it’s been a godsend really.

Hotspawn: You came out strong and took that first map pretty convincingly. How important was that dominant first map to the momentum of the rest of the series?

Lowel: Yes, winning that map was really important because it was the first map, and it was our pick. What I said to my teammates, and they did really insanely good, I said if we can do 13-0 we do it. I think we win because of that, because of intensity and our attitude all the time.

Nukkye: In that first map, we set the pace. Showing that we can dominate them, and then we just proved it. Icebox was a small buggy map, and then everything else was dominating and controlling them. We played well on Haven and Split, but then just a few mistakes on Bind before we closed it out at the end.

Hotspawn: After that tactical timeout going into round 23 on map 4, you managed to stall SUMN’s comeback, what did you talk about during that timeout and what changes did you make?

Tanizhq: We used that when it was 11-11. The guys just paused, called a strat, took a moment to breath, and then we just went for it. We won that next round, and then there was the technical timeout leading into the last round.

Hotspawn: What were some of Heretics’ favorite moment’s in this match?

Nukkye: For me, it was Lowell on Haven. He had so many clutch plays on Haven, it was just crazy. All those rounds were super important too.

Niesow: Yeah, I also would say Lowell’s performance on Haven.

Avova: Mine was when Lowell and Nukkye on Bind. They won against 4 or 5 on Bind, during one round. They killed Me, Niesow, and pAura on long in a split second. We were like “fuuuck”, then all of the sudden Lowell popped off and killed everyone, it was amazing.

Hotspawn: What’s the biggest take away for Team Heretics this tournament going forward?

Nukkye: Going forward, I guess we just take our experience and put it to use. We gathered some confidence, so everything we play now will be a little less nerve racking now, see the mistakes we made, which is also an eye opener. We can only learn from this. We didn’t play all our games completely clean, so we can learn a lot from those.

Lowell: I want to say that I am really proud of my team. We didn’t have the experience that everyone else did coming into this tournament, but that didn’t matter, everyone was still insane. Everyone was helping each other in both good moments and bad moments. We played so well and there was no one tilting and we never give up. That is the main main key to us winning this tournament: Attitude. So I am just super proud of everyone.