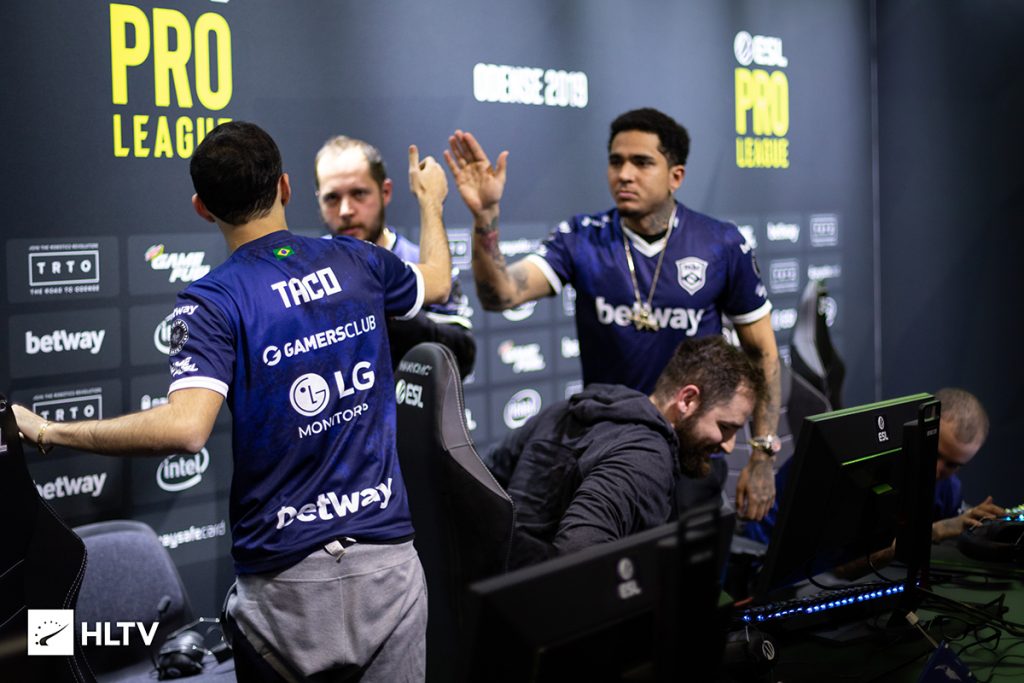 MiBR have won their group twice in a row, guaranteeing a top two seed at Flashpoint Playoffs (Photo via HLTV)

The Flashpoint Phase 2 Finals have concluded. All three matches ended in 2-0 score lines, but some maps were incredibly competitive. In the end, HAVU, MAD Lions, and MiBR have come out on top of their respective groups and earned the prize of 75 circuit points going into playoffs.

For the second-straight bracket, HAVU made it to the grand finals. This time, they hoped to take the win over Cloud9. The first map was C9’s Vertigo pick. HAVU started off with a CT side pistol win. However, C9’s Deagle force buy was too much for HAVU’s defense to handle. C9 won the round and the next two as well while HAVU waited for money. The first gun round also went C9’s way after an A site attack. Down 1-4, HAVU bought pistols and armor and traded evenly in Mid. Olli “sLowi” Pitkänen then pulled off a 1v2 clutch to retake the B bombsite and give HAVU their second point.

The next four rounds were traded evenly as the teams jockeyed for economic superiority. In the end, HAVU broke C9 with strongholds based around saving utility until late in the rounds. With the score tied at six apiece, C9 went back to the A site and won the fight despite losing the first man. HAVU then pulled off an aggressive Ramp hold and stopped C9 in their tracks. The final round also went in their favor, earning an 8-7 lead at the half for HAVU.

The second pistol went the way of C9’s CT side, but HAVU also had a strong second round force buy up their sleeve. HAVU shredded C9’s weak buys on the A site in three rounds in a row to hit double digits. HAVU also showed prowess on the B site, taking it over multiple times as well. Their six-round win streak put HAVU on a 14-8 lead. C9 needed a complete 180 if they hoped to take their own map.

The first step was a change in mindset. Round 23 saw C9 push Ramp early and stop HAVU before they could get started. C9 started to take more aggressive peeks and fights. HAVU tried rushing through C9’s utility, but they couldn’t find the shots they needed. Cloud9 hit match point first after their seventh straight round win, but HAVU weren’t finished yet. One A site push with good trading was all they needed to force overtime.

Despite their T side troubles in the second half, HAVU looked revitalized in OT. They found entry frags on A in all three rounds. HAVU transitioned those into a dominant 3-0 start. One good Mid hold for HAVU later, they closed out map one 19-15.

Map two was much less interesting. HAVU’s pick of Mirage proved too much for C9 to handle very early. The pistol round came down to a 5v5 retake on A which HAVU took with one man left. C9’s force buy got ran over in connector, then Lasse “ZOREE” Uronen aced the full save.

HAVU pulled out to a 5-0 lead before C9 finally got three rounds in return off of successful retakes. Every round came down to the wire so C9’s economy was shot. All it took was one Mid to B split to set HAVU on another massive streak. C9 did earn two more rounds in the half, but HAVU still ended with a 10-5 lead on T side.

HAVU’s CT pistol was clean, not losing a single man on the B defense. Even though they didn’t get a bomb plant, C9 opted to force buy. Joonas “doto” Forss earned a triple kill on the A hold, breaking C9 and brining HAVU to 13 rounds. HAVU had the perfect answers to C9’s slow T strategies. After giving up match point, C9 tried a fast A play. Even though they got the entries, they couldn’t hold off the retake. HAVU finished the map 16-5, completing the 2-0.

In what was the biggest mismatch of the group finals, MAD Lions easily dispelled FunPlus Phoenix in two maps. FPX chose Dust2, hoping their aim could make up for a potential lack of tactical depth. Starting on T side, MAD Lions took the pistol and the two ensuing economy rounds. FPX barely won the first gun round milliseconds before the bomb exploded thanks to a 2K from Michael “dapr” Gulino. MAD Lions then went right back to A and succeeded this time.

The Lions continued to abuse FPX across the map, taking round after round. Even when the North American squad found the odd point, MAD Lions hit back harder instantly. They used every part of the map to keep FPX guessing. In the end, MAD Lions took an oppressive 12-3 half time lead.

FPX did get off to a good second half start. They took the second pistol and pushed past MAD Lions’ force buys. However, when it came to the gun rounds, FPX once again looked hopeless. Their first call was a B rush which ended in disaster. FPX’s next round saw them storm the A site. After the plant, MAD Lions collapsed on them from Long and Catwalk to secure the retake. Their third attempt was yet another B site attack which was thwarted by a late Tunnel smoke grenade. MAD Lions completed the four-round streak by shutting down a low buy to finish the map 16-6.

Nuke started out looking just as hopeless for FPX. Even though they got to chose the favored CT side, MAD Lions came out of the gate with a strong pistol round and anti-eco push which focused Ramp. The third round looked promising for FPX, but Rasmus “sjuush” Beck earned a 1v3 clutch on the B site to keep MAD Lions in control. The Danish squad seemed to know where FPX were at all times. They perfectly cleared angles and traded together, securing countless entries. FPX finally took their first rounds after going down 0-7.

Still, the MAD Lions wallets were too stacked. Even with FPX taking three rounds, the Lions could just rebuy and pile the pressure on endlessly. FPX’s defense cracked once again at the end the half. MAD Lions played spread out and won all of their duels, taking three more rounds in the process. The half ended 12-3 once again.

MAD Lions also won the second pistol round. After a full save from FPX, the Lions were on 14 rounds. The main difference from last map was that FPX actually put up a fight at some point. They managed to abuse MAD Lions Outside, repeatedly finding frags and plants on the B site. FPX streaked up to 10 rounds before Asger “AchilloN” Grunnet Larsen said enough was enough.

The close-out came one round later as MAD Lions finished the inevitable win 16-10.

The final match of the day pinned MiBR against Gen.G. This matchup was the closest one on paper, so a close game was expected. Gen.G started it off with Dust2. MiBR came out on top of the pistol round, leaving Gen.G to full save. They bought up in round three and tried to push through Long. It didn’t go well, but Gen.G rotated out to B and won a 2v3 to take the round. MiBR’s force buy couldn’t defend the A site and Gen.G took a 4-2 lead off the economy. The Brazilians then responded with a streak of their own. After a clean retake of the A site, Epitácio “TACO” de Melo led the defense on B to put MiBR in the lead.

After losing six rounds in a row, Gen.G responded with three to close the half only down 7-8. The North Americans had a fighting chance if they could stabilize their upcoming defense.

That prospect immediately went out the window as MiBR took the T side pistol and cleaned up the Gen.G force buys. Gen.G’s first gun round came in the fourth of the half. They earned a one-man advantage in the Long Doors, but couldn’t stop the MiBR Mid to B push. Gen.G’s next chance at a round also ended in failure, this time after finding two opening frags. Once again, MiBR’s Mid to B was too powerful. With full economic control, MiBR completed a 9-0 T half to win map one 16-7.

Mirage was a much more back and forth affair. No team was able to put up a streak of more than three rounds throughout the map. MiBR had the early 2-0 T side start, but Gen.G fought back with multiple defenses focused on heavy Mid control. The score was 6-3 for Gen.G, then MiBR found a consistent weakness to exploit. Because Gen.G were so intent on holding Mid, they were weak to fast direct attacks onto both bombsites. MiBR took four of the final six rounds after forcing Gen.G to play more passively. The score at the half was 8-7 for Gen.G.

The second half was very similar to the first. MiBR took the first two rounds before Gen.G pulled together an early streak, this time on T side. Gen.G were playing in Mid while MiBR opted to play sites. MiBR had their own small streak to even the score at 13 apiece. Gen.G took match point off of a Mid and A Ramp split and an eco-round. The North Americans needed just one more, but MiBR responded with even more aggressive bomb site play to force overtime.

Gen.G tried some standard site executes in OT, but MiBR was ready for it all. The Brazilian CT side went flawlessly and only needed one round to end the series. It came immediately as MiBR split the A site to end the game 19-15 and complete the 2-0.

With the end of Flashpoint’s Group Stage, four of the twelve teams have been eliminated. The remaining eight will face off in a double-elimination playoff bracket beginning April 9. HAVU, MAD Lions, and MiBR have earned the top three seeds. They are all looking to be above the rest of the field, but anything could happen in playoffs.