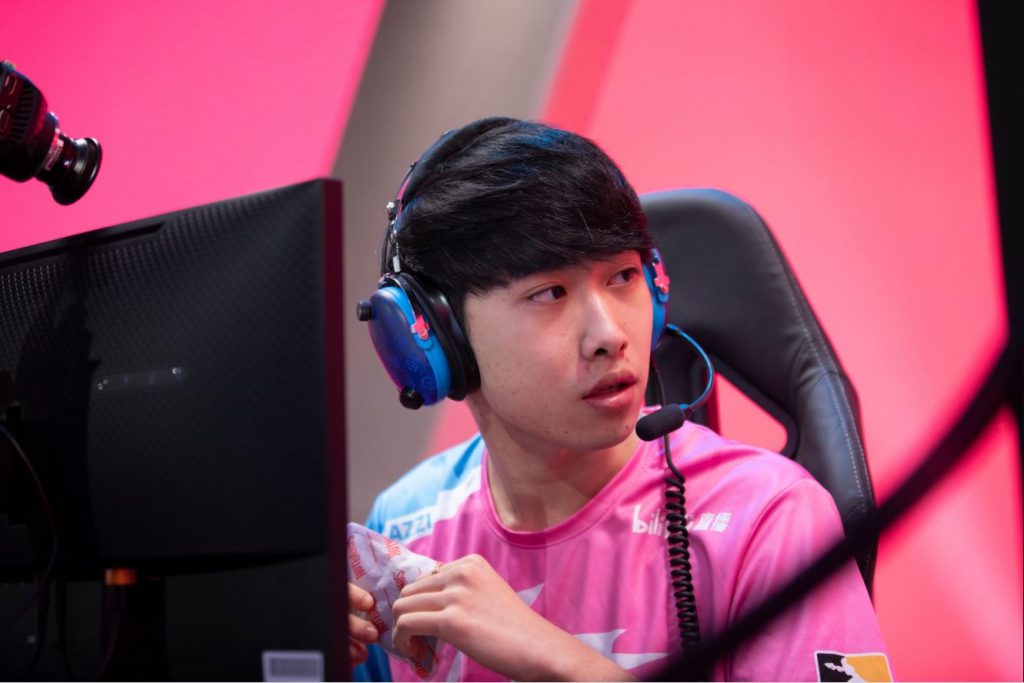 The Spark clawed their way to victory with Bazzi leading the way on Sombra. (Photo Courtesy Robert Paul for Blizzard Entertainment)

It was a week of firsts in the Asian division of the Overwatch League. The first 2-0 and 0-2 weeks of the year, by Shanghai and Chengdu respectively. The first rematches between Chinese franchises. The first matches in the region featuring Sombra, a favorite pick amongst the teams based in Korea and China.

Sombra was nearly omnipresent this week, seeing play on every single map across the four Chinese matches. She was such a staple this week across the league, that she was the second most played DPS hero across the last two weeks despite being banned in week eight. She’ll be gone again next week, but week nine belonged to Sombra.

Sombra, Reaper, https://t.co/BtRwEj5E65, and Ana are taking some personal time 👋

How do you think their absence will impact competition? 👇 pic.twitter.com/F3ypaLwBjs

Sombra was more than just a consistent nuisance this week. She was the most important hero in every single match. Hack timings and big EMPs decided fight after fight, and the team with the better Sombra usually won.

Dragons Bite Back Against Chengdu

Last week, the Hunters dealt an early blow against the prohibitive favorite in the region with their 3-0 upset of Shanghai. This time around, however, they couldn’t quite conjure the same magic. Part of that was improved team play and a better gameplan from the Dragons. The other part was the lack of Wrecking Ball this week.

With their favorite hero locked away in week nine, the Hunters looked far more conventional than fans are used to. They tried as best they could to mirror the Sombra Deathball comp that Shanghai was running exclusively, but they simply couldn’t match the Dragons.

That’s not to say the Hunters played entirely by the book – that’s just not their style. They repeatedly broke out a double shield bunker comp centered around Torbjorn. Designed to control space and take advantage of the lack of range from Shanghai’s Sombra/Reaper DPS duo, the defensive setup proved hard to crack on Volskaya. It helped net Chengdu their only map win against the Dragons.

Still, it would not be enough, as Shanghai controlled the rest of the series with relative ease. They played smart but aggressive Overwatch, operating around LIP’s spectacular Sombra and allowing Ameng to make mistakes on Reinhardt. Ultimately it was a recipe for success as the Dragons secured the win and the early lead in the clubhouse among the Chinese franchises.

Some new challengers will enter the fray next week, but for now, Shanghai are the top dog in the region. They looked untouchable on Sombra comps, with LIP farming EMPs faster than should really be possible and excellent follow-through on his hacked targets. If Sombra continues to be a high priority pick, then Shanghai will have to feel good about their chances moving forward.

Guangzhou Can’t Hang On vs Hangzhou

This was a series that felt very reminiscent of 2019. It was two talented teams going at it with a mutual understanding of the best meta composition. Like GOATs last season (especially the Sombra variety that came in vogue in Stage 3), the composition centered around key cooldown usage and precise positioning in teamfights. The series played out on a razor’s edge, where one missed Zarya barrier or well-timed hack could mean the difference.

Neither team was ever really able to gain an edge throughout the series. They also didn’t play much defense. Both squads were able to methodically march through their attack rounds, but stops were hard to come by. That means when they did happen, like the Charge’s two full-holds in extra rounds on Volskaya and Rialto, they completely decided maps.

Hangzhou was able to take Map 1 thanks to some excellent Zarya play from Sasin and textbook ult management. After falling behind 2-1 they answered back on Eichenwalde with a good defense of Eichenwalde to give themselves a shot. Guangzhou couldn’t make a stand and left the cart in crunch time as the Spark forced a fifth and final map.

On Nepal, Hangzhou dominated Sanctum to put themselves on match point, but the Charge wouldn’t go down without a fight. Cr0ng helped Guangzhou ramp up the suspense with a stellar performance on Village.

The final point was was pretty much perfect from the Spark. They got the first capture when Bebe just barely beat Shu to Coalescence, taking out his counterpart and clearing the way for Hangzhou. The Spark played patiently and forced resources out of the Charge, knowing they had the advantage. A flubbed EMP from Eileen was enough for the Spark to smell blood, and they went for the kill. Bazzi showed Eileen how it’s done just seconds later with an EMP that ended the series in a heartbeat.

Throughout the match, it was Bazzi on Sombra who made the biggest difference for the Spark. He was brilliant on both Control maps and especially shut down Eileen, twice stopping big EMPs from the Charge with his own. On Eichenwalde, from within a Graviton surge, Bazzi found the hack on Eileen to delay the Charge EMP just long enough to save his team. Overall it was the best Hangzhou has looked all season, netting themselves a big win to keep from falling behind in the region.

Next week will provide a number of exciting storylines to keep an eye on. First off, the Vancouver Titans will make their debut in the Asian region. In their first action since Week 1 in Dallas, they face off against the Charge and Hunters, two teams that really pushed Vancouver last season.

Speaking of Guangzhou, they’ll get their shot at revenge against the Dragons on Sunday. Last time was a Shanghai stomp, but the Charge looked much more polished this week. Still, that’s a daunting two matches ahead of them.

Turning toward North America, the Fusion have an excellent slate of matches, taking on the Eternal and Reign. That’s two of their top rivals in the Atlantic Conference and a chance to avenge their only loss of the season to Paris.

There’s one last revenge game to round out the week as the Shock look to bounce back against the Gladiators. They already took the rematch against the Valiant this week, so now it’s time to test themselves against the other LA team.