What is Call of Duty? 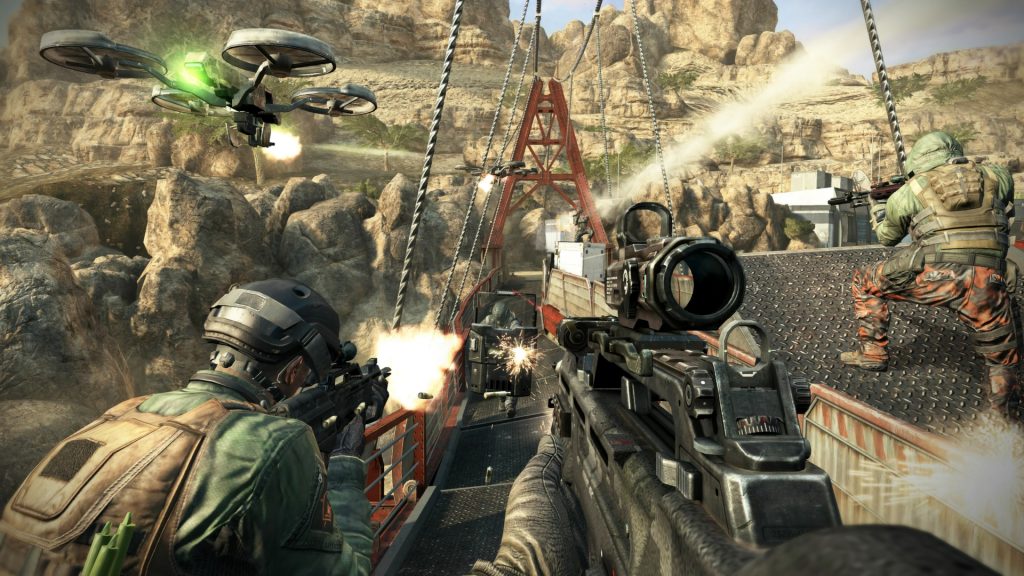 Call of Duty has been the best selling game in the region for nine years straight.

Call of Duty or CoD is the highest grossing game franchise in North America. The game has been the best selling game in the region for nine years straight after the success of CoD: WWII last year. With the first game being released in 2003, the Call of Duty series has released a new game every year since, except for 2004.

The series has managed the consistent high-quality releases by using a unique structure that rotates the game between developers each year. Infinity Ward released the first two titles in 2003 and 2005 before Treyarch took the title in 2006. The two developers alternated titles until 2011 when Infinity Ward co-developed CoD: Modern Warfare 3 with Sledgehammer Games. Since then the three developers have alternated every year with the most recent full release of WW:II being led by Sledgehammer. Currently, in Beta, Black Ops 4 is the latest Treyarch game. The developer has been committed to the Black Ops series since 2010.

With 17 games being released since 2003, the Call of Duty franchise is the most consistent game release besides the sports simulations (Fifa, NBA 2K, Madden, etc.).

Why is Call of Duty So Popular?

There are a couple reasons CoD has stayed so dominant over the years. First and foremost is adaptation. Unlike the sports simulations, the game feels fresh and different each year. By rotating developers, there are natural changes in gameplay and modes.

One of those modes is “Zombies,” which has helped carry CoD’s popularity over the years. Even when online play has gotten stale, there will always be infinite hordes of undead Nazis to kill. Zombies have been in every Treyarch game starting with Call of Duty: World at War.

This year CoD hopped on the Battle Royale trend and introduced the “Blackout” game mode. The versatility to adopt the latest flavor of the month has kept Call of Duty a dominant game every year.

Previously a key part of each Call of Duty title was the campaign. The single-player story mode has created some of the iconic moments of the series and was often people’s first introduction to the game. As time went on, the campaign began to take a backseat to online matches and Black Ops 4 will be the first title to forgo the campaign entirely.

In addition, CoD is easy to pick up. Unlike more strategic FPS titles like CS:GO and Battlefield, CoD doesn’t punish dying nearly as much. That, plus the variety of offline game modes like campaign and zombies, has made the game accessible to the casual fan.

How do you play Call of Duty?

Unlike the fellow FPS games above, consoles are the preferred platform for Call of Duty players, as opposed to PCs. Obviously aiming is much improved by mouse and keyboard controls, but CoD has found a differentiating point by focusing the game around the Xbox and PlayStation communities. While Call of Duty is still available on PC, the pro scene still uses controllers, a nod to where the game’s popularity was built.

Generally, the strategy in Call of Duty differs a bit from other shooters. With a wide variety of modes, strategies have to adapt consistently. Here are some of the main modes the game has favored over the years:

Team Deathmatch – Simply shoot the other team more than you are shot. This is the mode most people associate with the game. Team Deathmatch rewards smart positioning and aggressive play. Dying is fine, so long as you bring a couple opponents with you.

Search and Destroy – Similar to CS:GO, Search and Destroy uses rounds and players are not revived. To succeed in this mode you have to focus on patience and map knowledge. The goal is to either plant or defend a bombsite, and high-level games often come with strategic trades. This mode is usually a favorite for CoD esports fans because of the natural drama of each kill.

Capture the Flag – My personal favorite, CTF is just the classic PE game, but with guns. Teamwork wins out in this mode. Coordinated attacks are necessary to get into enemy territory and bring the flag back to your side, especially because the flag carrier can no longer use their weapon. That means their teammates need to have their backs.

How is Competitive Call of Duty Structured?

The esports scene for Call of Duty has been around forever. While community tournaments were around for the first couple of titles, the esports scene really began alongside Modern Warfare. The fourth title in the series is also one of the most beloved, and tournaments continue for the game to this day. Back in 2007, this title emerged as a rival for Halo, which was experiencing its heyday at the time. Modern Warfare was also the last COD title to be played competitively on PC.

From that point, Call of Duty esports began to expand. It was a feature event at MLG National Championships and Dreamhacks from 2008 to 2011 when the first major developer sponsored tournament was held.

Call of Duty XP in 2011 shook the esports world. With a prize pool of one million dollars, it was the second esports event to top seven digits. The first was Dota2’s The International, which happened just a month before.  Optic Gaming won that tournament and Nadeshot used that win to catapult himself to his esports fame and the eventual founding of 100 Thieves.

After that year, the event became the Call of Duty Championship and the prize pool held steady at $1 million a year. Through the years a major tournament circuit was established with many of the same teams competing in MLG events, ESL and the Championship.

Eventually, Activision Blizzard decided they wanted to take that whole circuit in-house, and the Call of Duty World League (CWL) was born. 2016 was the first year of the CWL and was dominated by Optic Gaming and Team EnVyUs as the two teams won all five events in Black Ops III. Since then, the circuit has expanded. There were 13 CWL sponsored events in 2017 and will be nine more in 2018.

Looking to the future, there have been reports that the CWL will move towards a regional franchising system, much like Blizzard’s OWL. A timetable for that hasn’t been announced but it will be interesting to see if esports organizations begin staking claims to individual cities in multiple leagues, or if they spread out their focuses.

Who are the Best Call of Duty Teams?

There is a lot of roster turnover in Call of Duty and players rarely stay at the same organization for long. Still, some of the same teams have proved themselves over and over at the highest stage. In doing a deep-dive on the history of competitive Call of Duty, it was clear two teams rose above the rest.

There’s a reason “what time does Optic play?” has become a meme in the Call of Duty community. The Green Wave has built up one of the most rabid fan bases in esports through community events, player content and, of course, CoD dominance.

While Optic was originally formed as a sniper group for CoD, the competitive team turned heads with a win at Call of Duty XP back in 2011. Since then, the team has won more individual Call of Duty events than any other organization. From 2015 to 2017, the team won more tournaments than they lost.

In the last year, the team has struggled a bit. WW:II was their least successful title to date. Currently, in the midst of rostermania – the annual free agency period – the community is expecting big names to join Optic in preparation for Black Ops 4. Players have already been confirmed as leaving the organization, but the replacements have yet to be announced.

Envy was founded as a Call of Duty organization back in the Modern Warfare 2 era of 2007. Since then, the organization has been one of the most consistent presences at the largest tournaments. After finishing second at the 2009 MLG Online National Championship, Envy secured its first massive win at the 2010 event. Envy has been remarkably consistent in reaching title games but has more often been the runner-up than the winner.

In 2017, Envy finished as runner-up again, meaning they have been to the title game in the largest annual COD event seven out of the last 10 years. 2018 was not one of those years, so during the 2018 offseason, Envy went out and acquired the full roster from Evil Geniuses, the current defending champions.

Who are the Best Call of Duty Players?

The games long competitive history makes this a tough question to answer. Many players enjoyed runs of dominance but here are three of the undisputed best players in the world.

The highest earner in Call of Duty and the only three-time world champion, Karma is widely considered the best player in the game. He won the title for three different organizations – Fariko. Impact in 2013, CompLexity in 2014 and Optic Gaming in 2017.

That’s what made it so surprising when Optic benched him during the 2018 CWL season. That led to a slew of rumors about Karma’s future with the club but nothing has been settled yet. Whatever team signs him will instantly become a fan favorite.

JKap has jumped around a decent amount during his career, but wherever he has gone, success has followed. He was a key member of Optic Gaming’s run in 2011 but he didn’t compete in the championship that year, if he had, he may have joined Karma as the only other three-time world champion.

After Optic, he went to Denial Esports where he won the 2015 Call of Duty Championship. After that, he moved to Team Envy and was a key reason they were highlighted in the group above. He was on the team for the 2013 second place finish, the 2016 championship and the 2017 second place finish. In the last year, he has competed for Luminosity Gaming, the fourth major organization of his career. He is currently the third highest earner by prize pool for Call of Duty pros.

Crimsix has been a crucial part of Optic Gaming’s continued success. While the roster around him has changed, Crimsix has been on the team since 2014, an eternity in competitive Call of Duty.

He’s also a two-time world champion and the second highest earner in CoD esports from prize pools. When looking at his tournament results, his teams have finished first with amazing consistency and he was a key member of CompLexity Gaming’s dominant run in 2013 before he joined Optic.

Call of Duty
Share
Mitch comes from a background in sports broadcasting at the University of Oregon, while there he competed for the U of O Hearthstone team and saw the potential for content at the crossover of sports and esports. In addition to Hotspawn, Mitch writes for SportTechie and the National Football Post. Follow him on Twitter @Mitch_Reames.
Follow me