The History of League Of Legends Worlds 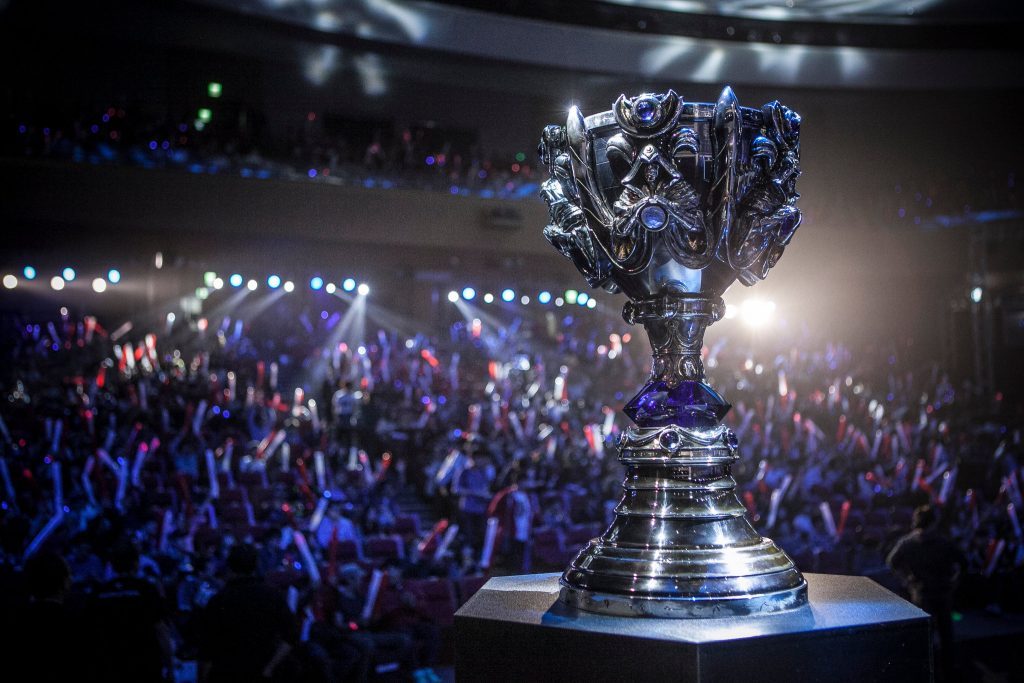 The biggest League of Legends tournament has a rich and interesting history. (Photo courtesy Riot Games)

In October of 2019, League of Legends celebrated its Ten Year Anniversary during the Season 9 World Championships. Ever since 2011, the best teams around the world meet annually to determine who will raise the Summoners’ Cup. The journey is long and arduous, but in League of Legends, there is no greater honor than winning Worlds.

Nearly a decade of champions have been crowned, each one having their own story. With that said, this is the history of League of Legends World Champions. 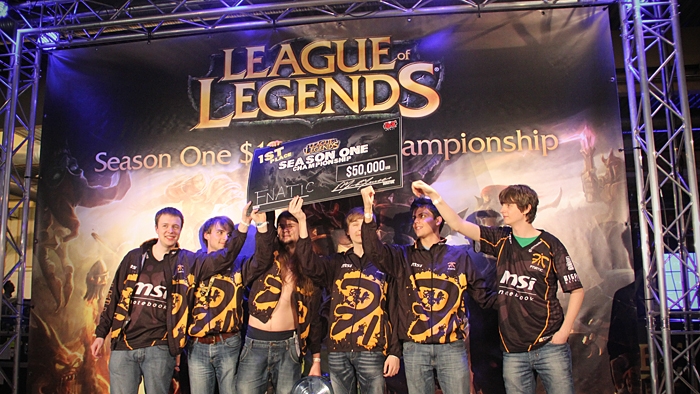 League of Legends esports was still in its infancy in Season One. No infrastructure had really been established, and no meta had been defined. As such, Riot Games decided to hold the Season One World Championships at DreamHack Summer 2011 in Jönköping, Sweden.

Eight teams played through regional qualifiers to get there, three from North America, three from Europe, one from Singapore, and one from The Philippines. After barely scraping through the Group Stage with a 1-2 record, Fnatic were a long shot for the trophy. However, they were able to dispel Counter Logic Gaming 2-1, then sweep Epik Gamer. Against Team All Authority they made it to the Grand Finals. Their opponents would be against All Authority once again, making Season One Finals an all European affair. After a three-game series, Fnatic reigned supreme and earned the title of the first ever League of Legends World Champions. Their prize pool winnings were $50,000. 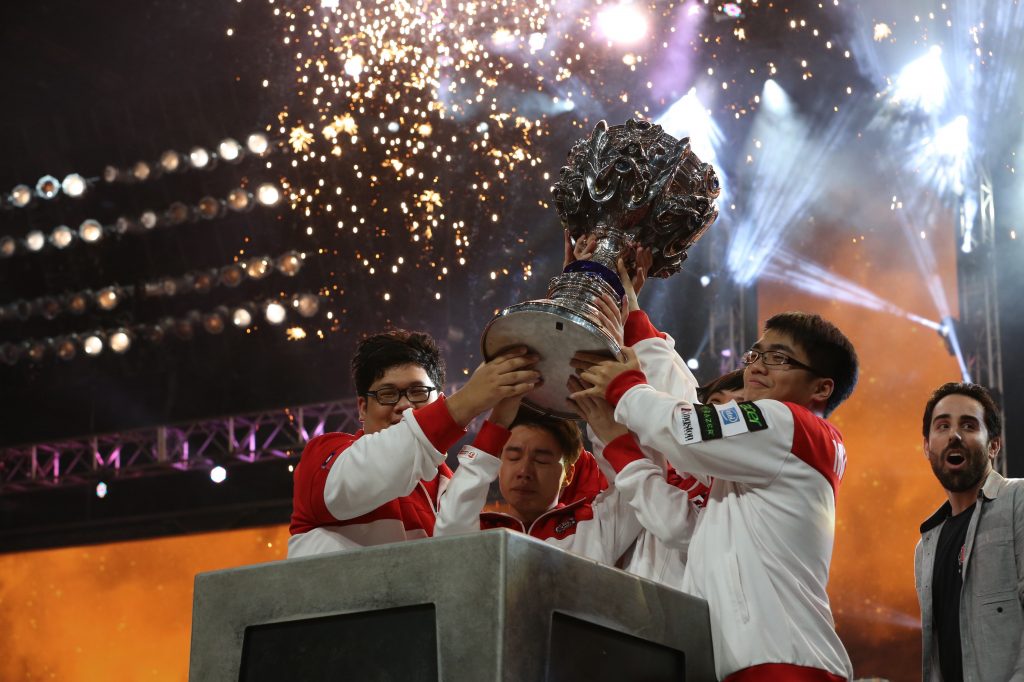 Season Two marked a major shift in the League of Legends landscape. Riot Games started committing to esports infrastructure and nurturing their pro scene. Additionally, the Korean server was released, allowing Korean organizations to start competing in the game. And they were good. Coming into Worlds 2012, the Korean teams were favored to win it all.

The tournament took place in Los Angeles, California and had a prize pool of $2,000,000; and insane jump from Season One. The regional first seeds from North America, Europe, China, and Taiwan went straight to playoffs after a random drawing. After Groups Stage ended, TPA found themselves against the Korean NaJin Sword squad.

Surprisingly, the Taiwanese team was unfazed, easily sweeping NaJin. After a close 2-1 against Europe’s top seeded Moscow Five, they were in the Grand Finals. There they faced Azubu Frost, the Korean first seed. Taipei Assassins were able to consistently shut down Azubu Frost. They would win the match 3-1 and bring home Taiwan’s first and only World Championship. 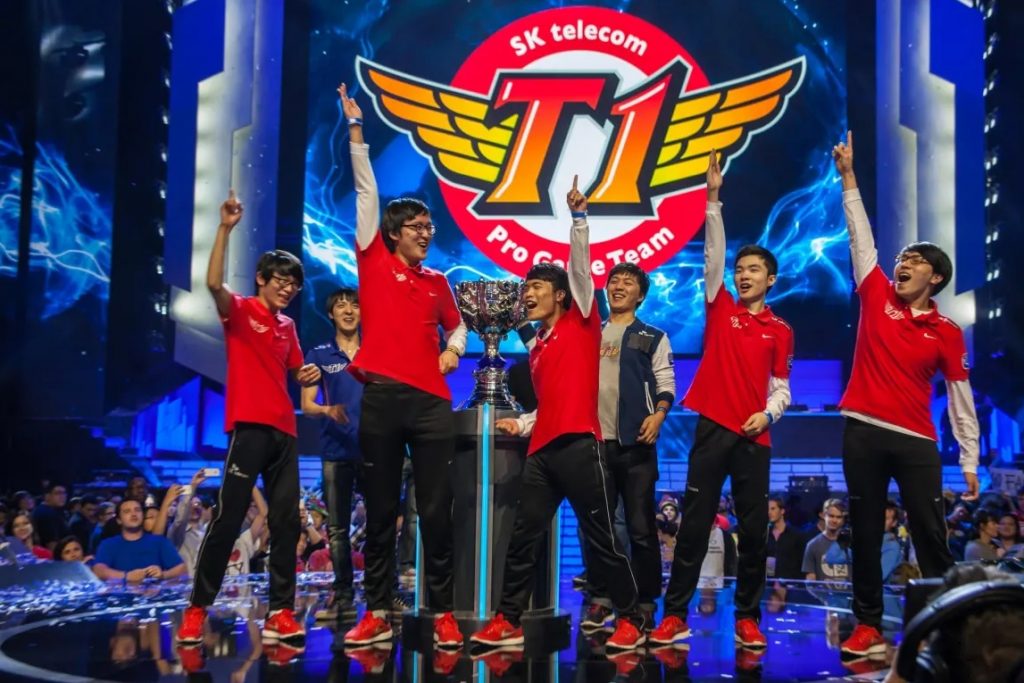 The third World Championship featured fourteen teams with the top seed from North America, China, Taiwan, and Korea going straight to Quarterfinals. The tournament was held in Los Angeles for a second year in a row and featured the same sized prize pool.

SKT was not the Korean first seed, as that title belonged to NaJin Black Sword. However, their skill would be made apparent in the Group Stage. SKT went 7-1, trading games with the Chinese Oh My God roster. SKT topped their group and advanced to face the Gamania Bears. After an easy 2-0 victory, SKT faced off against their Korean rivals in NaJin Black Sword.

The game was incredibly close with teams trading blow for blow. This match was also the first series to go to all five games in Worlds history. Eventually, SKT edged out NaJin to earn their spot in the Grand Finals. The match against Royal Club would be anticlimactic as SKT stomped them 3-0 to earn Korea’s first title. This win would mark the start of Korea’s reign over League of Legends. 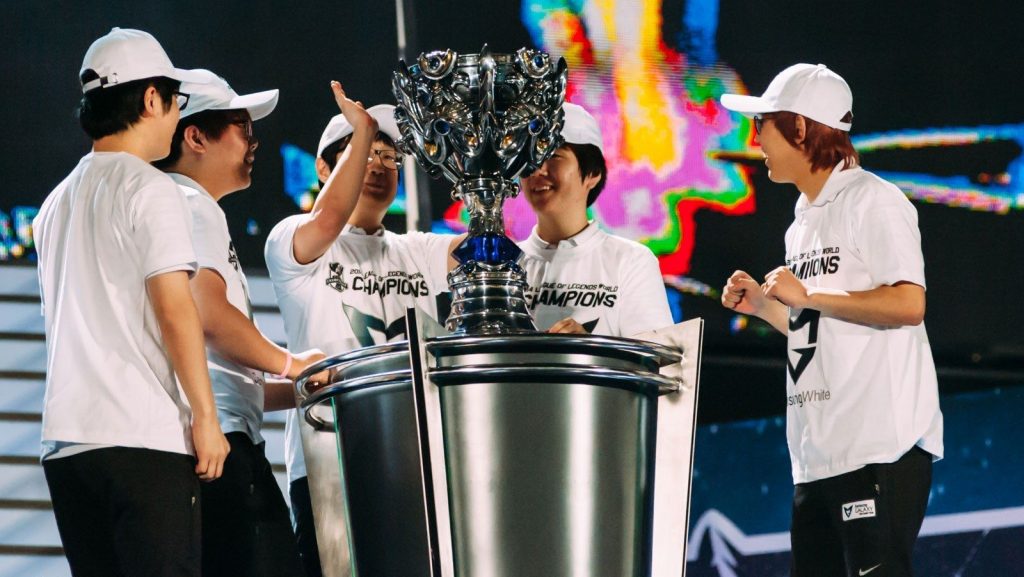 The Season Four World Championships were significant for multiple reasons. It adopted the sixteen team, double round robin Group Stage that is still in use today. This was also the first time Riot started to use the moniker “Worlds” as a shorthand for the tournament. Worlds 2014 took place in Seoul, South Korea and featured a $2,130,000 prize pool.

Hoping to continue their dominance in front of the home crown, Samsung White earned a clean 6-0 Group Stage record. They, as well as the other two Korean teams at the event, advanced out of their groups at first seed. In Quarterfinals, SSW took down Team Solo Mid 3-1. Their next test would be against their sister team Samsung Blue.

The anticipated matchup turned out to be a quick 3-0 dismantling. The Grand Finals matchup between SSW and Star Horn Royal Club was a bit more competitive, but SHRC could only muster one game win. Samsung White went on to win their first title and Korea’s second in a row. Royal Club, now Royal Never Give Up, remains the only team to be the Worlds runner-up more than once. 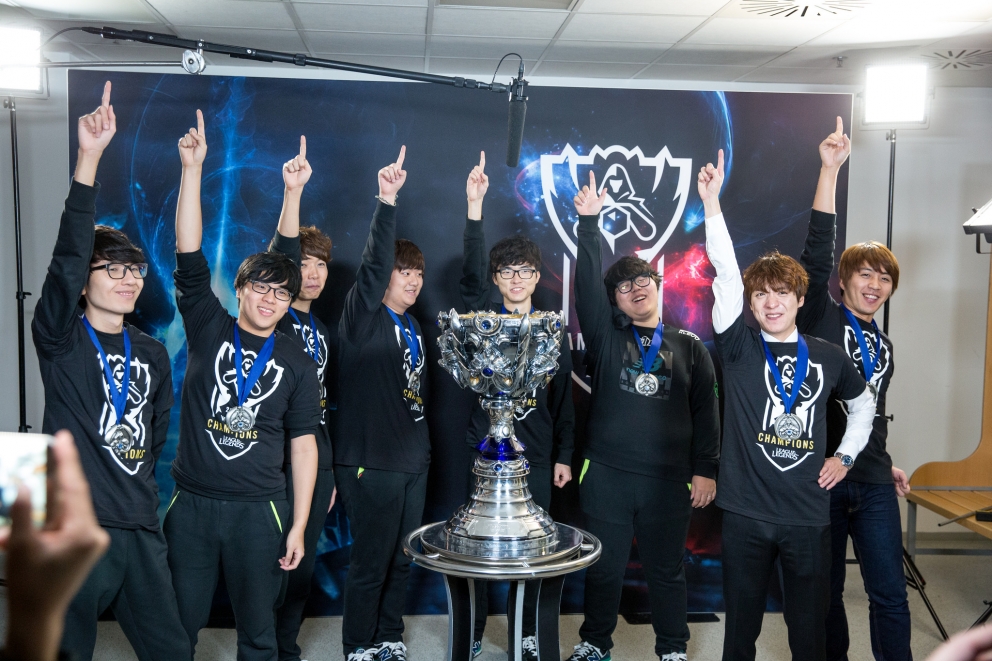 Worlds 2015 was identical in format to the previous year. It also maintained the same prize pool. The World Championship returned to Europe for the first time since Season One. Each stage was played in a different iconic city; from Paris, to London, to Finals in Berlin.

Back from a disappointing year, SK Telecom T1 had high hopes for their revamped roster. Right away, their strength would be on display to the world. The Group Stage saw SKT go undefeated after dominating all of their opponents.  Their Quarterfinals and Semifinals matchups were against ahq e-Sports and Origin respectively. Neither team could put up a fight and both got 3-0 swept.

In the Grand Finals, SKT faced off against the KOO Tigers, making this the first of three consecutive all Korean Worlds Finals. The KOO Tigers managed to take one game off of SKT, ruining their perfect Worlds run. However, that was all they could do. SKT won the series 3-1 and became the first ever two-time World Champions. 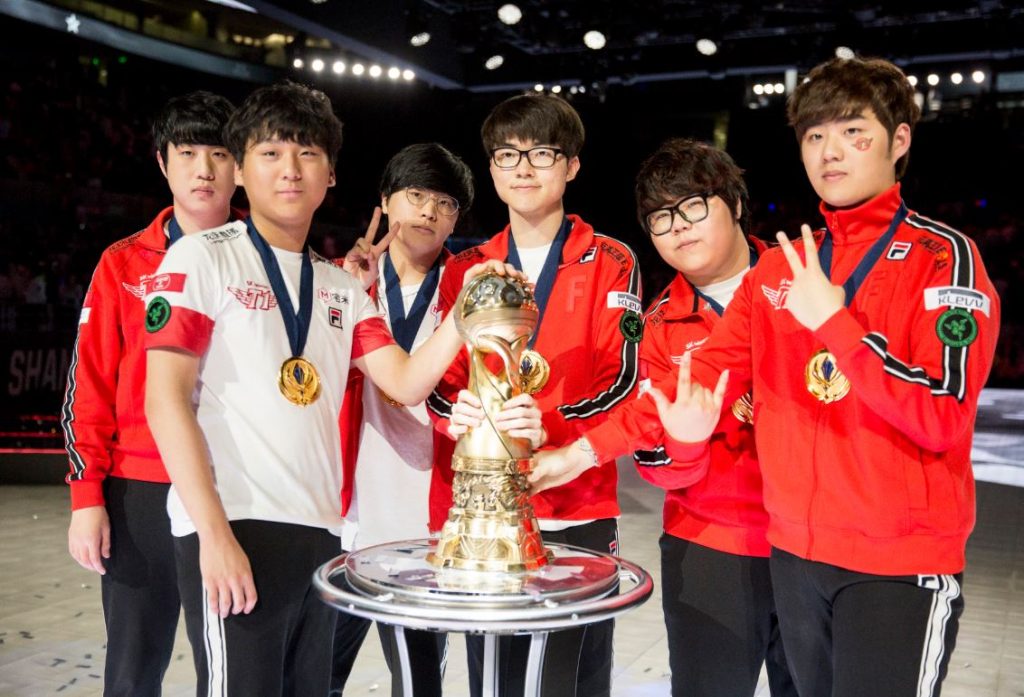 The 2016 World Championship had one major change to it. For the first time since 2012, Riot Games was drastically increasing the prize pool. Now, over $5,000,000 was on the line as the prize pool ballooned with the sale of the Championship Zed and ward skins. Worlds would return to North America with stages taking place in San Francisco, Chicago, New York, and Los Angeles.

SKT fielded a nearly identical roster from the previous year. They were hungry to become the first consecutive World Champions. However, this year would prove much more difficult. After topping their group, SKT faced off against Royal Never Give Up in Quarterfinals. RNG took one game, but SKT still looked indomitable after winning 3-1.

Their Semifinals matchup would be a rematch of the previous year’s Finals against the now ROX Tigers. This match would go down in history as one of the best series in League of Legends history. Big name players and even bigger plays lined both teams throughout the five games. In the end, SKT triumphed and earned a spot in Grand Finals. Another grueling series awaited them, this time against Samsung Galaxy. After five long games full of emotion, SKT proved that they were still the kings, even if they could bleed. SKT achieved their third title by winning the only five game Worlds Final ever. 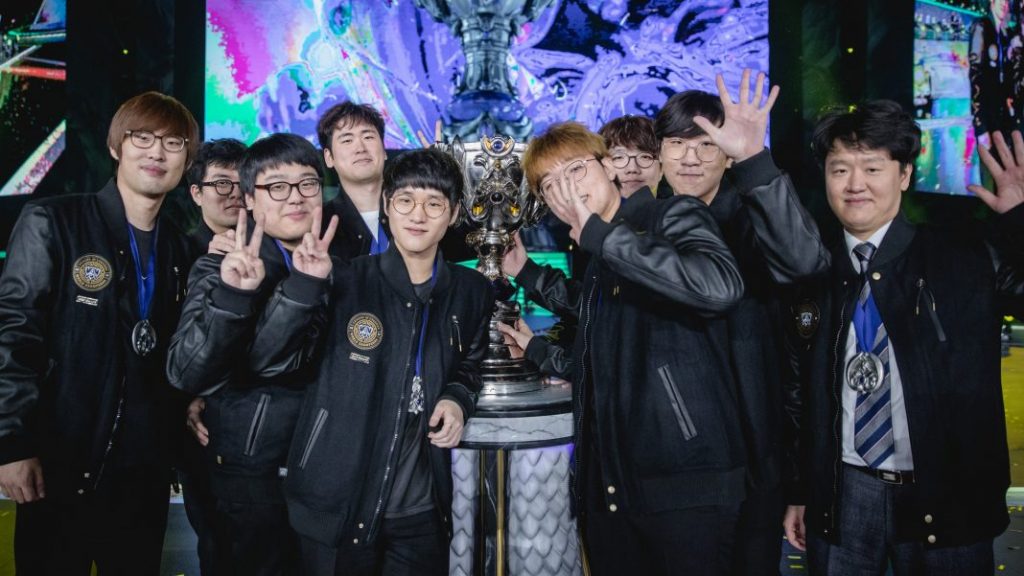 Worlds 2017 took place in China for the first time and saw Riot shake up the tournament format. In order for more minor region teams to gain international experience, 24 teams now qualify for the World Championship. The minor region and lowest seeded major region teams have to start in the Play-Ins for a chance at making the Group Stage.

Samsung Galaxy entered Worlds 2017 as Korea’s third seed, but went straight to Groups Stage due to Korea’s dominance. Their performance reflected this, as they managed to make it out in second place with a 4-2 record. In the Quarterfinals, SSG got matched against a team that dominated them in regular season, Longzhu Gaming. Longzhu had just gone undefeated in their group and were looking like the easy favorites. It was here where Samsung turned expectations on their head.

SSG easily cleaned out Longzhu 3-0, then defeated China’s Team WE in the semifinals 3-1. The Grand Finals would be an exact rematch of the previous year against SKT. Another nail-biting Finals was surely in store, until the games actually began. SKT wasn’t playing like the juggernauts they were supposed to be. Samsung’s form was too much to handle, resulting in a 3-0 sweep. Although they had a new roster, Samsung Galaxy became the only organization besides SKT to win multiple World Championships. 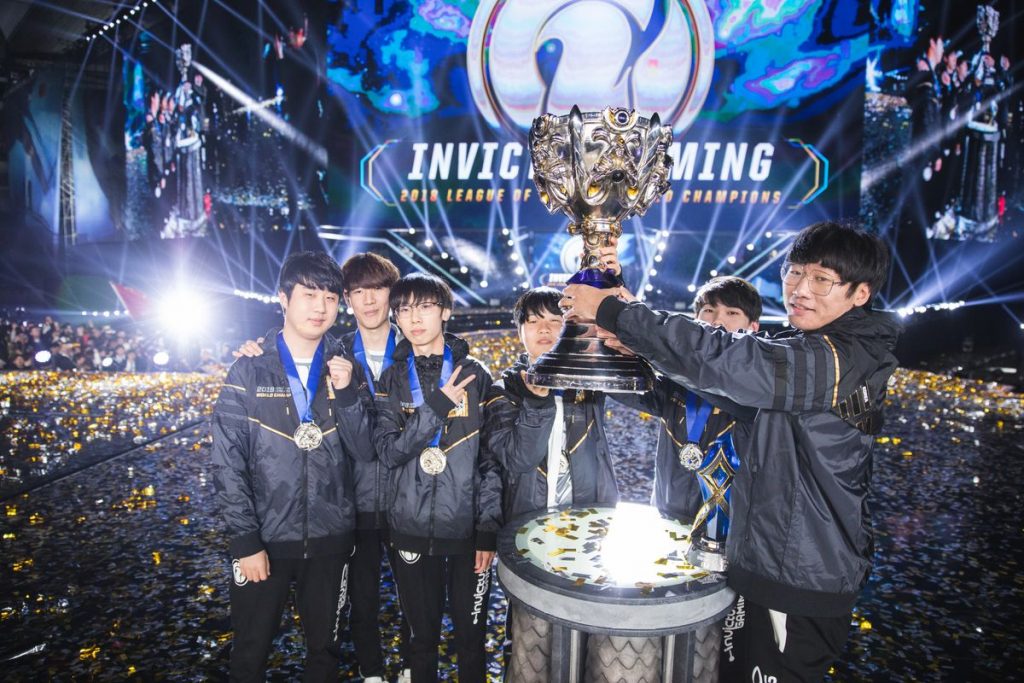 The 2018 World Championship was identical in format to its predecessor, but the prize pool did see a sizeable increase. The 24 teams would travel to South Korea to play for $6,450,000. At that time, Korea as a region was on a five Worlds win streak and were looking continue it at home. Invictus Gaming had other ideas.

For the first time ever, every Chinese team made it out of the Group Stage. Invictus Gaming lost a tiebreaker to Fnatic for first seed, meaning they would have to play Korea’s top seeded KT Rolster in the quarterfinals. The match featured the best macro team in the tournament face off against IG’s mechanical prowess. After the fifth game, IG pulled off the 3-2 upset.

No team from here on out would come close to touching Invictus. G2 Esports was easily rolled past in Semifinals and Fnatic might as well have not shown up to Grand Finals. Both matches ended 3-0, solidifying IG as the undisputed best team in the World. This achievement marked the first Chinese World Championship victory. 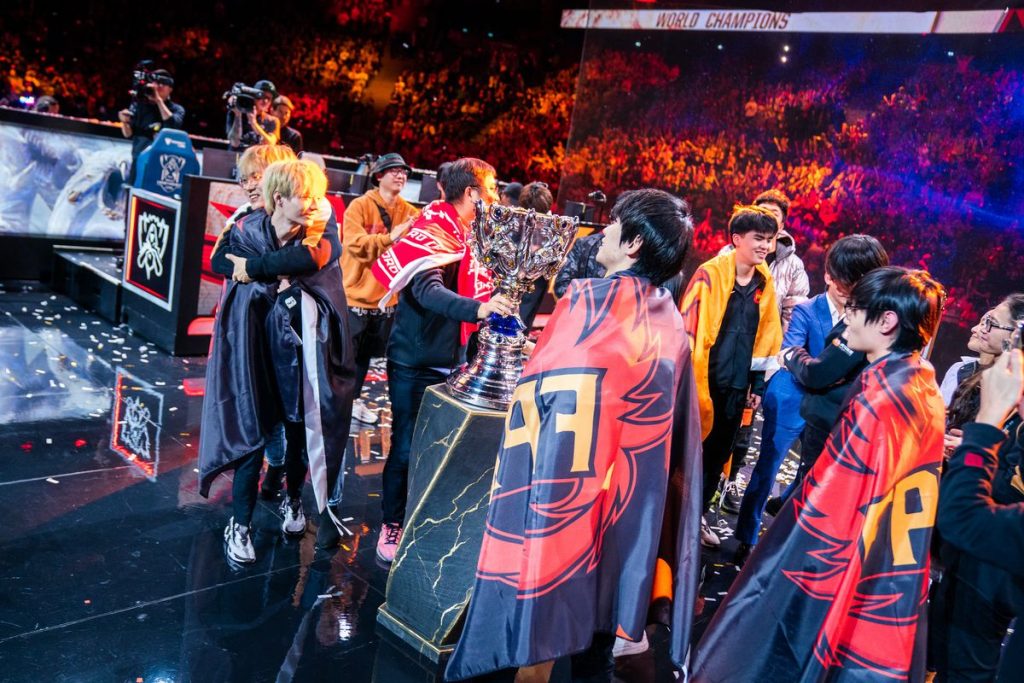 The most recent World Championship took place in Europe with stops in Berlin, Madrid, and Paris. The exact prize pool amount and Worlds skins haven’t been revealed yet, but it started at a based of $2,225,000 and will likely live up to expectations. This Worlds was interesting because for the first time, all four major regions had a realistic shot at the title.

As China’s first seed, FunPlus Phoenix was expected to dominate the Group Stage. After a slow first week, FPX barely managed to escape their easy group. Their confidence could have been shaken, but FPX were quick to recover. The Quarterfinals against Fnatic were clean and controlled ending in a 3-1 win.

In the Semifinals, FPX found themselves against the defending champions Invictus Gaming. This regional clash had Grand Finals vibes, as both teams brought China’s aggressive style into the spotlight. The chaotic match went to four games, in which FPX’s draft and team fighting reigned supreme. The true Grand Finals against G2 Esports was touted as a battle for regional supremacy after Korea’s falling off. In the end, FPX demolished the European squad 3-0, earning a second consecutive Worlds title for China.

Season 10 – To Be Determined

League of Legend’s tenth competitive season has only just begun. Hopes are high for teams around the globe as everyone is competing for circuit points and regional titles. Worlds is a long way away, but it remains ever present in the minds of players and fans alike. Nothing quite compares to Worlds, and no matter who is crowned the next champion, they too will go down in history.