The History of El Classico

In the history books of Dota 2 esports, no other clash is as seasoned an meaningful as El Classico.

Despite the years rolling by and many new rivalries forged, in the world of Dota 2, there is no other match-up looked upon as fondly as El Classico. The term “El Classico” was coined for encounters between football’s Real Madrid and Barcelona in La Liga. But in Dota 2 it refers to a clash between Alliance and Natus Vincere, two TI winning organizations. How did this match-up become so beloved? More importantly why has it stood the test of time?

To fully understand the quasi-obsession with El Classico, it’s crucial to understand the dawn of Valve’s MOBA – Dota 2. The original Dota was simply a mod for Blizzard’s Warcraft 3. It created a monstrous following particularly in Europe and China between 2008 and 2011, but as an esport it had failed to really make its mark. Outside of China, Dota tournaments were something of a novelty. As a result Chinese teams were prolific on the rare occasions they did face up against western opposition.  The rest of the world was playing catch-up, but there was hope from the western audience that one day that would change. Fortunately, it did with the arrival of Dota 2.

Dota 2, as an esport, launched publicly with an extravagant $1.6 million tournament at GamesCom 2011 called The International. Thanks to TI, the underground Dota 2 scene was going mainstream for the first time.

“Half the teams were well prepared, the other half are here just to play for fun,” said Na’Vi’s XBOCT during the tournament, and Na’Vi were definitely taking it seriously.

In the wake of Dota 2’s launch, Na’Vi recruited the explosive Danil “Dendi” Ishutin, a Ukranian teenage star with a thirst for competition. Alongside him was his former DTS Gaming team-mate Artstyle – and later Dmitriy “LighTofHeaveN” Kupriyanov. Together they placed second at ESWC 2010 and third at the World Dota Championships 2010.  The final piece of the puzzle was Estonian Clement “Puppey” Ivanov , a commanding presence in the scene, and a player with determination to be the world’s best.

The first iteration of Na’Vi flew to Gamescom in Germany for The International in the summer of 2011, and came out victorious. Their prize – $1,000,000. A sum larger than all of the 94 Dota 1 tournament prize pools combined. With the world watching, Na’Vi became stars overnight. The first team to win $1 million in the history of esports. 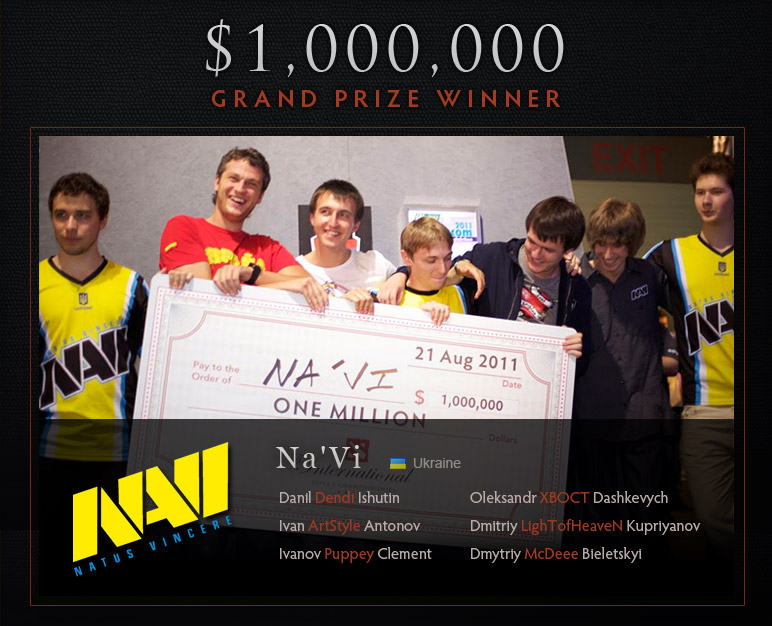 The Last Line of Defense?

Na’Vi returned the following year with only one change to their roster, and once again made it to the Grand Finals of The International. Although they finished runners-up, the competition was much fiercer. The Chinese scene was growing in strength, and more players were making the transition from Dota 1 to Dota 2. In fact, at TI2 Na’Vi was the only team to finish in the top eight to not come from Asia. With Invictus Gaming winning TI2, and LGD Gaming and Team DK 3rd and 4th, it looked from the outside as if China was about to monopolize the game, with Na’Vi as the last line of defense.

Fortunately, a new team was making waves in Europe. A team originally called “No Tidehunter”. It housed two old friends – Swedes Jonathan “Loda” Berg and Joakim “Akke” Akterhall, who carried the torch for European Dota playing for SK Gaming back in Dota 1.

The duo teamed up with two more Swedes in Gustav “S4” Magnusson, a promising young strategist, and Henrik “AdmiralBulldog” Ahnberg, a PUB star known for his mastery of two underplayed heroes; Lone Druid and Nature’s Prophet. Although the team was originally led by Canadian Jacky “EternaLEnVy” Mao, he was overthrown by the Swedish majority and replaced by Jerry “EGM” Lundkvist. This all lead to the creation of the now iconic all-Swedish roster in February 2013. By April, the five Swedes formed Alliance, a brand new organisation with money behind it that would amp up the credibility of the formidable new roster.

Alliance swiftly grew in strength. They stamped their authority internationally with a 7-0 run to win the G-1 Champions League in China in May, won DreamHack Summer in June, then Starladder in July. Alliance were gathering momentum, but so too were Na’Vi.

The arrival of Gleb “Funn1k” Lipatnikov and Kuro Salehi “Kuroky” Takhasomi, a former team-mate of captain Puppey in early 2013, led to a dip in results for Na’Vi. But in July they began to hit their stride. Likewise, they won three stacked events back-to-back. With The International 2013 just around the corner, the expectation for the inevitable clash between the two teams grew with each passing day. 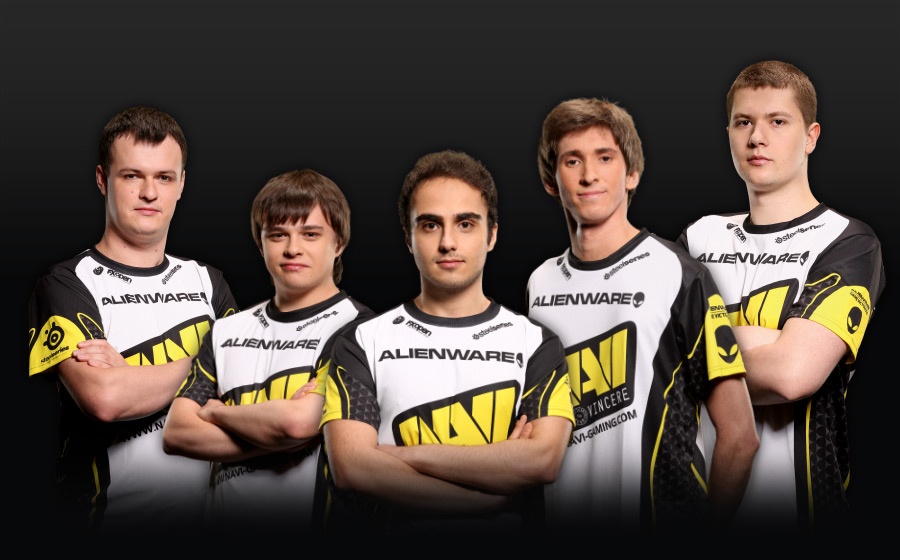 The Ultimate Clash – The Birth of a Legacy

The reputation of the El Classico between Alliance and Na’Vi was forged in the fires of The International 2013. There was no doubt heading into TI3 that they were both incredibly gifted teams, but what went down in Seattle immortalized both rosters.

Both Na’Vi and Alliance attended TI3 as direct invites to the $2.8 million event. They also both outclassed the opposition after being placed in opposing groups. Fears that China would take over Dota 2 proved misplaced. Alliance and Navi were mercilessly outshining the best, just like they had done in the run-up to the event.

The pair first met in the upper-bracket final, where Alliance demolished Na’Vi. The script for the event had been burnt to a cinder – how could Na’Vi fall so easily? Surely they’ll come back? And they did. Making it to the Grand Finals and paving the way for the ultimate rematch.

Na’Vi who were on the brink of becoming double TI champions were now the underdogs. They were facing the new kids on the block, a new European superpower in Alliance. The stage was set for the final showdown worth $1.4 million.

Thousands of fans tuned in to see who would fall first; the split pushing strategic Alliance, or the team fight mavericks Na’Vi. The TI3 Grand Finals was not a case of good versus evil, or rat versus exterminator, but simply a celebration of good Dota. Both teams deserved to be in the Grand Finals, and both rosters had players that were more than just nicknames for fans around the globe. By this point Loda, S4, Dendi, Puppey, AdmiralBulldog were all household names.

All On Game Five

The Grand Finals was an extravaganza that went the full five games. Alliance struck first with a lightning fast game, winning in just 15 minutes, before Na’Vi hung them out to dry in game two. It was now evident the series could go either way, and fans were on the edge of their seats for the first time in a TI Grand Finals. Game 3 was neck and neck, going for 47 minutes, but Na’Vi grinded out the win with an intricate draft that included a mid Wisp for Dendi and an offlane Razor for Funn1k. They were just one win away from becoming double TI champions but could not stop the brute force of S4’s Nightstalker in game four, taking a beating to force a fifth and final game.

Words can not truly express the sheer insanity that was game five. It was the perfect finale to the storyline of these two teams. It was a rollercoaster of emotions that saw Alliance snatch a win despite unbelievable adversity:

The Impact of Alliance Versus Na’Vi

Alliance were crowned TI3 champions but for fans both teams were winners. Their incredible battle became symbolic of Dota 2’s potential for entertainment. Post-TI3 the player base for Dota 2 spiked and grew from 420,000 to 700,000 in the space of four months. Alliance versus Navi’s epic 3-2 final showdown was undoubtedly one of the major contributing factors behind the arrival of a swarm of new players.

From then on Na’Vi versus Alliance became known as El Classico. Since the historic Grand Finals in the summer of 2013, Alliance and Na’Vi have played a staggering 85 games against each other across all competitions. Despite both organizations now fielding completely different rosters, the match-up still draws huge viewership even seven years after, regardless of their form. With both organizations still active in the Dota 2 space, things could change, but for now Na’Vi are in the lead, with 44 wins to Alliance’s 41.

If you’re a “real” Dota fan, you should have an affinity for one or the other, because the TI3 El Classico Grand Finals is where Dota 2 truly became an esport.