The Best Clown Fiesta Games in League of Legends 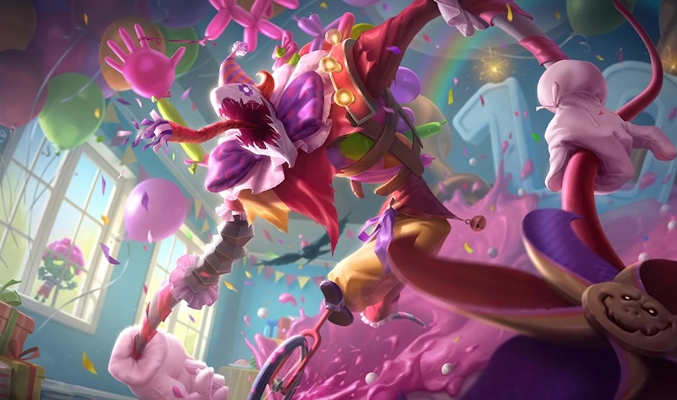 Some of the most well-known games in LoL history, are also the worst in terms of gameplay. (Photo courtesy Riot Games)

Some of the most exciting and memorable moments in League of Legends esports come when we least expect them. Perfectly executed rotations and flashy outplays are great for highlight reels, but for spectators, the rare blunders and imperfections that defy what we’d expect from the pros are priceless.

Throughout history, some of the most iconic matches were also some of the worst, in terms of game quality. We’ve all seen them: base races, cheezey level ones gone awry, multiple missed skillshots and Baron throws. These crazy games where nothing seems to go right were affectionately dubbed “clown fiestas” by the community. They’re all equally as embarrassing to watch, but somehow you can’t look away.

Clown fiestas are usually super entertaining for those watching, but horrible for the teams playing, since it usually means they weren’t playing well. Regardless of the outcome, each team better be ready to go down in League of Legends history. Here are some of the best clown fiestas we’ve had over the years.

While most European LoL fans are at least a little bit used to the idea of G2 Esports winning everything, the 2019 roster was one that would eventually go down in history as the greatest European lineup of all time.

Now G2 has been known to troll games, but against their toughest opposition in Fnatic, most people expected them to bring their best. Instead, the game devolved from what seemed like a Fnatic-favored slaughter into a string of desperate attempts by G2 to claw back into the game. After a string of backdoor attempts by none other than Zdravets “Hylissang” Iliev Galabov’s Rakan, Fnatic barely won out in a heated base-race.

It goes without saying that this match between two bottom tier teams wasn’t supposed to be anything special. Weirdly enough, the game contained two moments that happened nearly back-to-back that will stick with longtime fans forever.

By about five minutes, the game reached a state where there were four total deaths without a single team getting a kill because two members of Dignitas died to tower shots while another two members of Renegades died to Rift Herald. Renegades eventually emerged victorious after a fitting backdoor from top laner Shin “Seraph” Wooyeong, but that was the type of game nobody could feel very good about winning.

Curse and Complexity are names buried deep within the history of LCS. While it’s unlikely that either brand will make another appearance in the LCS any time soon, they’ve definitely left their mark.

People may associate Curse with fourth place (and Team Liquid), but this near-80 minute game is probably the only relic left behind by Complexity. For the first 50 minutes, the game was mostly stagnant until multiple teamfight throws ensued. Despite having multiple chances, none of the teams were able to end until COL ADC Robert “ROBERTxLEE” Lee took the Nexus down himself.

This match at the recent 2019 World Championship was an instance where fans wanted the game to be as long and exciting as possible.

RNG was in the lead for a good portion of the game, and the two teams ended up tossing the ball back and forth to each other. Just as RNG was making what could’ve been their final push,  Lee “Faker” Sanghyeok called on his teammates to teleport into the enemy base and finish once and for all.

TSM has only made a finals appearance once in the past two years, and this 2020 lineup was supposed to give them the opportunity to do so once again. After showing inconsistencies all split, their playoff match against 100T could’ve gone either way.

It was a grueling five-game series that very easily could’ve been a clean 3-1 by 100T. In the fifth game, when all hope seemed lost, they barely inched out of a teamfight before blitzing 100T’s base. Right before TSM wiped, team captain Søren “Bjergsen” Bjerg managed to slip in the very last auto needed to end the game. If he hadn’t 100T would’ve been able to end right then and there.

Clown fiestas are hilarious because of the spectacle they create, but more often than not they can also be a symptom of poor play from both sides. At the end of the day, it never gets old watching the best teams throw standard strats out the window and just throw themselves at each other.