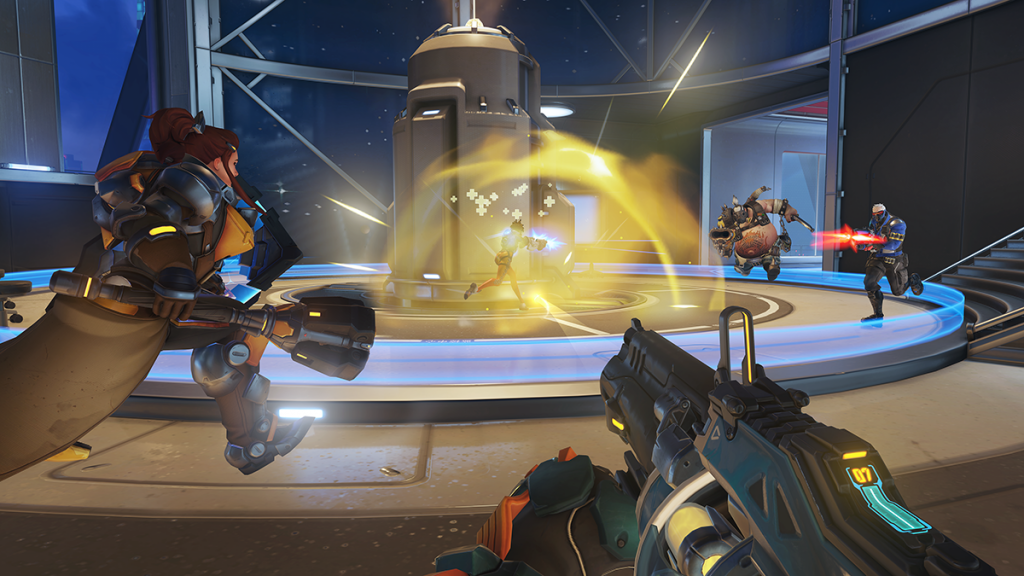 This guide to Overwatch map types describes the fundamentals of Control, Assault, Escort, and Hybrid (Image via Blizzard Entertainment)

Overwatch’s diverse map pool transports players around the world and even to the moon, providing an engaging and exciting atmosphere for players as they develop strategies and work together to achieve common goals. Each Overwatch map in the competitive pool is categorized into one of four types: Control, Assault, Escort, and Hybrid.

Each of these map types has a different ruleset, and caters to certain strategies and hero choices over others. This guide to Overwatch map types describes the fundamentals of Control, Assault, Escort, and Hybrid, and then gives a few tips to help beginner players avoid common errors and apply game plans that will help lead them to victory. 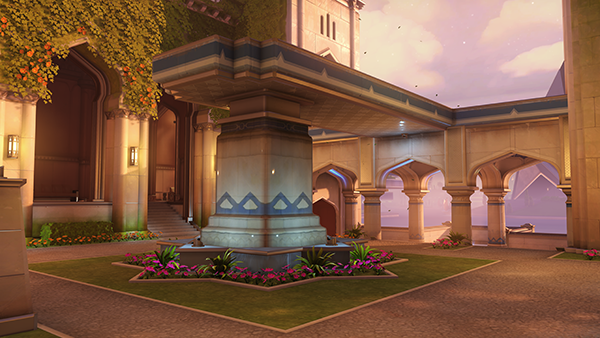 How does Control Work?

In Control, often called King of the Hill, teams fight to take over an objective in the middle of the map, and then hold it until their capture percentage reaches 100%. Each control map has three separate sub-maps, with a team needing to win a best-of-three in order to achieve overall victory. For example, within the control map of Ilios, players experience different environments and challenges in the Lighthouse, Ruins, and Well stages.

Unlike any other Overwatch map type, teams are not immediately designated as attackers or defenders. Control begins with both teams’ spawn rooms on the opposite ends of a perfectly mirrored map, giving competitors no initial advantage over each other. Once the map starts, it takes 30 seconds for the objective to unlock, allowing for this area to be taken by one of the teams.

In order to take control of an objective, a team must clear off all enemies while maintaining a presence in the objective area for a certain amount of time. Once the objective is taken, capture percentage begins to build. This will continue to get closer to 100%, unless the enemy team is able to take control themselves, starting their capture percentage and pausing their opponents. If a team reaches 100%, the round is over. The first team to take two objectives wins.

While each Control map offers exciting environmental obstacles and layouts, there are heroes that are extremely versatile across most settings. Lucio is one of the most flexible heroes for Control due to his speed boost and ability to use his sonic amplifier to “boop” enemies and score environmental kills for his team. However, if you are not comfortable playing Lucio and prefer another healer, use this quick tip at the beginning of a round.

Because Control maps are perfectly mirrored, you can give your team an advantage by starting the map as Lucio. As soon as the spawn doors open, use your speed boost and “Amp It Up” ability to propel your team forward, while you stay in spawn to switch to the healer of your choice. This could lead to your team reaching the control point first, giving you a positional advantage. Another similar option is for a DPS player to use Symmetra’s teleporter in spawn for an early head start, then switching to the hero of their choice.

One common error in Control is failing to regroup. Once a team takes the control point, their capture percentage continues to increase until every member is driven off for a short period of time. If your team loses the first point, instead of attempting to reach the point on your own as soon as possible, wait for the rest of your team to regroup. This will allow you to combine ultimates more effectively, and prevent individuals from being picked off early, giving the enemy precious ultimate charge that will strengthen their hold. 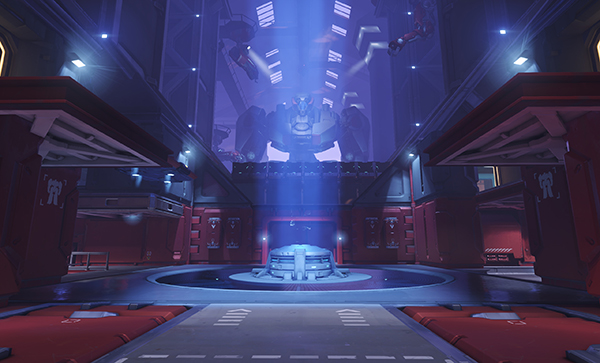 Point B of Volskaya Industries (Image via Blizzard Entertainment)

How does Assault Work?

Teams are designated as either attackers or defenders in Assault, also dubbed 2CP due to the two control points each team must capture. In this Overwatch map type, the attacking team tries to capture two control points – first Point A, then Point B – before time runs out. Defenders have 45 seconds to set up around Point A, after which the attackers are released from spawn and are given four minutes to take Point A.

In order to take a control point, attackers must both clear the defenders off and stay within the objective to build capture percentage. This percentage is paused if a defender is on the point. Both points’ capture percentage is broken down into thirds, often called “ticks.” If a team takes 33% or 66% of the point, their progress will be saved. However, if the defenders clear attackers off the point at 50%, progress will go back down to 33%, a single tick of the point.

Once attackers take Point A, Point B unlocks and three minutes are added to the clock. In Competitive games, once the attackers either take Point B or run out of time, teams switch roles. If both sides finish the Assault map, there will be additional rounds with teams having their remaining time bank left to take both objectives, only receiving 30 additional seconds if Point A is taken.

Assault maps often have chokes built into the structure of the map, whether it is Paris’ long streets approaching Point A, or Temple of Anubis’ narrow Point B. An effective defensive composition that takes advantage of these chokes is called the Bunker Composition. This composition typically centers around an Orisa protecting the high damage-dealer Bastion. A variety of supports can work with a bunker, Baptiste’s Immortality Field and Mercy’s Resurrect and damage boost abilities can both be extremely frustrating for any attacking team to deal with.

A tip for attackers is to be mindful of how spawn locations can give a team the advantage. The defenders’ spawn does not move during an Assault map, it is positioned directly behind Point B. Therefore, one or two eliminations in the attacker’s favor on Point A usually means that the first point has been taken and that very few to no ultimates need to be invested.

However, Point B is completely in the defenders’ favor due to their spawn advantage. While a quick pick could solidify a fight on Point A, if Attackers are unable to eliminate their enemies quickly enough, stall hero picks such as Mei or Roadhog can give the defenders enough time to regroup and prevent Point B from being taken. Bring heroes with great ultimate combinations, such as Zarya’s Graviton Surge and Hanzo’s Dragonstrike, or Mei’s Blizzard combined with Reaper’s Death Blossom, to get quick multikills and finish the fight. 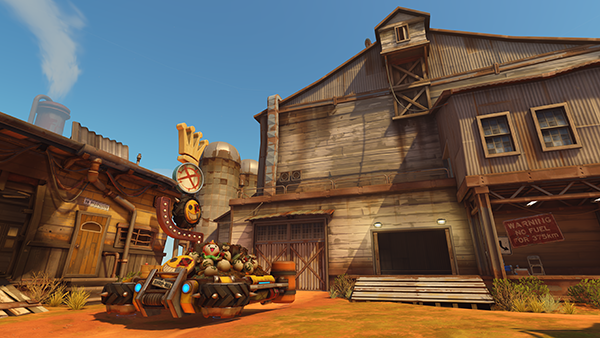 The beginning of Junkertown, an escort map (Image via Blizzard Entertainment)

How does Escort Work?

Unlike Assault and Control which center around points, in Escort gameplay revolves around a payload. The payload is a vehicle that the attackers must guide through the map’s three checkpoints before time runs out. Defenders attempt to stop the payload from moving forward, which is possible by standing in its proximity. Attackers are able to progress through the map by staying by the payload and clearing off any defenders.

In Competitive games, once the attackers either are stopped or guide the payload to the third and final checkpoint, teams switch sides. In order to win Escort, a team must push the payload further than their opponents. If both teams finish the map, they will be given their remaining time bank to attack again and push the payload as far as they can. In the case that a team finishes Escort with less than a minute remaining, a minute will be added to both teams’ time banks.

Although sometimes it can be difficult to find teammates who want to stay on the payload, there are great advantages to sticking to the objective. Not only does the payload move more quickly when more heroes surround it, with the highest speed being reached when three teammates are on point, it also heals. Attackers near the payload are healed at a rate of 10 health per second.

The bunker composition is extremely useful on both Assault and Escort maps. In a strategy often called the Pirate Ship, the attacking team’s Orisa and Bastion can sit on the payload, allowing Bastion to stay comfortable in his powerful turret form while the payload carries him throughout the map. Bringing along a Sigma alongside Orisa can either protect the Bastion from all angles, or can block snipers on more open maps such as Junkertown.

It can be difficult to dislodge a bunker composition, but teamwork is the key to overcoming this powerful Bastion strategy. Once a Bastion is removed from the payload, it can be very difficult for this hero to return to his perch. One of the most consistent ways to do so is to combine three ultimates: Sombra’s EMP, Ana’s Nano-Boost, and Genji’s Dragonblade. Once Sombra EMP’s, removing all enemy shields, abilities, and forcing Bastion out of turret mode, Ana can Nano-Boost her Genji to help ensure his survival while slashing the enemy to pieces. 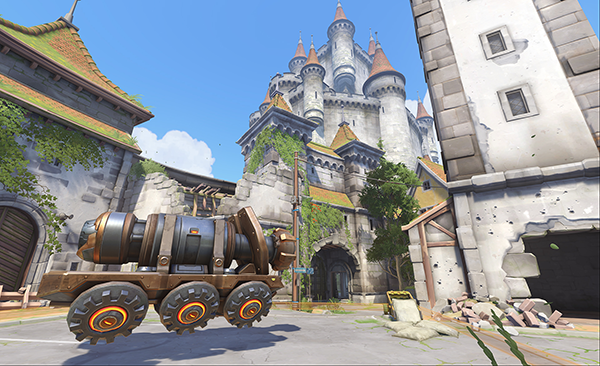 How does Hybrid Work?

Hybrid maps are a combination of Assault and Escort map types, incorporating both control points and payloads. Teams are split into attackers and defenders, with defenders being given 45 seconds to prepare their defenses around a control point. Exactly like Assault, attackers must first capture this first point within five minutes in order to unlock the remaining portion of the Hybrid map.

The process of taking the first point in Hybrid is identical to how attackers take Point A in Assault. Once the first point is taken, 2:30 is added to the clock, the Escort portion of the Hybrid map is unlocked, and the payload parked in the middle of the objective begins its long trek through two more checkpoints. Just like Escort, when a defender is contesting the payload, all progress is paused until the Attackers are able to clear their opponents off. However, if the defenders are able to remove attackers from the objective, the payload will begin slowly moving backward.

If the attackers reach the second checkpoint, 1:30 is added to the clock. The round ends when either the attackers complete the map, or the defenders are able to keep the attackers from staying on the payload when time runs out. In Competitive games, teams switch sides, and if both are able to complete the Hybrid map,  they will be given their remaining time bank to attack the first control point and if successful, push the payload as far as they can.

Although the payload can be extremely helpful with shielding players from bullets and D.Va Self Destructs, Overwatch’s futuristic vehicles’ lack of wheels create an opportunity for Reinhardts – as the payloads levitate. While enemy shields can still block Earthshatters, Reinhardts can capitalize on their enemy’s false sense of security behind the payload and achieve massive stuns from the other side.

Always stay aware of the time remaining in each round and the location of the payload. While this may sound simple, even professionals have found themselves losing track of these variables, leading to avoidable mistakes. If defenders are not paying attention to the payload, a sneaky attacker, typically a Tracer or Sombra, can backcap a checkpoint. In Hybrid, this is when the payload is stealthily escorted to an objective without the defenders realizing, often due to a distracting team fight. Attackers can experience an equally unfortunate feeling when they fail to touch the payload when time runs out, preventing Overtime from being activated.

Ultimately, every Overwatch map type provides players with the opportunity to experiment with compositions, try new heroes, and deepen their understanding of both the current meta and their overall gameplay. Hopefully, these explanations and tips can help you avoid common mistakes and start to create some incredible highlight reels.

Share
Katrina is an interviewer and analyst based in Los Angeles. When she's not at the Blizzard Arena, you can find her either working with data or asking her teammates for healing.
Follow me