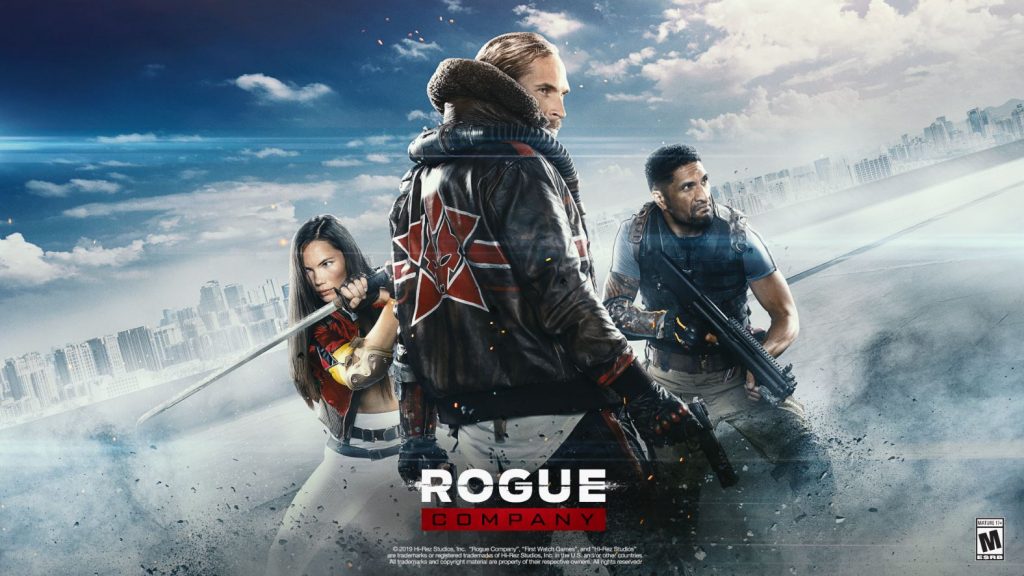 Rogue Company’s 13 playable characters, aka Rogues, are all fairly balanced. But how do they stack up? (Photo courtesy Hi-Rez)

Hi-Rez’s Rogue Company is gaining speed across platforms across the world. Now the player base has had time to test out different Rogues; there seems to be a consensus that this a very balanced game. And we could not agree more. Here is our take on the strength of the Rogues currently in the game, especially for the Demolition game mode. 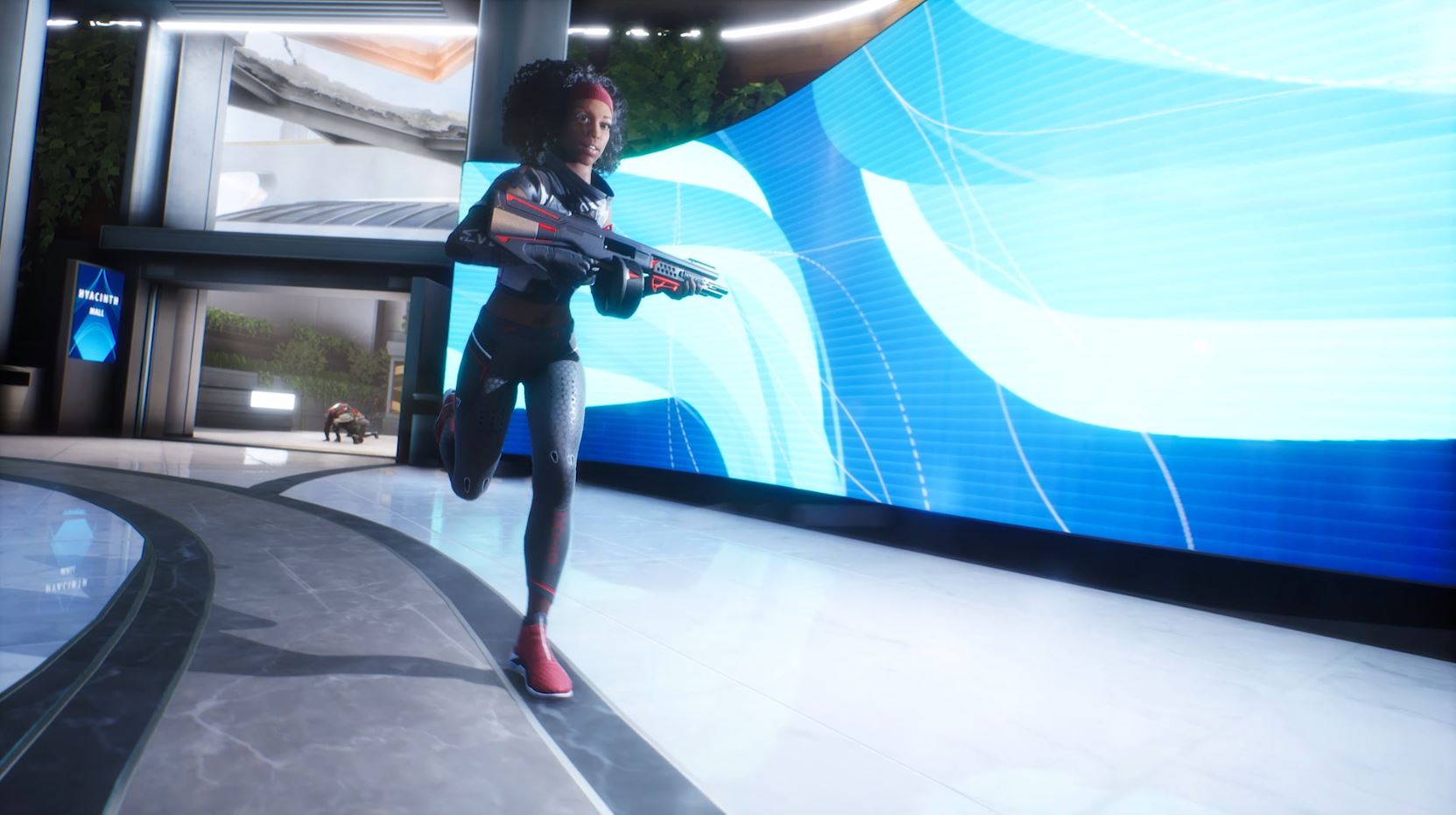 Ok, legit, Lancer may be the best Rogue in the game. Rogue Company is a swift game, and Lancer excels at movement. Her ability to roll and reload at the same time is a great feature of her kit. There is never a moment where a Lancer should feel she cannot generate pressure. This is particularly amazing when it comes to opponents who want to regenerate their HP. In the time they take to hide, reload, and escape combat, the Lancer will already be pushing them, having reloaded before they even have a chance to think. Combine this with the two smoke grenades she can potentially have, and she will feel no pressure for pursuing the kill. Not to mention these two smoke grenades can also position her to facilitate entire setups by herself. Lancer is the most self-sufficient Rogue in the game.

Scorch is the best duelist character for damage by far. Her Burnout ability is the key to success, reloading her current active magazine to an incendiary magazine. This makes every aspect of her kit even more powerful. While Overheat is dropping from a 15-second to 10-second duration, that is still plenty of time for Scorch to get up close and 100-0 an opponent in less than a second.

Saint is the only support in the game currently; however, his impact on the game stands out. His recovery drone allows him to revive downed players anywhere on the map. Think of him as an X-COM Specialist, except in a shooter. Also, he has one of the only guns in the game that can toggle into a first-person ACOG. With the way third-person aim in works, this first-person perspective on his MLX is great for controlling those long the medium angles. Furthermore, he has smoke grenades, which is hugely beneficial for getting attacks and defenses setup. Saint feels like the core of any composition and can serve any well-coordinated team efficiently. 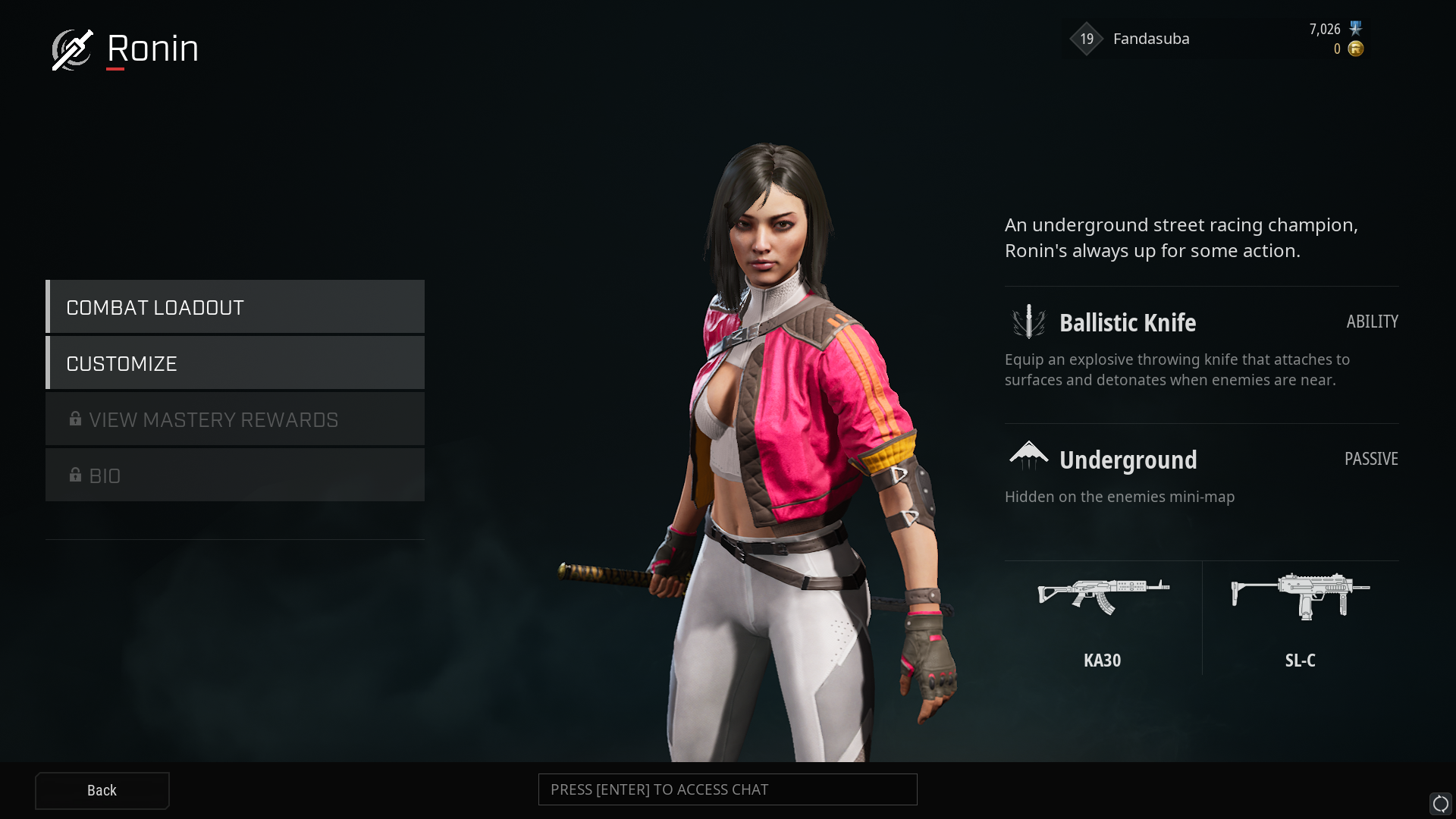 While Ronin as a duelist character is weaker in terms of close quarters contest, she carries an assault rifle, an explosive throwing knife that sticks to surfaces and a grenade. Ronin is the tactical supremacist amongst the duelists. Her explosives come in use for flushing out enemies behind cover, or great for stopping potential flanks. Plus, her assault rifle makes her great for countering pushes or getting opening picks. Ronin is reliable for anything you want to do in a half.

Chaac is a bit more 2D than other duelists in the game. His shtick is all about being able to actively heal at any moment, or even self-revive when he is downed. The revive ability takes just as long as it would take to revive normally, so Chaac must be careful where he falls. Chaac seems to be an excellent entry fragger on harder to assault maps, or the perfect fit for lurkers and off-site openers due to his self-heal..

Talon is an intel Rogue all about tracking certain areas with his Radar Dart. This ability provides real-time tracking of opponents in the Dart’s radius. Talon can throw this ability quite far, meaning he never really has to overexpose himself to get it in play. This is great, especially when rushing to key spots and spotting out site retakes, rotations, or potential site assaults. Combine this with the greatest damage per round SMG or effective DMR and Talon becomes a well-rounded Rogue. The only issue here is his skill cap. Players will need to learn about maps, player movement and other macro skills to get the most out of Talon.

Dallas is the other intel-based Rogue in the game. While Talon must actively think about where to track, Dallas presses a button and sees the closest enemy too him. Using Target Finder at the start can track if someone is pathing towards a site, or if someone is lurking around the corner. If Dallas downs his marked opponent, then the ability will reset, meaning the bounty hunter can become the ultimate bloodhound. However, players will need to take caution, as finding one opponent may spring a trap and Dallas may go down if the other team expects him to push.

On top of this, Dallas has one of the best pistol rounds in the game. Being on the receiving end of his revolver is akin to being hit by a truck, especially if it is a headshot. And that goes for any point in the game for that matter. The smart and the well-aimed players will find Dallas a dominant pick. 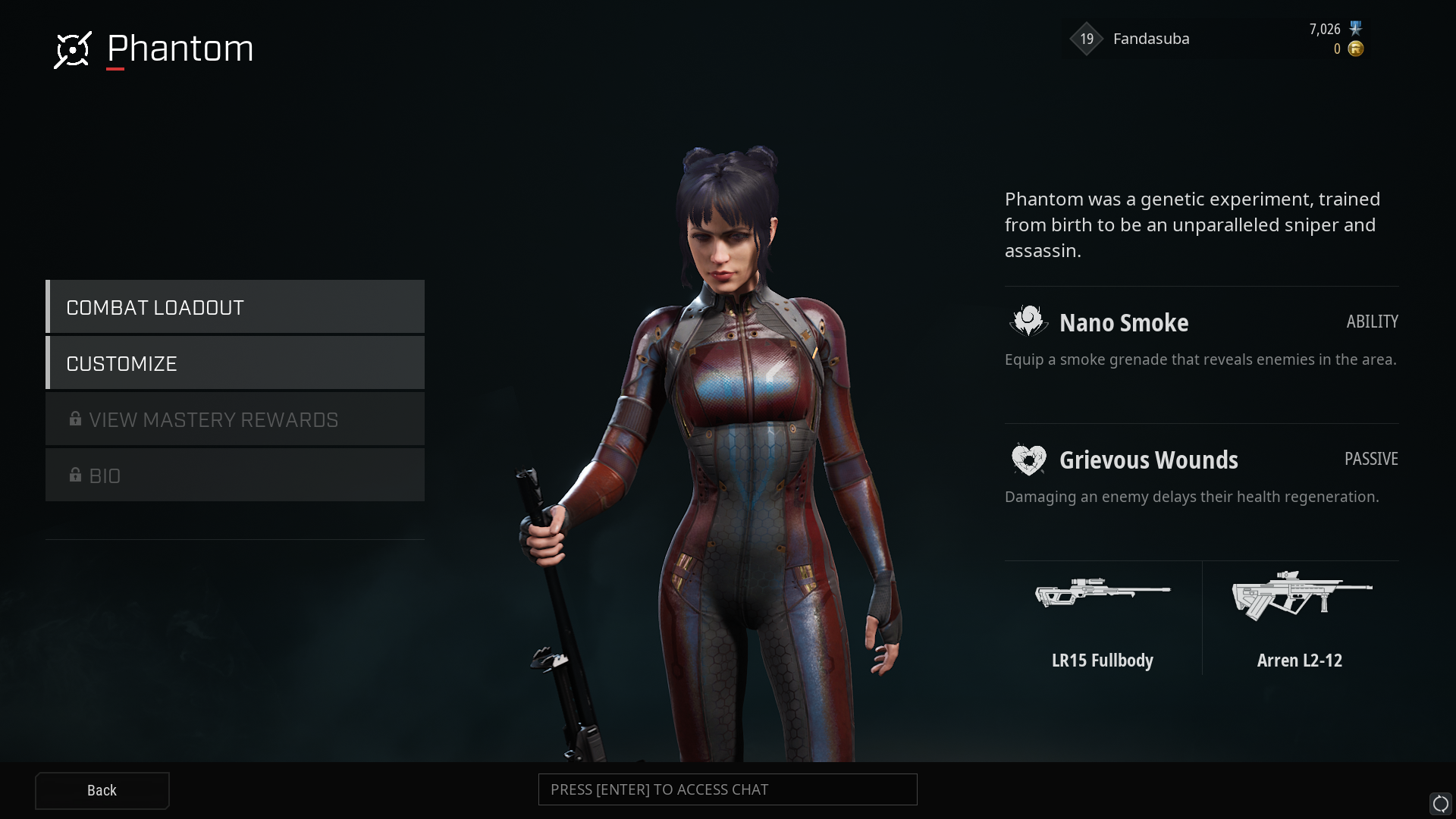 Phantoms role in the game is a little tricky. She is the only sniper in the game, meaning she is the go-to carry for the big clutch players. However, landing headshots is critical. Ideally, Phantom players want to land headshots on opponents in the open; otherwise, the down is relatively useless, especially if other enemies can get the revive or there’s a Saint on the other team. The other issue here is that tagging body shots for 80 damage are relatively impactless. A tagged opponent will just get back in cover and wait to regen their hp unless threatened by one of Phantom’s allies or if Phantom can push with her sidearm.

Additionally, many Rogues can deny vision or force her out, such as Saint’s and Lancer’s smokes, Dima’s and Ronin’s grenades, etc. It is straightforward to counter a Phantom. However, if the player is skilful, or there are no counters working for the other team, then Phantom is one of those incredibly clutch and top of the leader board Rogues that feels like an S tier.

The explosive loving initiator carries cluster bombs, with the option to buy more grenades to unleash hell on sites. Dima is about preventing pushes with timed throws and getting opponents out of cover and into the open. There is a case to be made he can make an even better defender, by cluster bombing sites where attackers attempt a plant. Anyone contending against a grenade from Dima will have to find a safe way out as they do pack a punch. Combine this with the Vampire perk and Dima can become a walking tank. However, all of this is skill-based. Knowing how to position grenades, knowing angles, cooking correctly and being able to get them down from forcing opponents out of cover takes time and practice. Another weakness is most duelists are going to be in his face before a grenade has the chance to do anything. But sooner or later, people will crack Dima, which will only improve his rating. 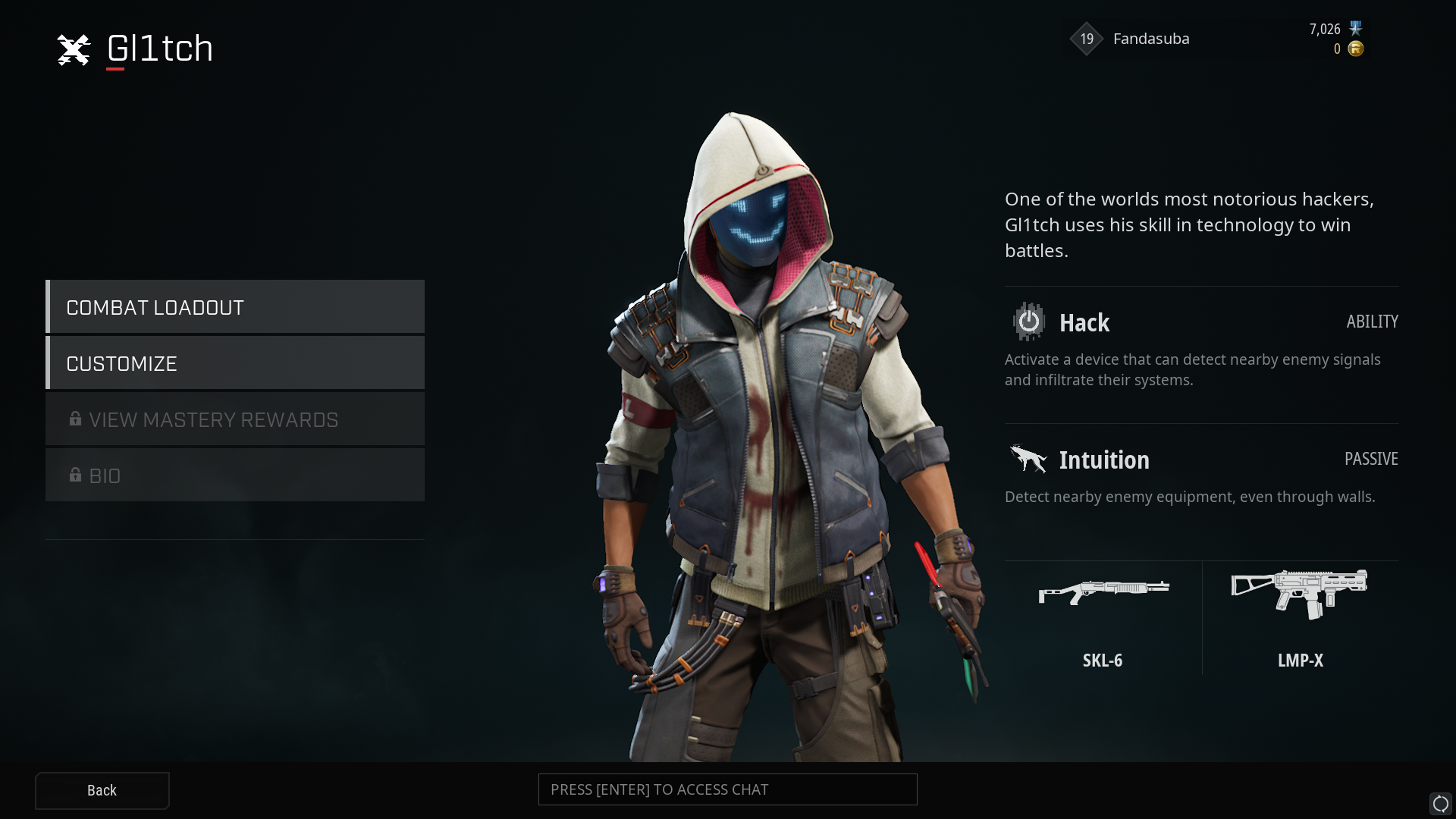 The other initiator also suffers from a similar skill gap that Dima experiences. Gl1tch is about finding nearby electronics and Rogues in his immediate vicinity. The amount of information this can bring to a team is amazing. Entire site pushes can be made at the push of a button, taking out gadgets and disabling opponent abilities for a short while. For the well-coordinated, Gl1tch has a case for an S tier placement. But this once again requires godly coordination. Without this coordination, Gl1tch may as well be the worst Rogue in the game for the average player. With the skill ceiling and need for teamwork, Gl1tch sits in B tier as he is a high skill ceiling Rogue.

Anvil is the static heavy armored control Rogue. His ability is about deploying a colossal shield to take cover behind, popping a window and raining hell. The shield is also useful as a roadblock that is going to take opponents a long time to take down with ammo or massive investment with explosives. Besides, an Anvil can use this on the post-plant to cover a defuse attempt. But once again, players need the practice to get the most out of Anvil. The average player isn’t grasping Anvil’s potential as compared to the outlined A and S tier picks. Anvil will become stronger over time.

Vy right now feels slightly underpowered. Her entire gimmick is about slowing down the opposition, rotting enemies away with poison or halting movement with gas and incendiary grenades. There are many tricks with Vy aswell, such as audio queues from Rogues choking to gas around corners and in cover. There are a lot of ways to get benefit from Vy. However, she is way too difficult to play compared to other Rogues. Right now, Vy seems like a lacklustre Dima. Developers have recently mentioned she will get a buff sometime soon to make her more valuable, but for now, she remains a Rogue to avoid unless you’re a defensive mastermind.

Trench is a solid defender, but there are a few quirks that drop his viability. His HRM is a powerful assault rifle, capable of chipping down assaults before they get anywhere with 24 damage per round to the body. His zone of control is also incredible with his Barbed Wire. Furthermore, the ability to carry 2 Active Protection Systems means any offensive utility will fizzle out. He is by far an excellent defender.

However, Trench has some serious quality of life issues. Barbed Wire also slows himself and his team down. So, this ability needs communication or used in a way where only the attackers suffer from it. Even then, Rogues that use explosives ( there’s a lot of them btw) can destroy an entire wire placement in one go. Sure, it takes down a lethal gadget, but is it worth the trade? Finally, Gl1tch can hack his ADS placements and destroy them in one Q when he’s in range. Trench certainly has excellent ways to counter opponents, but he too is easily countered. You could say this is the definition of balance.

As it stands, Hi-Rez is working on how to improve Trench’s QoL. These changes are solid options to prevent Trench’s Wire from weighing his team down. Only time will tell what improvements Trench will get.

As with most tier lists, this is subject to change as balance changes come into play. The tiers in the article have a theme of separation. S tier is about easy to play, easy to see results. On the other hand, A contains great Rogues that are a tad more difficult to master, while B tiered Rogues are the ones underutilised by the player base but are not weak by any means. Furthermore, the B tier Rogues of this list is mainly due to how players are receiving Rogues. B tier Rogues have the room to grow into S and A tier Rogues when the game naturally evolves. But for now, this is how the player base and current balancing is taking shape.