How to Watch and Understand CSGO 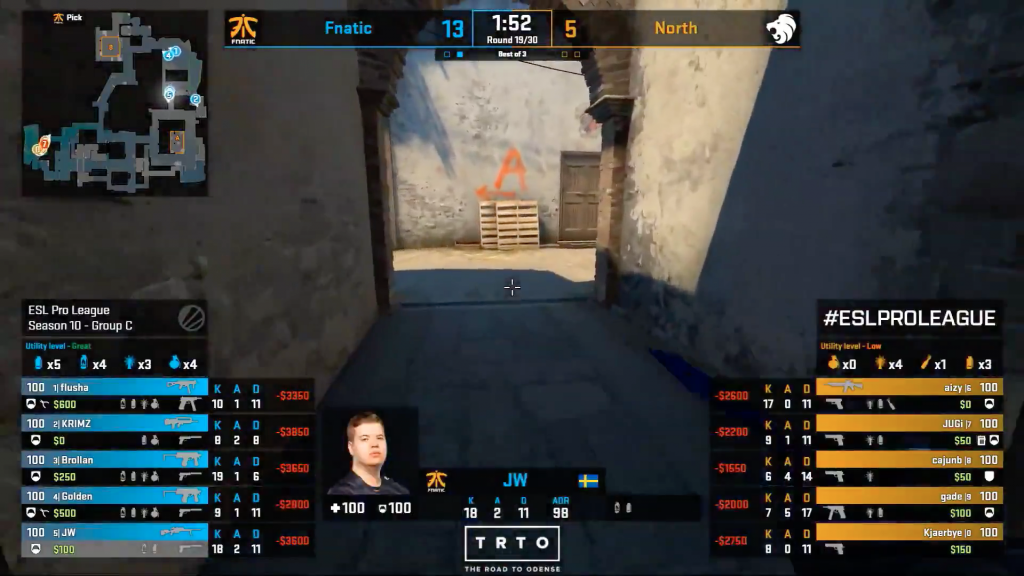 So, you just discovered this great game on Twitch. A stadium filled with screaming fans and a fast-paced game of bomb planting and defending. You quickly got the objective: one team has to put a bomb at A or B and another five mates are going to defend this. Congratulations, you just found Counter-Strike Global Offensive aka CSGO.

But to follow the game as it develops round after round you need to pay attention to all the information which is provided to you on the screen. Don’t be afraid, we got you covered and will help you on your road to becoming an eager fan of CSGO.

Usually, when you tune in to watch CSGO, you will see a screen like this one taken from the IEM Beijing Finals 2019: 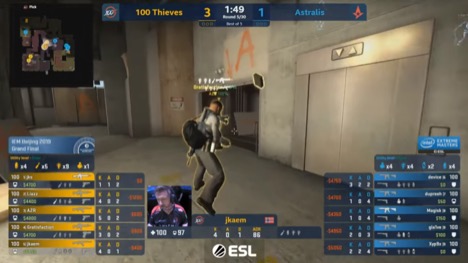 A typical overlay you will see in competitive CSGO.

As event organizers use different overlays, this may differ from event to event. But the same information is presented, regardless of who is doing the casting. Let’s have a closer look at all the elements on display.

Right in the middle of the screen, you will see the team names and logos. The yellow font indicates which of them are playing on the attacking side, the Terrorists, and the blue color shows the Counter-Terrorists or defending side. In this example, 100 Thieves have won three rounds so far and Astralis just one.

The score of 100 Thieves vs Astralis.

In the center, is the remaining time of the round. The clock starts to tick down from 1:55 and after the bomb plant, the CTs have 40 seconds to defuse the bomb on the site. This is shown either with another countdown or with a colorful bomb animation. We find our teams in the 5th of 30 rounds – whoever wins 16 has won the match. If both reach 15 an overtime containing six rounds will start.

Can you spot the “Best of 5” information? The dots under the actual score will be filled squares if any team has already won a map. This allows you to easily spot the overall standing with just one glance.

In the upper left corner, we see the minimap – an important element for the players. A great addition from some organizers is a small insert to show which team selected the current map. Here it’s the pick of 100 Thieves, who are represented by the yellow dots on the map. Those dots have numbers that represent certain players in the game.

The minimap can be a great way to understand CSGO.

What else can you see on the minimap? One dot (number 5) has a white circle around. This is the player we can see on the big picture. The white cone is his field of view. Another item you may see on most minimaps is the bomb itself. The attacking team will drop the bomb at the start of the round to pick it up later when they established a plan for the round.

Of course, you can see both the bomb sites – A and B – and the players moving around on the minimap. They will use utilities like smoke grenades, incendiary grenades and Molotovs to hinder the opponents to get into good positions. These usages are typically visible on the minimap too.

As you may notice, the minimap is a great tool to see what’s happening all over the map. If you are watching top teams, you can identify some strategies due to players positioning and movement. It is great to see them doing choreographed plays like perfect dancers.

In the bottom middle of your screen, you will find details on the current player in focus. In this example, it is Joakim “jkaem” Myrbostad from Norway, part of the 100 Thieves roster. Again we see the yellow color of the Terrorist side.

jkaem is currently the player focused on this broadcast.

Below his picture, which is part of broadcasts mainly on offline events, we find his health (100 HP) and armor (97%) – which is indicated by the helmet

Below the name, you see K:4, A:0 and D:1. That means that jkaem has four kills (K) on enemies so far, zero assists (A) and died (D) once. For an assist, he has to hit an enemy with a decent amount of damage before another player will bring him down to zero.

The ADR:86 tells you that jkaem has dealt average damage per round of 86. On the right side, we see the symbols of his utilities: one Molotov, one smoke grenade and two flashbangs.

In the very beginning, the player changes may be too fast for you to see every detail. But after watching some games, you will get used to this information and with just a quick glance you will identify what you are looking for.

On the bottom corners of the screen are the team boxes. This list all players with names and additional status. 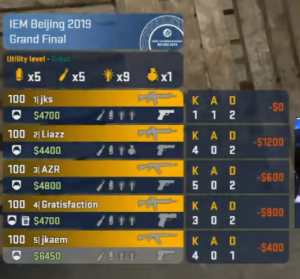 You can find all of the player stats for a game of CSGO here.

That is a lot of information and stats — so let’s have a look. On top of the box, we find the team utility (Utility level). From left to right you see five smoke grenades, five Molotovs, nine flashbangs and One HE (high explosive) grenade. It is rated “Great” as every player bought the maximum of four grenades.

The yellow-colored bars contain the health (100), the player name, a number that corresponds with the number on the minimap and the main weapon. Directly below the names in the second row is the armor (all with helmets), the money the player owns, the unused utility and the pistol.

The box on the right side contains the kills, assists and deaths overview, as well as the money the player spent right before the round starts (red minus amounts in dollars).

In this picture, Sean “Gratisfaction” Kaiwai carries the bomb — between armor and money is the bomb symbol. Did you notice the bright bar on jkaem at the bottom of the list? This indicates that this player is shown in the main picture.

During the game this team box will change to something like this: 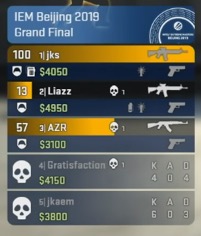 This player box changes during gameplay.

Justin “jks” Savage is at full health and is carrying the bomb. Gratisfaction and jkeam have died, as indicated by the large skull. The smaller skulls next to their names show the kills players have recorded in this round. So, three players on the other team are down at the moment.

Just to give you an impression of how these overlays may look like, we assembled some CSGO matches on the map Vertigo. 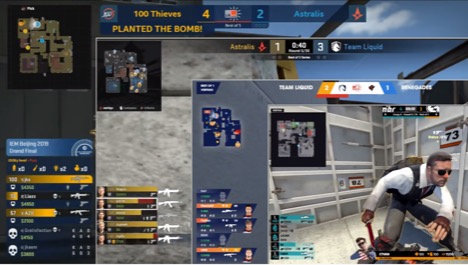 Though the presentation can look different, all the same information will always be presented in CSGO.

From left to right:

At first, they might look different, but overall you will discover the main structure real quickly. All the elements mentioned above are here but the branding and style of every event organizer is different.

Why is money so important? Well, in CSGO winning a round will give every player on the winning team more money than their opponents will receive. This is an advantage because more money means better weapons and more utilities. No money means that players have to save to afford another gun and/or armor. Therefore, you should keep an eye on the team economy as one of the main factors of winning rounds.

A look at the economy you may see on a CSGO broadcast.

This is the reason why ESL shows extra stats during some buying phases. Overlays like this show the resources of every team and if their equipment will be on par.

How can players or teams earn money? Obviously, you will get more money than your opponent if you win a round. Losing a round is bad, as the enemy team will use the advantage to get way ahead of you in spending by spending on equipment. But with a built-in comeback mechanism, losing more rounds consecutively will raise the amount the losing team gets. After five lost rounds, every player will get $3400, which is about the same as the winning team will get.

Other ways to earn money are:

Of course, the amount of money in the team pot will determine the buying strategy. You will often hear commentators talking about eco rounds, half-buys and full-buys.

An eco-round is a way of saving money for later times, so players buy close to nothing. Maybe a smoke or flash grenade but usually no guns or other expensive items. If you watch a game of CSGO, you will see the team who lost the first round (aka the pistols round) have an eco-round.

If a team goes for a half-buy (or force-buy) they will spend the little money they have instead of saving. The idea is to increase the chances to win the next round but it is risky. Losing a half-buy round will be followed by at least one or two full eco-rounds with no money to spend. You may find teams going for half-buys at the last round of a half as there will be an economy reset after the round.

Full-buy is the big-spending time for the players. They may choose their favorite weapon, equip with full armor and helmet, getting up to a maximum of four grenades per player. There should be enough money in the pool to get at least one AWP, depending on the map and side.

Economy is a special part of the game and teams are doing different strategies on different maps and sides. Having or not having money to spend will influence the game plan in every round and will show how the team prepared for the actual tournament.

Now you are prepared to watch the next CSGO tournament with top tier teams and hopefully, this article helps you to a better understanding of what’s going on. If you want to dig deeper into strategies and gameplay, check out the guide section right here on Hotspawn. Have fun!

Share
Joe started playing games in the pre-C64 era and keeps it up until today. Due to his professional background, he loves to play with numbers, statistics and to gain some insights about players performances.
Follow me