How To Team Fight in League of Legends 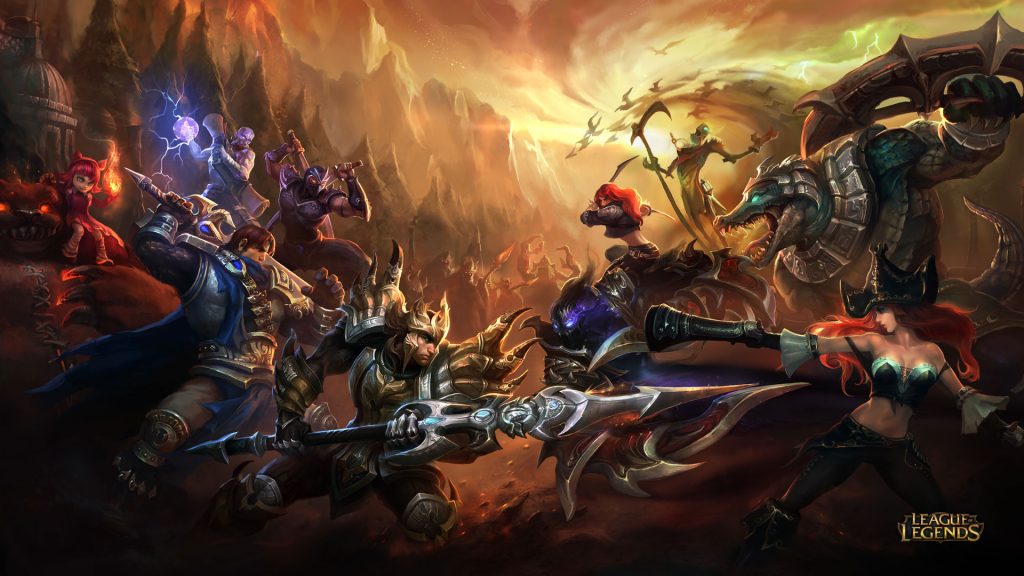 It can be hard for even the most experienced League of Legends players to process the chaos of some team fights. (Image courtesy of Riot Games)

Team fights begin when one or both teams engage. Typically this kicks off with a champion possessing crowd control walking up to the enemy team and using it on an enemy champion. Engage tools are abilities that can reliably be used to start fights, and identifying them is the first step to a successful team fight. Some examples of great engage abilities include Ornn’s Call of the Forge God, Malphite’s Unstoppable Force, and Zac’s Elastic Slingshot.

Area of effect speed boost abilities are also a way for teams to start a team fight. Although these speed boosts don’t immediately lock the enemy in place, they force the opposition to fight as your team will be moving faster, forcing the enemy to fight or be killed as they attempt to retreat. Some examples of this include Sivir’s On the Hunt and Karma’s Inspire.

The best time to engage will almost always be when your team has a numbers advantage. Even if your team is down kills and gold, having an extra champion or two that can participate in the fight is often enough to swing the fight in your team’s favor. This means to engage if you see an enemy that doesn’t have teleport and is far away from the rest of their team, assuming your team is grouped together. This principle also applies for smaller number fights: 4v3, 3v2, and 2v1.

Assuming that the enemy team doesn’t always allow openings like this, you will also have to fight at even numbers. This doesn’t mean that the fight has to be on even terms. Keeping track of ultimate timers and summoner spells cooldowns can be important to winning team fights. Engaging while your team has their ultimates up and the enemy does not can be the difference in the fight. Similarly, having summoner spells up — particularly on your carries — can be crucial.

The best way to engage when possible is from out of enemy vision. Use Control Wards and Oracle Lenses to sweep enemy vision away from the enemy dark areas of the map. This is especially useful around neutral objectives like drakes and Baron. Deny enemy vision, establish your own vision around the area, and spring a trap when the enemy team approaches.

When they get close, use your crowd control on the most important champion that can be reliably targeted. Sometimes this will be a carry stepping too far forward, but most often it will be one of the top laner, jungler, or support leading the way.

Make sure not to overlap your crowd control on a single target. Let the existing crowd control effect run its course before applying another one to maximize lockdown time.

After the fight begins, you must constantly be evaluating what target you should be hitting. Some champions will dive the enemy backline at all cost. Others will hit the tanks in order to stay alive and dish out damage as long as possible. The general rule of thumb is as follows:

As the fight goes on, it is obvious that you want to maximize your damage and minimize your damage taken. To accomplish this, kiting is an important part of team fighting. Kiting is when you walk away from enemy threats but still weave in auto attacks and spells while you move away.

It applies mostly to carries but can be done by tanks as well. After crashing the backline, tanks kite back to their own carries, if they’re still alive. Often sporting a large amount of health regeneration, it allows them to heal back up and possibly re-enter the fight.

As mentioned above, marksmen will almost always be kiting during fights. They need to be dealing damage constantly and do not have the ability to soak up a lot of damage from the enemy.

Mages tend to kite in a different way. They enter the fight when their abilities are up, use them, and then exit the fight until they get their abilities off cooldown again. For champions with very high cooldowns, these mages may focus on dealing as much damage as possible in their spell rotation without worrying about kiting.

Team fights often do not last until one team is wiped out for an ace. As soon as a fight looks unwinnable for a team, they will attempt to disengage the fight. More than just running away from the enemy, disengaging involves using your abilities to slow your enemies and stop them from being able to follow your team.

Like engaging, you can use several tools to disengage. Speed boost abilities will allow your team to outpace the enemy on the retreat. Using zone control abilities that slow when enemies walk across — such as Zigg’s Hexplosive Minefield and Graves’ Smoke Screen — serve the same purpose.

Displacement spells are especially useful in disengaging fights. Abilities such as Gragas’ Explosive Cask, Trundle’s Pillar of Ice, and Janna’s Monsoon are great at pushing your enemies away to disengage a fight. They also can discourage enemy follow-up from the threat of separating them from their allies.

It is possible that after a team disengages a fight, they will then choose to counter-engage. Teams will do this because they gained some kind of advantage in their disengage and now feel they have the upper hand in another fight. Examples of why teams would disengage and then counter-engage include: stronger health regeneration giving them an edge, key abilities come back off cooldown, or an ally is entering the fight to create a new numbers advantage in the ensuing fight.

The tools to use for counter-engaging are the same as the original engage. The big difference, however, is that the enemy is likely down a number of abilities that they would not be on an initial engage. This means “softer” engage tools that likely could have been countered in an initial engage will now work for a counter-engage. Something as simple as a slow on an enemy champion can be enough to kick off another fight.